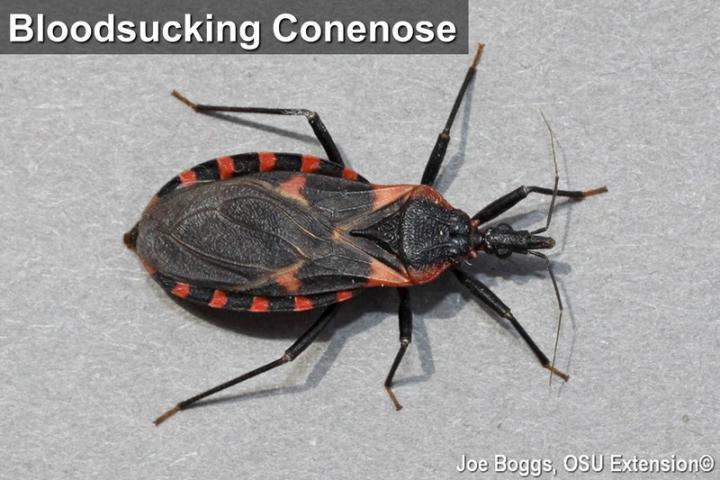 I met Cindy Meyer at her OSU Extension, Butler County, office yesterday to take pictures of a bloodsucking conenose (Triatoma sanguisuga) that had been collected by a concerned homeowner.  This is the second time I've taken pictures of this "kissing bug" species in Ohio.  The first time was in 2010 when I found a specimen crawling on the outside of my home in Butler County.  According to a paper published in the Ohio Journal of Science in 1960 titled, "Arthropods of Medical Importance in Ohio," the bloodsucking conenose is found in southern Ohio.  So, finding the bloodsucker in Butler County is certainly not newsworthy, nor should it cause concern.

However, last year in late-November, kissing bug hysteria swept through Ohio as well as several other Mid-Western States and some Mid-Atlantic States.  The panic grew from irresponsible news media reports fueled by ill-informed social media posts.  One news media headline captured the confusion, "'Kissing bug' brings deadly parasite to Tri-State."   The parasite is the protozoan Trypanosoma cruzi that causes the potentially deadly Chagas disease.  Of course, the protozan had not found its way to the Tri-State area in Ohio, or any area in the U.S. outside of where it had been previously documented.

While the name bloodsucking conenose sounds like a derogatory epithet, it accurately describes what the insect does and what it looks like.  The bug uses its piercing-sucking mouthparts attached to a cone-shaped nose-like structure at the front of its head to bite and suck blood from animals including people; thus the common name and the specific epithet "sanguisuga" which means "blood sucker."

There are several species in the Triatoma genus, collectively referred to as triatomine bugs that are known as "kissing bugs" because they tend to bite near a person's mouth.  The bug gets away with this cheeky behavior by biting people while they sleep.   Bites are sometimes painless, but may eventually cause a severe reaction.  Kissing bugs may in fact harbor Trypanosoma cruzi in their gut.  The bugs do not inject the protozoan when they bit; they release the protozoan from their other end when they defecate.  Infection occurs if the protozoan enters through bug feeding wounds or through mucus membranes.  The resulting Chagas disease is nothing to sneeze at; it can be deadly.

However, Ohioans shouldn't lose sleep over contracting Chagas disease unless they travel to more southern climes.  Contracting the disease requires more than coming in contact with a kissing bug; it must be a bug that's carrying the protozoan that it picked-up from an infected victim.  This is not the case in Ohio.  The Centers for Disease Control and Prevention does not list Ohio among the geographical areas where Chagas disease has been confirmed.  The highest concentration of the disease is in central and South America with some cases reported in southern Texas. 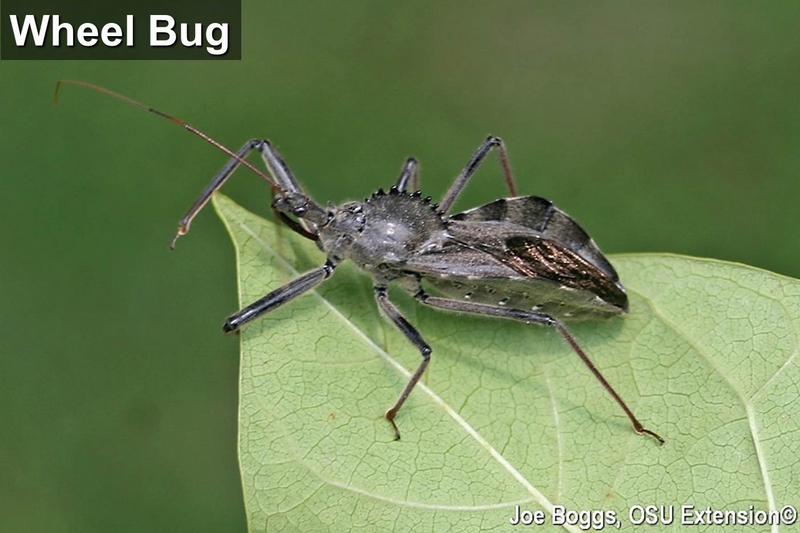 On a final note, entomologists at Virginia Tech viewed all of the purported kissing bug images sent to a local news media outlet during the panic last November.  In every case, the true bug was the wheel bug (Arilus cristatus).  The wheel bug and triatomine bugs are about the same size and both belong to the "assassin bug" family (Reduviidae) so they share some family traits.  However, wheel bugs have a distinctive half-cog-like structure on top of the thorax (back), thus their common name.  They do not feed on people; they suck the life out of other arthropods, most often caterpillars and sawfly larvae.  Adults are common in late fall.  It's speculated that the panic was sparked by web-based misidentifications that were then posted on social media to be re-posted by others setting off a spiraling cycle that eventually caught the attention of some news media outlets that failed to "fact-check" before reporting.