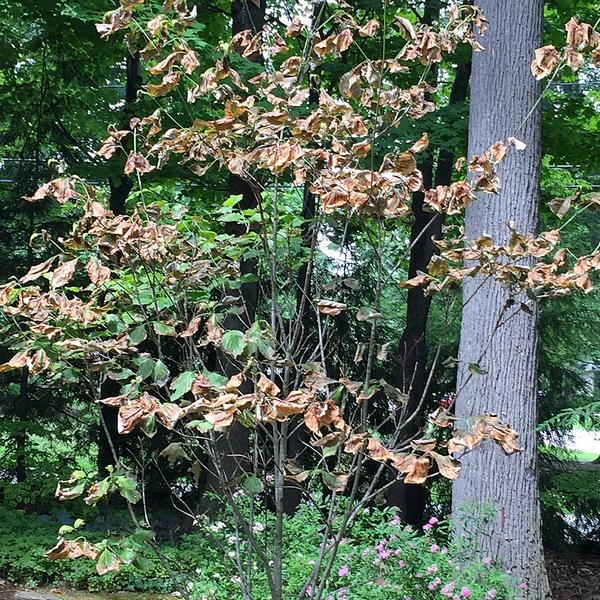 This digital image of dogwood arrived with the e-mailer asking if the problem was leaf scorch.   Damage seemed too great and too complete to be simple leaf scorch due to some transient heat stress. Further information indicated that someone had suggested that the plant needed potash and the e-mailer applied it and then asked if too much could be applied.  Well, yes. As with anything, even something as useful as fertilizer, “the dose makes the poison.”

The sender had applied 2 pounds of a 6 pound bag of a consumer-product potash (0-0-60) fertilizer. So at 2 pounds of a this 60% potash product, 1.2 pounds of potash were applied to the base of this small dogwood tree. This is way too much, but I decided to Phone-a-Friend and Ask-the-Expert by contacting Joe Boggs of OSU Extension Entomology Department and Hamilton County.  He concurred this was too much and elaborated that:

“It’s not just the potassium (K) by itself that’s the problem.  The K in the plant fertilizer form of potash is combined with chlorine (Cl), so it exists as potassium chloride (KCl).  This fertilizer is sometimes called “muriate of potash.”  Potassium chloride acts just like sodium chloride (NaCl = table salt).  In fact, if you use "Lite Salt" on your food, 50% of the product is KCl.  So, when 2 lbs. of potash was applied around the dogwood, the result was just like applying 2 lbs. of table salt; the dogwood would be over-seasoned to death.”

By the way, “the dose makes the poison” or sola dosis facit venenum, is a basic principle of toxicology. The saying is thought to be first coined by Paracelsus (1493-1541), a Swiss philosopher and botanist who, among other things, is credited with doing the Greeks and Romans one better by encouraging the use of direct observations of nature rather than consultation of ancient texts, helping usher in the philosophical revolution of science.  He is also credited with the naming of zinc!