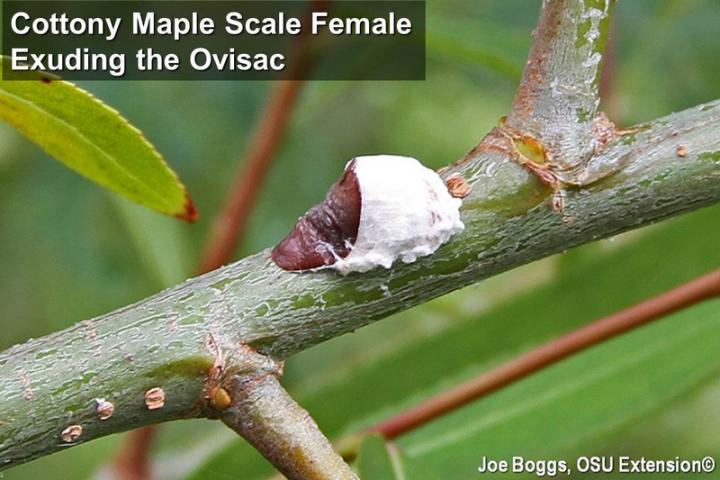 Earlier this week, Eric Richer (OSU Extension, Fulton County) sent me an image of a maple with almost all of the branches covered with Cottony Maple Scale females that were extruding their elongated, white, cottony ovisacs.  The oval-shaped dark brown females remained highly visible with their ovisacs peeking out from beneath their bodies.  The ovisacs expand to look like 1/4" diameter cotton balls on the branches of their host plants.  The scale has a very wide host range which includes their namesake host as well as ash, basswood/linden, black locust, dogwood, elm, euonymus, hackberry, honey locust, oak, poplar, and sycamore.  Joe found the scale on viburnum.

Populations of this "soft scale" can build rapidly with each ovisac containing over 1,500 eggs.  Once the eggs hatch, the first instar nymphs (crawlers) travel to the underside of leaves.  As with all soft scales, the nymphs insert their piercing-sucking mouthparts into a phloem vessel.  Their primary targets are the various amino acids that are dissolved in the sap; however, they must suck-up a large volume of sap in order to extract the small quantity of amino acids contained within the sap.  Once they process the sap, the excessive liquid is discharged in the form of sticky, sugary, "honeydew" that drips from their anus onto branches, leaves, understory plants, lounging gardeners, etc.

Although high populations can occasionally cause branch dieback on stressed plants, serious damage is rare.  The main challenge is the copious quantity of honeydew produced by the nymphs; it is common for the sticky material to become colonized by black sooty molds to produce an unsightly mess.  The nymphs mature into adults in late summer and the winged males mate with the wingless females.  After mating, the females crawl back to twigs and branches where they spend the winter.

Cottony maple scale is sometimes mistaken for Cottony Maple Leaf Scale (P. acericola).  Both scales produce white, cottony ovisacs, and both have wide host ranges; however, as its common name implies, cottony maple leaf scale produces its ovisacs on the underside of its host's leaves.  If control of either these soft scales is required, both can be managed with fall soil drench or soil injection applications using imidacloprid (e.g. Merit, Xytect, etc.), or spring soil drench or foliar applications of dinotefuran (e.g. Safari).