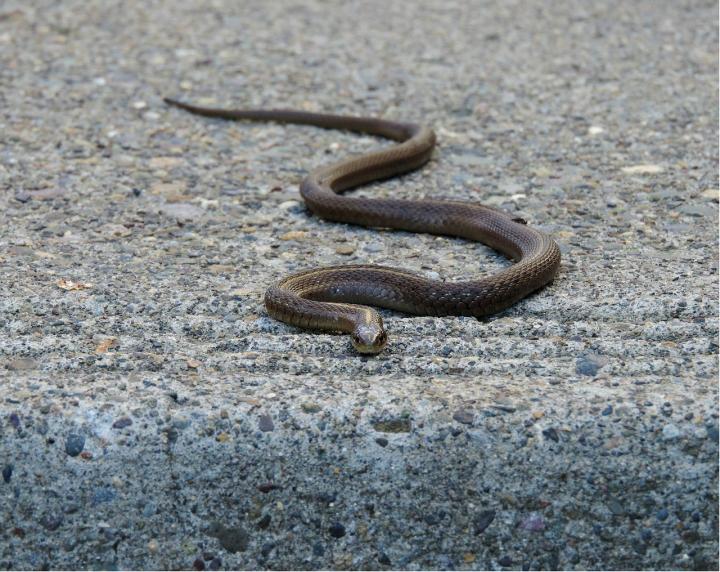 SSSSSSSSSNAKES IN THE GARDEN. It is not uncommon this time of year to encounter a slithery visitor in gardens, landscapes, and backyards. There are several species of snakes happy to live their lives in backyards, but one of the most common is the eastern gartern snake. Named for the 3 light stripes that run along the length of its black, brown, gray, or olive body, the garter snake is sometimes nicknamed the 'garden' snake because that is where unsuspecting gardeners often encounter them. The stripes running vertically along the length of the snake's body resemble the once stylish sock garters worn by men. While it can be startling to encounter a snake while weeding or planting, if their presence can be tolerated, garter snakes are doing the constant gardener a favor. They feed on worms, slugs, insects, and small mammals that may otherwise be feasting on garden plants and flowers.

Garter snakes are most active during the day and on sunny summer days are often found basking on rocks, sidewalks, decks, or patios. On hot days and when sleeping, they retreat to sheltered areas such as under foundations, rocks, logs, stumps, or porches. There are no repellents that effectively work to keep snakes away. The best approach, aside from sharing the garden with them, is to eliminate denning and sleeping sites (rock or log piles) and shoo them away from basking areas. They are rarely aggressive and habituate to humans easily. Some gardeners find relief using glue traps to capture and remove snakes from around the home.

The common watersnake, on the other hand, is not a snake that should be picked up without the expectation of a strong bite. The coloration of this snake, which prefers streams, creeks, and other bodies of water, can sometimes cause it to be mistaken for a northern copperhead, one of Ohio's 3 venomous snakes (the other 2 are the timber rattlesnake and eastern massasauga rattlesnake. The northern copperhead has a distinct triangular head that the watersnake lacks, and is not common among well-settled areas. Because of the common watersnake's preference for water, it is also often mistaken for a water moccasin, a venomous snake that does NOT occur in Ohio.

While it would be rare to encounter a venomous snake while gardening, never disturb or handle a snake without first determining the species and if it is venomous. Other snakes found around the home are the midland and northern brown snake, eastern milksnake, and gray ratsnake (formerly known as the black ratsnake). For help identifying Ohio snakes, see the Division of Wildlife Reptiles of Ohio Field Guide.