Overwintered Calico Scale Females are Puffing Up and Dripping Honeydew 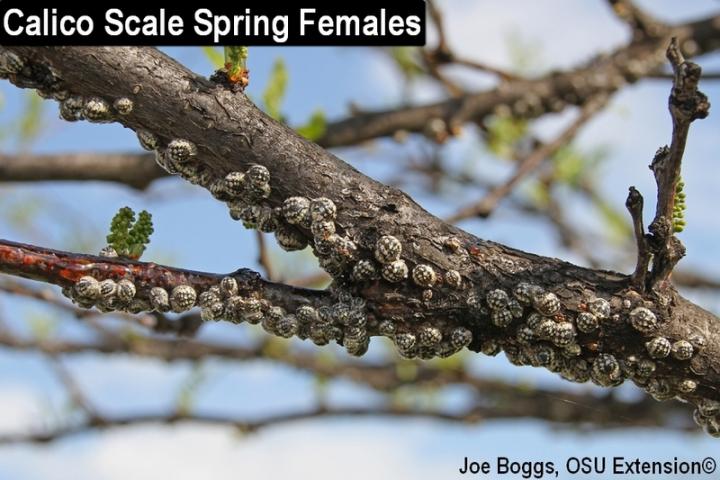 Overwintered calico scale (Eulecanium cerasorum) females are now "puffing-up" and pumping out impressive quantities of clear, sugary honeydew in southwest Ohio.  This is a non-native "soft scale" meaning that mature scales are protected by a soft shell.  The scale's common name comes from the starkly contrasting calico pattern of black-and-white markings on the hemispherical-shaped shells of mature females.  The mature females measure about 1/4" in diameter and their distinct markings make them easy to recognize, particularly on bark and branches that are blackened by sooty mold. 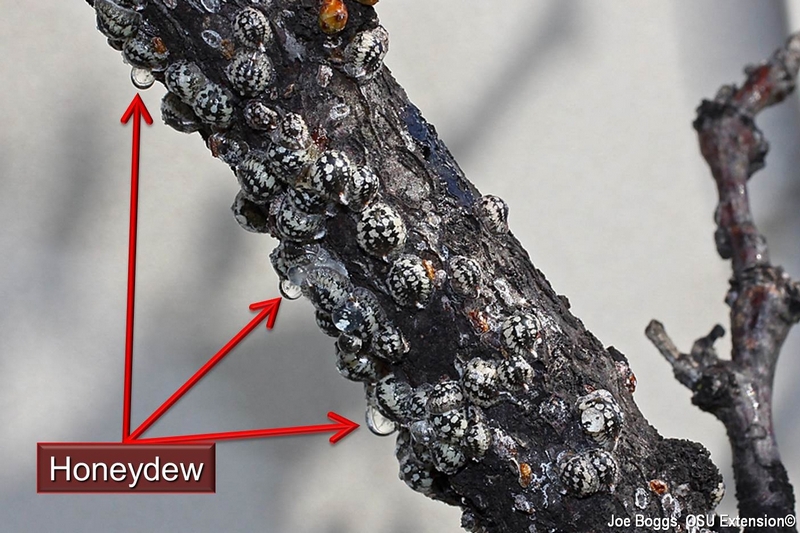 As with all soft scales, calico scale adults and nymphs (crawlers) feed by inserting their piercing-sucking mouthparts into phloem vessels to extract amino acids that are dissolved in the sugary plant sap flowing through the vessels.  They discharge excess sap from their anus in the form of sticky, sugary "honeydew" that drips onto the leaves, stems, and branches of scale infested trees as well as understory plants, parked cars, sidewalks, lawn furniture, and slow-moving entomologists.  In fact, my hat, shirt, glasses, and cameras quickly became speckled with the sticky scale poo goo while I was photographing a heavy infestation yesterday. 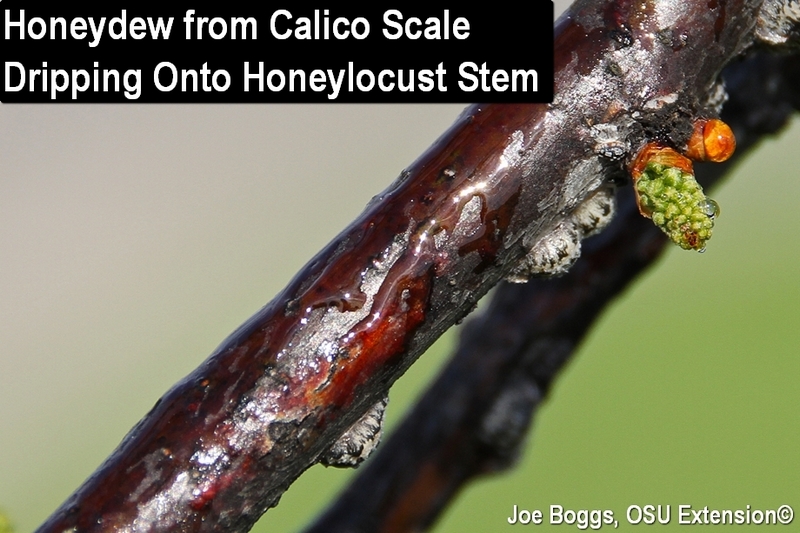 Calico scale has one generation per year and overwinters on twigs as partially developed nymphs.  As spring progresses, the nymphs feed, molt, and mature into globular adults.  The current females will die and turn brown once they produce eggs in late spring to early summer.  Eggs hatch at 748 GDD and 1st instar nymphs migrate to the undersides of leaves where they attach themselves to veins to suck fluid from phloem vesicles.

The scale can infest a wide variety of deciduous trees including dogwood, honeylocust, magnolia, ornamental fruit trees, sweetgum, and witchhazel.  One of most obvious symptoms of a heavy infestation is blackened branches created by honeydew deposits becoming colonized by black sooty molds.  Although sooty molds cause no harm, the do give infested trees and unsightly appearance.  Calico scale is seldom a direct killer of established landscape trees; however, heavily infested trees may suffer branch dieback and the accumulated stress caused by substantial sap loss may cause them to succumb to other stress related factors.

Unlike many other soft scales, calico scale is not controlled with either dormant oil or summer oil applications.  An insecticide efficacy trial conducted in 2014 in southwest Ohio targeting summer crawlers attached to the underside of leaves on July 25 revealed that Onyx (bifenthrin) provided the best suppression with 0.8% survival of the nymphs compared to 63% on the untreated trees.