Plant of the Week - Pokeweed 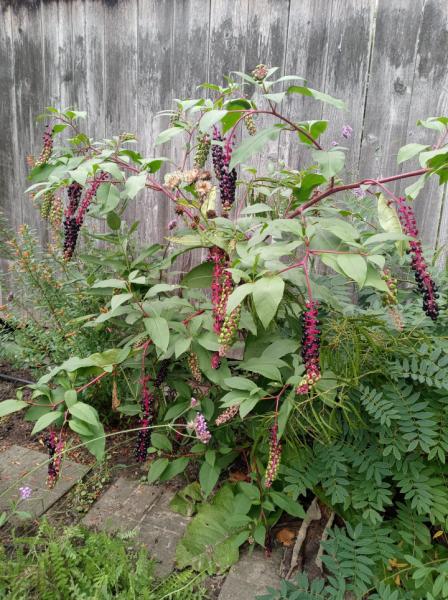 Pokeweed (Phytolacca americana) is a native herbaceous perennial that can grow 4 to 9 feet tall. It is considered to be an agressive plant by some because of its ability to self-seed and become numerous in numbers and have weedy tendencies. While pokeweed is an adaptable type of plant, it does prefer a medium moisture, well drained site in full sun to partial shade. It does like and will perform better in a consistently moist soil, but it will tolerate short periods of drought.

The simple leaves tend to be a lighter shade of green, and will give off an unpleasant aroma when crushed. If only BYGL had scratch and sniff capabilities, or maybe not!

The leaves are attached to stems that are shades of reds and purples.

As you can see, stems can grow to a substantial size in a single season as shown in the photos above and below.

If you cut lengthwise down the stem, you will find a chambered pith or cross section.

Pokeweed flowers are small and could be called insignficant if not looked at closely, but only because the fruit is more colorful, larger and much more obvious.

Fertilized flowers soon produce the fruit that most people recognize. The berries on born on pink stalks and stems and begin as a light shade of green. Upon close inspection, the fruit resembles minature stacking pumpkins - don't you agree?

The fruit then turns from green to mauve, and finally to a dark purple as the fruit matures.

Despite what many could consider very attractive features, the plant is poisonous and can have be abundant prodigies. Some may even go as far and call it invasive, but because it is a native plant, it cannot be termed invasive.

Pokeweed has long been used as food and medicine, although all parts of the plant are considered poisonous. Young leaves are eaten after boiling in two changes of water to remove toxins. A wide variety of chemicals have been isolated from pokeweed that have antiviral and other medicinal properties. The berries are poisonous to humans, but are commonly used to make dye, and are a fall favored food for migrating birds.

It is always fun to learn more. In this case about a plant that some people love, and some people love to hate. As we were gathering information for the BYGL, we ran across an article written by Joseph Mooney and posted on the University of Michigan's Matthaei Botanical Garden and Nichols Arboretum website (https://mbgna.umich.edu/native-plant-of-the-week-american-pokeweed/). He ended his native plant of the week post with: enjoy pokeweed from a distance, but think twice before planting it in your garden.

For additional information on pokeweed, check out this NC State FactSheet:

If pokeweed in your world is a weed and needs to be managed, check out this FactSheet from Penn State: