Lace Bug Damage is on the Rise 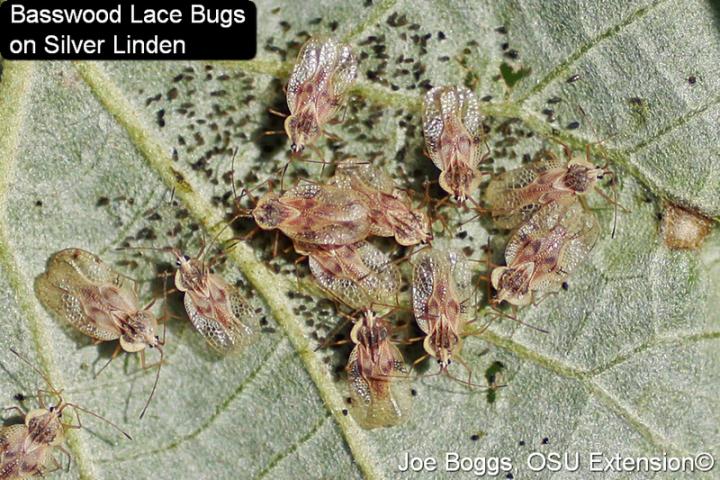 This is the time of the season when the characteristic chlorotic leaf spot damage (= stippling) from Lace Bugs (order Hemiptera; family Tingidae) that feed on deciduous woody ornamentals as well as a few herbaceous perennials becomes very evident.  These small plant-sucking insects are so named because of the lace-like pattern of the veins and membranes in their wings which are held flat over their body. 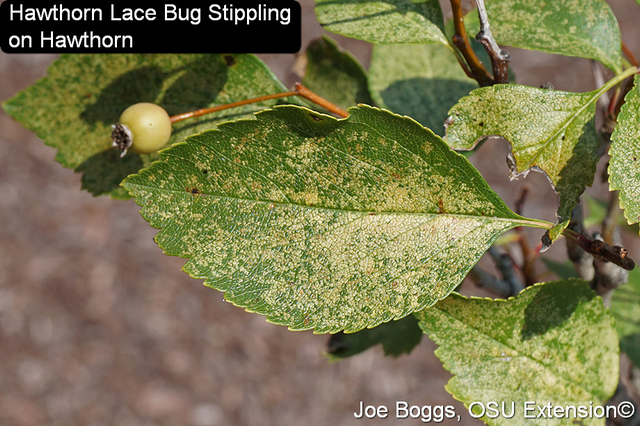 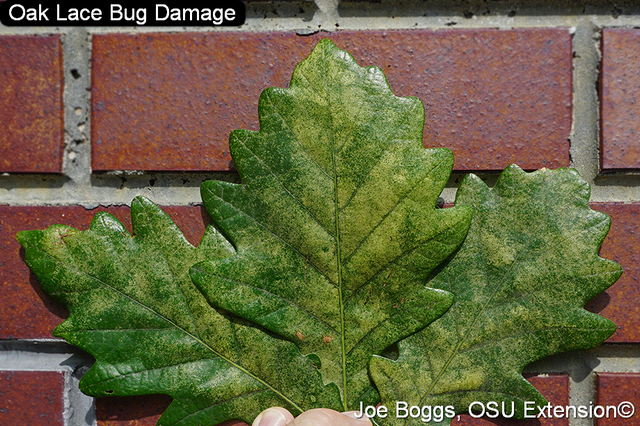 Most lace bug species found in Ohio live on the lower leaf surface of their host plants.  Flipping leaves over at this time of the year may reveal all the incomplete metamorphic life stages.  Adults are tiny measuring no more than 3/16” long.  The immatures (nymphs) are even tinier and appear to be covered in small spikes. 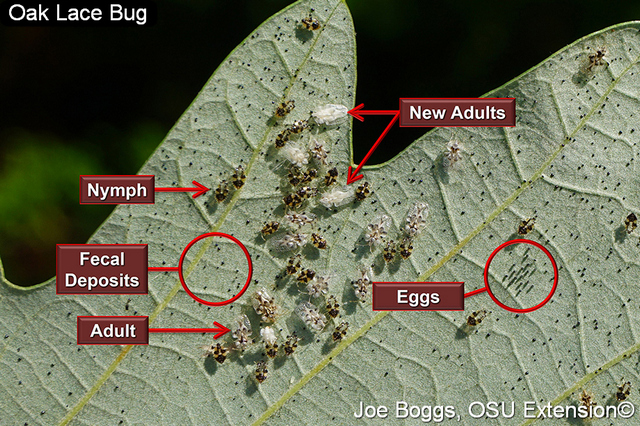 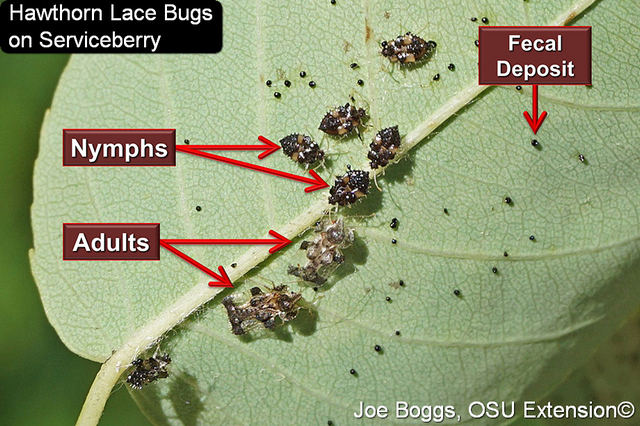 The oval or flask-shaped eggs of most species are black which may cause them to be confused with fecal spots.  However, the fecal spots are randomly distributed while the eggs are grouped in loose clusters. 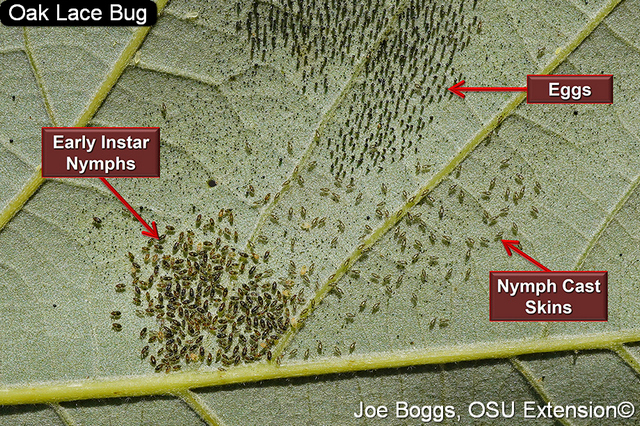 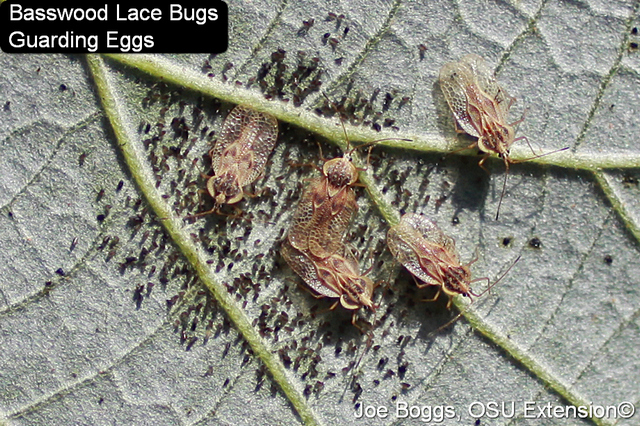 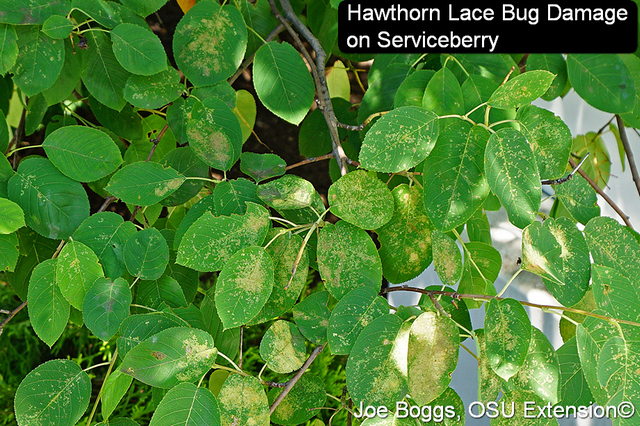 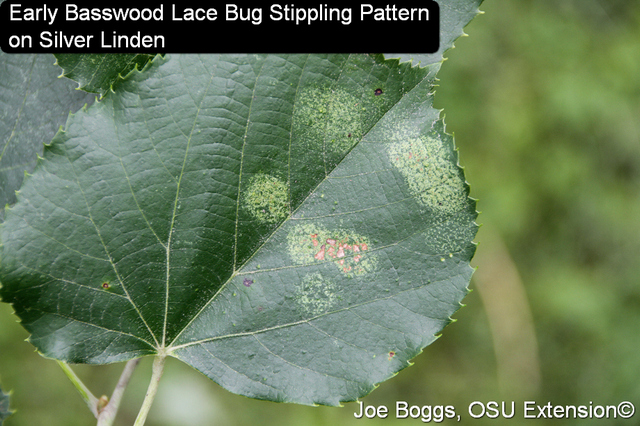 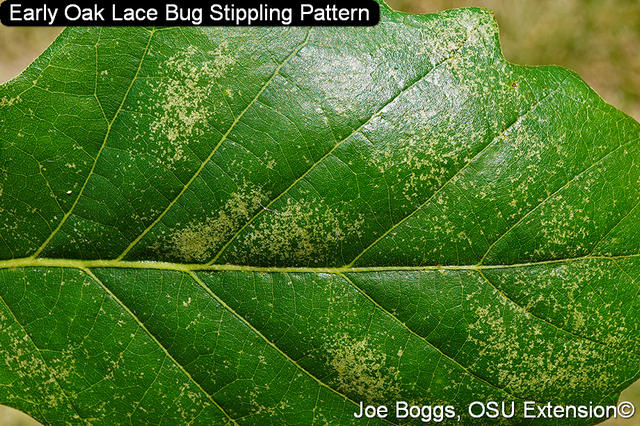 Eventually, the stippling will coalesce to produce large white patches causing leaves to look "bleached-out."  As the damage progresses, portions of the leaf, or entire leaves, will turn yellow to copper brown. 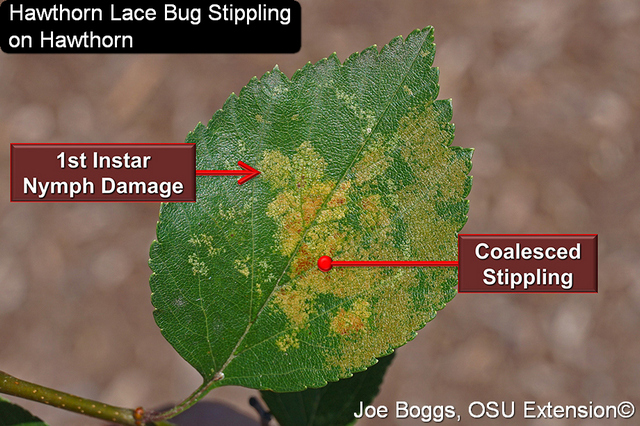 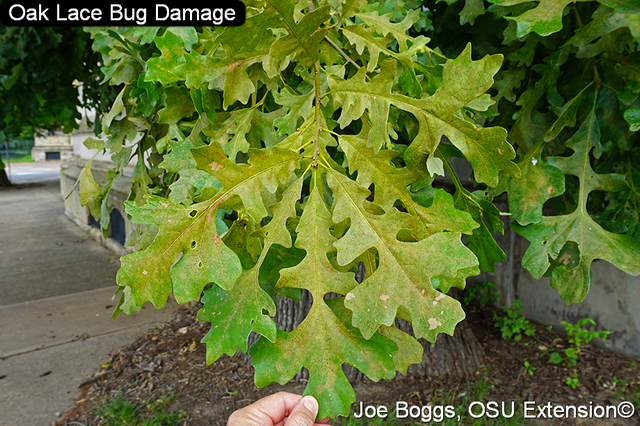 High lace bug populations can produce enough leaf damage to cause early leaf drop, branch dieback, and even the death of small trees and shrubs.  Many lace bugs in Ohio have 2 to 3 generations per season with the leaf damage ramping up with each successive generation.  This means it's critical to manage lace bugs right now to halt further damage over the rest of the growing season.

Lace bugs can also be a serious nuisance pest.  They have a penchant for dropping from heavily infested trees onto unsuspecting hikers, picnickers, and patrons of outdoor bars and cafes.  They don't feed on people, but they can use their piercing-sucking mouthparts to deliver a pinprick bite particularly if they fall between a person's neck and shirt color.  Adding insult to injury, floating lace bugs can ruin the experience of sipping an Old Fashioned in the shade of an infested oak tree.

Heavy oak lace bug (Corythucha arcuata) damage recently drew my attention to oaks (Quercus spp.) in a commercial landscape with leaves becoming yellowish-white.  However, the leaves were also being stippled by Oak spider mites (Oligonychus bicolor); a reminder that plants may have more than one pest causing damage at the same time.

Oak spider mites are unusual compared to many other spider mites in that they feed on the upper leaf surface.  They also tend to concentrate their stippling around leaf veins.  As with all spider mites, they use their fag-like chelicerae to rupture individual leaf cells so they can ingest the contents.  Thus, spider mite stippling is much smaller compared to lace bug stippling. 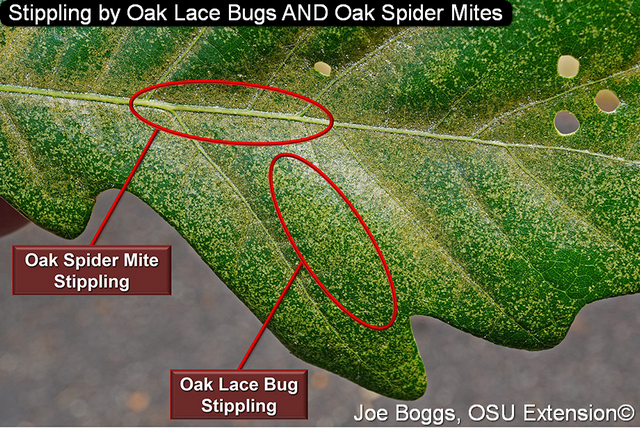 It's also important to separate symptoms produced by lace bugs from those produced by foliar diseases such as powdery mildew.  Management for one will not affect the other. 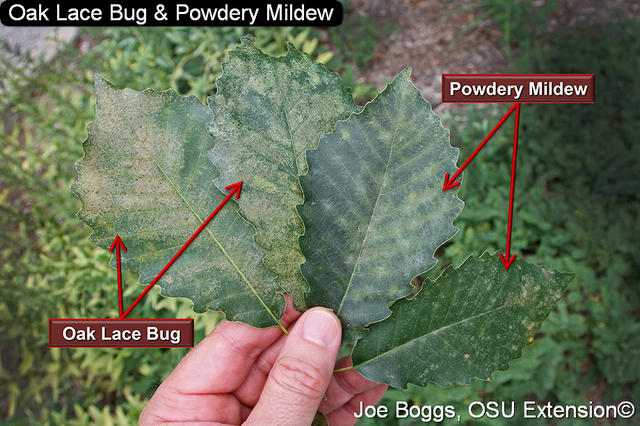 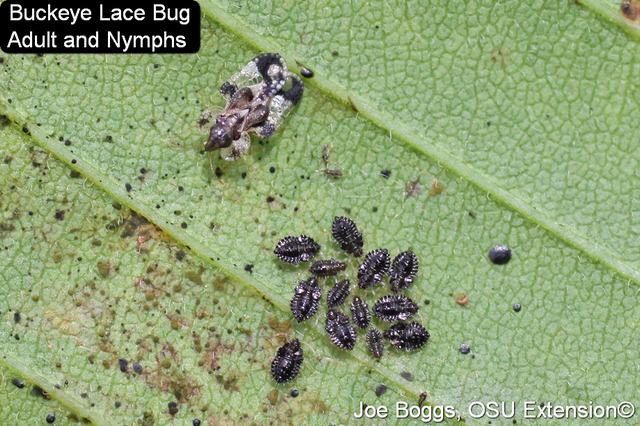 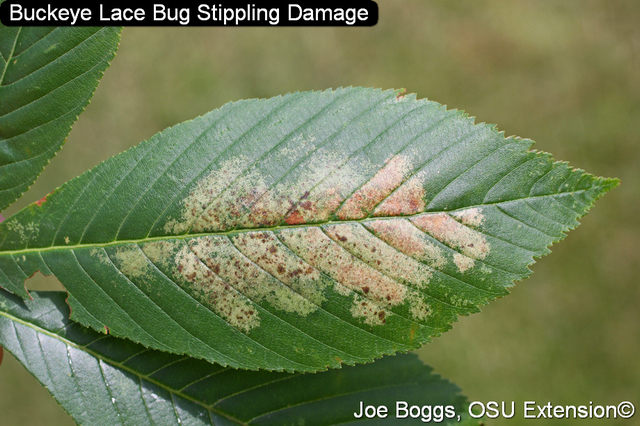 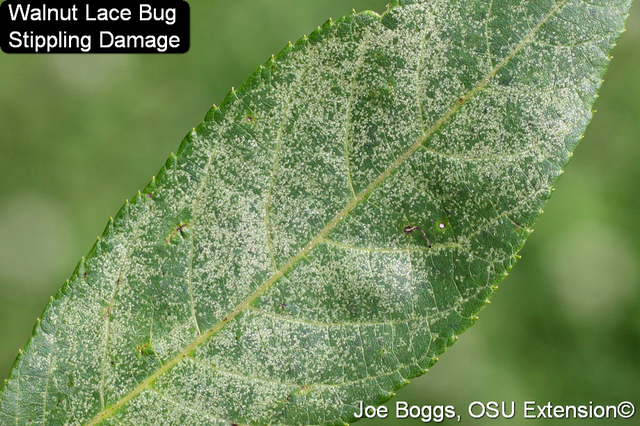 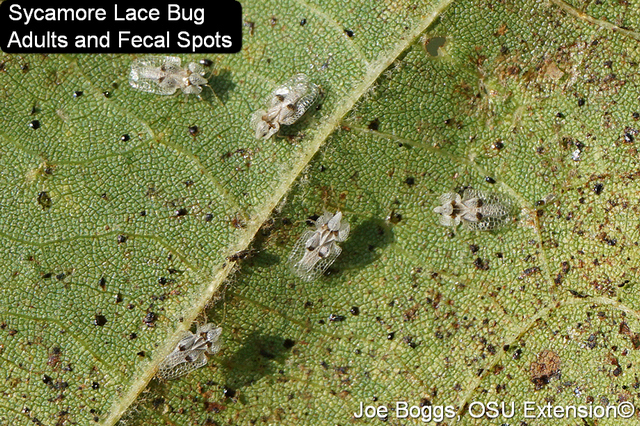 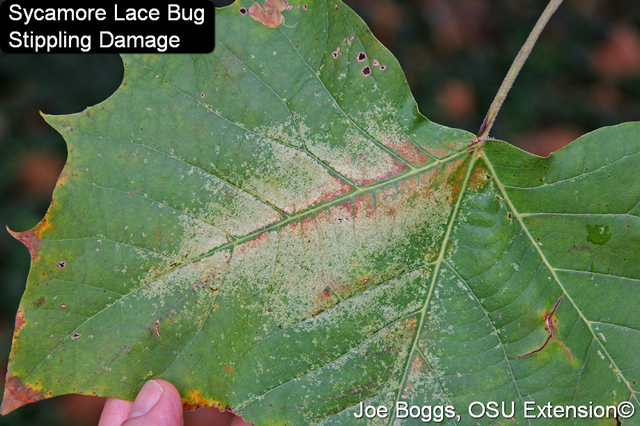 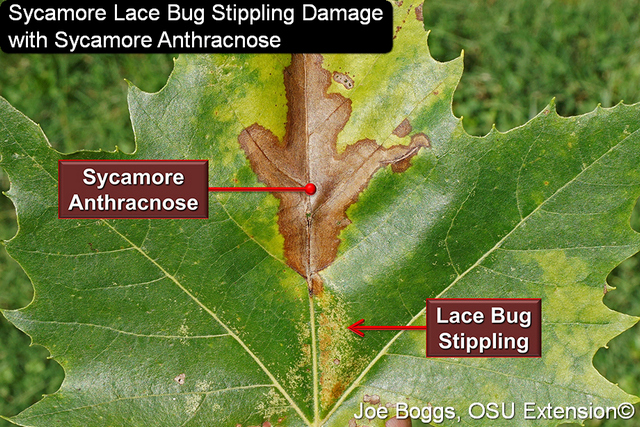 Basswood lace bug grew up with American basswood (Tilia americana); however, it commonly focuses its attention on silver linden (T. tomentosa).  This tough European native can handle many of the urban slings and arrows that send less hardy trees to wood chippers.  However, our native lace bug may turn silver lindens into golden-brown lindens by August in the Greater Cincinnati region. 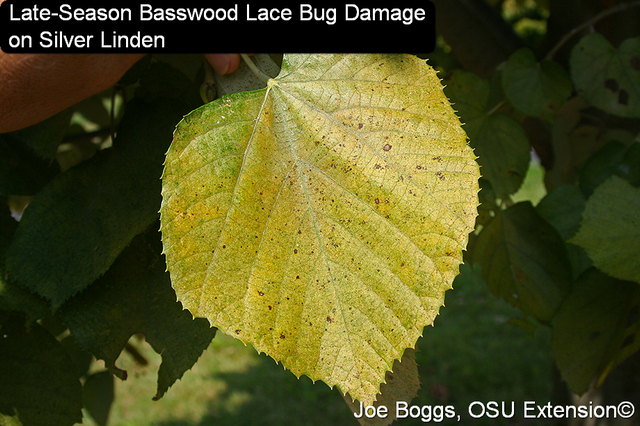 Despite its common name, the hawthorn lace bug (C. cydoniae) has one of the most cosmopolitan palates of any lace bug found in Ohio.  It will feast on a wide variety of rosaceous plants as well as a few plants outside of the rose family such as common buttonbush (Cephalanthus occidentalis).  However, they are most commonly found on hawthorn (Crataegus spp.), serviceberry (Amelanchier spp.), Cotoneaster spp., firethorn, (Pyracantha coccinea), and occasionally rose (Rosa spp.). 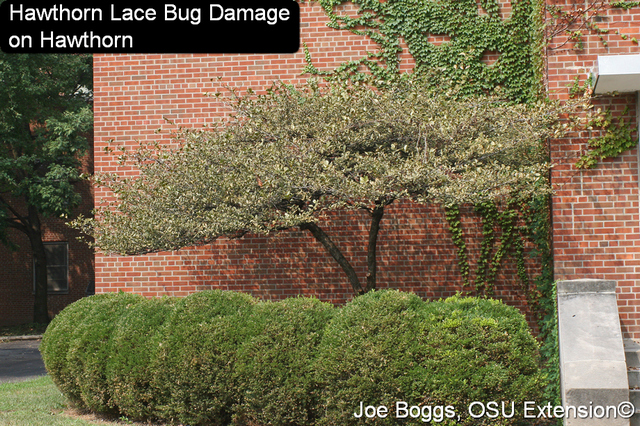 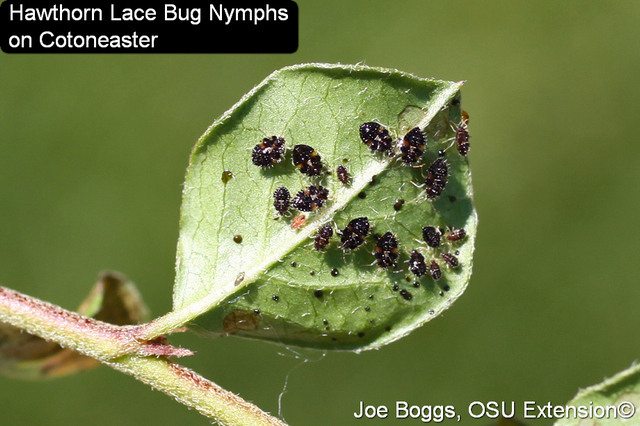 Chrysanthemum lace bugs (C. marmorata) are unusual in two ways.  They are found on both the lower and upper leaf surfaces, and they may feed on a wide range of herbaceous perennials in the Asteraceae family including asters, Rudbeckia, goldenrods, and sunflowers.  These lace bugs may occur in greenhouses as well as landscapes.  Indeed, landscape infestations may originate in greenhouses. 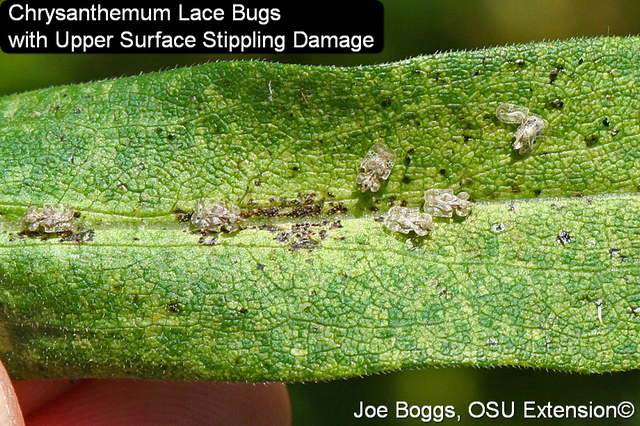 Systemic insecticides solve the mode of entry issue with plant-sucking insects and also present a lower risk to non-target insects as long as they are applied as soil drenches/injections or bark sprays (e.g. dinotefuran) rather than foliar sprays.  Systemic insecticides effective against lace bugs include flupyradifurone (e.g. Altus), and acephate (e.g. Orthene, Lepitect), as well as neonicotinoids such as dinotefuran (e.g. Safari, Transtect) and imidacloprid (e.g. Merit, Xytect).