Buzzing-Bombing Beetles on the OSU Campus 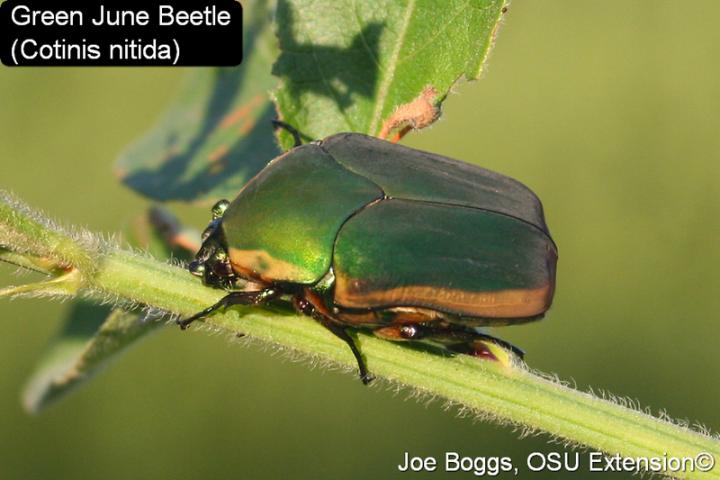 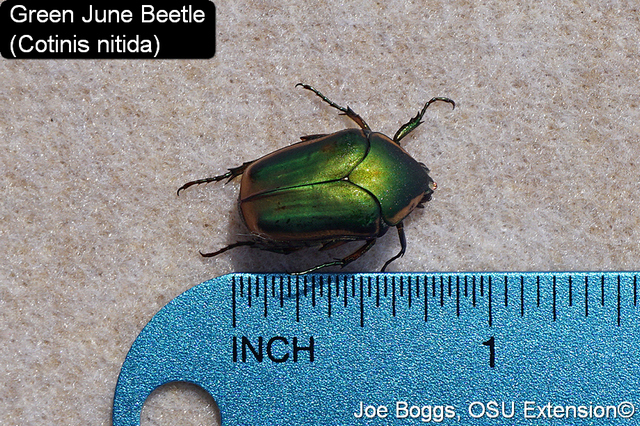 The first odd thing is that despite the "June" in their common name, these scarab beetles always appear on the scene in July in Ohio.  The second peculiar thing is that the beetles commonly cruise distinct patches of grass behaving almost like their flight patterns are confined by an invisible beetle fence. 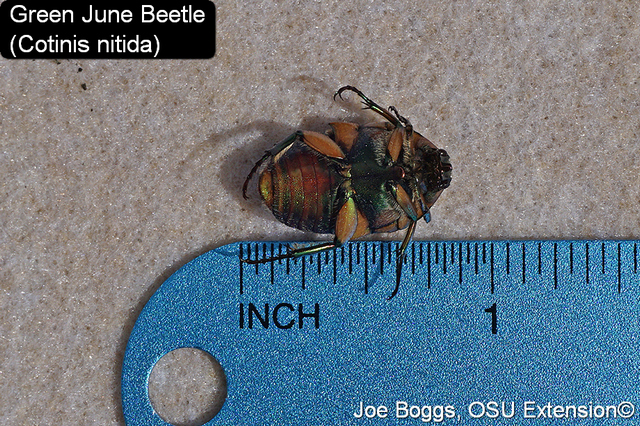 Of course, birds are not going to ignore a large gathering of a potential meat item.  A study published in 2016 showed green June beetles commonly drew the attention of blue jays (Cyanocitta cristata) and common grackles (Quiscalus quiscala) with the jays appearing to selectively feast upon female beetles.

Unlike many of their scarab cousins, I've never seen green June Beetles feeding on plant leaves and there's a good reason.  As my friend and colleague Dan Potter (Professor of Entomology, University of Kentucky) has pointed out to me, adults have spatulate mandibles adapted to a “soft diet.”  They can damage ripened fruit but will also feed on oozing sap and other plant juices.  About all they could do with a leaf would be to tickle it a bit.

White Grubs Do The Backstroke 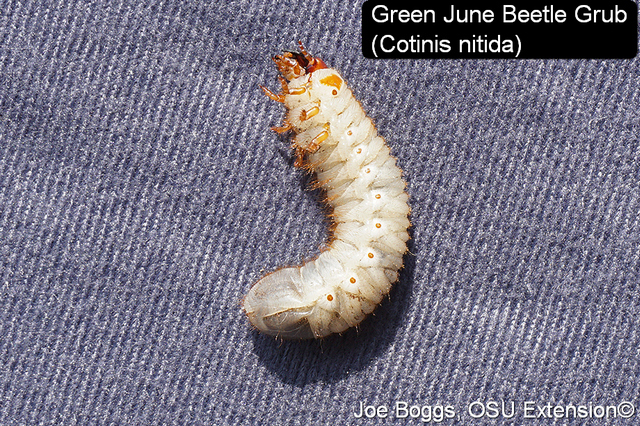 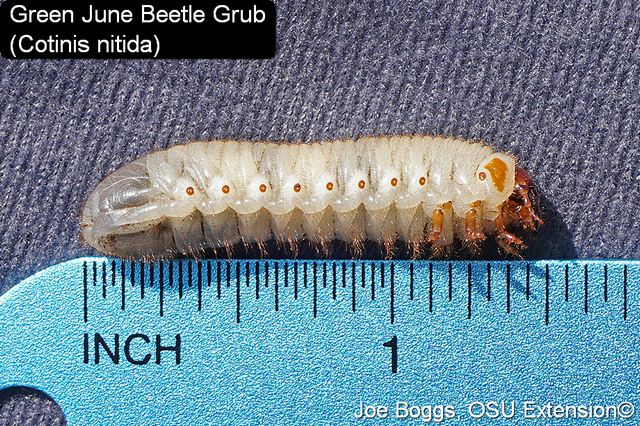 I posted a YouTube video showing this unusual upside-down crawling behavior.  You can view the video by clicking this hotlink:

Unlike other scarab beetle larvae found in turfgrass, green June beetle grubs burrow 10 – 12" vertically into the soil and they remain closely associated with these burrows.  Much of their damage to turfgrass is associated with their burrowing and tunneling behavior given that they primarily feed on decaying organic matter.  However, they have been known to feed on turfgrass producing damage that appears as irregular patches.

Applications of organic matter to turfgrass should also be considered with caution.  Anecdotal reports from turfgrass managers and others have pointed to a link between extremely heavy applications of garden compost or composted sewage sludge and the subsequent appearance of the buzz-bombing beetles the following year.  Indeed, a study published in 2001 showed a correlation between beetle egg-laying and the application of organic fertilizers.

Blue-Winged Wasps (Scolia dubia, family Scoliidae) are named for their dark blue wings.  However, one of their more striking features is two prominent yellow spots on a black background on their third abdominal segment. 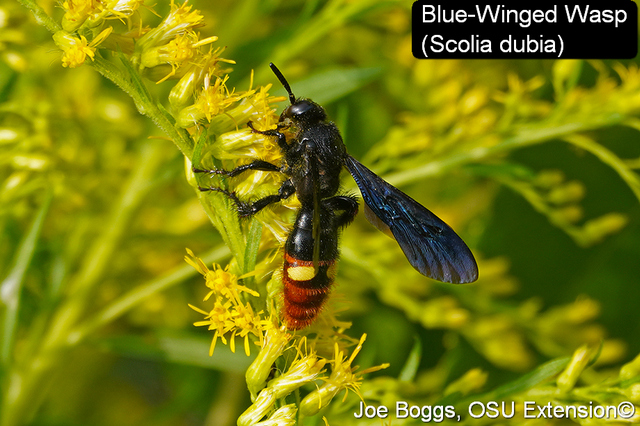 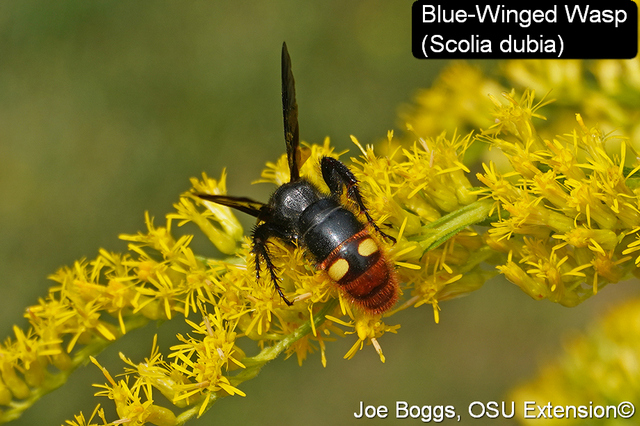 These large hairy wasps are a plant-pollinator and may be spotted in late summer to early fall scrambling around on flowers to sip nectar.  I’ve observed them on a wide range of late-season flowers, but most often find them on common goldenrod (Solidago canadensis). 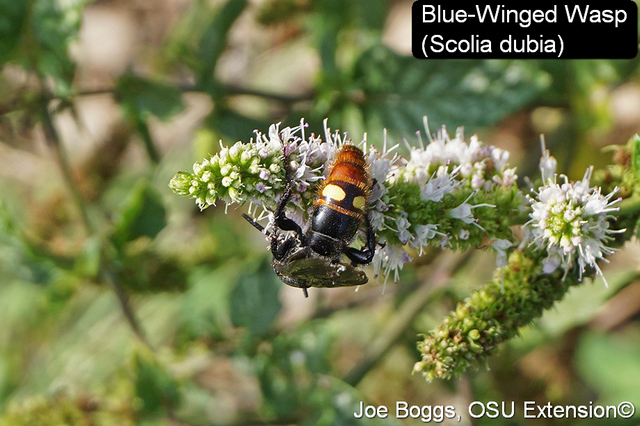 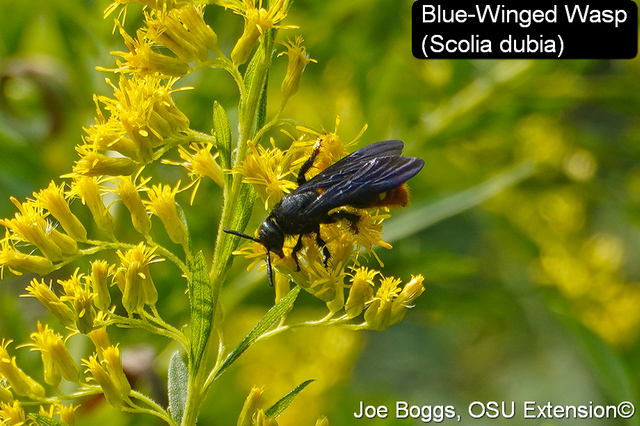 Scoliid wasps are parasitoids of scarab beetles and blue-winged wasps maintain the family tradition:  they are the nemesis of green June beetles.  Females dig into the soil until they find a green June beetle grub, or they will simply enter the grub's soil burrow.  The wasp first stings and paralyzes the grub, then they lay an egg on the grub's body.  When the egg hatches, the wasp larva feeds leech-like on its hapless grub victim until the grub is no more.

Later this season, you may see blue-winged wasps making low-level flights only a few inches above turfgrass infested with green June beetle grubs.  They may appear intimidating; however, these are male wasps so they don’t have stingers.  They are awaiting the emergence of new females to … do what insects do.

Their numbers may be impressive as reported in a study published in 2016 in the Journal of the Kansas Entomological Society.  The study site was a farmhouse near Marshall, Virginia, and here is a quote from the paper:  “Although some males could be found flying slowly and erratically low over the grass throughout the entire front lawn, the males were concentrated in an area roughly 25 m2.  Here, during the peak of activity there were dozens, if not hundreds, of mate-searching males, flying over the portions of the study area in the sun.”  What a sight that must have been!

I’ve seen blue-winged wasps cruising lawns in Ohio, but never in the numbers reported in the paper.  Still, it’s important to remember that just like in American Graffiti, the cruisers are males.  So, they can’t sting.  Although the females can sting, they are not aggressive.  I’ve gotten very close while taking pictures and have never been buzzed or otherwise threatened. 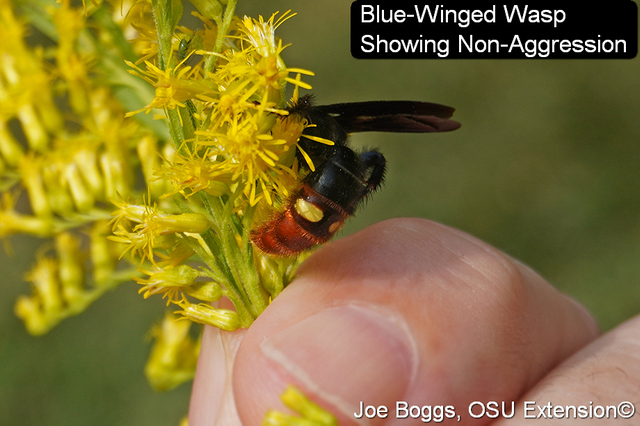