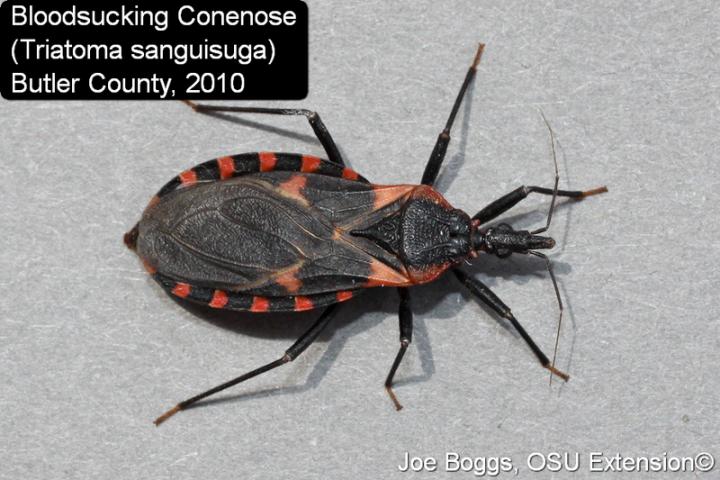 This past week, the Kissing Bug Triatoma sanguisuga was identified from images sent to OSU Entomology from a resident in Warren County and to OSU Extension, Butler County, from a resident in that county.  The specific epithet, sanguisuga, is drawn from the Latin words sanguis (blood), and sugo (suck).  T. sanguisuga was given the approved common name of Bloodsucking Conenose by the Entomological Society of America (ESA).

Despite its scary-sounding common name, this kissing bug is not considered a human health threat in Ohio, and this is not the first time it’s been found in our state.  But more on that later.

However, I would like to be contacted if you find one of these bugs in Ohio.  Please pay close attention to the “look-a-likes” presented at the end of this Alert and compare those insects to your suspected kissing bug.  Note the wide abdomen sticking out past the wing margins with six reddish-orange spots on each side.  If you collect a specimen, please preserve it by freezing the bug.  Click on my name at the top of this Alert to get my e-mail address. 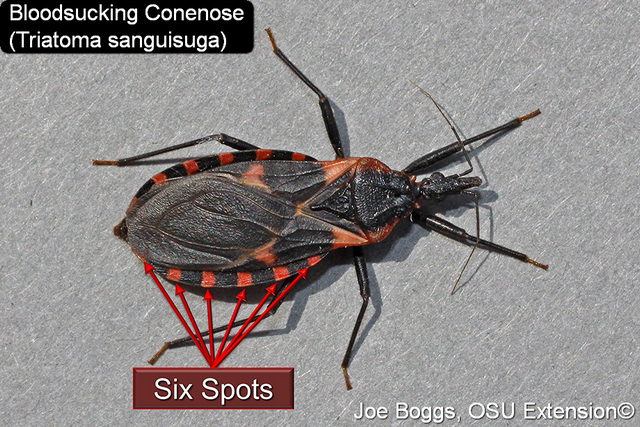 Not the First Time

The two images sent last week are not the first time the bloodsucking conenose has been found in southwest Ohio.  I collected one from the side of my home in Butler County in 2010.  A specimen was brought to the OSU Extension, Butler County office in 2016 and in 2018 an OSU Extension, Master Gardener Volunteer, sent me an image of a bloodsucking conenose collected in Hamilton County. 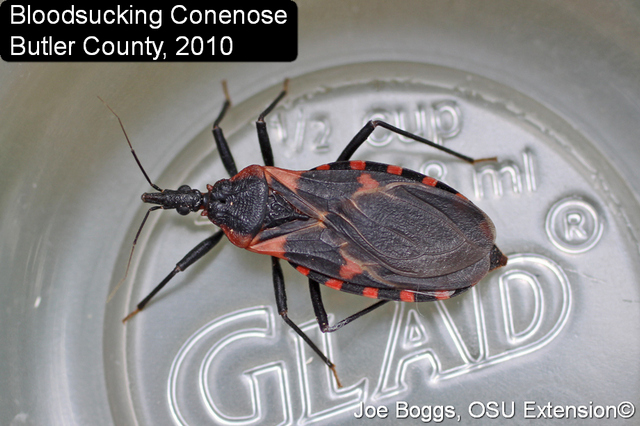 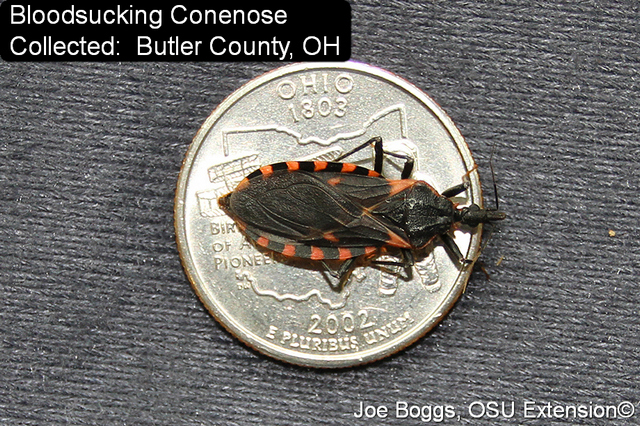 However, the bloodsucking conenose isn’t invading Ohio; it’s been with us all along.  According to a paper titled, "Arthropods of Medical Importance in Ohio," published in the Ohio Journal of Science in 1960, T. sanguisuga is found in southern Ohio.  Although rare, they appear to be endemic to the region.

In fact, as of 2020, the bloodsucking conenose has been confirmed in 23 states including AL, AR, DE, FL, GA, IL, IN, KS, KY, LA, MD, MO, MS, NC, NJ, OK, PA, SC, TN, TX, VA, and WV as well as Ohio.  Additionally, the range of this kissing bug extends throughout Mexico and into Central and South America.

The general common name “kissing bug” is applied to blood-sucking insects that belong to the subfamily Triatominae within the family Reduviidae (assassin bugs).  The bugs are sometimes called triatomine bugs which refers to the subfamily.

The name kissing bugs refers to their habit of biting near a person’s mouth like they’re delivering a kiss.  These triatomine bugs get away with their cheeky behavior by biting people while they sleep.

The bites are usually painless but may lead to a serious disease if the bugs are harboring the protozoan Trypanosoma cruzi in their gut.  The bugs don't inject the protozoan when they bite; they release it from their other end when they defecate.  Infection occurs if the protozoan is accidentally rubbed into the bug's feeding wounds or onto mucous membranes such as nasal passages.  The resulting Chagas disease is a chronic debilitating condition that can be deadly.

World health experts suspect that around 150 species of kissing bugs are capable of harboring T. cruzi in their gut.  However, Chagas is mostly confined to South America, Central America, and Mexico with only a few cases documented in the extreme southern part of the U.S., primarily in Texas.  The vast majority of Chagas cases reported in the U.S. have been connected to travel to the areas where the disease is endemic.

Why We Shouldn’t Panic in Ohio

Eleven triatome species have been confirmed to occur in the U.S.  Except for the bloodsucking conenose, the vast majority of these kissing bugs are confined to the extreme southern parts of the U.S. with most being found in Texas.

However, kissing bugs are not equal in their ability to infect people with the pathogenic protozoan that causes Chagas.  The kissing bugs that pose the greatest threat to human health are those species that can take up residence inside homes, like bed bugs (Cimex lectularius).  These so-called domestic bugs readily feed on people by climbing onto their faces and defecating around their feeding wounds.

Although the bloodsucking conenose was given a threatening-sounding name, it’s not one of the species that has been implicated as a consistent harbinger of Chagas even where the disease is endemic.

Of course, Chagas disease is not endemic to Ohio.  Equally important, the bloodsucking conenose occurs in Ohio, but it’s a rare insect.

Also, the conenose lives outdoors, not inside structures. Their foray into homes is considered accidental.  The bloodsucker does suck blood, but it prefers to feed on animals such as rodents, opossums, dogs, chickens, and occasionally horses.  It’s capable of biting people, but the bug doesn’t like to crawl onto people thus it’s not very effective at spreading protozoan-ladened poop onto biting wounds. 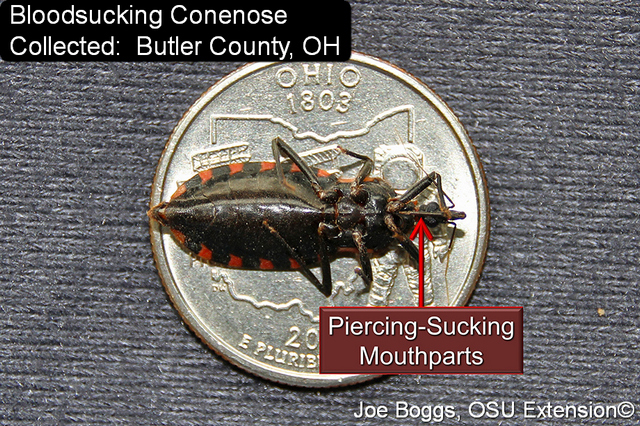 The chances are immeasurably small that an infectious bloodsucking conenose, an insect rarely found in Ohio, would wander away from its preferred habit and into a home to bite a person.  Even if it did, they don’t like to climb onto people's faces to feed and defecate, so there’s little chance of infection.  As with many risks to human health, while it may be possible, it’s highly improbable.

Predaceous Wheel Bugs (Arilus cristatus) are commonly mistaken for kissing bugs.  Indeed, the bugs were at the center of a bug hysteria that swept through Ohio as well as several other states in 2015.  These large bugs share many traits with kissing bugs owing to their membership in the same hemipteran family, Reduviidae. 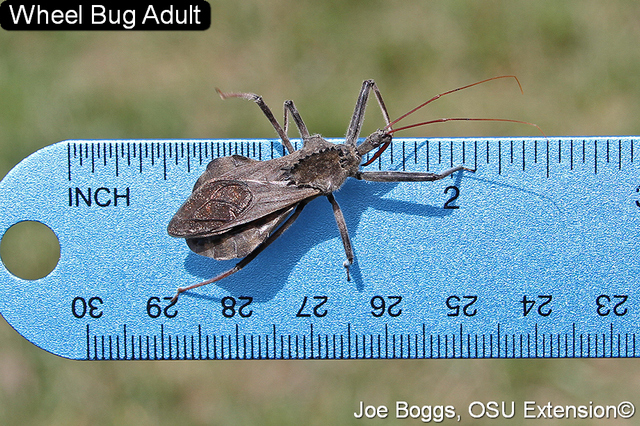 However, wheel bugs get their name from a peculiar feature that rises from the top of the bug's thorax.  The structure looks like half of a cogwheel, with the “gear teeth” clearly visible.  This structure is not shared with any kissing bug.  Also, wheel bugs are light gray to bluish-gray to grayish-brown.  They do not have the reddish markings of the bloodsucking conenose. 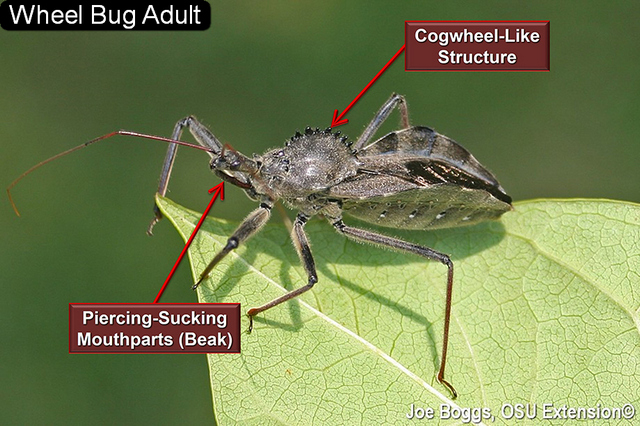 Western Conifer Seed Bugs (Leptoglossus occidentalis) are notorious home invaders as they seek protected winter quarters.  Owing to their size and general body shape, they are also sometimes mistaken for kissing bugs.  However, note the expanded tibia which makes this a type of "leaf-footed" bug. 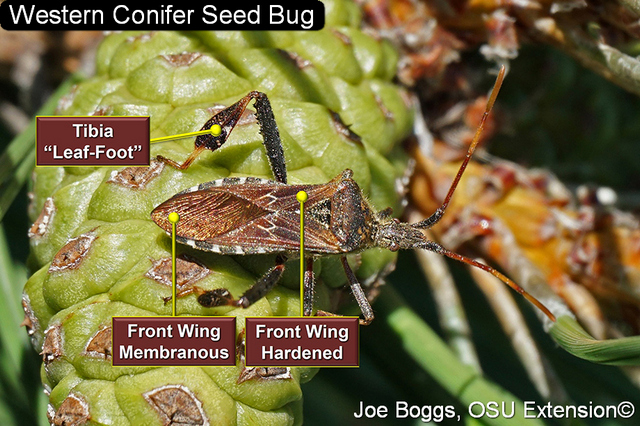 Boxelder Bugs (Boisea trivittata) is another fall home invader that may be mistaken for kissing bugs.  Although they are much smaller, their body shape and reddish-orange markings make them a candidate for being a kissing bug look-a-like.  Note the three stripes on the prothorax which are referenced in the specific epithet, trivittata, which means "three striped." 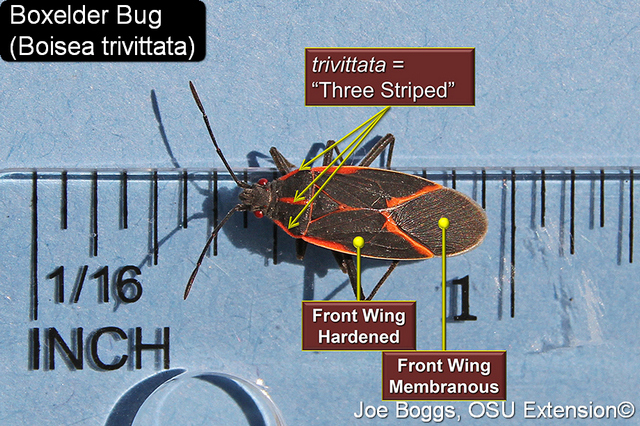 The bright orange color motifs of the Large Milkweed Bug (Oncopeltus fasciatus) and Small Milkweed Bug (Lygaeus kalmii) coupled with their general shapes have also presented identification challenges. These bugs feed on the seed pods of many members of the Apocynaceae (dogbane) family.  However, they occasionally wander into homes, particularly if milkweeds are planted nearby. 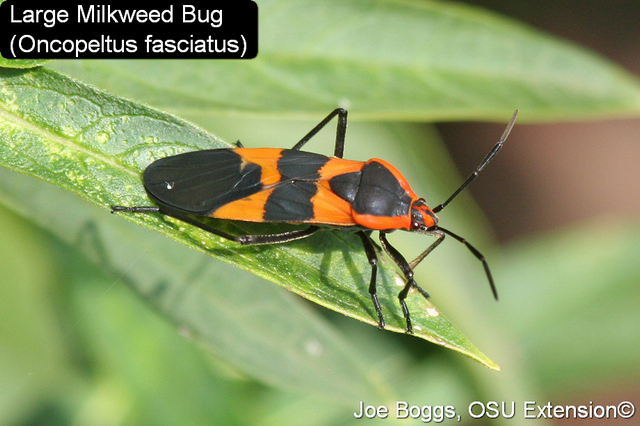 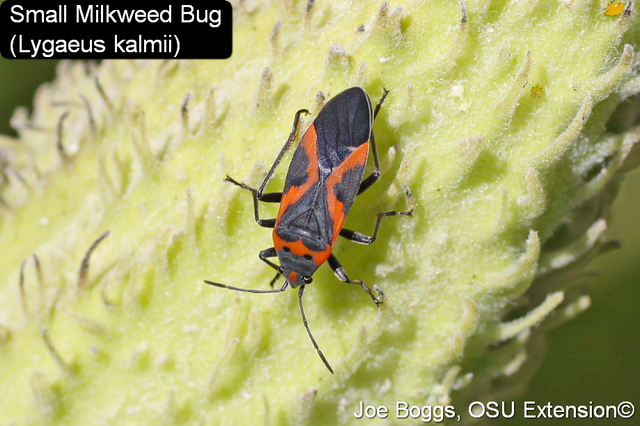 We also have a False Milkweed Bug (Lygaeus turcicus) in Ohio.  Fittingly, this native seed bug primarily feeds on the seeds of False Sunflower (Heliopsis helianthoides).  However, it may also be found on a wide range of flowers and seeds of other plants. 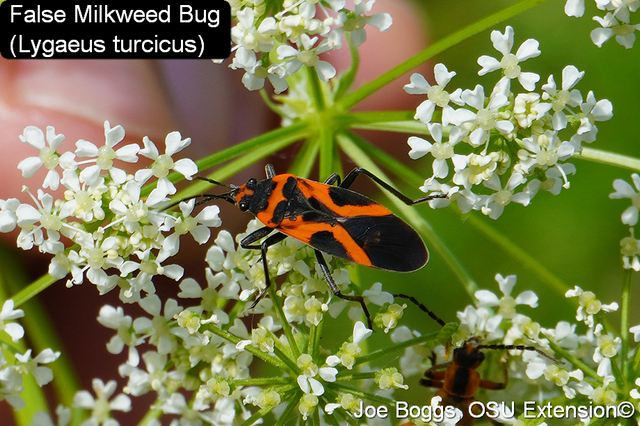