Be Alert for Magnolia Scale AND its Predators 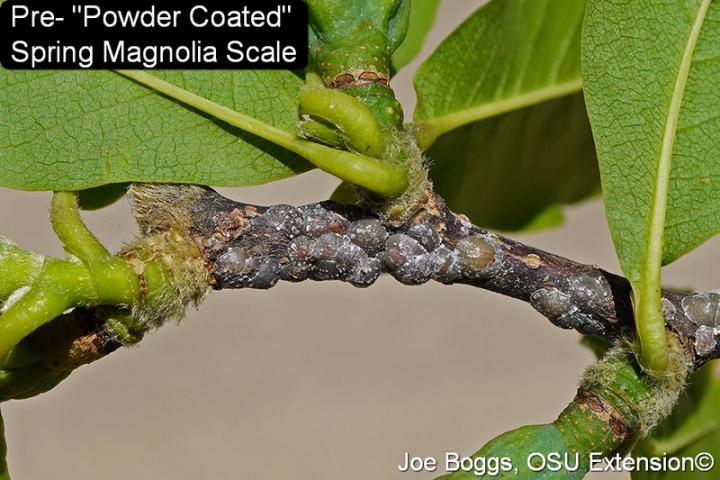 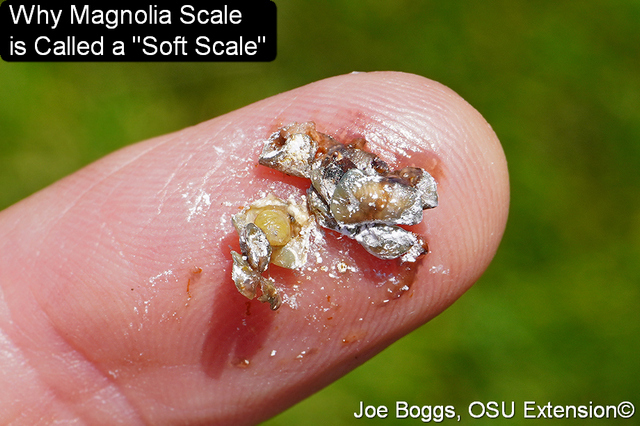 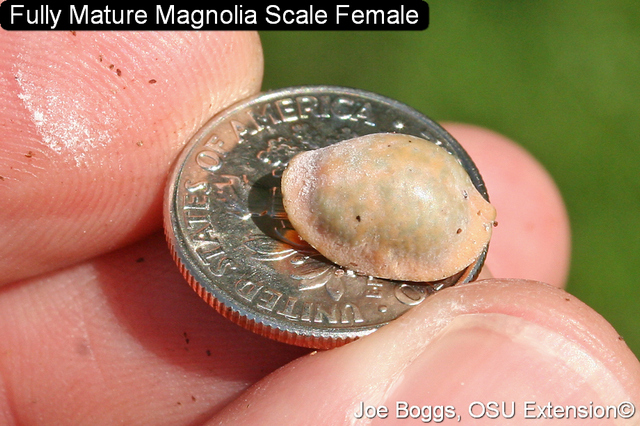 The females are still somewhat flattened and dark gray to grayish-brown making them difficult to detect as they blend with the bark.  You may need to look closely at the magnolia stems to spot the scales. 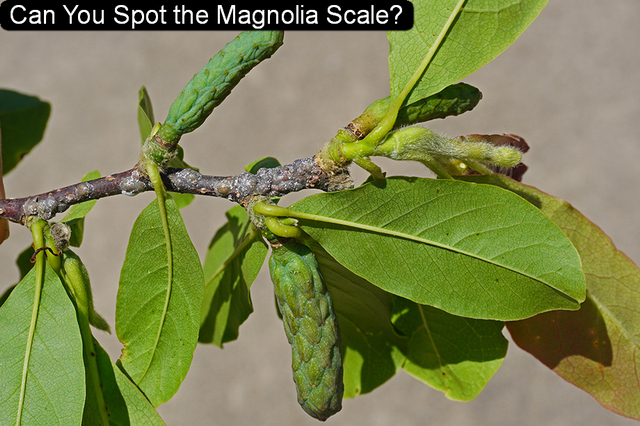 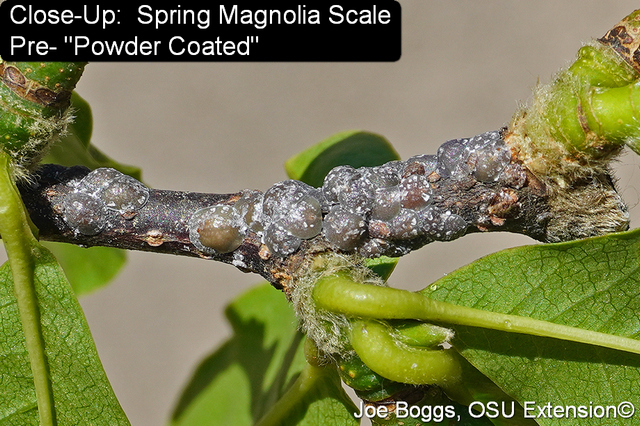 The females change their appearance again when they become covered in a heavy coating of white, powdery exudate making them look like they’re powder coated.  The white coating makes the scales easier to detect; however, it may also cause them to be mistaken for mealybugs. 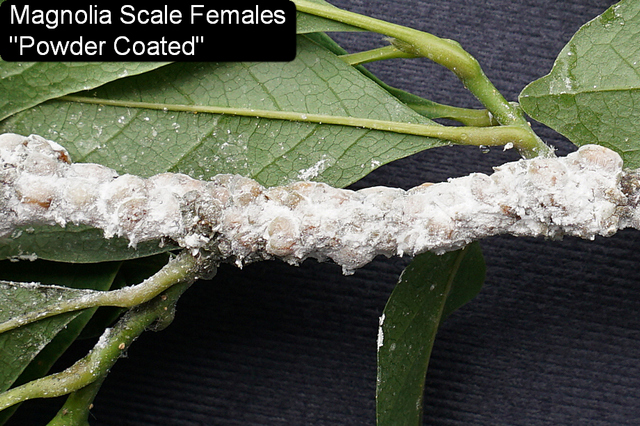 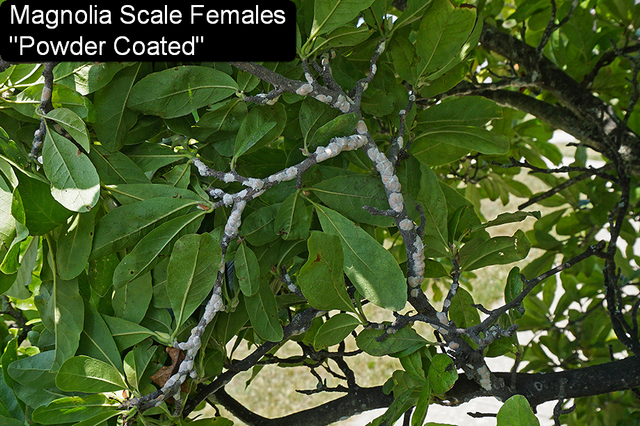 Eventually, they shed the powdery coating as they rapidly expand to their final size and acquire their characteristic helmet-like shape.  This generally occurs in late summer. 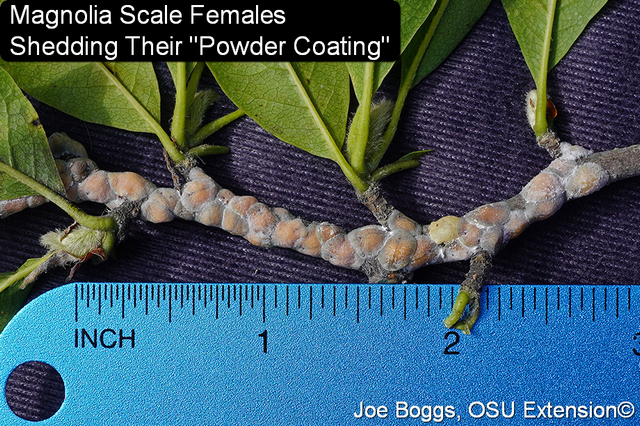 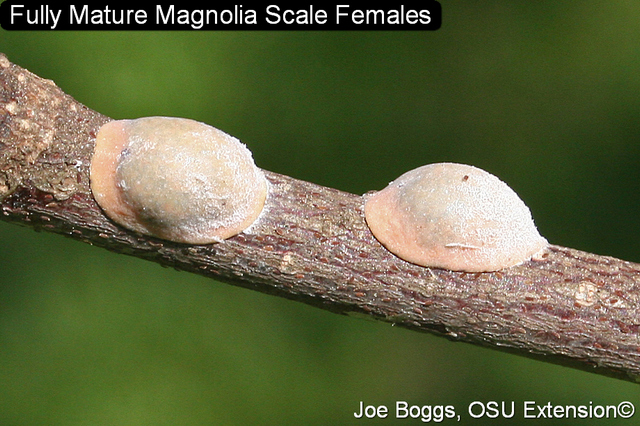 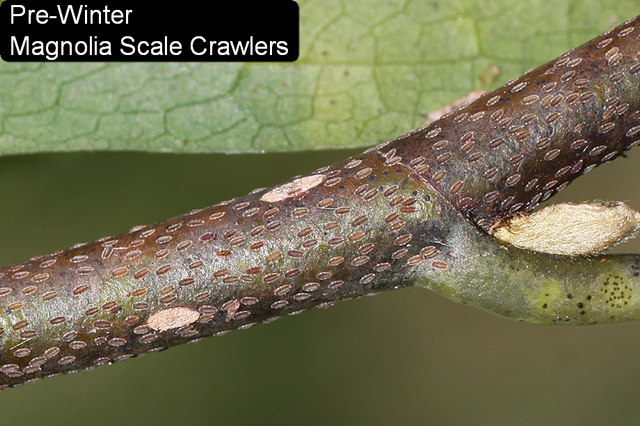 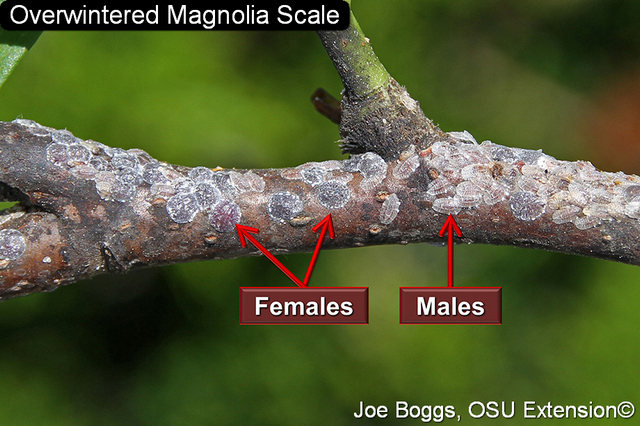 The females remain immobile, and eggs are produced in late summer to early fall.  The eggs are held internally until they hatch creating the illusion that the females are giving birth to the first instar nymphs (= crawlers).  The unusually long period that females develop eggs means that eggs hatch from early August throughout September in Ohio. 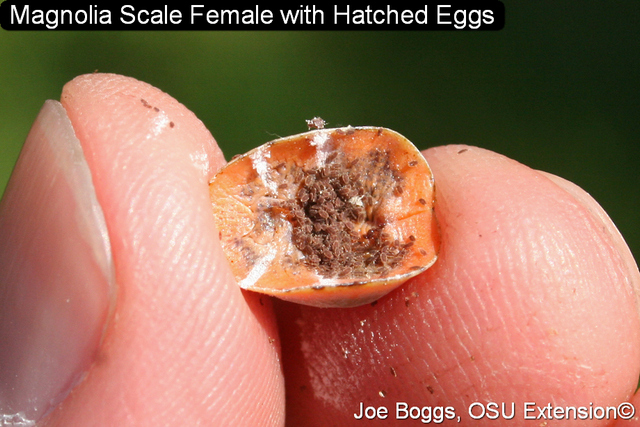 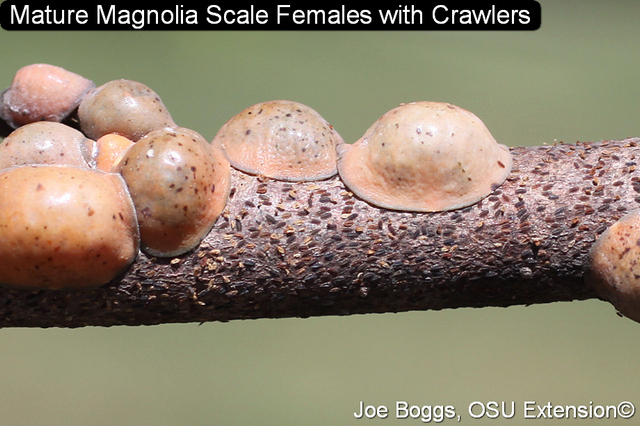 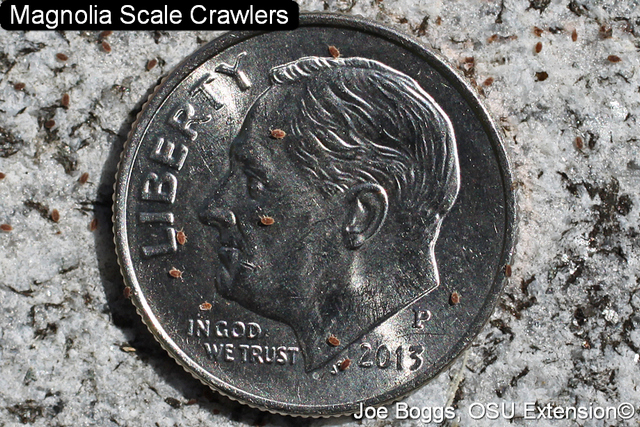 The first instar crawlers are highly mobile but become immobile once they insert their piercing-sucking mouthparts into stems.  This is the overwintering stage. 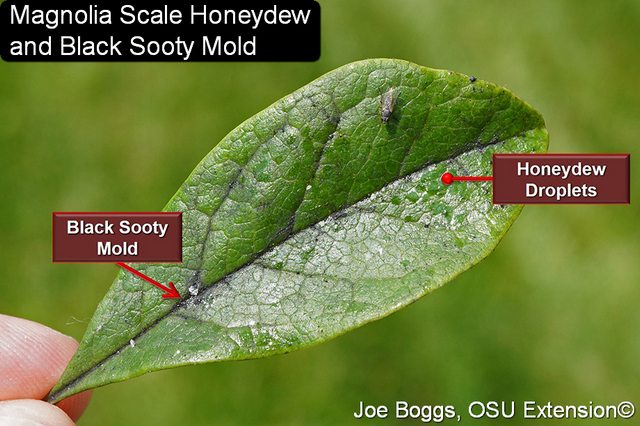 Magnolia scale is notorious for producing copious quantities of sticky, drippy honeydew.  The sugary liquid may cause heavily infested trees to literally buzz with insect activity as flies, bees, and wasps seek a sweet treat.  A high percentage of the flies are often members of the blow fly family, Calliphoridae.  Their maggots may have a taste for decaying flesh, but adults like sweets. 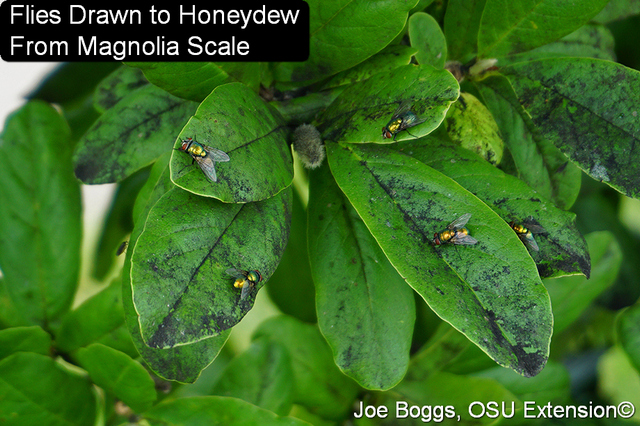 The honeydew drips onto the leaves and stems of the host plant as well as understory plants to eventually become colonized by black sooty molds.  Although the molds cause no harm to the overall health of infested trees, the blackened leaves can seriously reduce the aesthetic appeal of heavily infested trees. 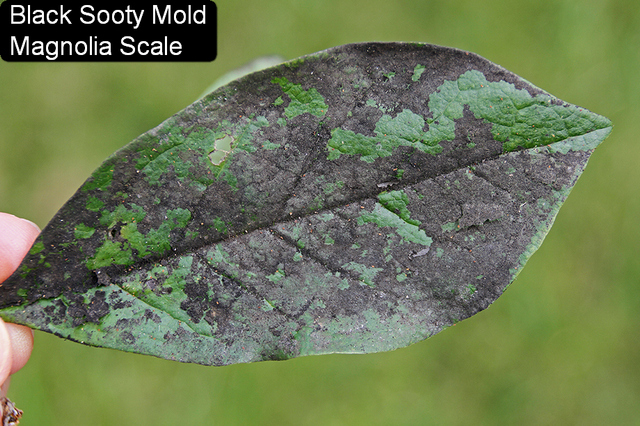 As with most soft scales, magnolia scale is seldom a direct killer of established landscape trees.  However, a substantial loss of sap from a heavy scale infestation represents a serious loss of energy resources to the trees.  The accumulated stress coupled with other stress-producing conditions may cause leaf yellowing and loss, branch dieback and canopy thinning, and even the death of entire trees.

3. The 3-Ps:  Predators, Parasitoids, and Pathogens can have a significant impact on soft scales including magnolia scale.  The 3-Ps include native enemies of magnolia scale as well as non-natives. 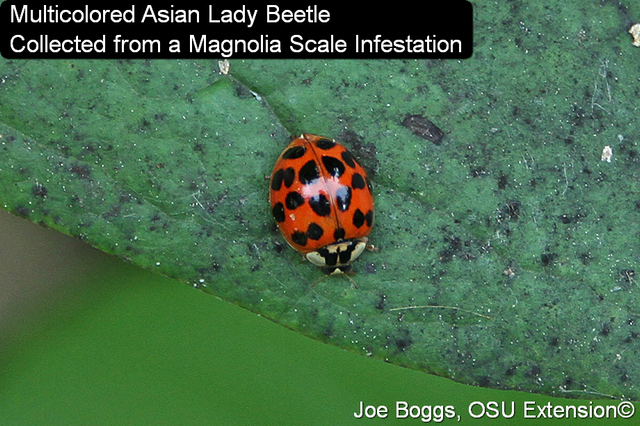 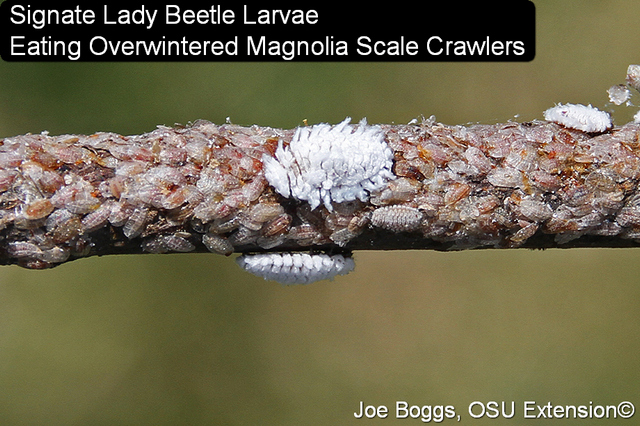 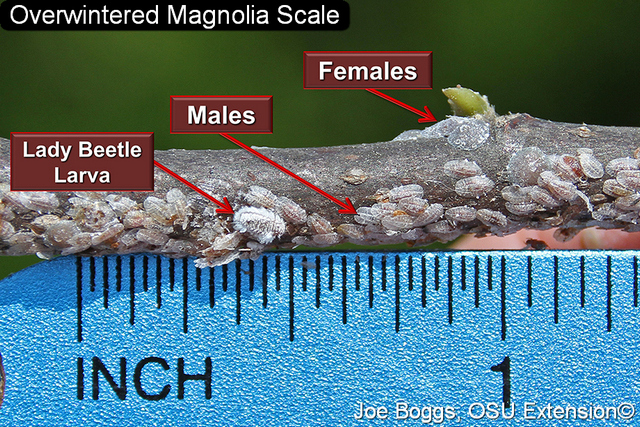 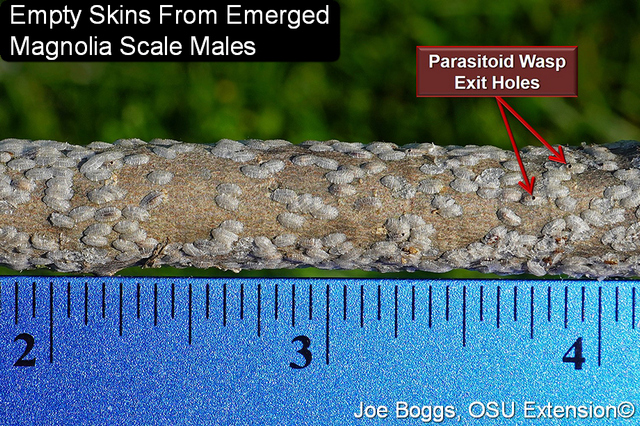 I’ve observed the impact of predators first-hand with magnolia scale.  Last season, I watched Signate Lady Beetle (Hyperaspis signata) larvae decimate magnolia scale infesting a small saucer magnolia in my home landscape.  I was relying on this “private stock” of magnolia scale to photo-document the different phases of the scale for BYGL Alerts. 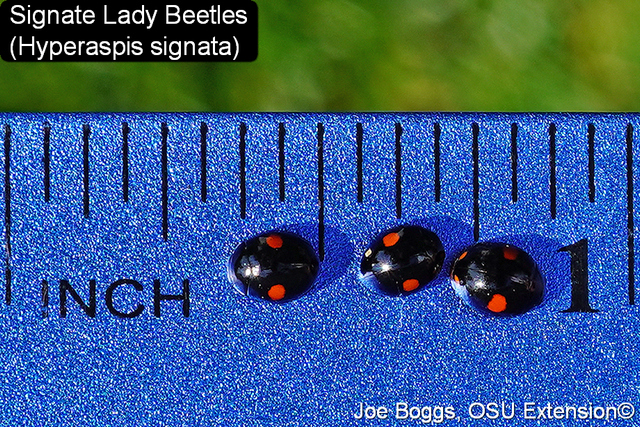 My wife is thrilled; I was not.  You can read more about it in the BYGL Alert titled, “Magnolia Massacre” posted on July 16, 2021 [ https://bygl.osu.edu/node/1822 ].  The images below were taken during the massacre.  As you see, the Signate lady beetles have white wool-coated larvae that are wolves in sheep's clothing.  The lady beetles look almost exactly like mealybugs. 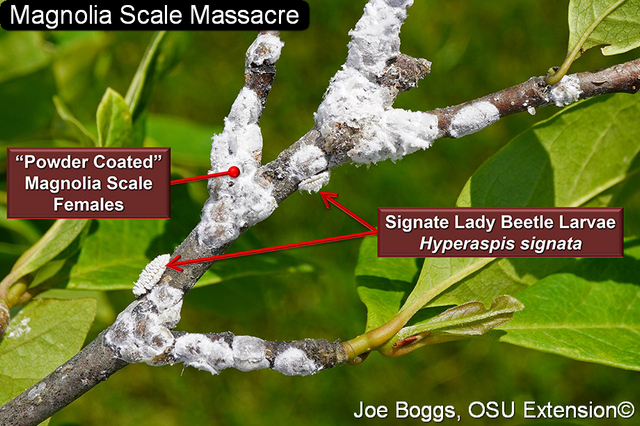 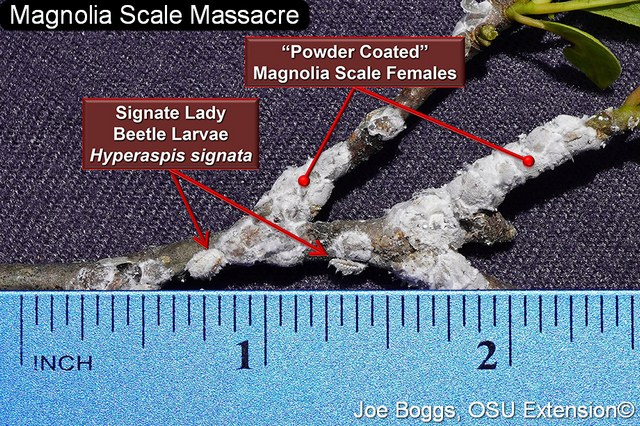 The image below was taken yesterday on a star magnolia (M. stellata) growing in landscaping near my home in southwest Ohio.  My magnolia was heavily infested last season; sadly, I can find no magnolia scale this season. 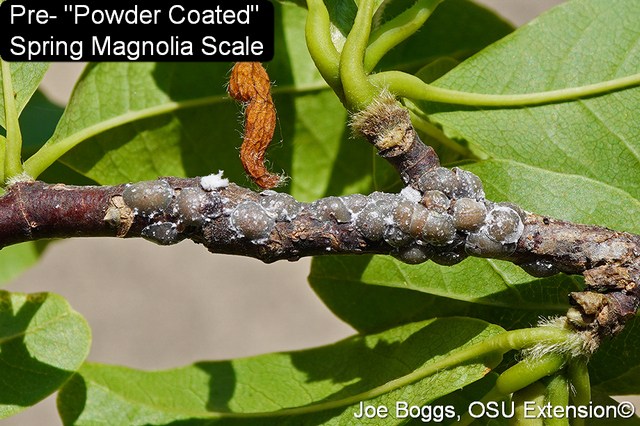 However, when I looked closely at this year’s infestation, I found that Signate lady beetle larvae had also discovered my neighborhood infestation meaning the scales may not be long for this world.  Unfortunately, it also means I’ll need to find another infestation to monitor! 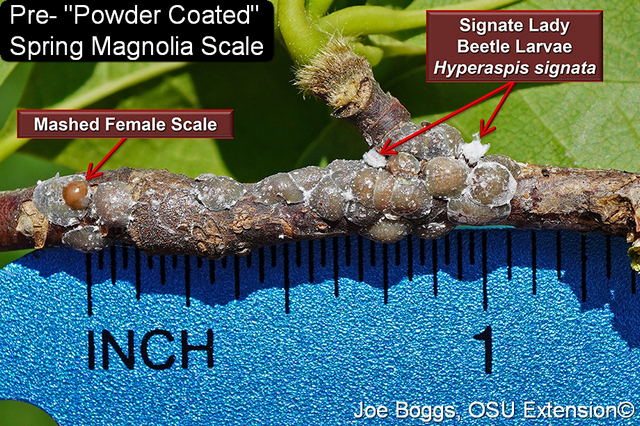 4. Scrub it Away.  Physically removing soft scales using a dish scrubber or soft-bristled scrub brush is a direct approach to scale management.  Although scrubbing away softs scale is best applied to small trees, it can be highly effective in reducing burgeoning scale populations.  However, timing is important with the current maturing females providing a good target.  Waiting until females develop into their mature form risks the small, flattened 1st instar nymphs escaping the scrubbing. 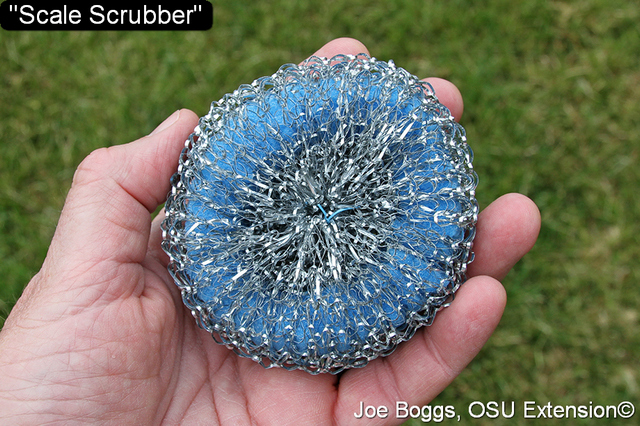 Topical insecticide applications targeting 1st instar crawlers later in the growing season can be effective.  However, depending on the active ingredient(s) in the product, they can also kill bio-allies such as lady beetles.  Also, multiple applications may be required owing to magnolia scale’s extended egg hatch.

"Horticultural oils" (e.g., summer oils), as well as insecticidal soaps, can be effective on 1st instar crawlers and have a limited impact on beneficial insects.  However, oils and soaps require direct contact to kill the scale crawlers and there is no residual activity.  Consequently, multiple applications and thorough coverage are required throughout the scale egg hatch.  Spring applications can also be effective; however, there is a risk of damaging flower buds.