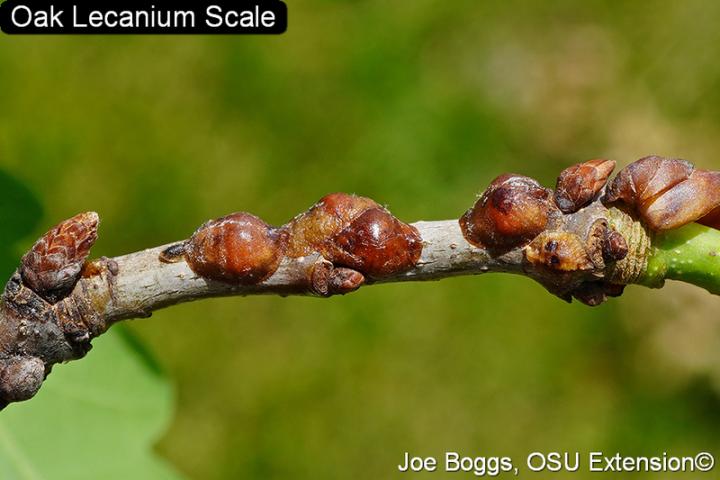 I recently visited a commercial landscape in southwest Ohio that had 5” – 8” DBH oaks (Quercus spp.) with leaves covered in clear, sticky honeydew.  A close examination of one of the sticky oaks revealed a moderate infestation of Oak Lecanium Scale (Parthenolecanium quercifex, family Coccidae (Soft Scale Insects)). 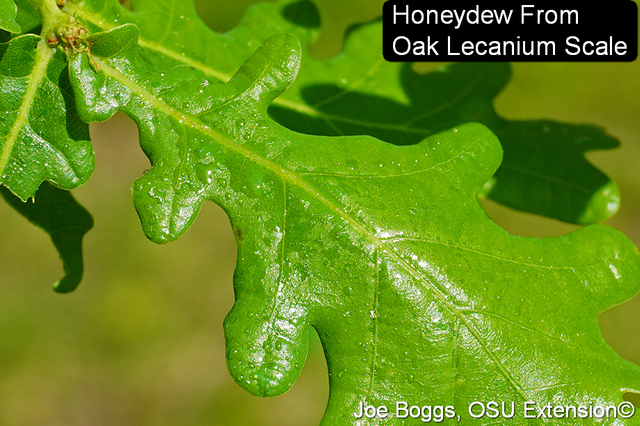 This native soft scale is notorious for raining large quantities of sweet sticky honeydew onto the leaves and stems of its host tree as well as onto understory plants, sidewalks, parked cars, inquisitive entomologists, etc.  As with all soft scales as well as aphids, planthoppers, froghoppers (= spittlebugs), and mealybugs, oak lecanium scale adult females (there are no males) and nymphs insert their piercing-sucking mouthparts into phloem vessels to suck sap.  They extract both carbohydrates for energy and amino acids to build proteins and enzymes.

However, the sugary sap contains a much higher percentage of carbohydrates by volume compared to amino acids.  This means the sap-sucking insects must remove a huge amount of sap to extract the amino acids required to meet their needs.  They discharge excess sap from their anus in the form of a sticky, sugary, clear liquid called "honeydew;" a polite name for the liquid scale poo. 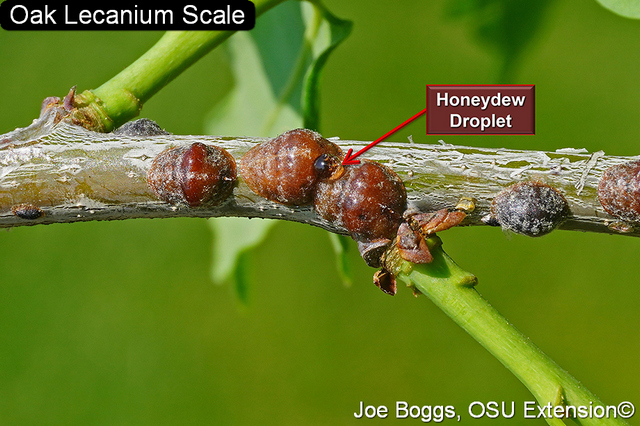 The Partheno- in the genus name Parthenolecanium refers to parthenogenesis which is a type of reproduction that does not require the services of males.  Every oak lecanium is female. 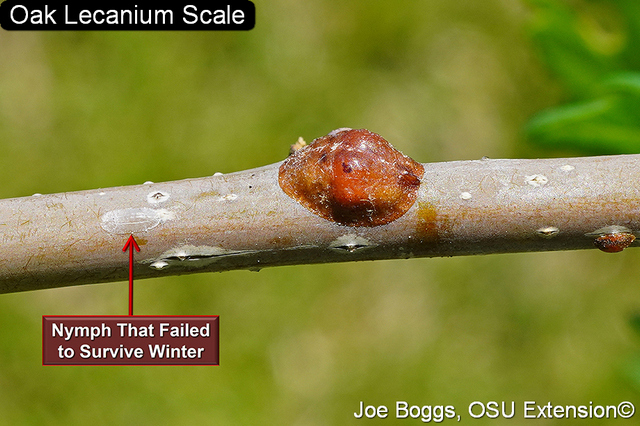 Oak lecanium scale can be difficult to separate from European Fruit Lecanium (P. corni) and vice versa.  Adding to the challenge, both of these “brown soft scales” may be found together infesting the same oak tree. 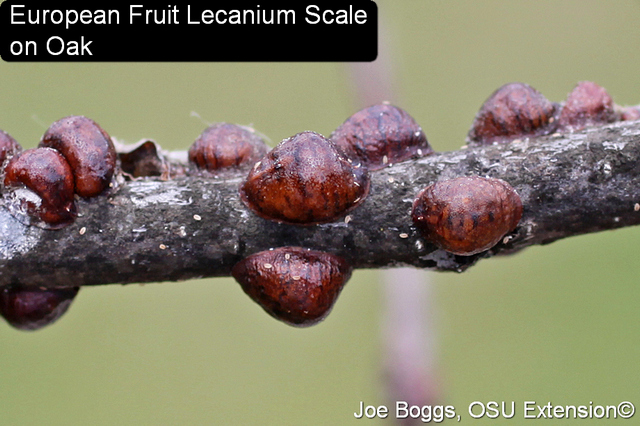 Indeed, some online resources posit these scales may be the same species with observed deviations reflecting variability within the species.  However, I’ve observed that the fully inflated soft scale that I call “oak lecanium” have distinctive bump-like protuberances. 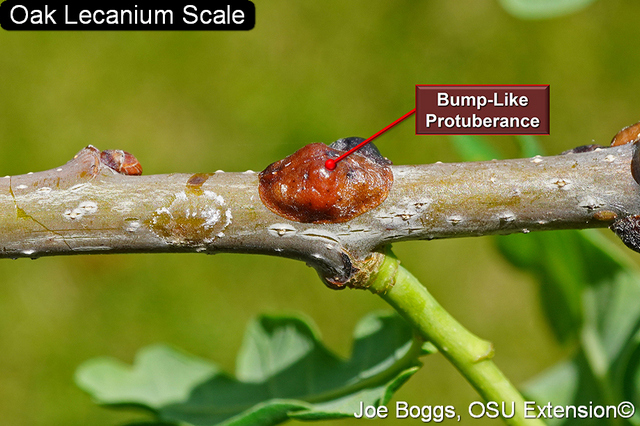 Avoid Stress:  The literature notes a strong correlation between tree stress and the development of damaging infestations of oak lecanium as well as other soft scales.  Stress-inducers commonly cited include high reflective heat from surrounding paved or concreted surfaces as well as reduced soil moisture where trees have a limited root area.  This means parking lot and municipal street trees should be closely monitored. 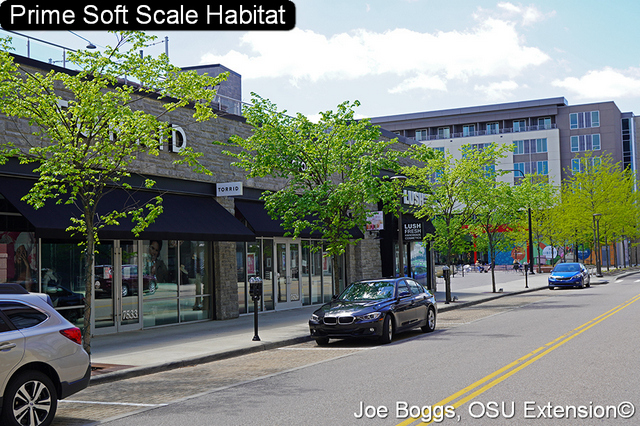 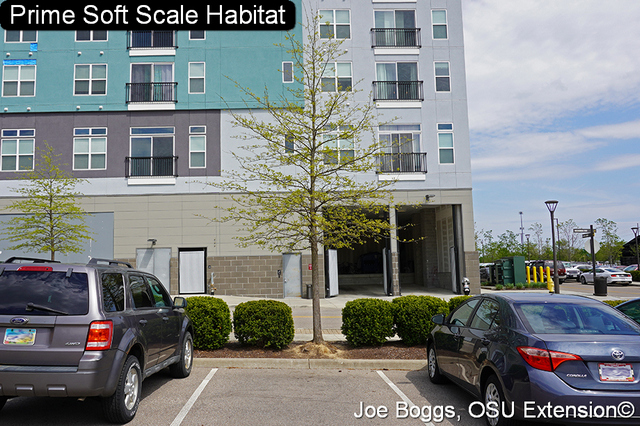 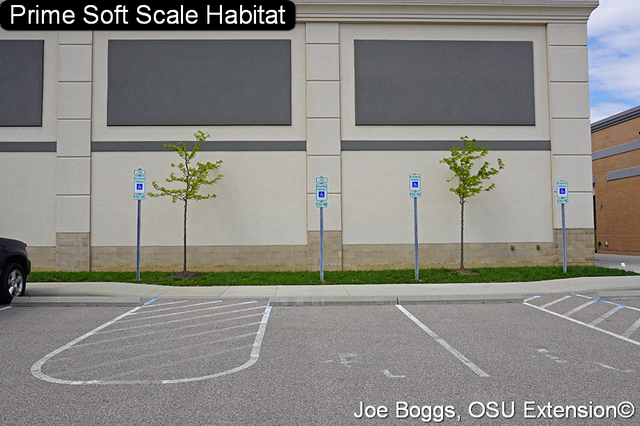 Although oak lecanium is not considered a tree killer, accumulated chronic stress caused by substantial sap loss from heavy scale infestations coupled with other stress-inducing conditions may cause canopy thinning, stem dieback, and tree death.  Thus, the best first step in scale management is to resolve other issues that may affect overall tree health.

This does not include making fertilizer applications unless correcting a nutrient deficiency revealed by a soil test.  Remember that sap-sucking insects like soft scales and aphids must remove huge quantities of sap from phloem vessels to extract the small fraction of dissolved amino acids.  Nitrogen is a significant component of amino acids so applying nitrogen fertilizer just makes life easier for soft scales and aphids.  They will thank you with their friends and family plan.

Scrub Away the Problem:  You can take advantage of their soft scale status to easily remove the puff-up females from plant stems using a scrubbing pad or scrub brush.  It's an effective management method for small trees and preserves natural bio-allies such as lady beetles and other predators that target this sucking insect. 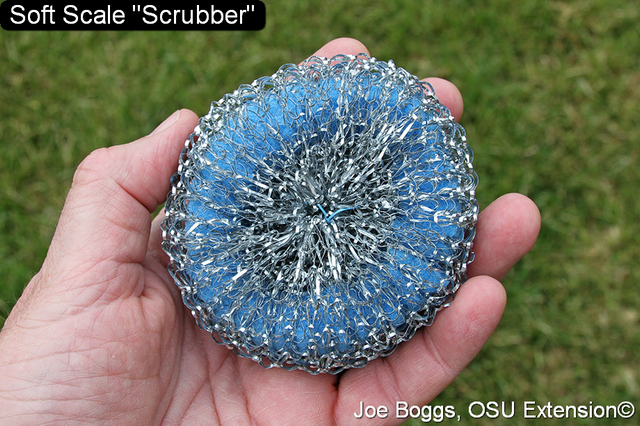 Systemic Insecticides:  Applications of systemic insecticides may be required to reduce high scale populations.  Soil drench applications of the systemic neonicotinoids imidacloprid (e.g., Merit, Xytect) or dinotefuran (e.g., Safari, Transect, Zylam) have been shown to reduce oak lecanium infestations when applied during the growing season according to label directions.

Topical Insecticides – with Caution:  Online resources commonly note that so-called “crawler sprays” are effective against oak lecanium.  Tree stems and the underside of leaves are sprayed targeting first instar crawlers as they make their way to their summer leaf abodes.

However, such broad-based blanket applications using general insecticides such as pyrethroids can produce unintended consequences by killing predators and parasitoids that help keep scale populations in check.  Several university fact sheets note that municipal mosquito fogging has been linked to lecanium scale outbreaks.

Using selective insecticides such as insect growth regulators (IGRs) have less of an impact on bio-allies.  Products based on the active ingredients azadirachtin or pyriproxyfen can spare insect enemies of soft scales.

The 3-Ps:  Predators, Parasitoids, and Pathogens can have a significant impact on soft scale populations.  The images below show clear evidence of parasitoid activity on the oak lecanium scale. 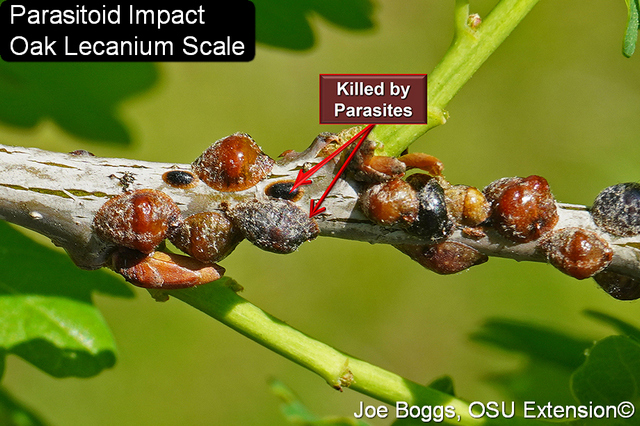 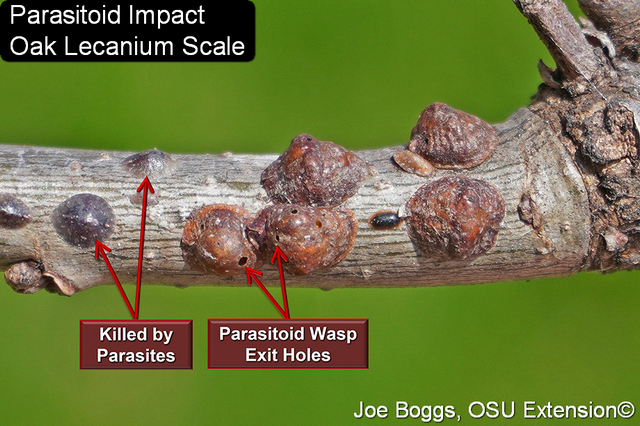 Last season, I watched Signate Lady Beetle (Hyperaspis signata) larvae decimate my Magnolia Scale (Neolecanium cornuparvum) “private stock” on a small saucer magnolia (Magnolia x soulangeana) in my home landscape.  The magnolia scale is the largest-sized soft scale found in Ohio, but there was not a single magnolia scale female left for me to photograph when they were supposed to have reached their full glory.  My wife is thrilled; I was not.  You can read more about it in the BYGL Alert titled, “Magnolia Massacre” posted on July 16, 2021 [ https://bygl.osu.edu/node/1822 ]. 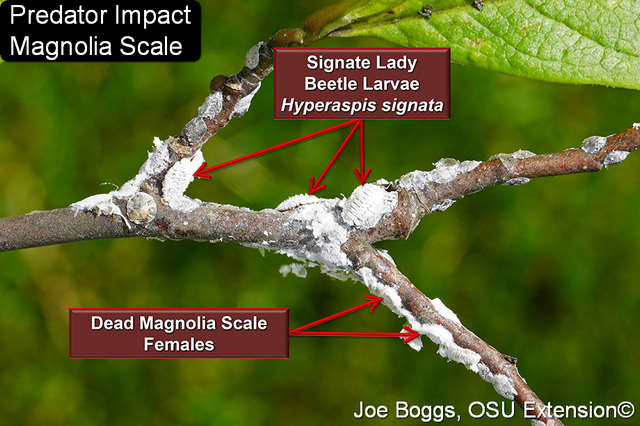 Sometimes we don’t need to manage tree pests; Nature does the killing for us.