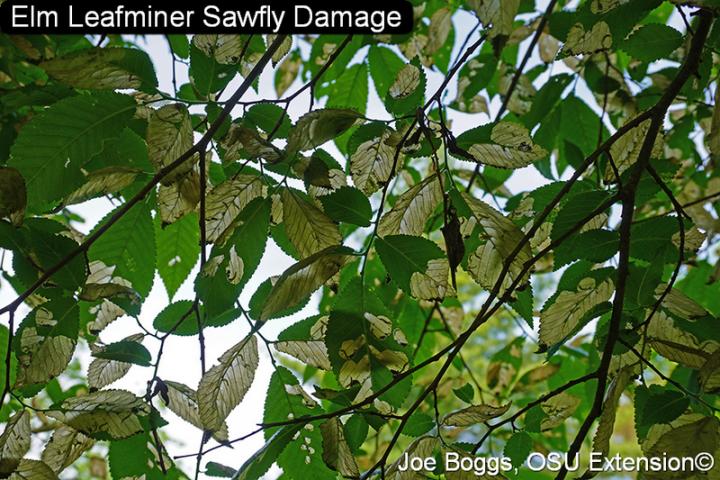 The leaves of elms may be turning brown in southern and central Ohio thanks to the leafmining activity of the Elm Leafminer Sawfly, Fenusa ulmi (= Kaliofenusa ulmi).  The sawfly larvae undergo rapid development, so damage occurs quickly. 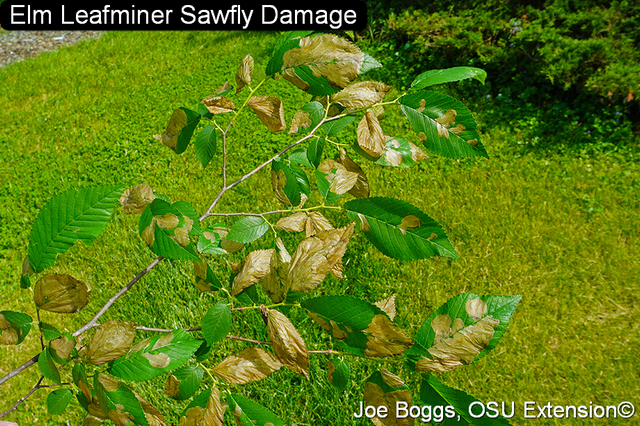 Unfortunately, the rapid larval development means the leafmining larvae have already moved beyond the effective reach of control options in southern Ohio.  Indeed, many of the leafmines I examined were empty meaning the larvae had already bailed out to pupate in the soil. 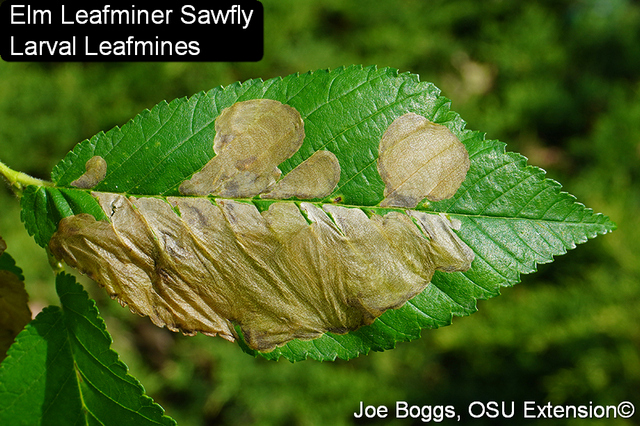 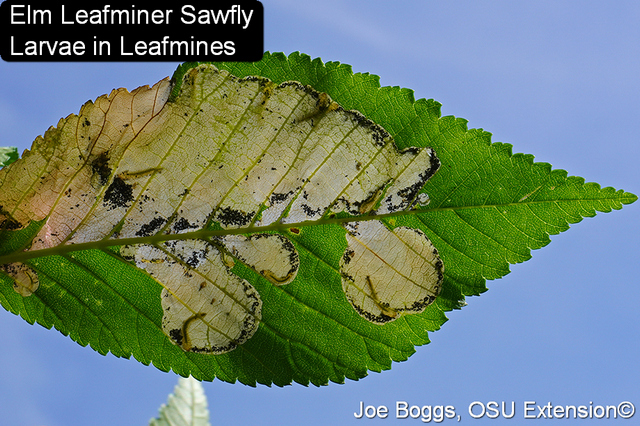 Fortunately, the sawfly only has one generation per season.  Heavily defoliated trees have plenty of time this season to produce replacement foliage without the new leaves becoming fodder for another generation.

The elm sawfly leafminer is reported to be a native of Europe that was introduced into North America in the late 1800s.  Although the sawfly has a wide host range, certain elms are particularly susceptible.  American elm (Ulmus americana) is listed as a host; however, it’s rare for the sawfly to produce noticeable damage on this native elm.  On the other hand, slippery elm (U. rubra) appears to have an “eat here” sign hanging around its truck.

Likewise, only certain European elms are attractive to the sawfly.  European field elm (U. carpinifolia) usually shows negligible damage while Camperdown elm (U. glabra 'Camperdownii') consistently provides an annual sawfly brown-out.  Indeed, other Wych elms (U. glabra) are also highly susceptible.  Among the Asian elms and associated hybrids, only Manchurian (cut-leaf elm) (U. lanciniata) appears to attract the sawfly; however, the damage seldom rises beyond a moderate level. 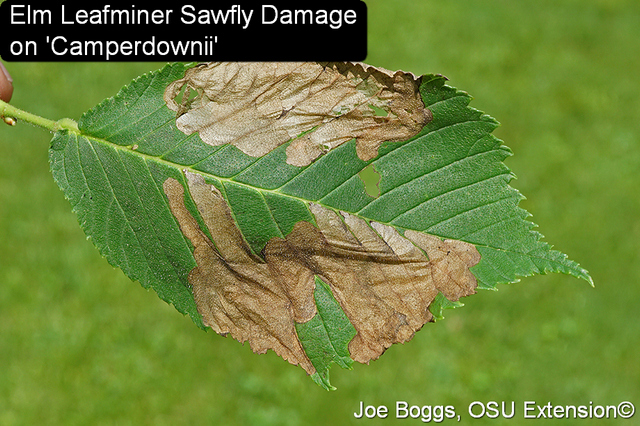 Life in a Leaf Sandwich

Elm leafminer sawflies spend most of the summer and the entire winter as pupae in the soil.  Adults emerge in the spring when the accumulated GDD reaches 219.  I've found that the full bloom of common chokecherry (Prunus virginiana) is a reliable phenological indicator of adult emergence. 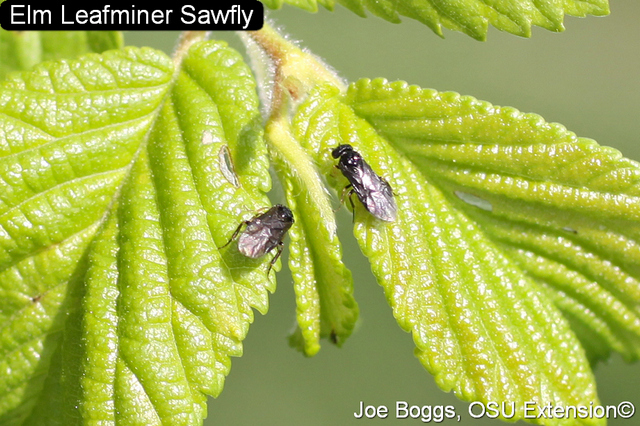 Sawflies are so-named because of their body shape and the appearance of their ovipositors.  Although they are related to wasps, they lack the narrow "waists" associated with wasps which makes them look like flies. 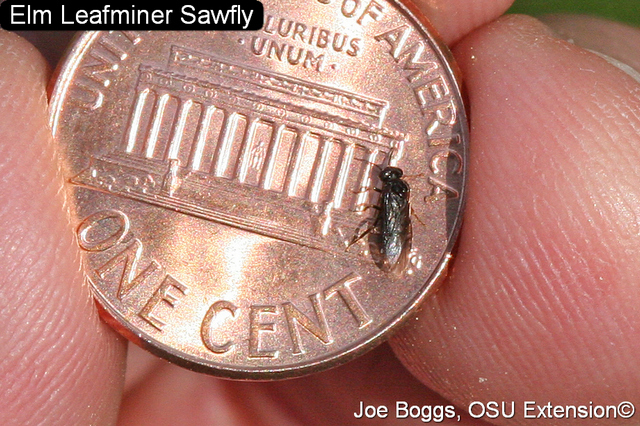 Their ovipositors look and function like tiny saws which the elm leafminer sawfly uses to slice into leaves where they deposit their eggs.  Most egg sites are located near a leaf vein; however, some may occur away from the veins.

Once the eggs hatch, the resulting larvae live between the upper and lower leaf surfaces where they mine the leaf parenchyma to produce blister-like, "blotch" mines.  The mines are usually bounded by the leaf veins as they extend towards the leaf margins.  However, the blotch mines may blur the lines near leaf edges and large numbers of mines may merge.  The larvae develop through 5 instar stages before dropping from their mines to pupate in the soil. 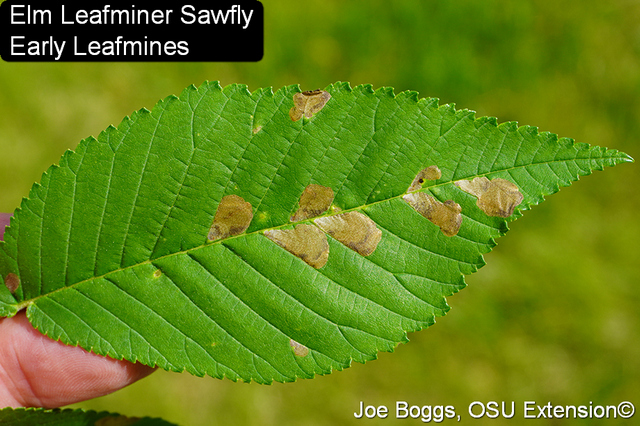 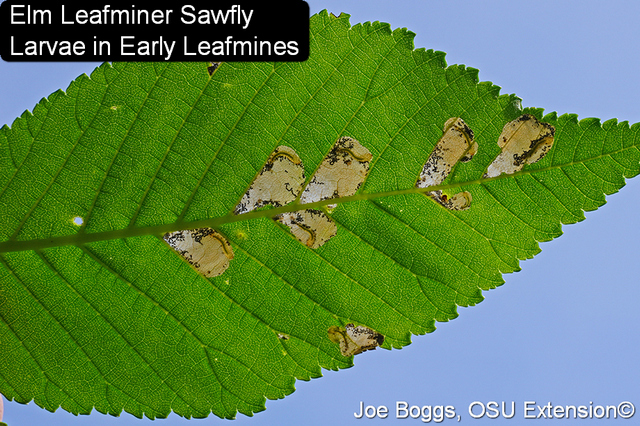 Although the leafmines may appear unsightly, the sawflies seldom cause enough damage to significantly harm the overall health of established host trees.  As noted above, heavily damaged elms have enough time this season to produce new leaves and accumulate the required volume of stored carbohydrates to support leaf expansion next year.  However, heavy defoliation of newly planted elms or elms growing on poor sites may produce a different outcome.

Heavy damage can be prevented by making soil drench applications of the systemic neonicotinoids imidacloprid (e.g. Merit, Xytect) or dinotefuran (e.g. Safari, Transect, Zylam).  The applications must be made as early as March to allow enough time for the insecticides to move into trees in sufficient concentrations to provide control of the leafmining larvae.