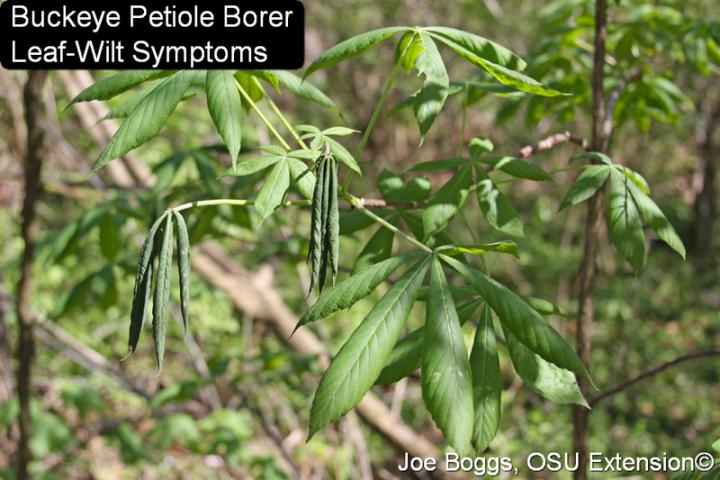 The title of this Alert isn’t referring to last year’s shocking November surprise in that State Up North.  Curtis Young (OSU Extension, Van Wert County) reported during yesterday’s BYGL Zoom Inservice that the handiwork of the Buckeye Petiole Borer (Zeiraphera claypoleana, family Tortricidae) is appearing on its namesake host in northwest Ohio.  Likewise, I’ve been finding damage on wild understory buckeyes in the southwest part of the state. 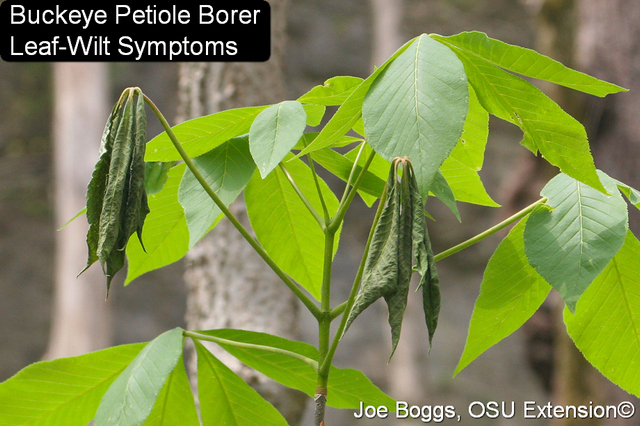 We’ve noted in past BYGL Alerts that the moth appears to prefer small understory trees growing in wooded areas along streams.  I’ve rarely seen damage on mature trees or trees in landscapes.  The literature notes this native moth is specific to Ohio buckeye (A. glabra); however, petiole borer activity has also been observed on yellow buckeye (A. flava).  Whether or not it’s the same moth species has not been determined. 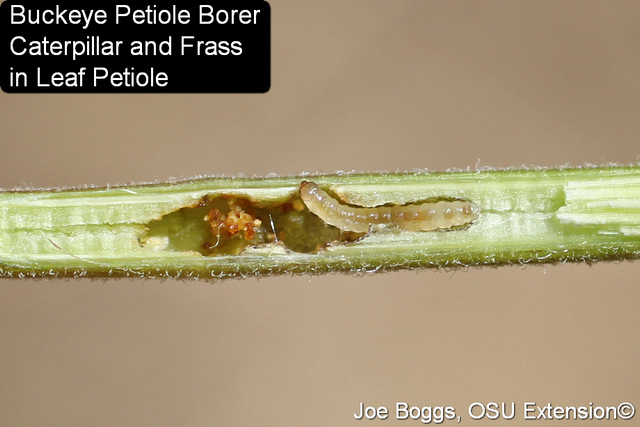 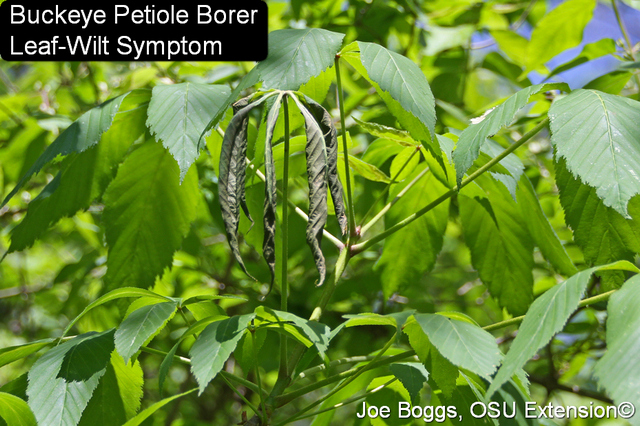 I’ve never found more than one caterpillar per petiole even where populations are high.  Look closely for a slight swelling of the petiole on wilted leaves.  There may be a small hole exuding granular-like frass (insect excrement).  This indicates there is a caterpillar actively feeding within the petiole. 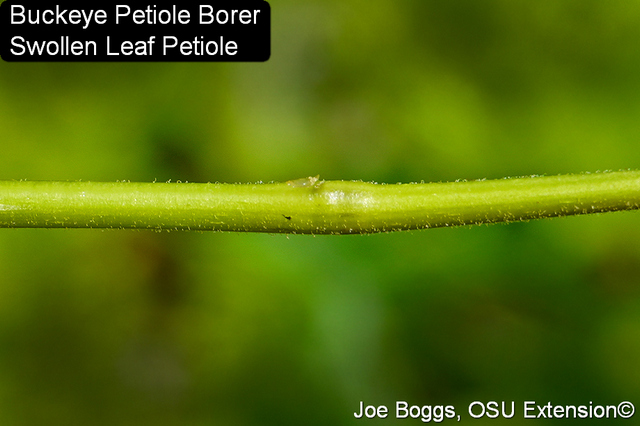 A clean hole in the petiole indicates the caterpillar has completed its development and exited to pupate in the soil.  Slicing open the petiole will reveal a short, empty chamber. 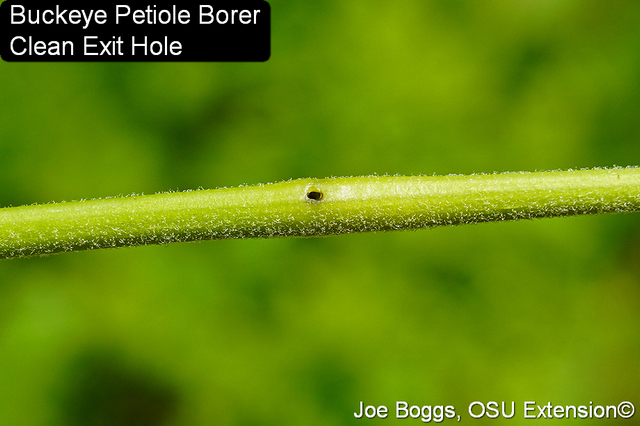 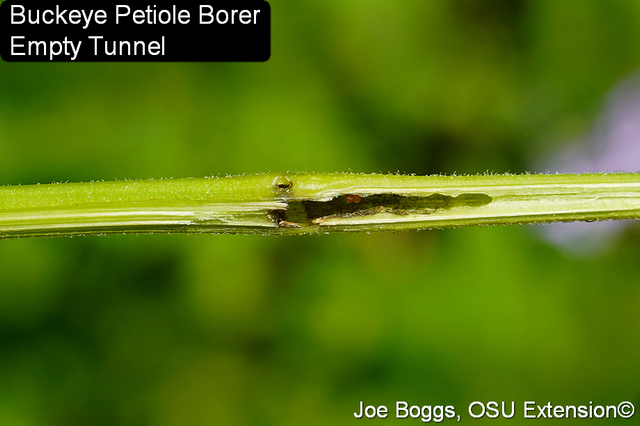 Trees usually only suffer a few damaged leaves.  The hit-or-miss nature of the wilted leaves provides good evidence the damage wasn’t caused by a freeze/frost event.  Damage by this borer may appear conspicuous; however, the caterpillars seldom cause enough leaf loss to affect the overall health of infested trees. 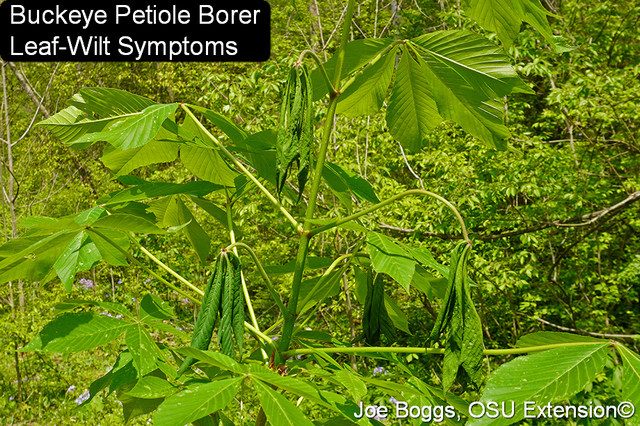 On the other hand, the caterpillars may occasionally bore into the tender new terminal growth on small understory trees.  I reported this observation in a BYGL Alert last year because I’ve never found this type of damage reported in the literature.  Such damage to the main stems of small trees represents a potentially more serious impact compared to the loss of a nominal number of leaves to petiole boring activity. 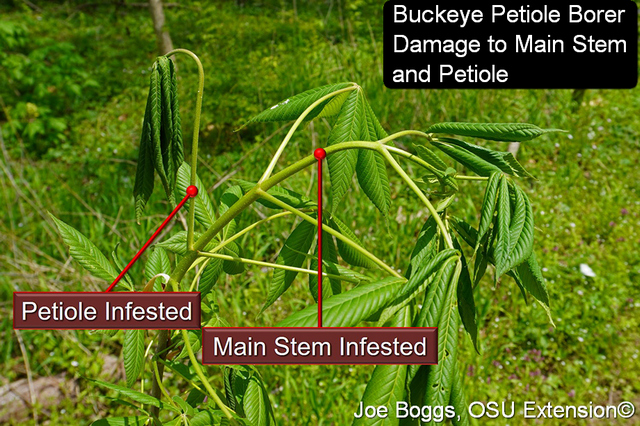 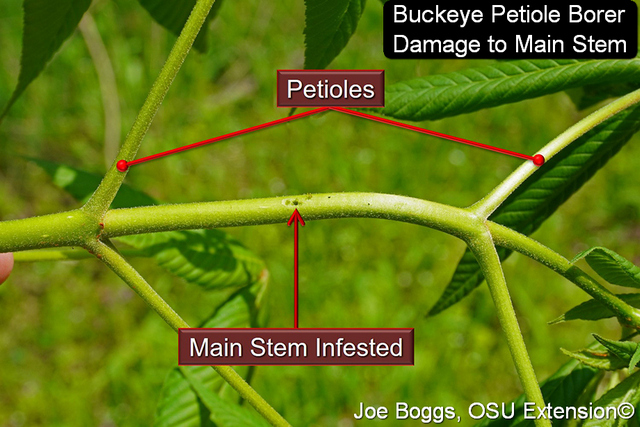 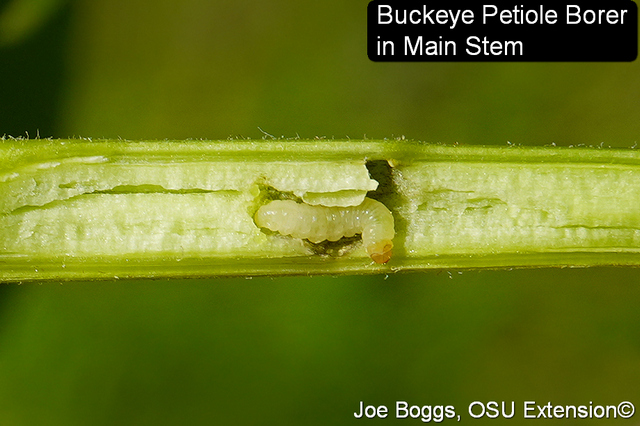 The moth has two generations in Ohio.  Caterpillar development occurs quickly, so the first generation will soon come to an end.

There are no chemical control recommendations given that the damage is usually confined to wild buckeyes growing in wood lots and leaf loss from the petiole borer is seldom significant.  However, I've seen localized populations gradually increase over successive years to eventually produce very noticeable symptoms with the damage caused by the second generation becoming more severe. 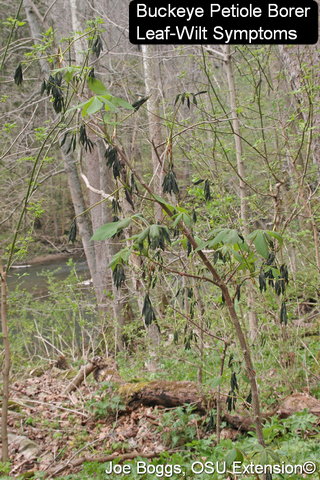 The second step is to destroy the caterpillar within the infested leaves and stomping is highly effective.  Thus far, no populations have become resistant to this control method.