The Splendors of Spring - Part 2

Authors
Carrie Brown
Published on
May 3, 2022 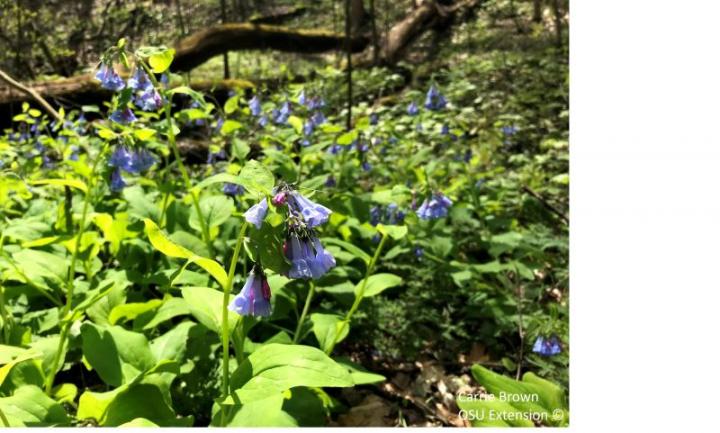 The array of spring ephemeral wildflowers sure has expanded since that chilly day two weeks ago when I posted part one of this series. In fact, where I am located in Lancaster, Ohio we have gained a whopping 123 growing degree days (GDD) since that wintery week! Because of this accumulation of heat, wildflowers are popping left and right. Let’s take a look at a few more.

P.S. If you are interested in learning more about the unique adaptations of our spring ephemerals and how growing degree days and the accumulation of heat are driving plant development, take a look at this Virtual Spring Wildflower Tour video. 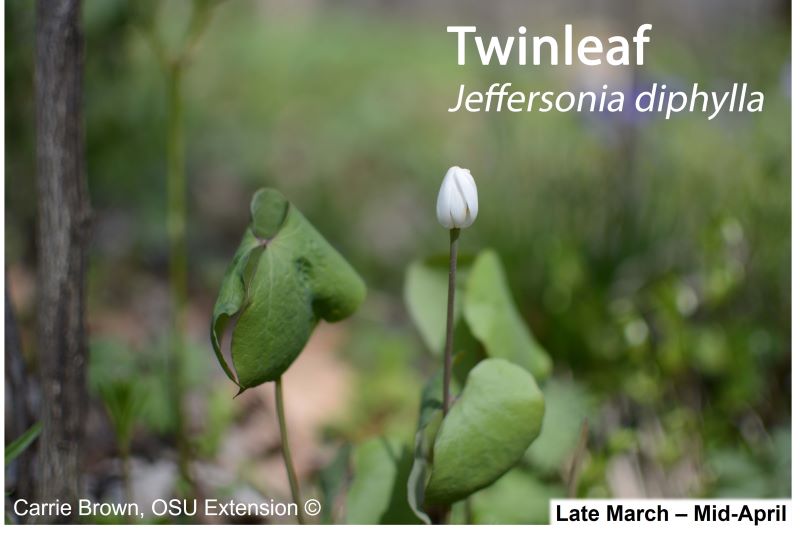 Our virtual wildflower walk continues with one of my personal favorites, twinleaf. Like bloodroot that was featured in my last post, this species sends up a solitary white flower. Its leaf has two perfectly symmetrical leaflets that resemble a pair of butterfly wings and stand on smooth, purplish stems. Twinleaf’s short-lived flowers develop into an interesting fruit that resembles a green acorn. 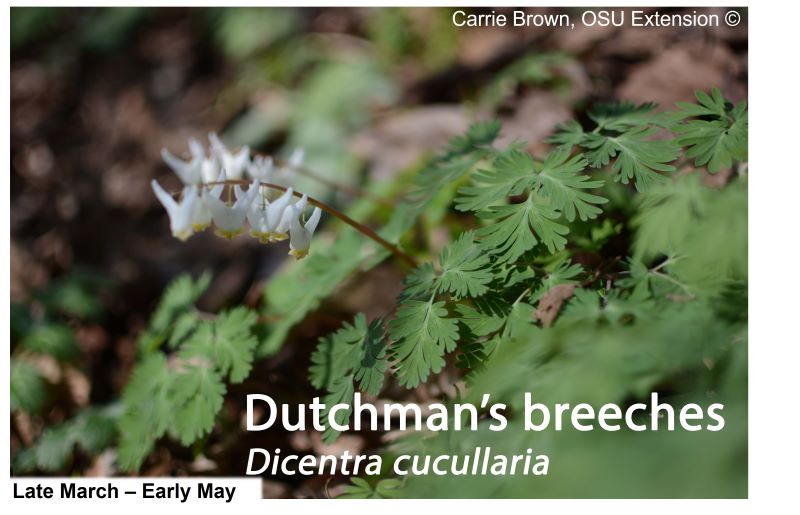 Coming in first place for the most entertaining name is dutchman’s breeches. Named after its flower’s resemblance to a pair of upside-down pantaloons, this species is in the same genus as the bleeding-heart you might find at a garden center. This dainty wonder is fairly common throughout the eastern United States and prefers moist to well-drained soils. Bumble bees are its chief pollinators, and its seeds are dispersed by ants. 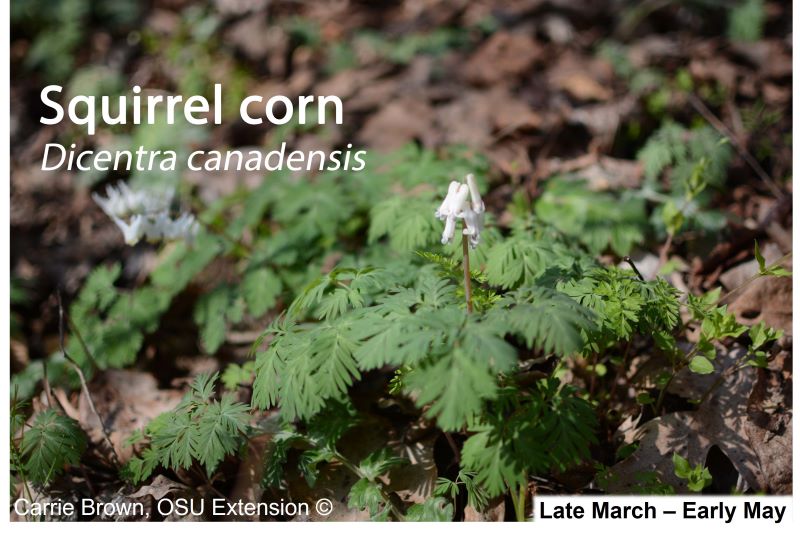 A close relative to dutchman’s breeches is squirrel corn. With foliage that looks nearly identical, the flower of this species lacks the defined “pant legs” of the breeches above. Rather, their heart-shaped blooms (apparently) resemble a kernel of corn with their rounded spurs. Often found growing right next to its trouser-shaped cousins, it returns to dormancy by mid-summer. 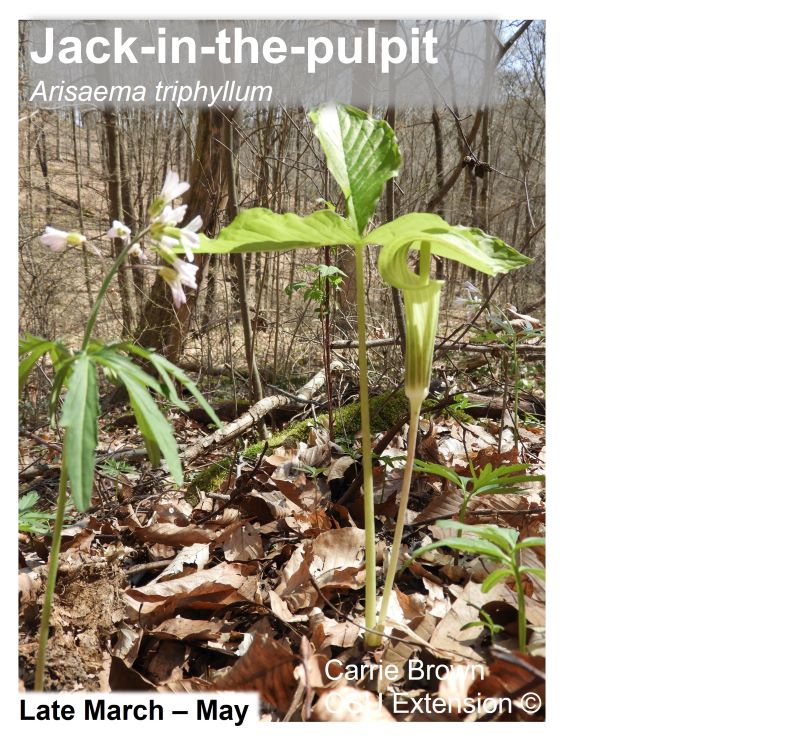 In the same genus as several other exotically-named species (including green dragon and cobra lily), Jack-in-the-pulpit is found in rich, moist woodlands and can have a lifespan of more than 25 years. Its tiny flowers are found on the spike (“Jack”) that arises from the green- and maroon-striped leafy spathe (“the pulpit”) and are pollinated by small flies. Its leaves of three arise separately from the flower. Pollinated flowers will give way to bright red berry clusters in the fall that are coveted by birds and rodents. 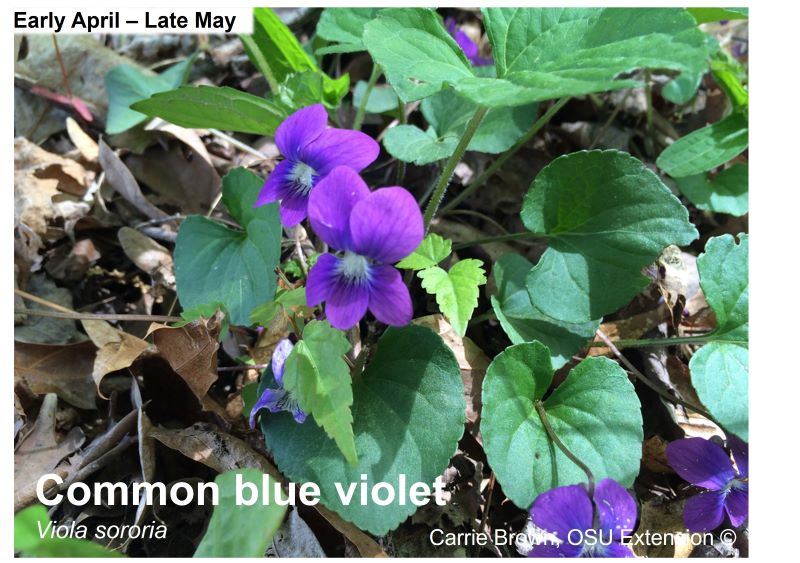 The spring wildflower species that you are most likely to see growing in your lawn or garden, this ubiquitous perennial can be found in white, blue, or purple. Notoriously promiscuous, violets hybridize easily and self-seed like no one is watching. They are an important host plant for many fritillary butterfly caterpillars, and like many spring ephemerals, its seeds are distributed by ants. 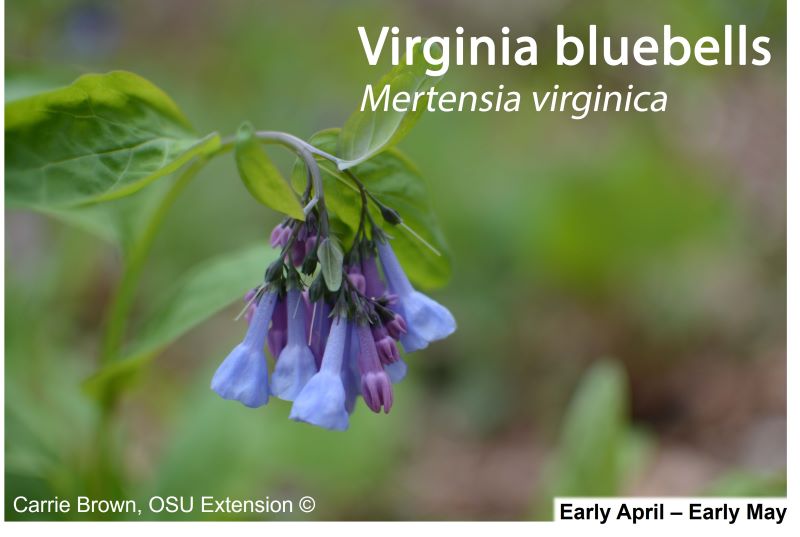 All heads turn when Virginia bluebells enter the room – this species is a fan favorite! One of our native spring wildflowers that you are most likely to find for sale in garden centers, few can deny its beauty. With clusters of light blue trumpet-shaped flowers, Virginia bluebells make quite the impression, especially when growing in mass along wooded floodplains. Blooms attract long-tongued bees, moths, butterflies, and even the occasional hummingbird. However, don’t blink, as this species is short-lived in the spring, withering back to dormancy quickly after flowering.

Take advantage of this warmer weather to get outside and view some of these beauties in person at a woodland near you!