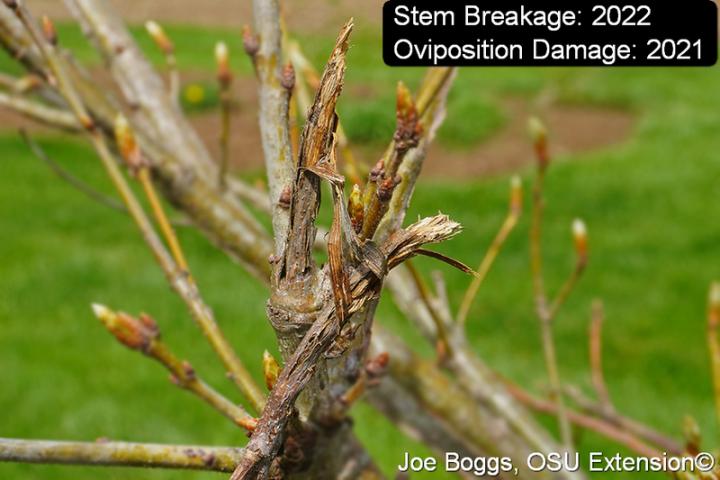 It’s been about a year since Brood X (10) of the 17-year Periodical Cicadas (Magicicada spp.) serenaded us with their cacophonous love songs.  They are long gone, but can't be forgotten.  Their damage continues to plague trees in the landscapes and forests of Ohio. 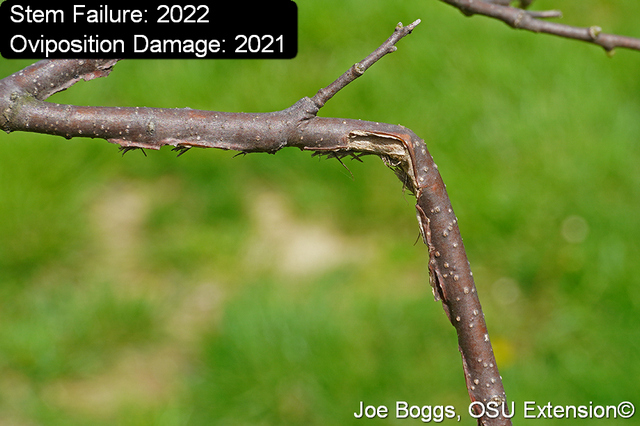 Although cicada females have long piercing/sucking mouthparts and they use their mouthparts to suck sap like giant aphids, their feeding damage is considered inconsequential.  The tree stem damage is caused by equipment located at the other end of their bodies. 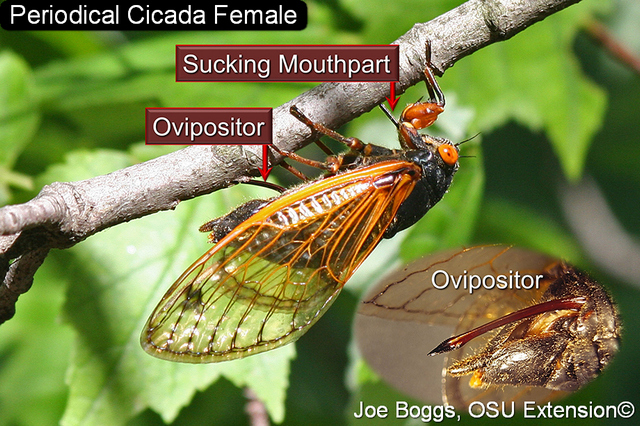 Female cicadas possess sharp, spade-like ovipositors (ovi = egg).  They use their pointy ovipositors to insert eggs through the bark and phloem and into the white wood (xylem) of small branches and twigs.  The resulting damage splits the stems leaving deep furrows of ruptured tissue. 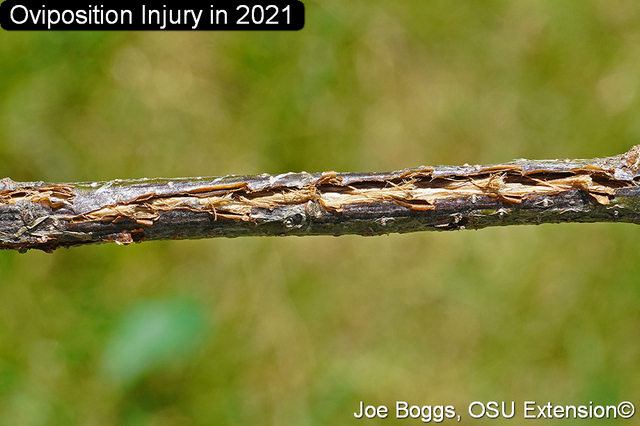 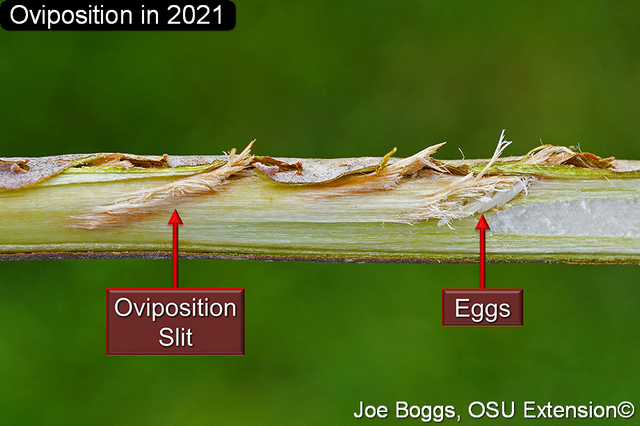 The oviposition injury may be so severe it completely disrupts the vascular flow of water in the xylem.  As a result, the leaves beyond the damage wilt and turn brown producing a characteristic symptom called “flagging” owing to its resemblance to flagging tape. 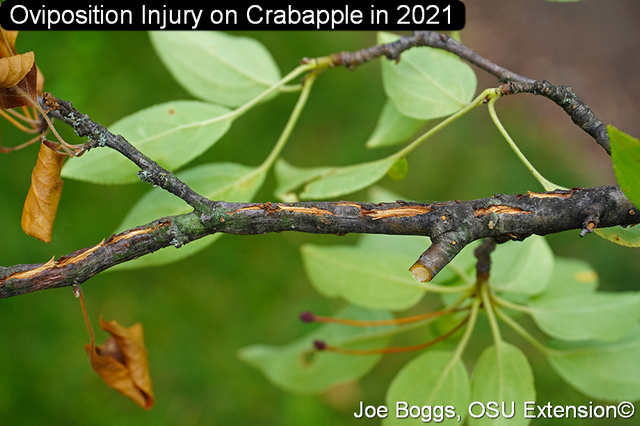 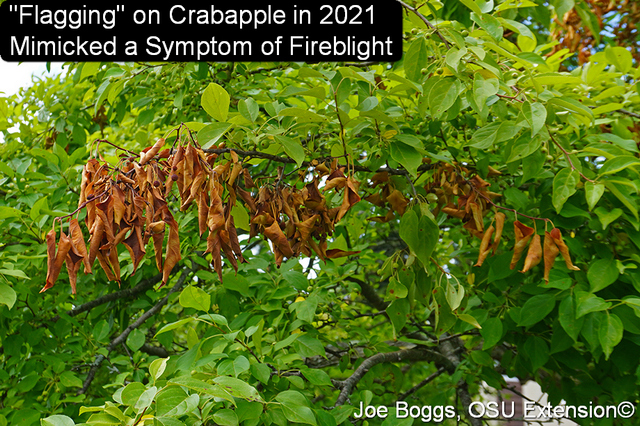 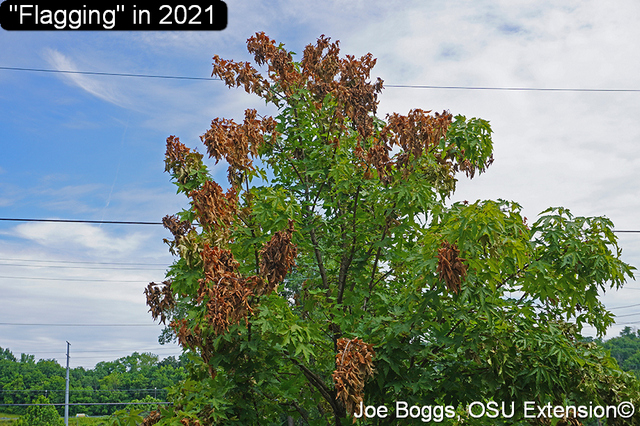 If the damage causes a complete loss of the structural integrity provided by the xylem, the stems detach and drop to the ground which is a good thing for the nascent cicadas.  The soil is the ultimate destination of the first instar cicada nymphs that hatch from the eggs.  Once in the soil, they migrate to tree roots where they attach themselves to sip the essence of root for the next sixteen or twelve years depending on if they’re a 17-year or 13-year periodical cicada. 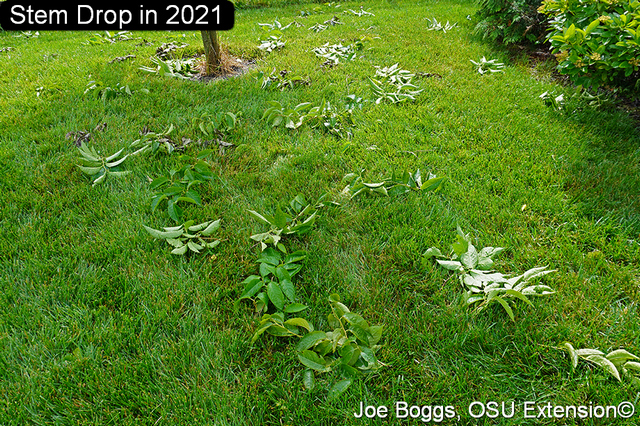 Out of Sight, Out of Mind

The stem damage will remain to plague trees for several years.  Typically, the greatest number of stems expressing a delayed response to the original oviposition damage occurs the first season after a periodical cicada emergence.  The effect declines with each successive season; however, some damage will remain evident for many years. 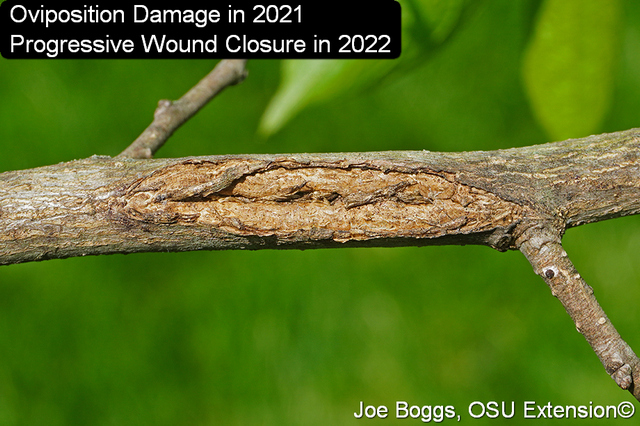 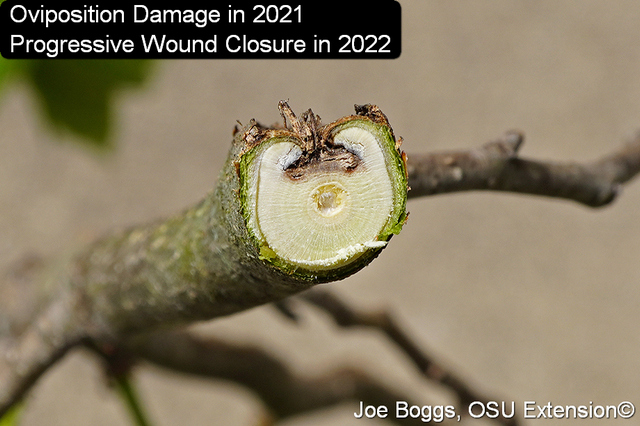 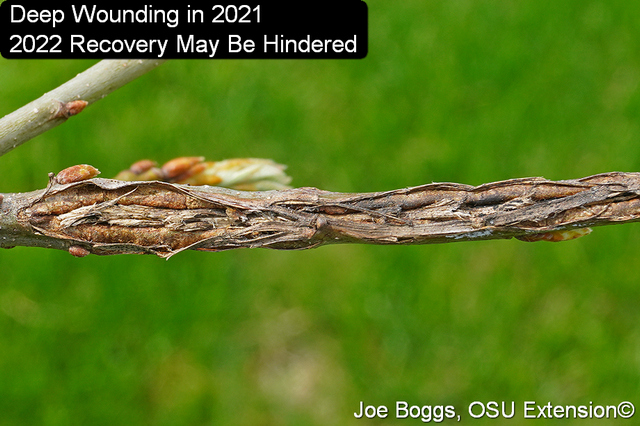 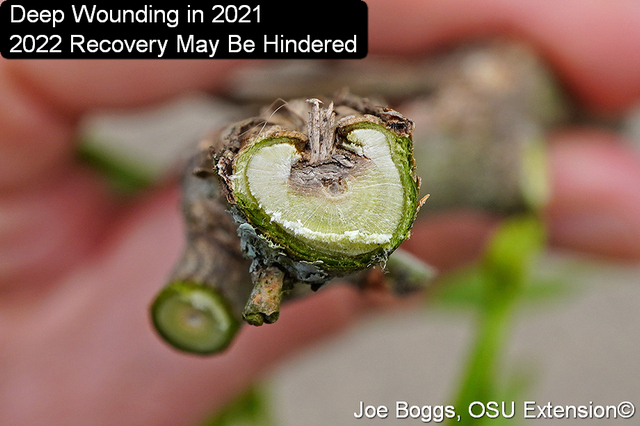 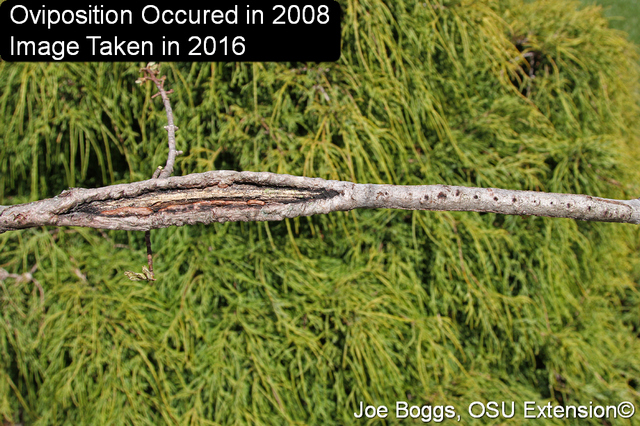 Although Brood X (10) of the 17-year periodical cicadas dominated the news in southwest Ohio at this time last year, landowners may not connect the current stem injury to last year’s cicada emergence.  Tree care professionals and Extensioneers should expect questions from clientele asking for a diagnosis of cicada oviposition injury.

The diagnostic questions may focus on the deep furrows usually on the undersides of small stems.  Or clientele may be asking about broken stems on the ground or clinging to trees.  This symptom becomes most common following high-wind events.  Flagging has not yet been an issue as leaf expansion is still underway.  However, I suspect that symptoms will soon become apparent. 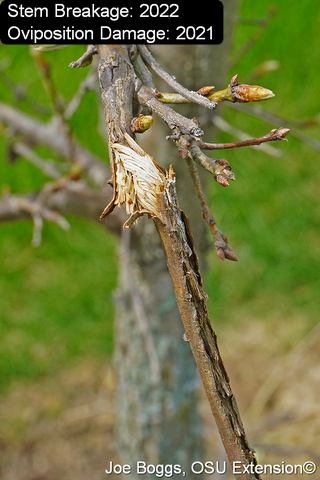 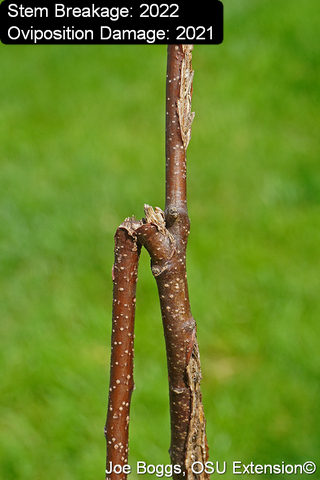 Of course, nothing can be done to address the issue other than to prune frayed stems after the distal ends have broken off.  Preemptive pruning to remove heavily damaged stems before they break and/or leaves wilt and die should not progress beyond selective pruning to improve branch structure.

Deciduous trees handle cicada oviposition damage through wound closure.  I’ve observed some wounds that are almost completely closed.  On the other hand, stems may flag or break if the damage was extensive last year.

The “periodical” in common name for cicadas belonging to the genus Magicicada stems from the cicadas taking 17 or 13 years to complete their development out-of-site in the soil.  Adults emerge en masse in the spring.  The name of the genus captures the almost magical appearance of these insects:  Magi- comes from the Ancient Greek magos which means “magician.”

However, periodical cicadas have a few other tricks up their tarsal sleeves.  Don’t be surprised if you see or even hear periodical cicadas this spring in parts of Ohio where Brood X cicadas emerged last year.  It’s common for these so-called “stragglers” to appear a year after the mass brood emergence.  It’s also not unusual for a few periodical cicadas to emerge one or two years before their scheduled appearance.

Ohio is a Special Cicada Place

We’re not scheduled to see another periodical cicada brood emergence in Ohio until 2025 with the appearance of Brood XIV (14) which is primarily confined to the southern part of the state.  The Buckeye State periodically “enjoys” the appearance of four different broods of 17-year cicadas and one brood of the 13-year cicadas.  It’s an entomological twist on our state’s official brand, “Ohio. find it here.” 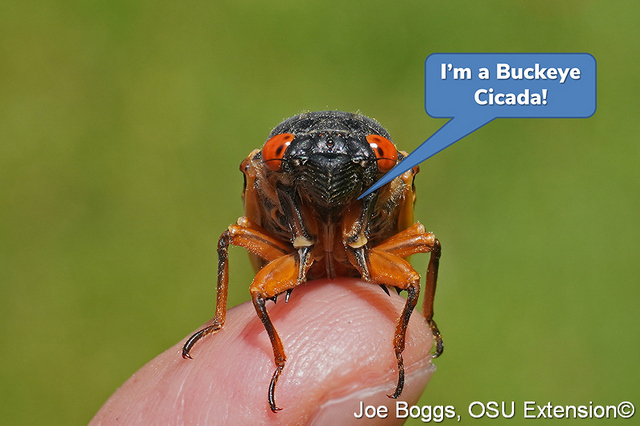 On a final note, periodical cicadas are not locusts.  Locusts are grasshoppers.  The mistaken identity originated with early European colonists who had never seen cicadas before or the Biblical locust plagues for that matter.  However, the mass emergence of a periodical cicada brood appeared like something straight out of the pages of Exodus (10:1–20).  Interestingly, the "weeeee-whoa" song of M. septendecim is sometimes described as sounding like “Pharaoh” no doubt adding further weight to the mythconception.