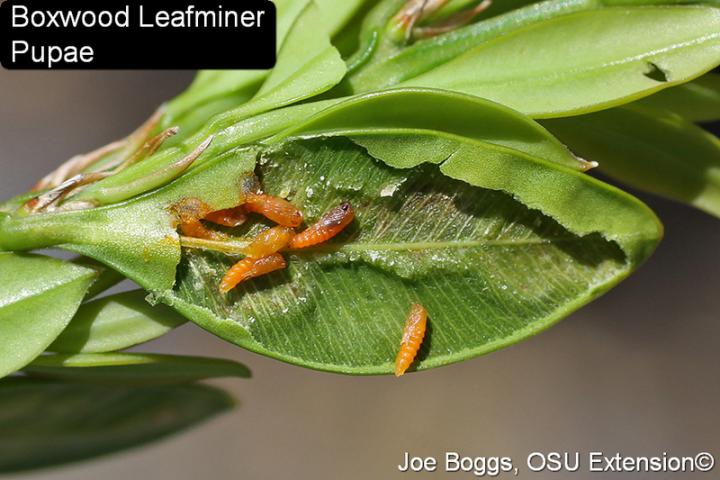 The boxwood leafminer (Monarthropalpus flavus, family Cecidomyiidae) is a European import first reported in the U.S. in the early 1900s.  The exact timing of its accidental introduction is not known, but it’s suspected the leafminer may have arrived in the U.S. as early as the 1600s when boxwoods were first planted in U.S. gardens.

The non-native midge fly is now common on its namesake host throughout Ohio.  Its leafmining activity produces symptoms at this time of the year that may be mistaken for winter injury. 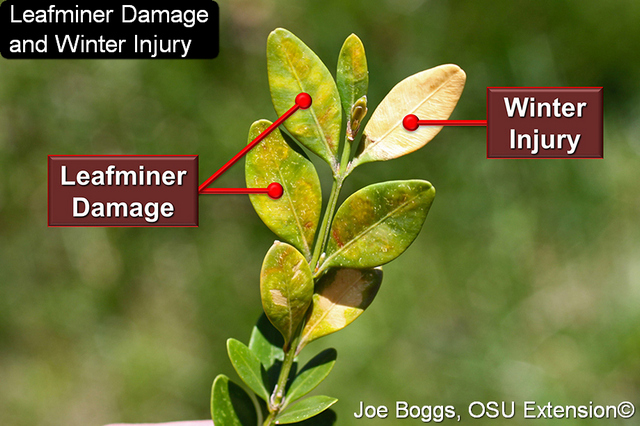 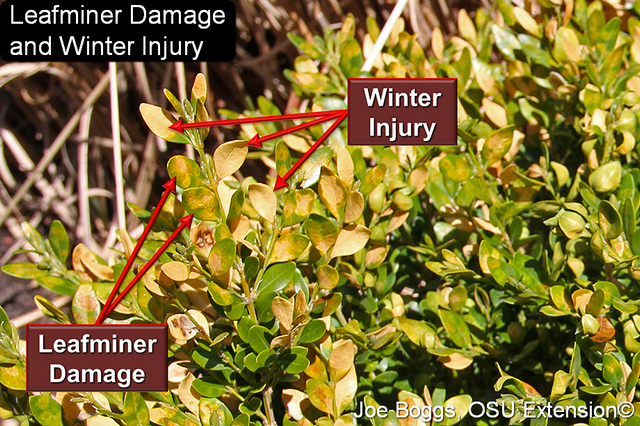 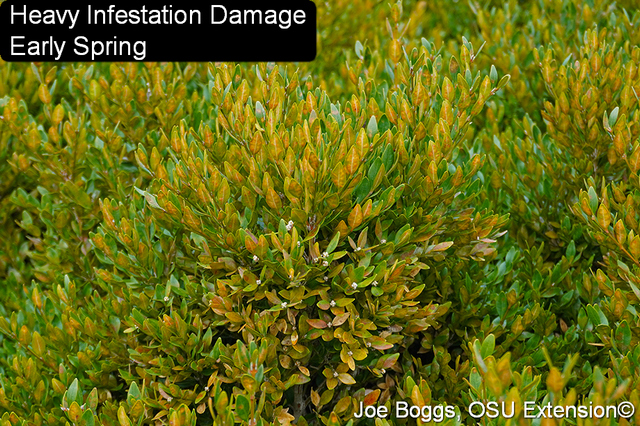 Except for their bright orange abdomens, the delicate adults superficially resemble miniature mosquitoes.  They may be seen swarming around their boxwood hosts and large numbers commonly collect in spider webs which is a disastrous outcome given that the adults only live for about a day. 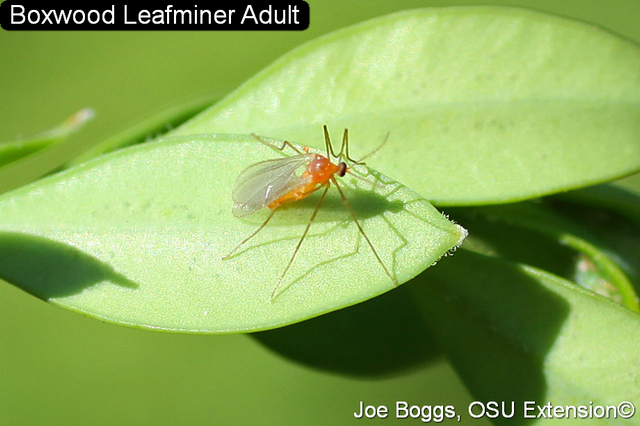 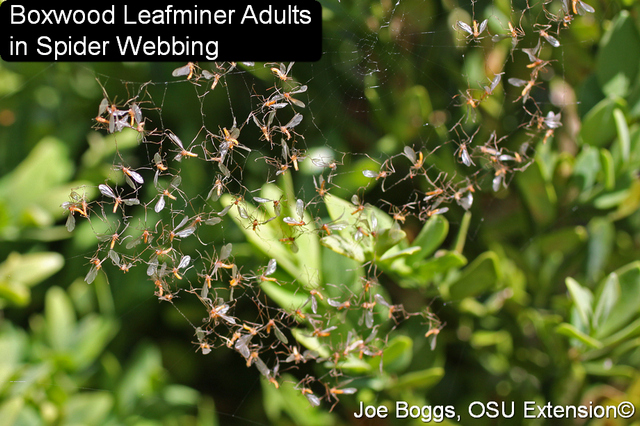 Boxwood leafminer females use their needle-like ovipositors to insert eggs between the upper and lower leaf surfaces of boxwood leaves.  Oviposition only occurs on new growth.  Each leaf may contain multiple oviposition sites with several eggs per site.  These sites will become individual leafmines producing blister-like leaf symptoms. 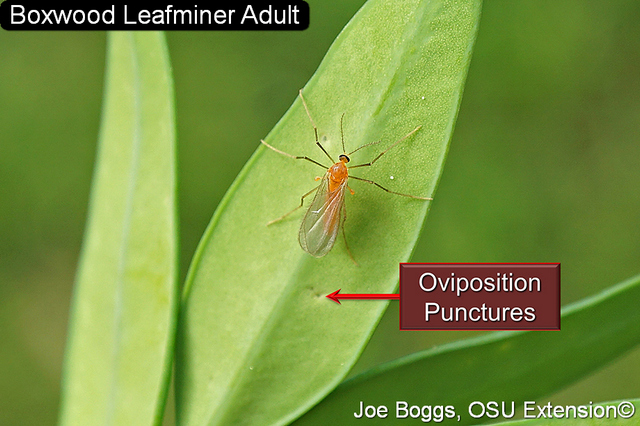 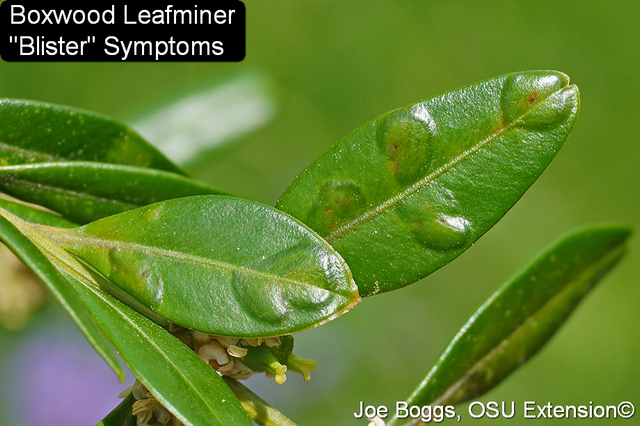 Eggs hatch in early summer and the resulting maggots spend the remainder of the season consuming interior leaf tissue as they develop through the 1st and 2nd instar stages.  There is some evidence that the maggots pause in their feeding and development during the summer; a physiological condition known as aestivation (= estivation).  They resume feeding in late summer to early fall. 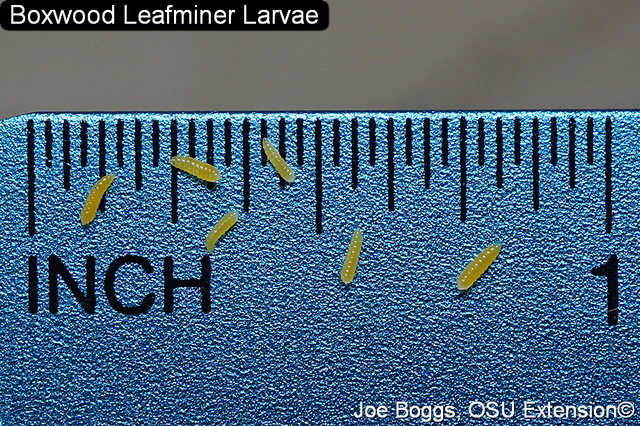 Winter is usually spent as 3rd instar midge maggots inside the leafmines.  The maggots resume feeding in the spring and develop through a 4th instar stage.  Much of the leaf damage occurs in early spring with the ravenous maggots rapidly delaminating the upper and lower leaf surfaces as they expand their leafmines. 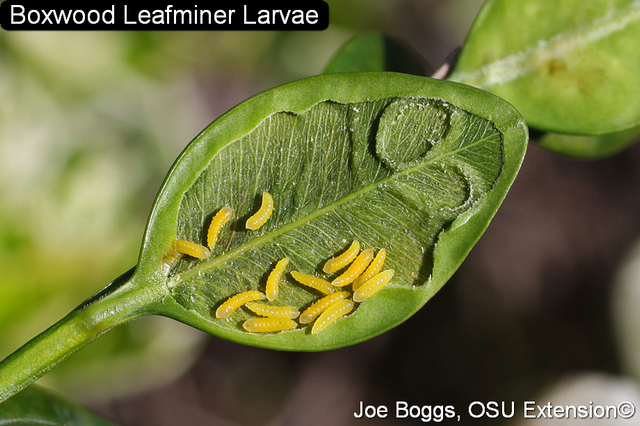 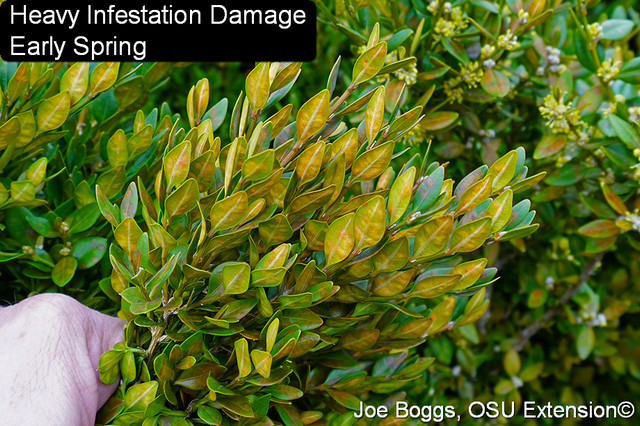 The maggots scour the tissue near the lower leaf surface just before they pupate leaving a thin layer of epidermal cells to create a windowpane-like effect.  This odd feature is now visible on boxwood leaves in southwest Ohio and most of the leafminer maggots have pupated.  The pupae change colors as they mature from the light yellow color of the maggots to orangish-yellow and finally reddish-orange. 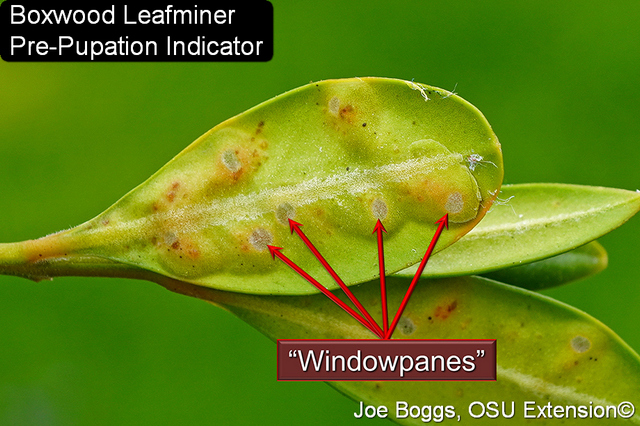 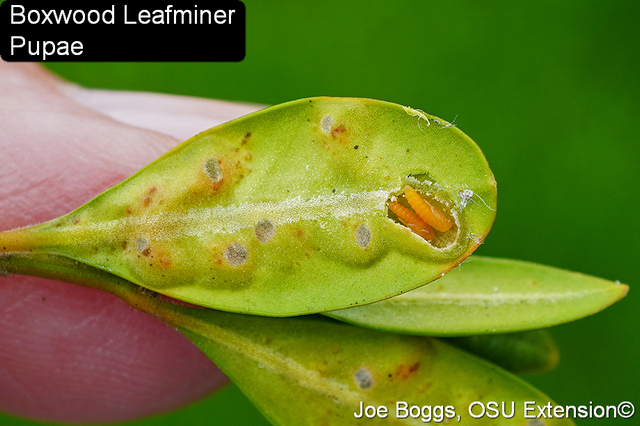 Eventually, the pupae will wriggle through the “windowpanes” giving the delicate adults unencumbered access to the outside world.  Adult emergence is heralded by pupal skins (exuvia) hanging out of the leaves. 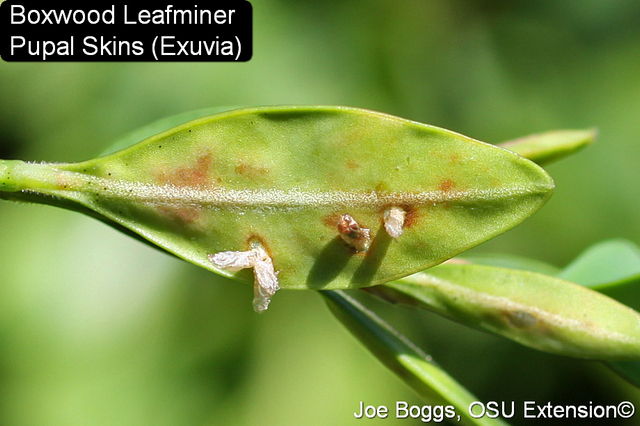 We’ve received numerous reliable reports over the years of snapping or crackling sounds emanating from heavily infested boxwoods in the spring.  It has been suggested that the sounds are generated as the heavily sclerotized pupae push through the thin, dry tissue of the “windowpanes.” 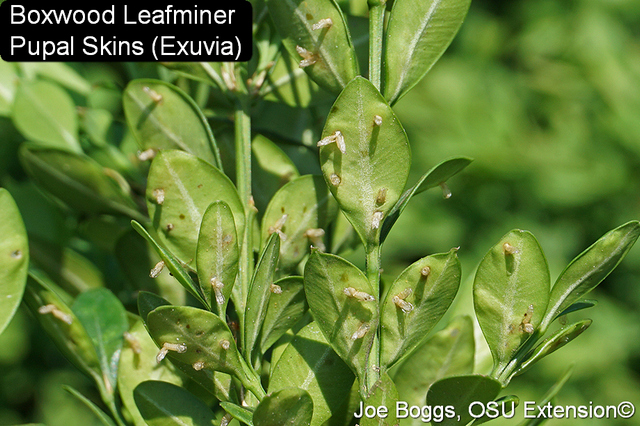 However, noises have also been heard from boxwoods before the maggots pupate. This has led to speculation that the unusual sounds arise as the upper and lower leaf surfaces further delaminate in heavily mined leaves with the dried-out tissue acting like tiny banjo resonators to amplify the sound. 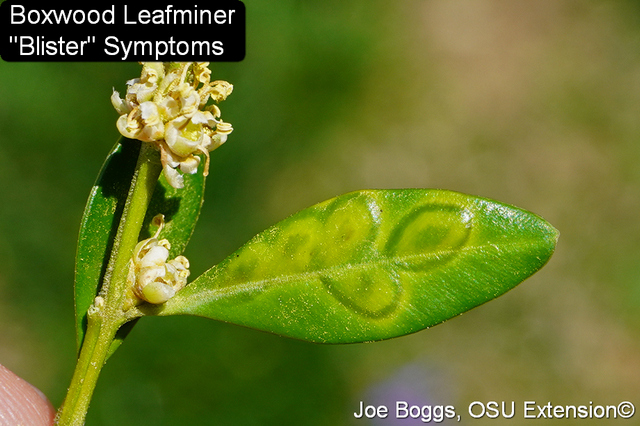 Whatever the cause, reports from gardeners or landscapers who have heard boxwoods going snap, crackle, and pop should be taken seriously.  The odd sounds are an indicator of a heavy boxwood leafminer infestation. 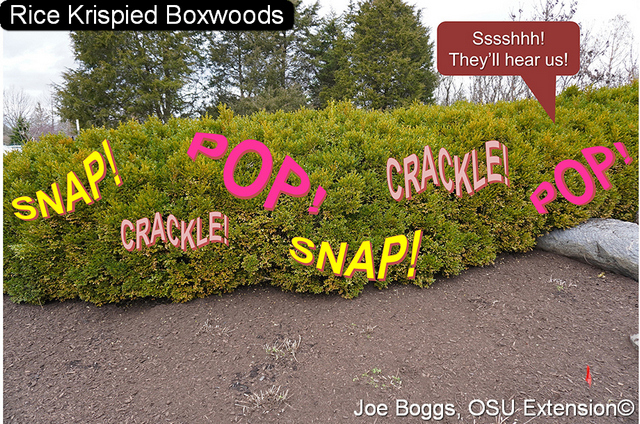 Last year, I observed heavy bird predation of boxwood leafminer maggots or pupae.  I’ve not seen the damage this year, but last year’s damage remains visible and commonly exceeds the aesthetic injury produced by the leafminer. 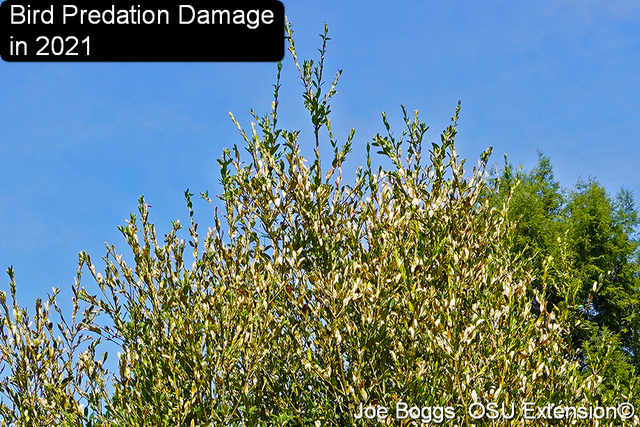 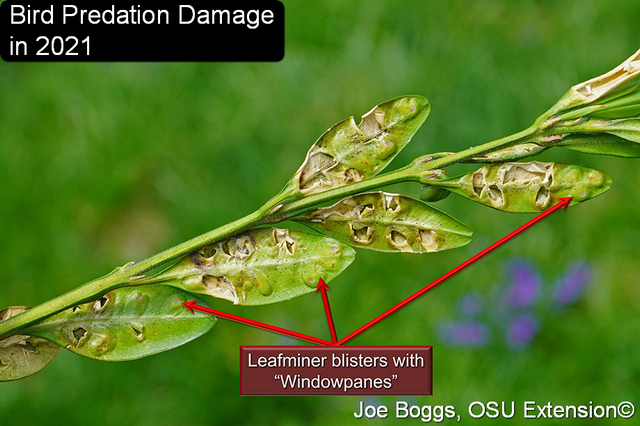 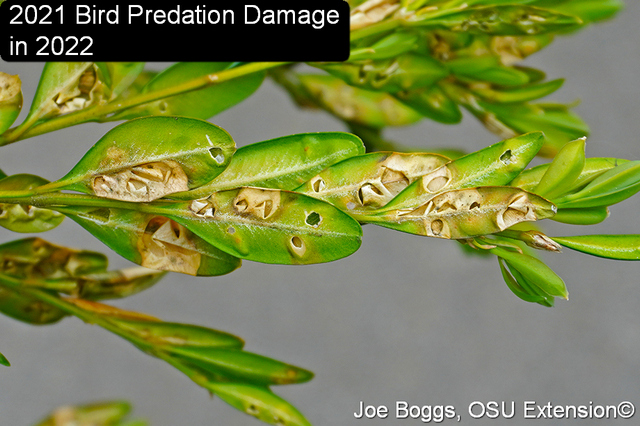 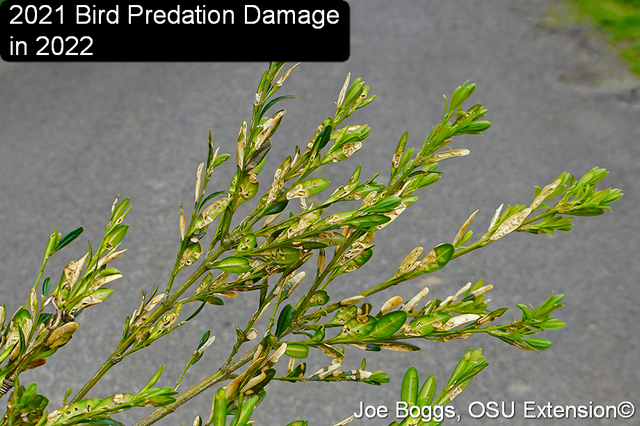 This is not the first observation of birds preying on the boxwood leafminer meat morsels.  Quoting from Gabriel John d'Eustachio’s M.S. Thesis (see “Additional Resources” below): “The only predators that seem to have a significant effect on boxwood leafminer populations are predatory birds, primarily titmice (family Paridae). As noted earlier, they do serious damage to the plants to locate the mature larvae, and can destroy most of the infested leaves on a given plant. Damage done by birds appears more significant than that done by insects.”

There is a wide range of susceptibility among boxwoods to the depredations of the boxwood leafminer.  Summaries of host preference trials as well as credible grower observations are provided in the publications listed under “Addition Resources” below. Hotlinks for each publication are provided.

Of course, insecticide applications remain an option to manage boxwood leafminer on older more susceptible boxwoods.  This is particularly important if the boxwoods cannot be easily replaced owing to their size and importance in landscape designs.

Timing is critical for both systemic as well as foliar applications.  The systemic neonicotinoid imidacloprid (e.g. Merit, Xytect, etc.) has shown good efficacy against boxwood leafminer; however, applications should be made after flowering to reduce the possible indirect risk to pollinators by exposure through the flowers. 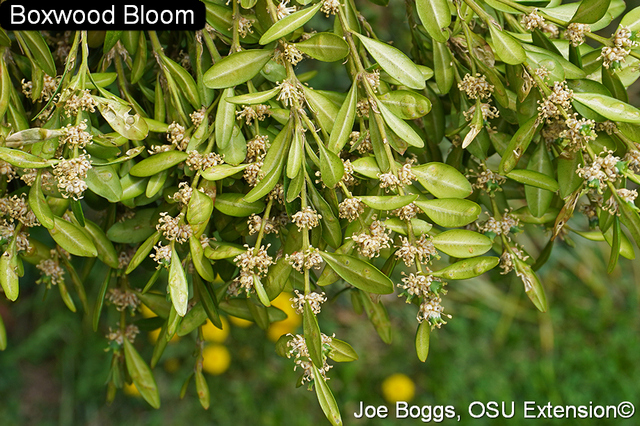 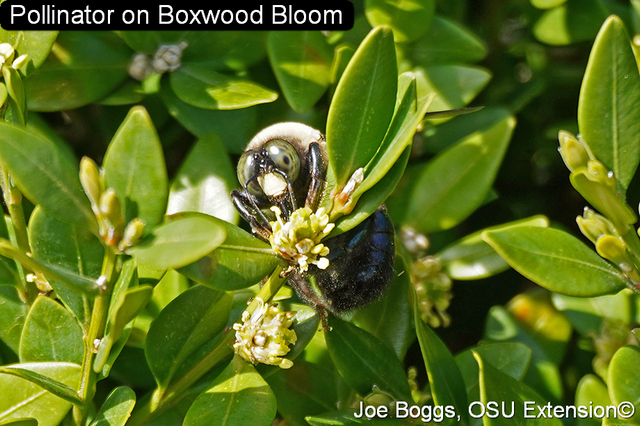 The downside with using imdicloprid is the possible unintended consequences posed by stimulating a secondary pest outbreak.  Research has shown a direct link between the application of imidacloprid and a rise in the abundance of boxwood spider mites (Eurytetranychus buxi) on its namesake host.  I once considered this spider mite to be nothing more than an oddity.  However, in recent years, stippling damage by the mite has become increasingly common. 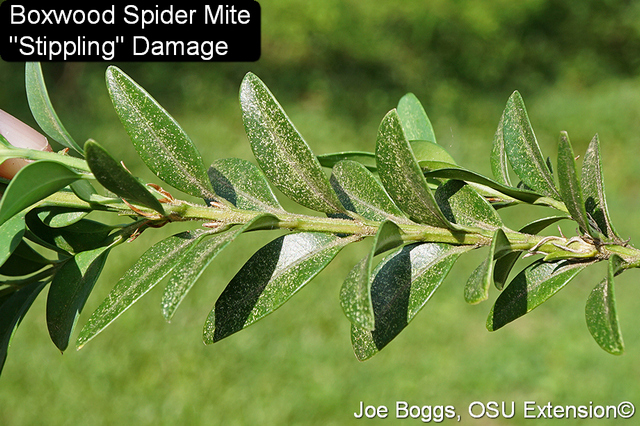 Abamectin (e.g. Avid) applied during adult emergence provides another option. Abamectin is not a systemic insecticide like the neonicotinoids; however, it does have translaminar activity and the leaf penetration presumably kills the first instar maggots.  This natural fermentation product also has good activity against spider mites.