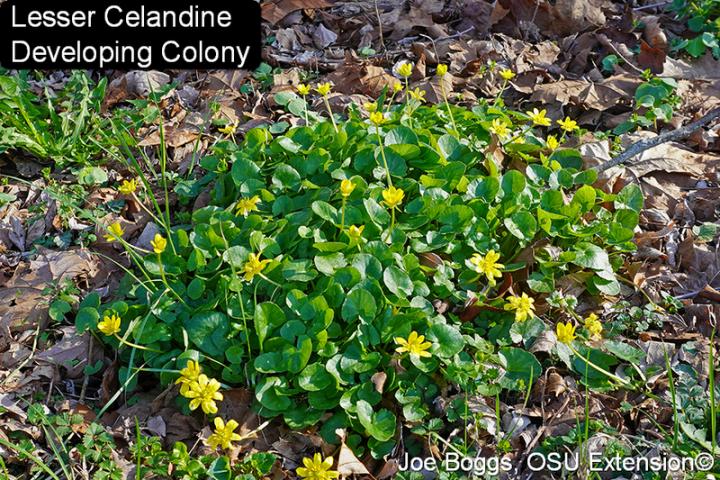 Lesser Celandine (Ficaria verna (previously Ranunculus ficaria)) is known as a "spring ephemeral" owing to the time of year when short-lived plants and flowers are present.  The majority of this weed's hide-and-seek life cycle is spent hidden from view as underground tubers.  Bright yellow buttercup flowers are now revealing infestations in southern Ohio. 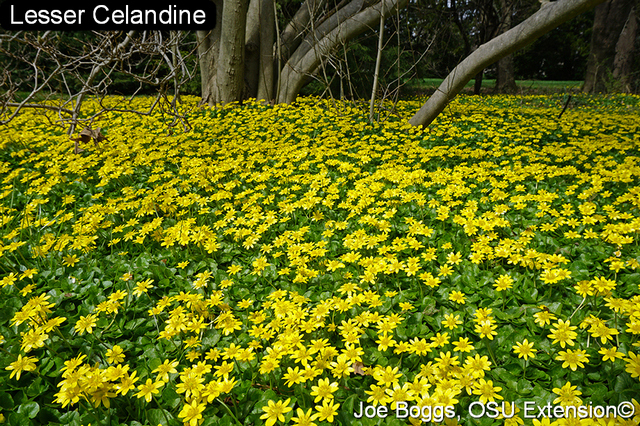 This non-native highly-invasive weed belongs to the buttercup family, Ranunculaceae, and is sometimes called "fig buttercup."  The "fig" refers to the shape of the underground tubers and the "buttercup" describes the flowers. 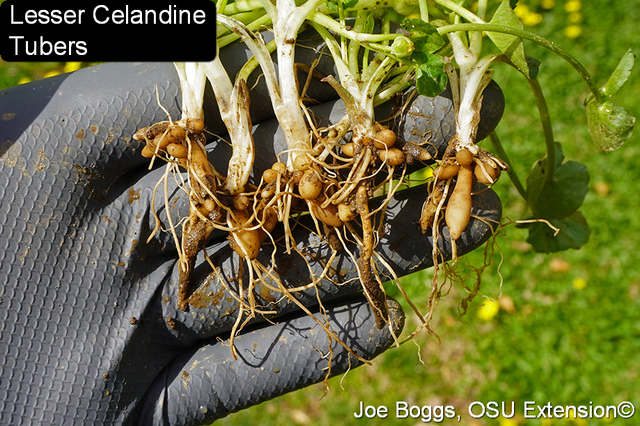 The Ugly Nature of a Beautiful Plant 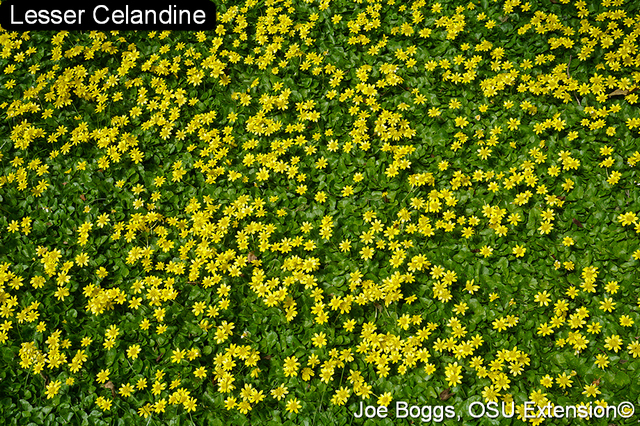 Dense colonies were originally associated with moist soils near streams or around spring seeps.  Lesser celandine continues to be found in these locations; however, lush aggregations are now commonly found blanketing well-drained hillsides and hilltops in Ohio. 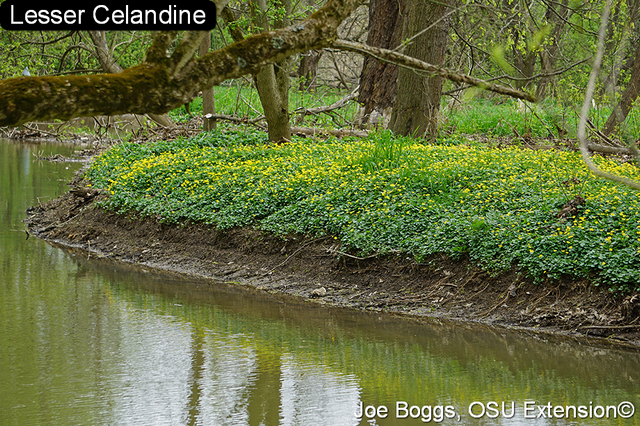 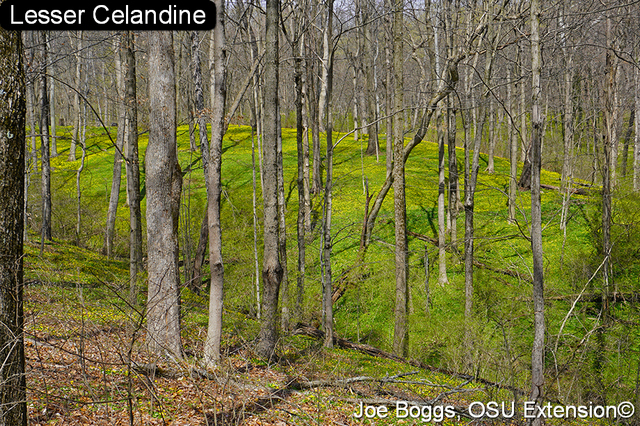 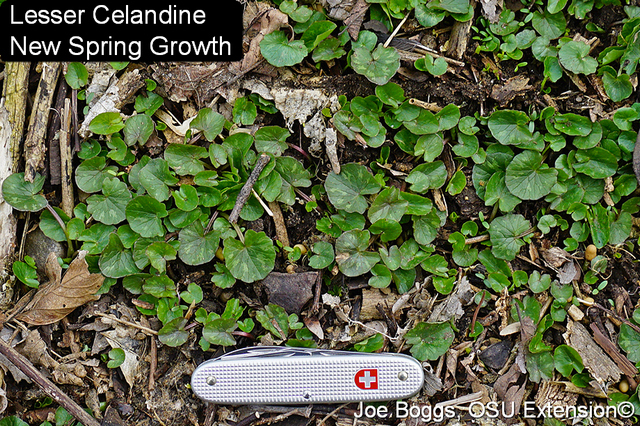 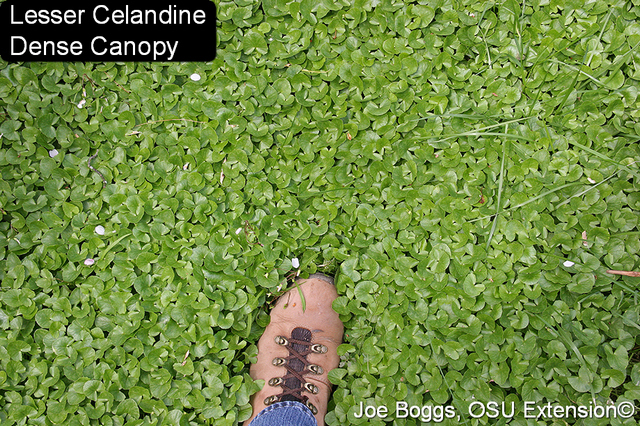 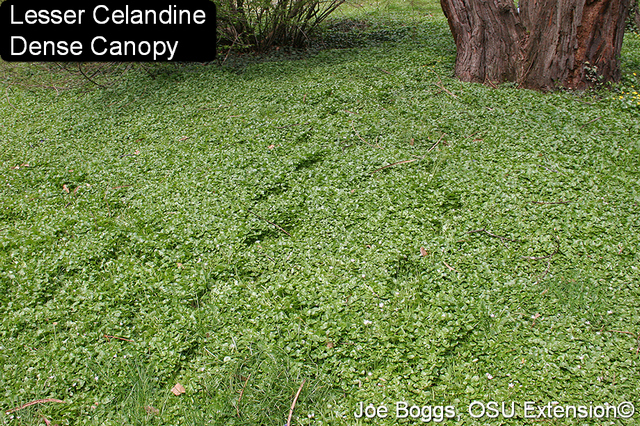 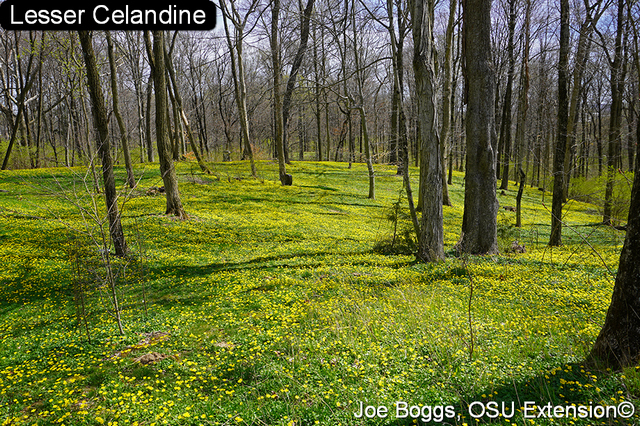 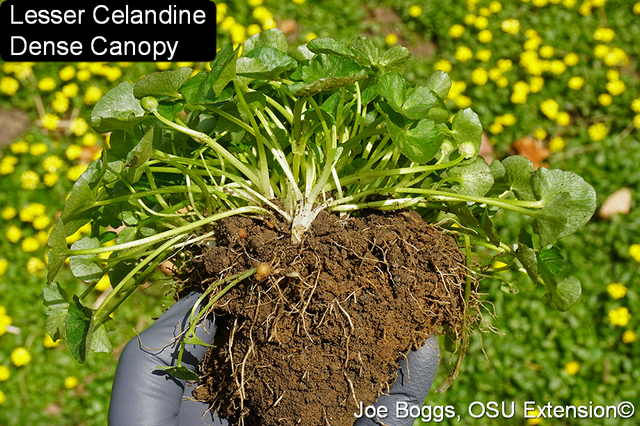 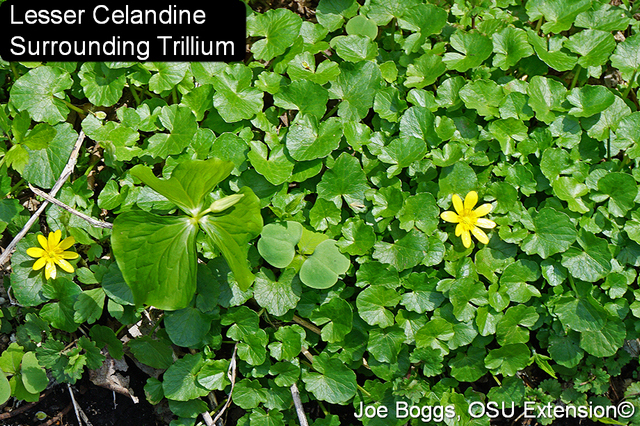 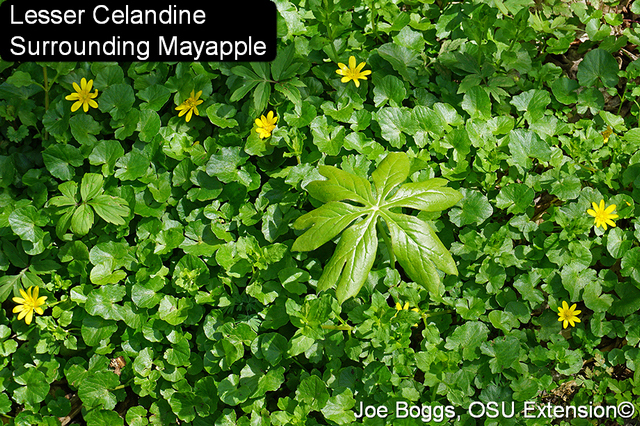 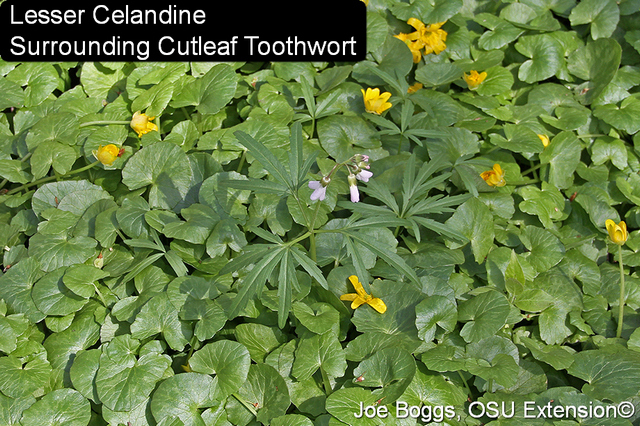 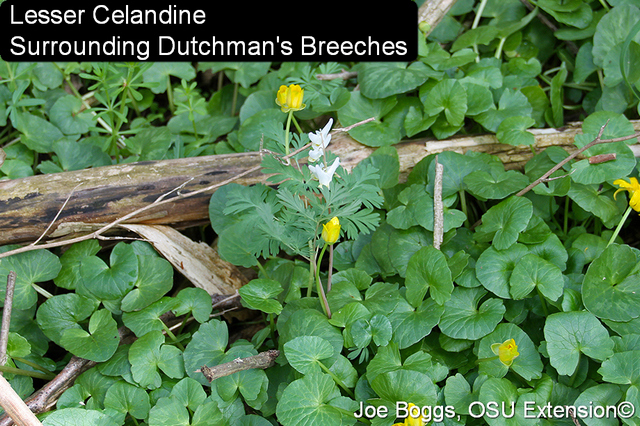 Negative impacts on fragile forest flora is one reason lesser celandine is included on the Ohio Department of Agriculture's List of Invasive Plants.  Plants on the list were prohibited from being sold or distributed in Ohio.

You can see this list by clicking on the hotlink below:

Take care not to confuse our native Marsh Marigold (Caltha palustris) with lesser celandine.  Both are spring ephemerals that belong to the buttercup family with plants sporting similar-looking yellow flowers.  However, lesser celandine flowers have 3 green sepals and 7–12 yellow to faded yellow petals.  Marsh marigold flowers have 5–9 yellow petal-like sepals.  Marsh marigold leaves are also much larger, and plants lack underground tubers and above-ground bulbils.  Of course, as its common name implies, marsh marigold does not wander far from wet environs. 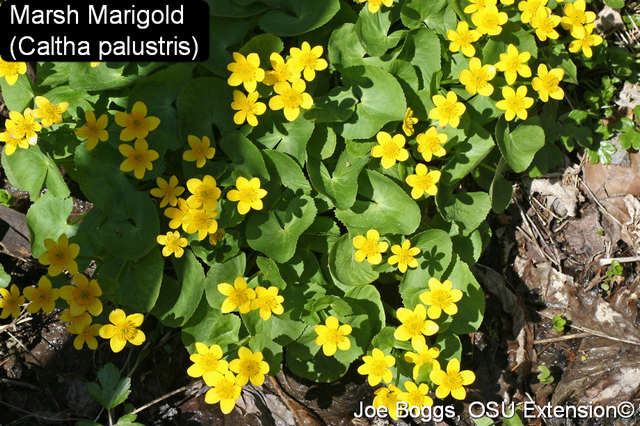 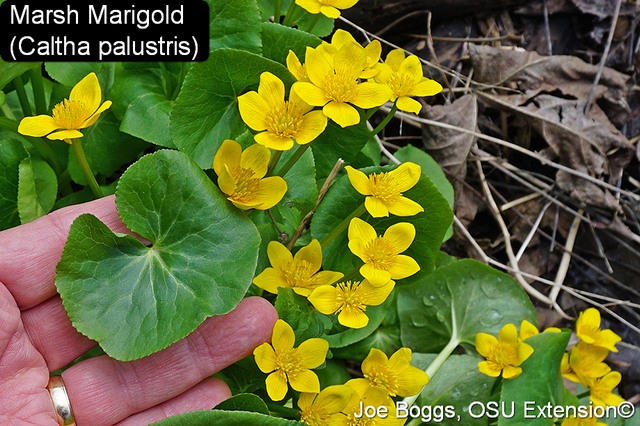 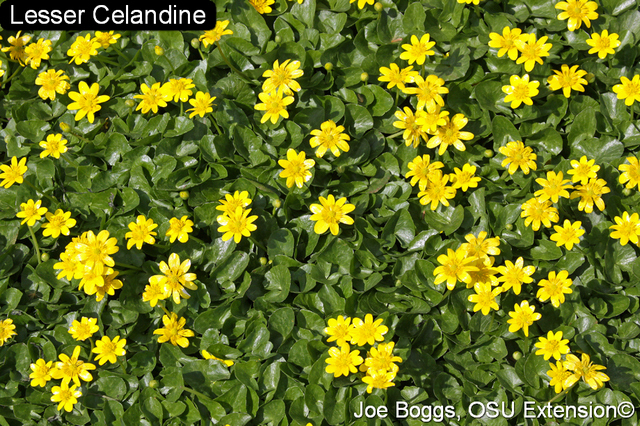 Lesser celandine has three secret weapons for survival and spread.  The first is a stockpile of underground tubers produced in the spring that are used to store carbohydrates shipped down from the leaves during their brief spring appearance.  The energy cycle reverses the following spring with the tubers supporting new leaf growth.  Of course, the tubers can also serve as a foundation for new infestations if they are moved around in contaminated soil. 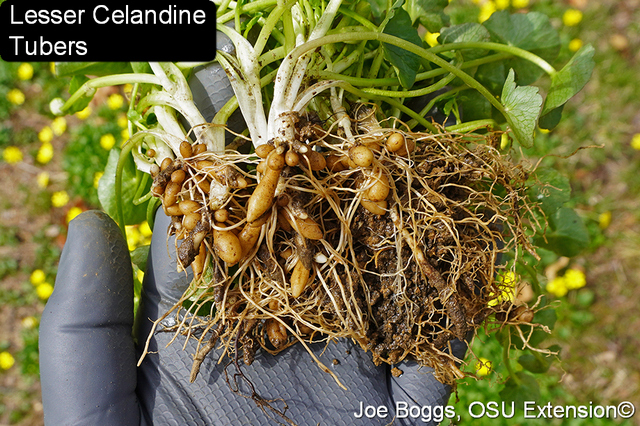 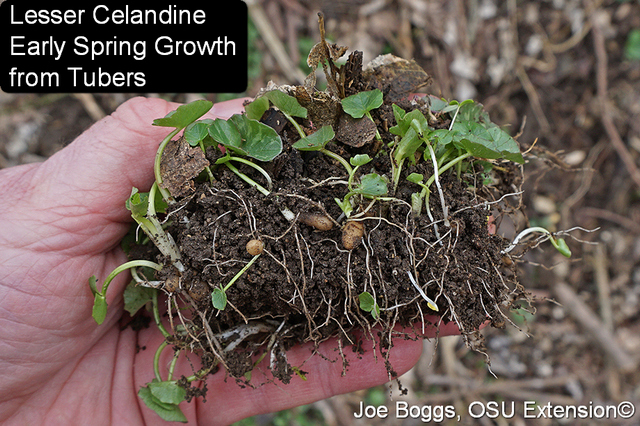 A close examination of leaf axils near the base of mature plants later this spring will reveal the second secret weapon:  the aforementioned football-shaped protuberances called bulbils.  Bulbils can give rise to new plants and are perfectly suited for being picked up in the dewclaws of deer.  Indeed, deer have been implicated as a major mover of lesser celandine with new plants often sprouting on or along deer trails. 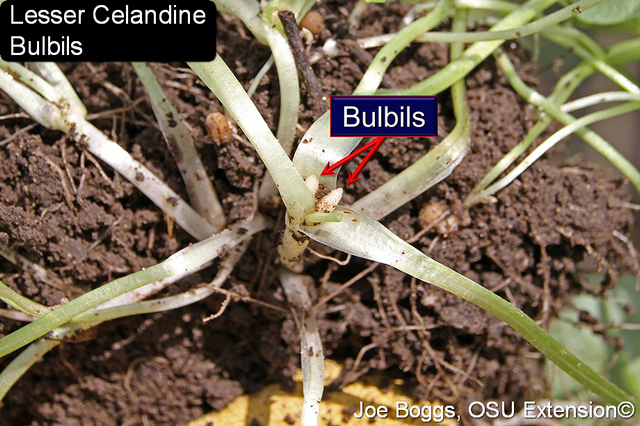 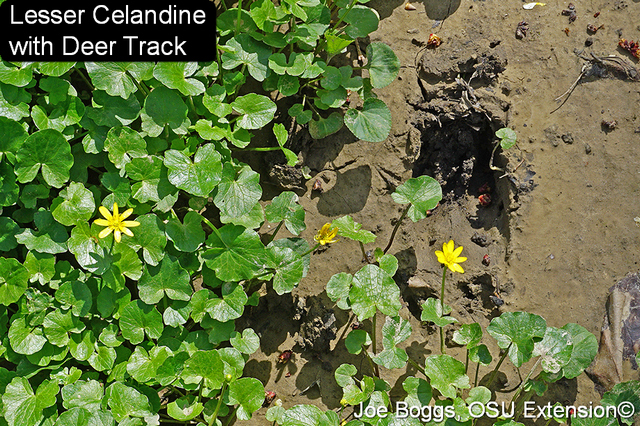 Lesser celandine's final secret weapon is its radical ephemeral nature.  Plants collapse and disappear from view in late spring to early summer depending on environmental conditions.  It's amazing how rapidly a broad expanse of lesser celandine can completely vanish.  Unfortunately, this natural plant collapse may lead some to believe that an herbicide application was highly effective.  However, the weed is not gone; it's just biding its time in the form of recharged tubers that will support ever-expanding colonies next season. 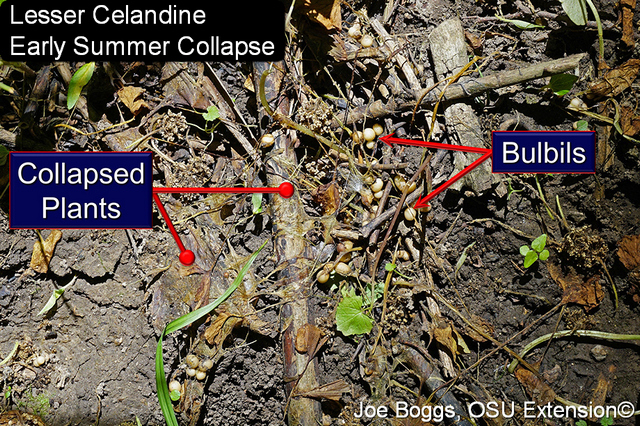 Online recommendations for eliminating small colonies include digging and destroying plants along with the tubers.  Unfortunately, this effort usually morphs into an ongoing game of whack-a-mole.  It can be very difficult to physically remove all of the tubers from the soil. 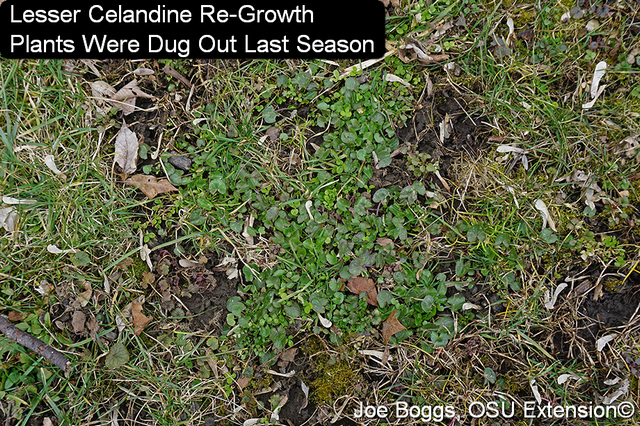 Mowing lesser celandine that has crept into turfgrass appears to have little impact on this aggressive weed.  However, many of the selective post-emergent herbicides labeled for use on turfgrass are highly effective against lesser celandine.  These include 2,4-D, MCPA, MCPP, dicamba, and triclopyr.  It is generally recommended to use products that contain at least 2 of these herbicides.   Sulfentrazone products (e.g. Dismiss) that are most often used for nutsedge control also provide good suppression of lesser celandine in turfgrass. 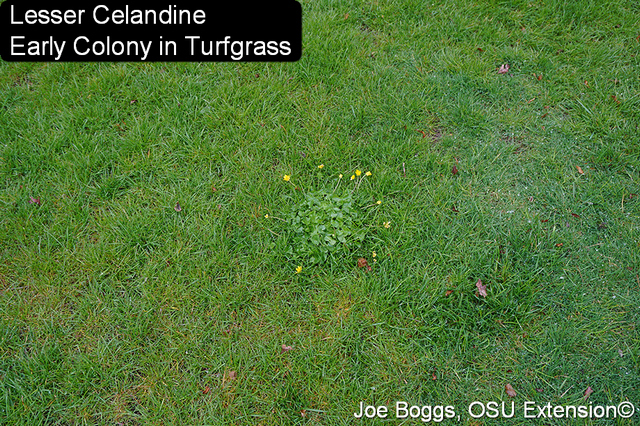 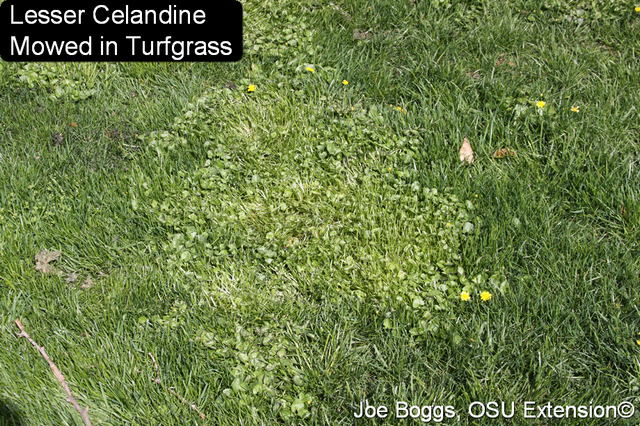 Of course, as with making any pesticide application, applicators must read and follow label directions.  This is particularly important when using turfgrass herbicides near trees and other woody ornamentals as well as herbaceous perennials and annuals. 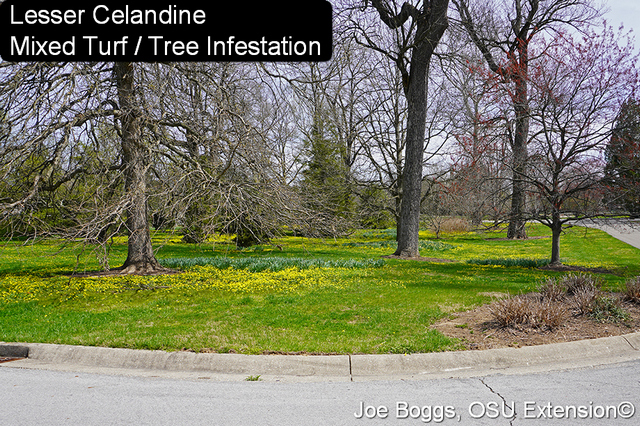 Lesser celandine can be effectively managed beneath trees in landscapes and wooded areas using the non-selective post-emergent systemic herbicide glyphosate (e.g. Roundup).  Translocation of this herbicide from leaves to tubers can disrupt carbohydrate storage. 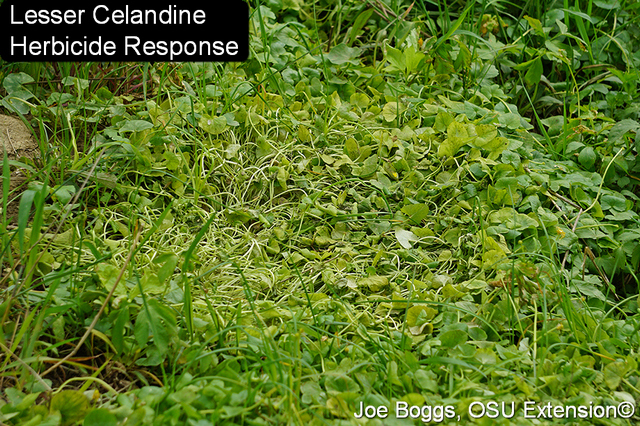 Anecdotally, landscapers have also had success with pelargonic acid (e.g. Scythe).  Although this non-residual, non-selective, post-emergent contact herbicide does not translocate, it may have a lower impact on preferred plants.  Landscapers using the highest labeled rate have had some success and combination products containing glyphosate plus pelargonic acid or glyphosate plus diquat have also been used effectively.  Multiple applications made per year, starting before the plants flowered, and continued over multiple years are required.

Management in flower beds may require delayed planting of annuals so lesser celandine plants can be targeted with a non-residual, non-selective, post-emergent herbicide.  However, eliminating lesser celandine in annual bulb beds is problematic and may require soil removal and replacement. 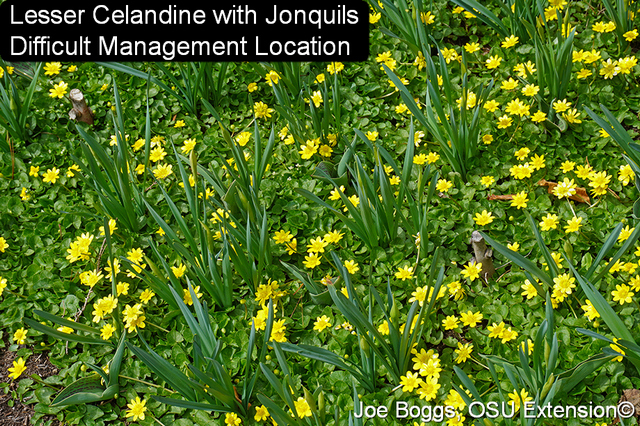