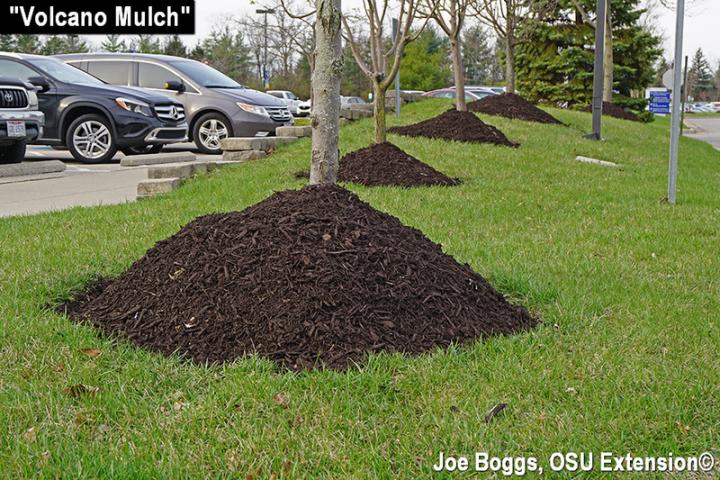 The vast majority of the trees and shrubs used in Ohio landscapes evolved in ecosystems with soils topped by an organic layer. Think forest and grassland soils. 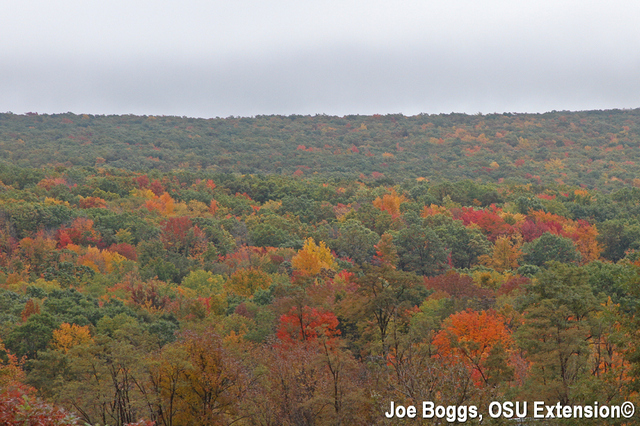 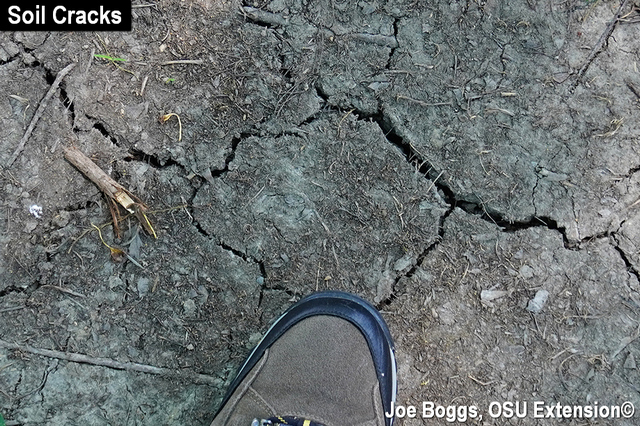 Organic mulches such as aged hardwood bark mulch not only enhance landscape aesthetics but serve as a stand-in for leaf litter found beneath trees in forests.  A layer of organic mulch moderates soil temperature, preserves soil moisture, suppresses weeds, and as the mulch slowly decays, it contributes organic content to the underlying soil.  Arguably, organic mulch may be the single most important component in a healthy Ohio landscape ecosystem. 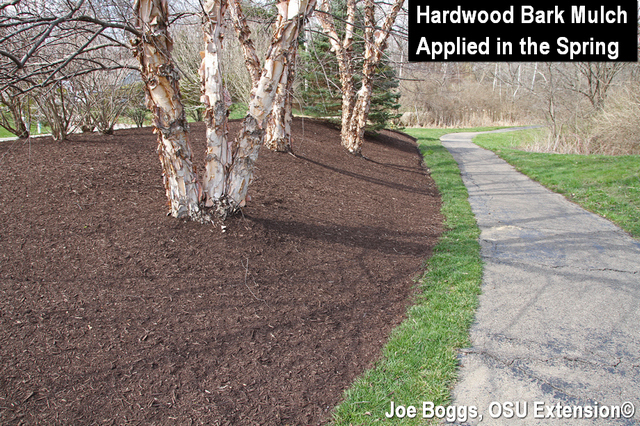 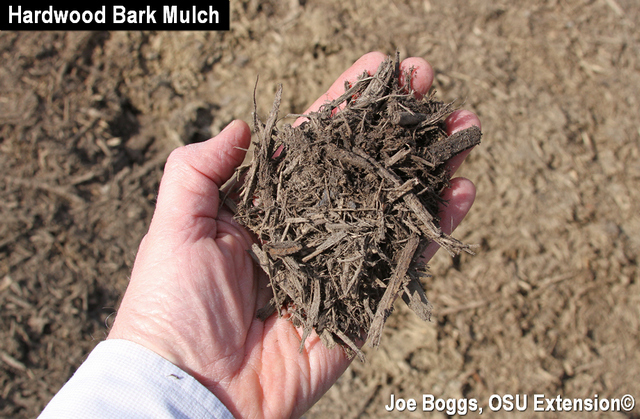 Wood chips are technically considered “organic mulch;” however, they should not be used beneath trees and shrubs.  The high carbon content of the raw wood means soil microorganisms must draw nitrogen from the soil at the expense of plants to fully utilize the bountiful source of carbon.  Consequently, raw wood chips can cause nitrogen deficiency in plants.  Wood chips and fresh hardwood bark should be composted for a time to reduce the carbon content. 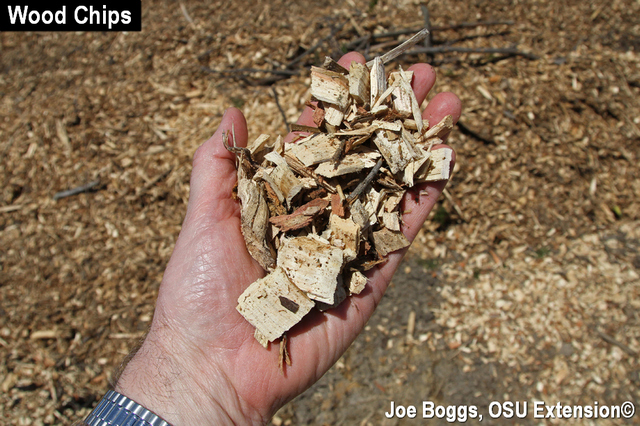 The proper application of organic mulch such as hardwood mulch starts with producing mulch rings as large as is practical.  The mulch should be applied to a depth of no more than 2 - 3 inches.  Mulch that finds its way onto tree trunks should be pulled away from the trunk flare. 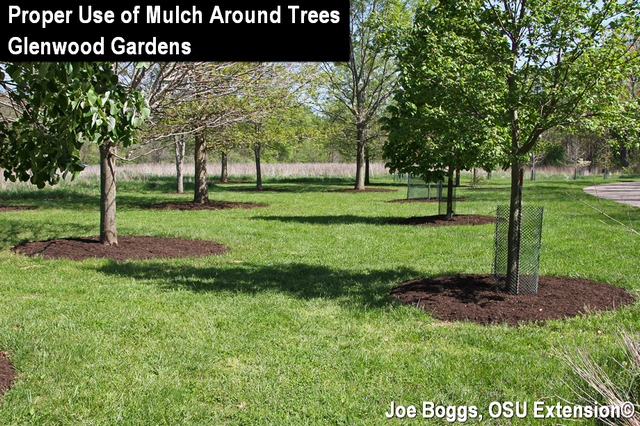 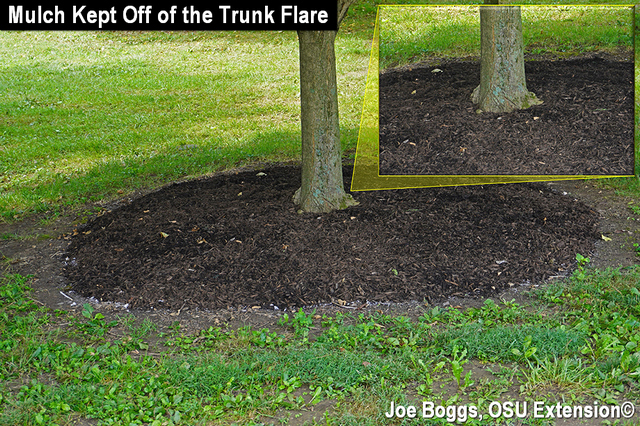 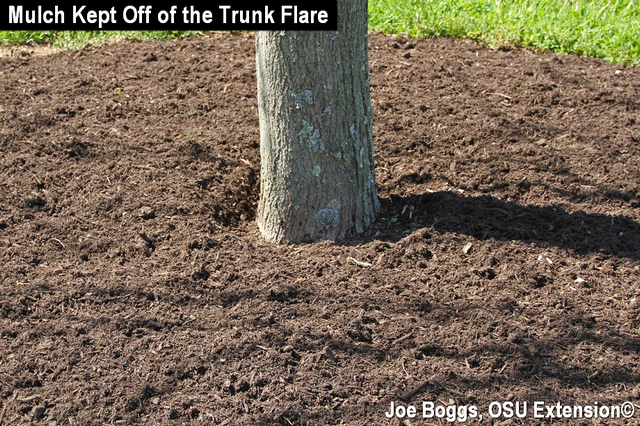 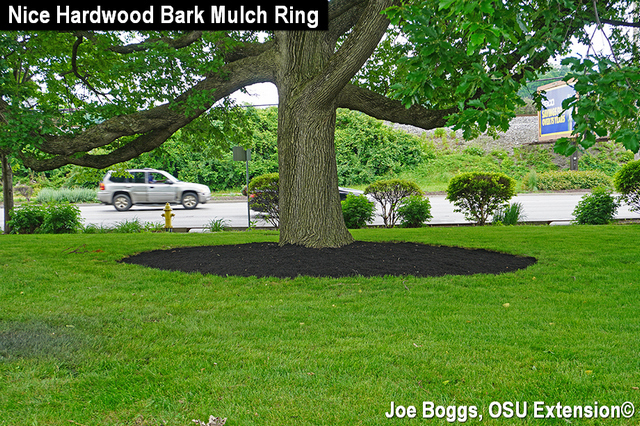 If a Little is Good, More is Not Better

Mulch piled high around trees and shrubs has been called many names; some not suitable for use in BYGL Alerts.  Descriptive names include pyramid mulch, mountain mulch, mulch mounds, and my personal favorite volcano mulch, or mulch volcanoes, for the stratovolcano-like creations. 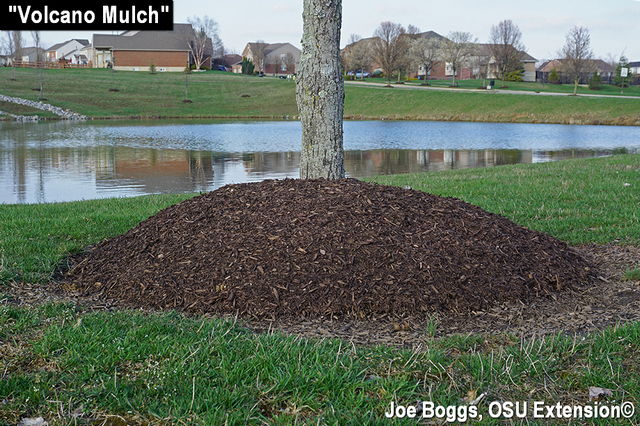 These mulch monstrosities have been a source of continual frustration for anyone who cares about trees.  Yet, despite years of educational efforts, mulch volcanoes continue to erupt in Ohio landscapes. 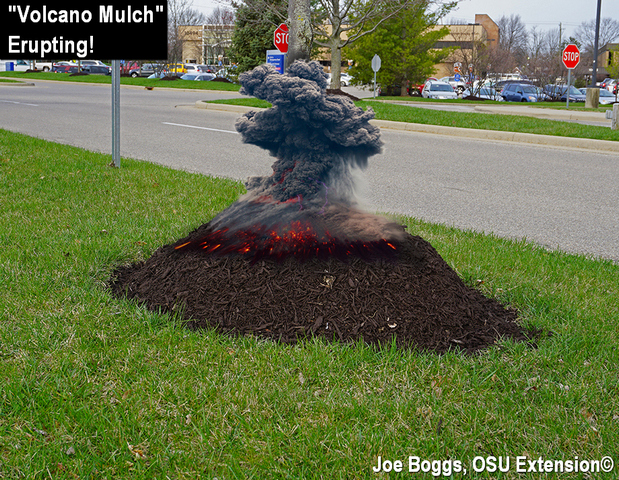 Digging out turfgrass to add definition to a mulch ring is common and can enhance aesthetics if done with extreme care to avoid damaging tree and shrub roots.  Unfortunately, overly enthusiastic excavations to produce “tree moats” often cause root damage and may even involve a concerted effort to sever roots growing beyond the excavation zone. 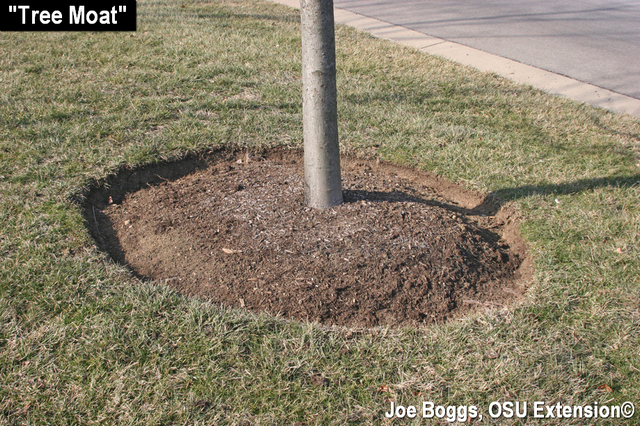 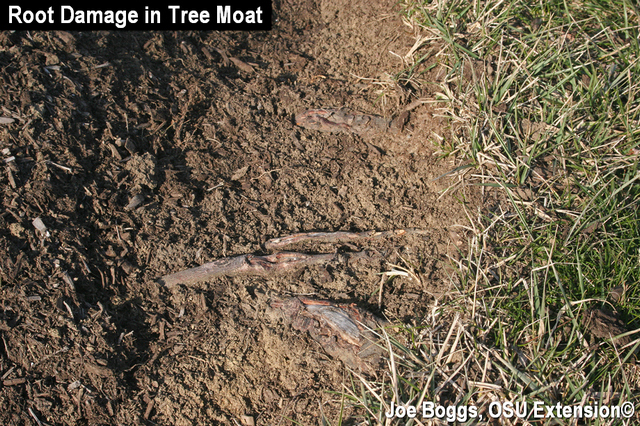 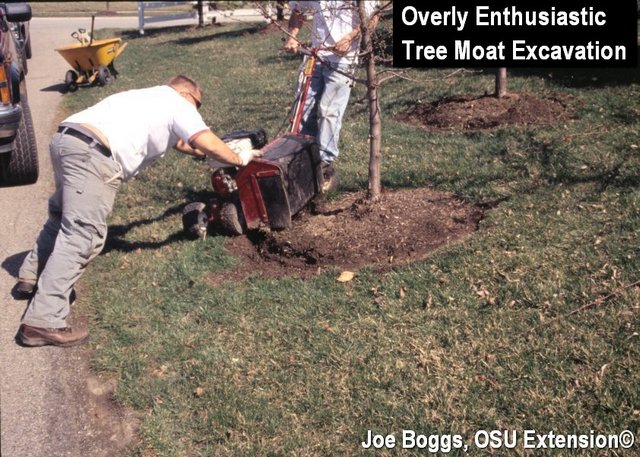 The Woes of Mulch Madness

Tree moats and mulch volcanoes:  why do these horticultural horrors appeal to people?  Creating both costs extra money.  Mulch volcanoes waste product and it takes time to excavate a castle-worthy moat around a tree.

Both can cause slow tree and shrub death.  However, the impacts are insidious and perhaps that’s the problem.  If trees died right away, people would stop the mulch madness. 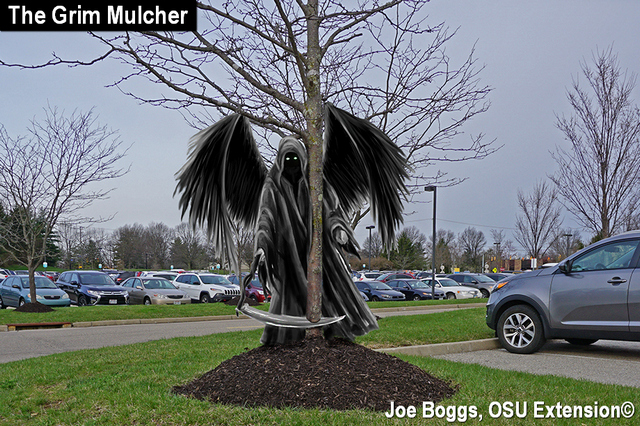 1. Bark Damage:  Tree bark is dead, dry tissue that protects trees from a wide range of challenges such as dehydration, oxidation, and direct access to the living tissue beneath by plant pests and pathogens. Mulch piled against tree trunks can retain water elevating the moisture content of the bark making it susceptible to decay. 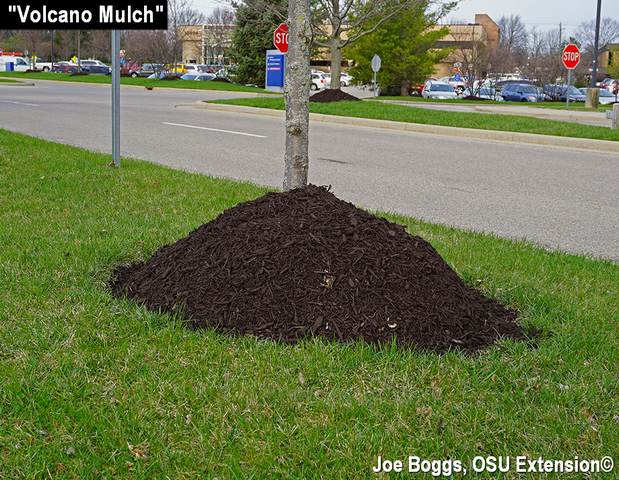 2. Damaging or Cutting Tree Roots:  Studies have revealed that the majority of a tree’s root system grows well outside of the dripline.  Overly enthusiastic excavations around mulch rings that morph into deep tree moats may cause injury to the roots making them more susceptible to infections from root-destroying plant pathogens.  Completely severing the roots creates a concentrated root mass within the mulch ring where resources such as water and nutrients may be more quickly depleted. 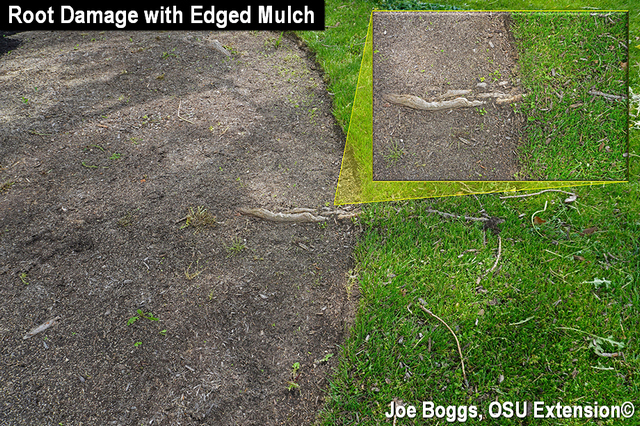 3. Secondary Root Systems:  Tree root cells acquire oxygen directly from the soil rather than from an internal source; plants don’t have a cardiovascular system!  Numerous studies have revealed that most of a deciduous tree’s feeder roots are found in the upper soil strata where the concentration of oxygen is highest.

Although bark mulch may at first appear light and airy, it will ultimately compact as it degrades to interfere with oxygen reaching tree root cells.  Trees respond by growing a secondary root system into the mulch; it's the same response seen with trees planted too deep in the soil. 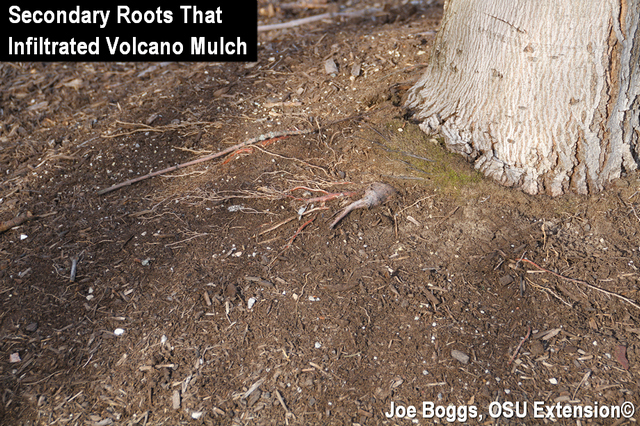 4. Root Dehydration:  As the organic mulch degrades, the secondary roots growing into the mulch can become exposed.  The decomposing mulch can also become hydrophobic if allowed to dry out; it repels water.  You can observe the hydrophobicity of dry organic matter when you try to moisten a bag of dry peat moss.  Of course, water repellency ultimately causes infiltrating roots to dehydrate. 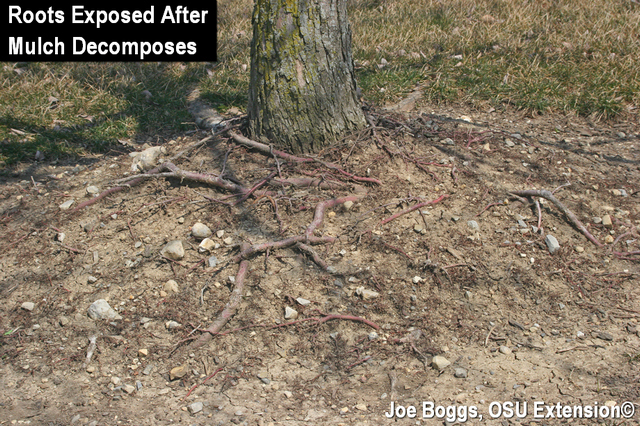 5. Stem Girdling Roots:  Secondary roots growing into mulch piled high on the trunk will eventually encounter the slopes of mulch volcanoes causing the roots to turn.  Although root cells require an external oxygen source, they can't grow into thin air!  Eventually, these roots encircle the tree trunk and merge with the stem tissue.  As these errant roots increase girth, they gradually girdle the trunk and restrict vascular flow.  Thus, they are known as "stem girdling roots." 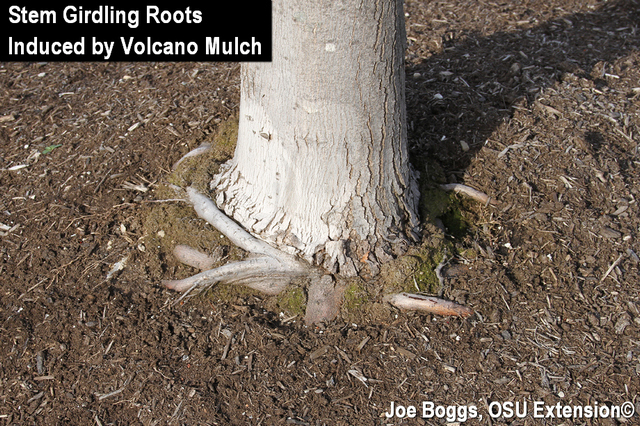 Symptoms of stem girdling roots include flat sides directly above the compression zone.  This is a non-reversible condition and can eventually lead to a loss in structural integrity provided by the cylinder-within-cylinder morphological structure of tree stems.  In other words, trees break and fall over.  Stem girdling roots can also lead to bark splitting as the choked-off phloem dies.  Ultimately, the disruption in vascular flow produces a thinning canopy. 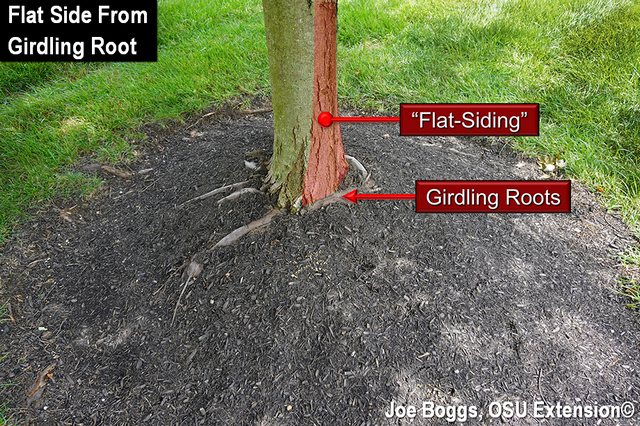 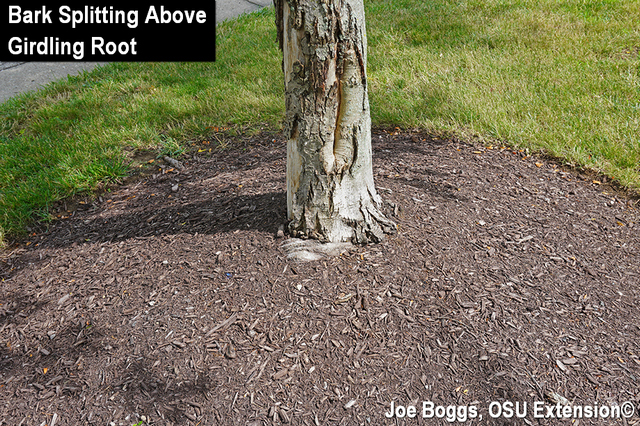 6. The Coup de Grâce; Say Hello to My Little Friends:  While moisture starvation and vascular strangulation can ultimately kill a tree, along the way they produce tree stress.  This can induce trees to drop their defenses against infestations by opportunistic insect pests such as native borers or infections by plant pathogens.  Of course, the pests and diseases get blamed if a tree succumbs, not the volcano mulch that set the tree's demise into motion in the first place. 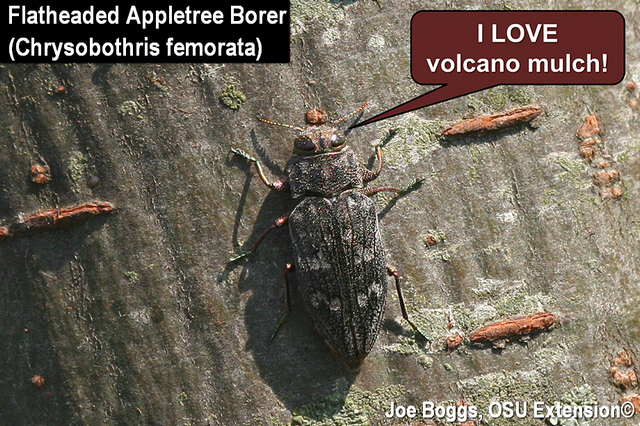 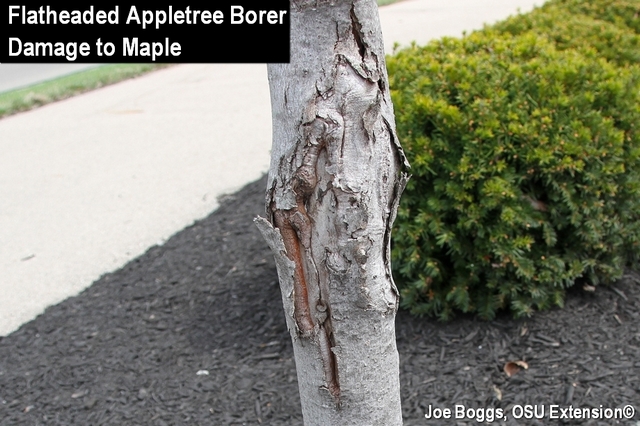