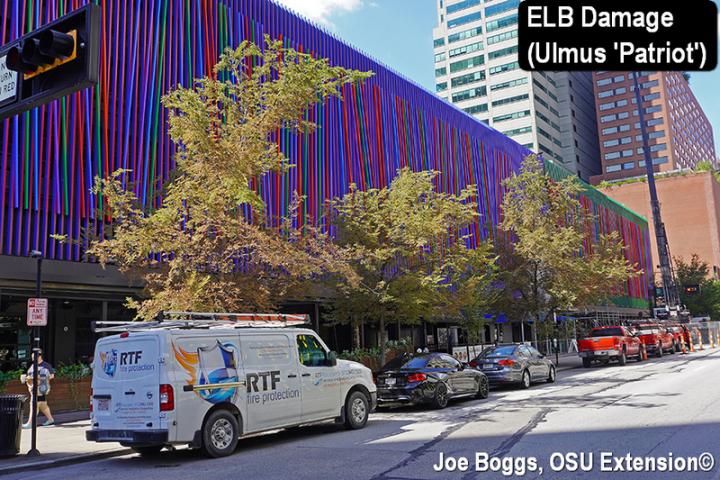 A site visit last week revealed a heavy infestation of Elm Leaf Beetle (ELB) (Xanthogaleruca luteola) on Ulmus ‘Patriot’ street trees in downtown Cincinnati.  It was a surprise.  This non-native beetle was once considered a major urban forest pest in Ohio as well as across most of the U.S. and eastern Canada.  However, for unknown reasons, the beetles seemed to vanish from much of the U.S. in the early 1990s. 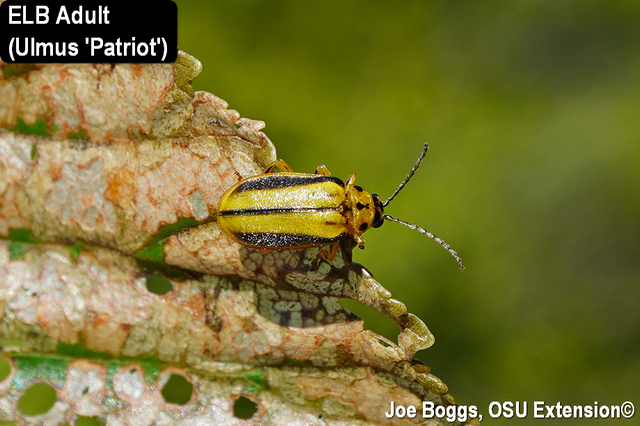 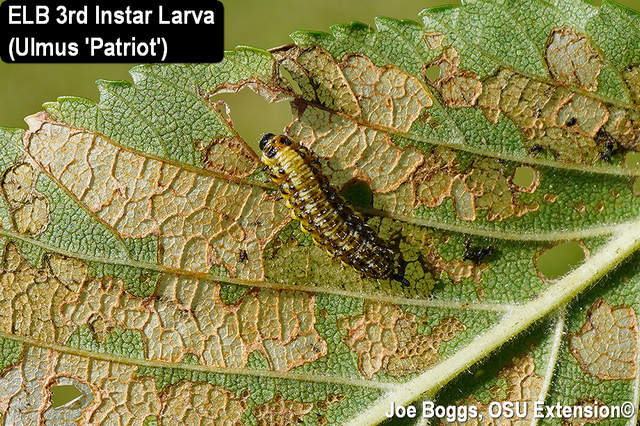 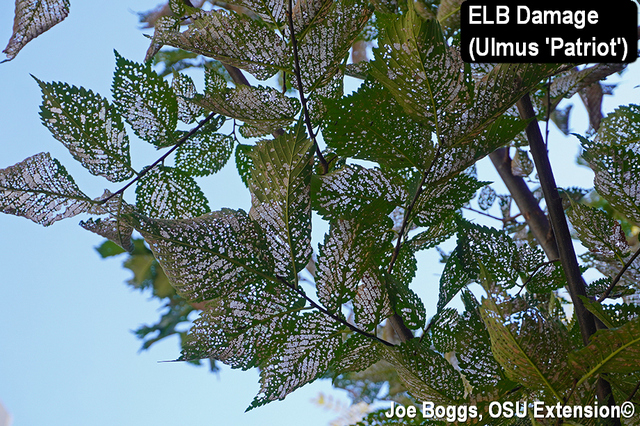 The one exception to the mass disappearance of ELB was in Colorado.  Whitney Cranshaw (Professor Emeritus, Entomology, Colorado State University) recently reported in an e-mail message to the listserv “ornaent” that although ELB disappeared from much of Colorado, a small population has remained in the southeast part of the state.  He also noted that after a 25-year hiatus in Colorado, over the past 3 years they have been observing a gradual rise in the occurrence of ELB in areas of the Northern Front Range from Denver to Fort Collins.

ELB is a European native with a long history in the U.S.  Townend Glover was the first to hold the federal position of “United States Entomologist” with the U.S. Department of Agriculture (USDA).  Glover provided the following information on ELB in his “Report of the Entomologist and Curator of the Museum” in the “Report of the Commissioner of Agriculture for the year 1870.”

“This insect, imported from Europe as early as the summer of 1837, destroyed the foliage of elms in Sevres, France, and in Germany, in 1839, trees were very much injured.  I have observed that the American elm is not so much injured by these insects in Washington as the European species.”

ELB adults emerge in the spring from protected overwintering sites and move to elm trees to feed, mate, and lay eggs.  They feed by chewing rough-edged holes in the leaves which produces what has been described as a “shot-hole” effect. 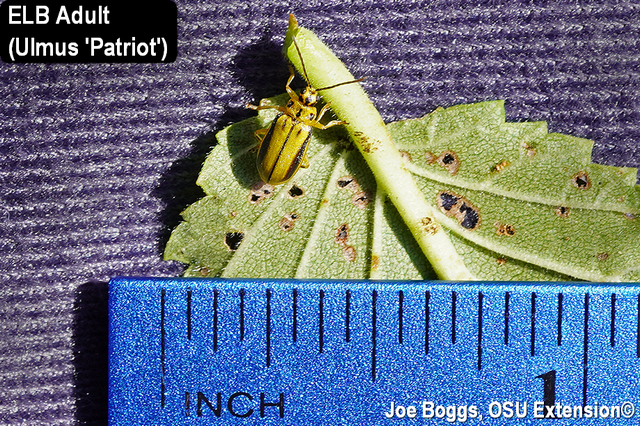 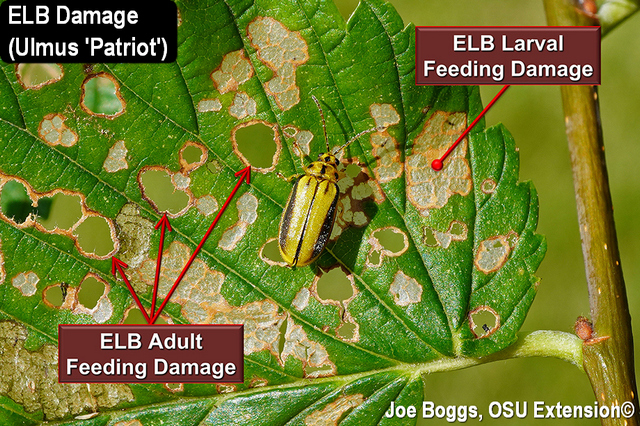 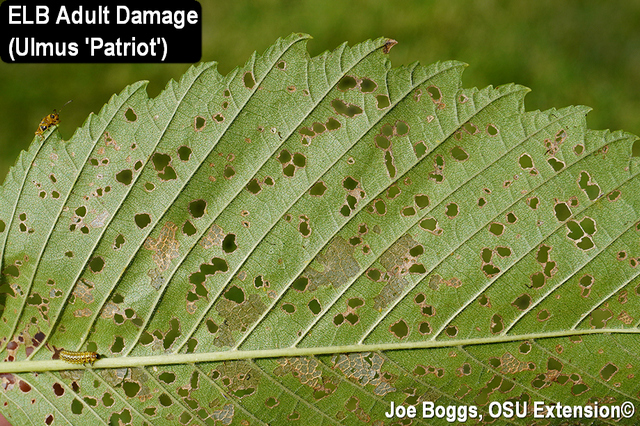 Females lay cream-colored eggs that are pointed and somewhat pear-shaped.  They may be mistaken for lady beetle eggs.  ELB egg masses of 5 – 25 eggs are attached to the undersides of leaves.  Females each produce 400 – 800 eggs during their lifetime; thus, populations can build rapidly. 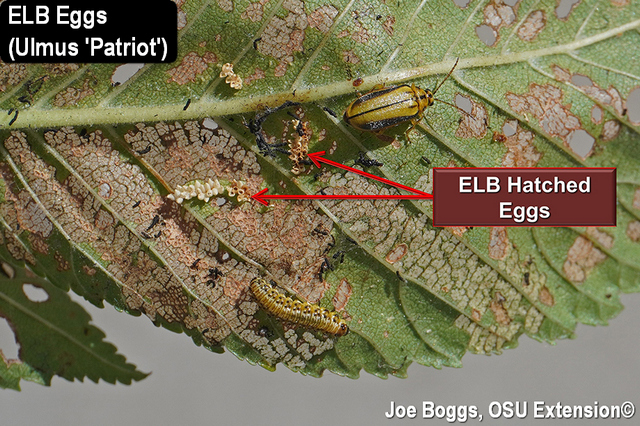 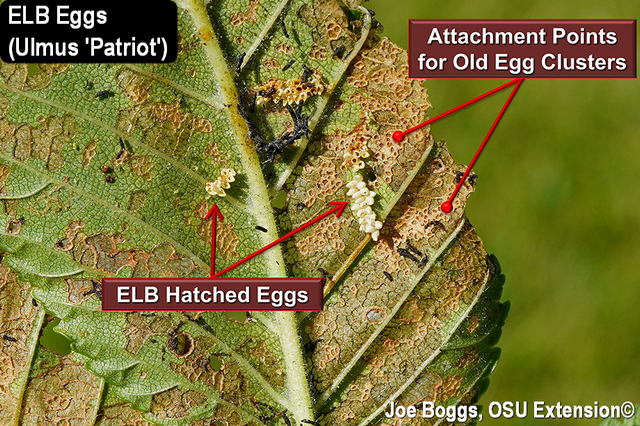 ELB larvae produce the most conspicuous and significant damage. They feed on the underside of the leaves and consume all leaf tissue except for the veins and upper leaf epidermis which at first produces a “windowpane” effect.  The damage eventually dries out and turns brown causing the leaves to appear scorched. 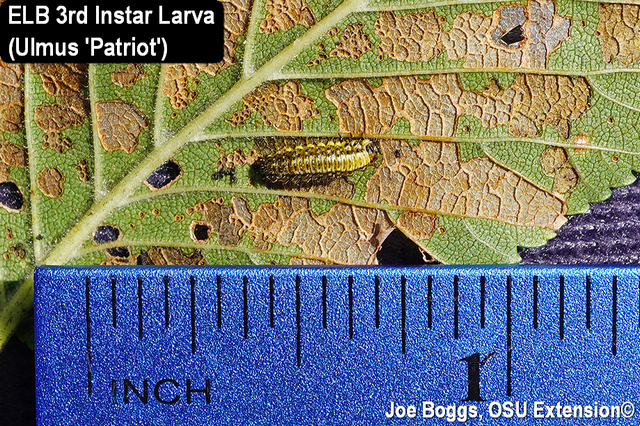 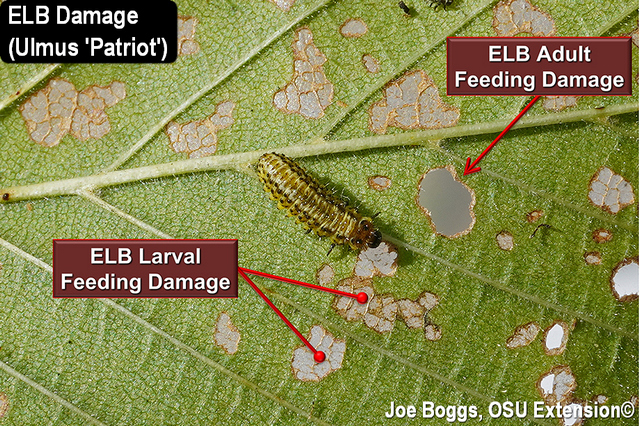 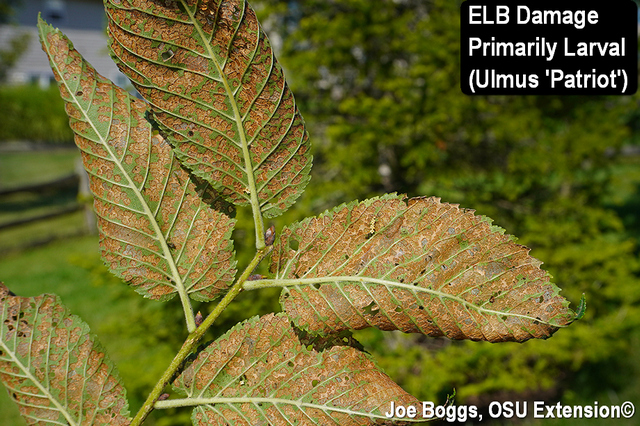 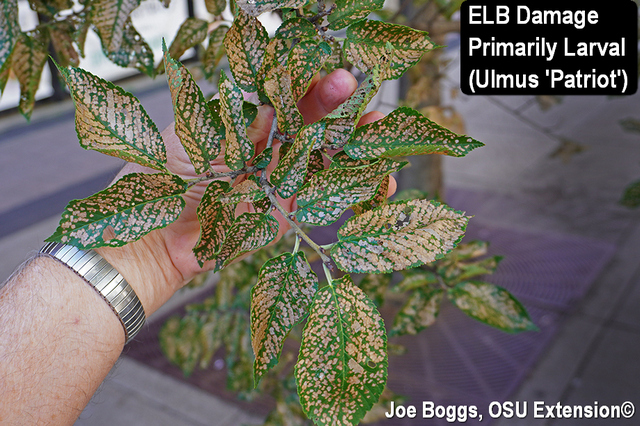 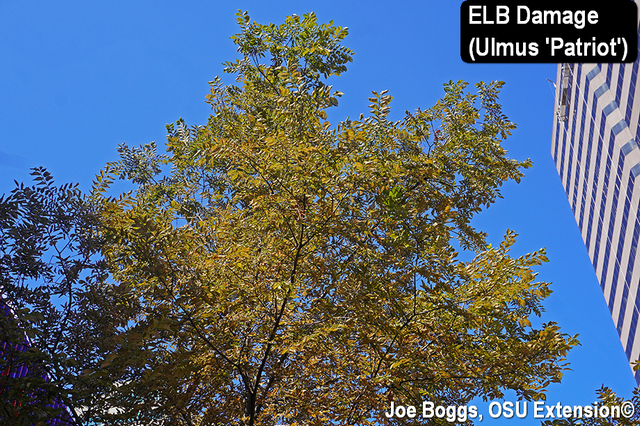 The larvae develop through three instar stages.  The final instar stage is sometimes called the “wondering stage” because the larvae crawl from the leaves in search of protected sites to pupate.  Occasionally, they pupate in bark crevices but more commonly they crawl down the trunk to pupate at the base of their host tree.  Indeed, large collections of late instar larvae congregating at the base of trees produced some creative management strategies including the construction of elaborate “traps.” 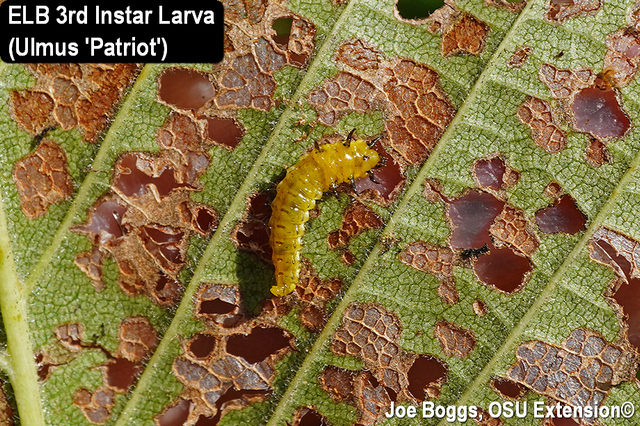 The ELB adults destined to overwinter are dark green.  They enter a semi-dormant state called diapause once they find a suitable overwintering site.  These are the adults that emerge in the spring to start the first generation.

The so-called Elm Flea Weevil (Orchestes steppensis) has been on the rise in recent years in Ohio targeting native, non-native, and hybrid elms.  Feeding by the adult weevils produces small holes which may superficially resemble ELB adult leaf-feeding damage. 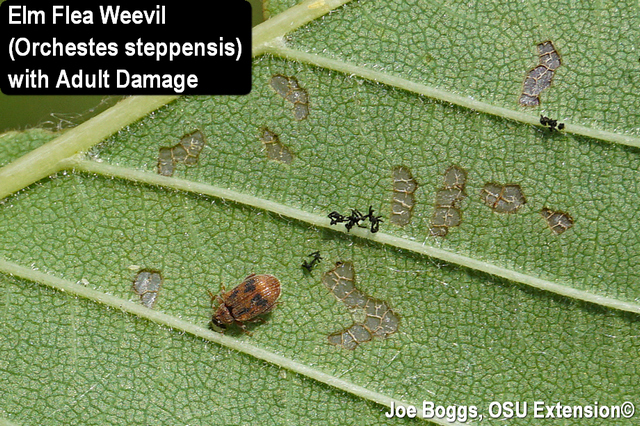 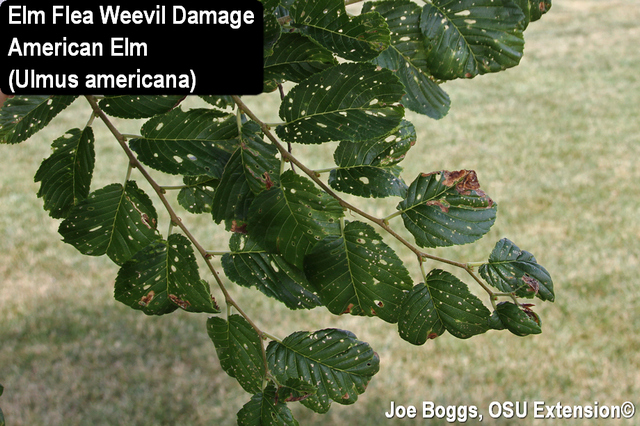 However, a close examination of the leaves will reveal a key feature separating the symptomology between the two beetles.  The elm flea weevil larvae feed as leafminers.  Their blotch-like leafmines turn dark brown and remain evident for some time after the larvae complete their development.  The necrotic tissue eventually drops from the leaves producing large holes. 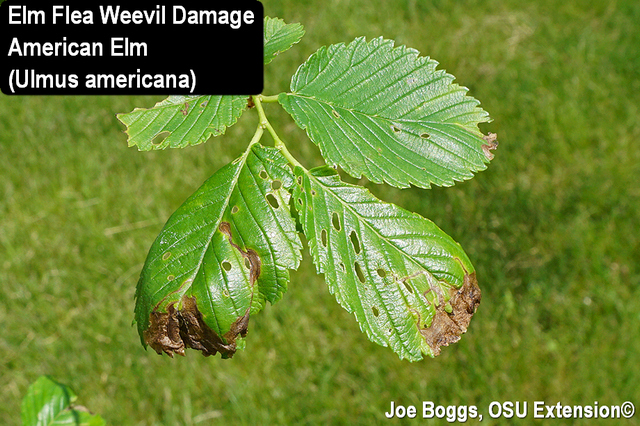 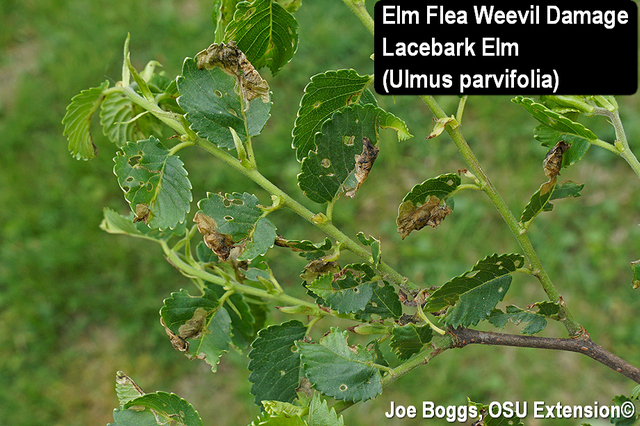 Another key difference is that the flea weevils commonly infest American (U. americana) and lacebark or Chinese (U. parvifolia) elms.  American elms are poor hosts for ELB, and lacebark elms were shown in multiple studies to be one of the least suitable ELB hosts.

The elm flea weevil was covered in an earlier BYGL Alert titled; “Elms with Holey Leaves” posted on June 21, 2021.  You can access the Alert by clicking on this hotlink:

Hosts with the Most

Host suitability studies, as well as observational reports from the 1980s, showed that American elm (U. americana) is not a particularly good host for ELB.  However, the studies showed that some European elms are very good hosts.  These include European Field Elm (U. carpinifolia) and Wych or Scotch Elm (U. glabra).

This seems counter-intuitive.  One would think the opposite; that the European elms would have evolved more robust defenses against a European native pest that can cause major damage compared to American elms that didn’t co-evolve with ELB. 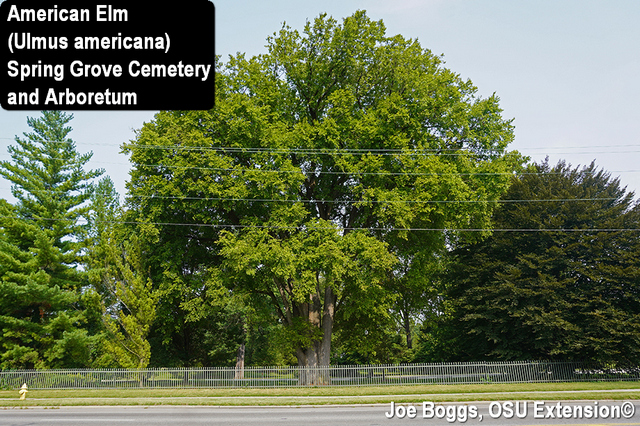 The same dichotomy in host suitability was also observed with elms of Asian origin.  As noted above, lacebark or Chinese elm (U. parvifolia) was the least suitable of all of the elms in the studies.  Zelkova or Japanese Zelkova (Zelkova serrata) may host ELB, but its suitability is about equal to lacebark elm.

Wilson Elm (U. wilsoniana) which is a native of western China was only moderately suitable. However, Siberian Elm (U. pumila) and Manchurian or Cut-Leaf Elm (U. laciniata) were highly suitable hosts.  Indeed, Siberian elm served as a “go-to” source for beetles used in research studies conducted by Ohio State in the 1980s.

The literature regarding the suitability of hybrid elms as hosts to ELB is sometimes perplexing.  For example, ‘Patriot’, the hybrid currently being hammered by ELB in Cincinnati was reported to be less susceptible compared to many other hybrids although its parentage includes ‘Urban’ elm which has in its lineage the good ELB hosts U. carpinifolia and U. pumila. 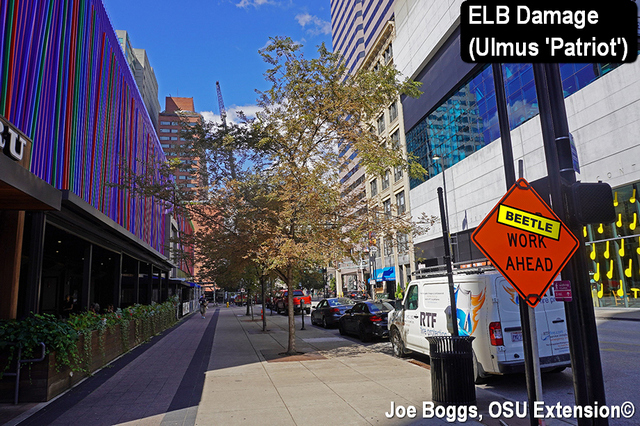 Regardless, the disappearance of ELB from Ohio, as well as from much of the U.S., curtailed host suitability studies after the early 2000s.  Consequently, many of the newer elm varieties, cultivars, and hybrids that were selected based on Dutch elm disease resistance have not been tested against ELB.  Perhaps that will change if this old pest is indeed reemerging.

Glover, T. 1867. Report of the entomologist, pp. 58- 76. In Report of the Commissioner of Agriculture. Government Printing Office, Washington, D.C