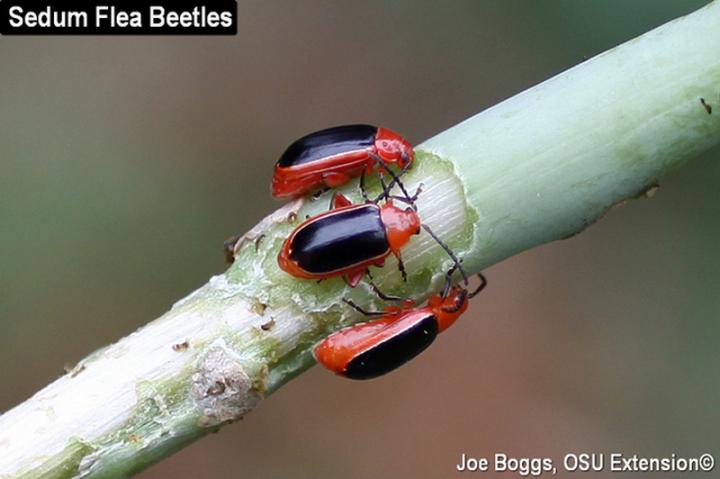 I first encountered these brightly colored flea beetles in an eastern Cincinnati landscape in mid-October 2011.  The beetles were doing so much damage the only way I could identify the defoliated plants was through a plant tag; it was Hylotelephium telephium ‘Autumn Joy’ (family Crassulaceae).  There was little joy in the appearance of the landscape planting. 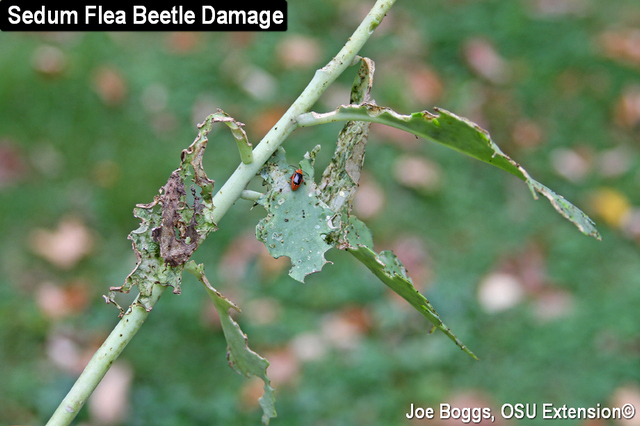 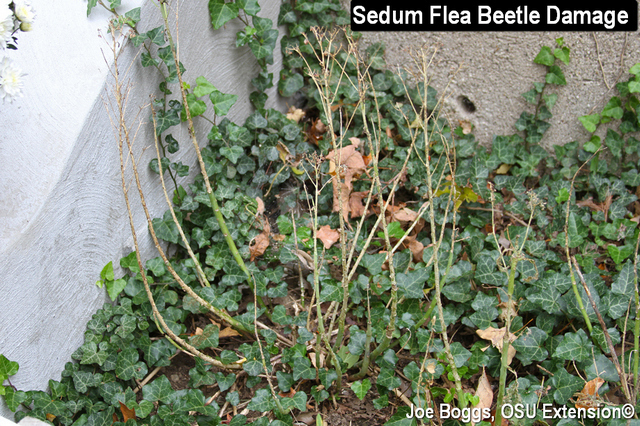 Since that time, I’ve observed and photographed the beetles and larvae in Dayton and elsewhere in Greater Cincinnati in 2018, 2019, and two weeks ago.  ‘Autumn Joy’ has been a consistent host, but I’ve also found them on ‘Munstead Red’. 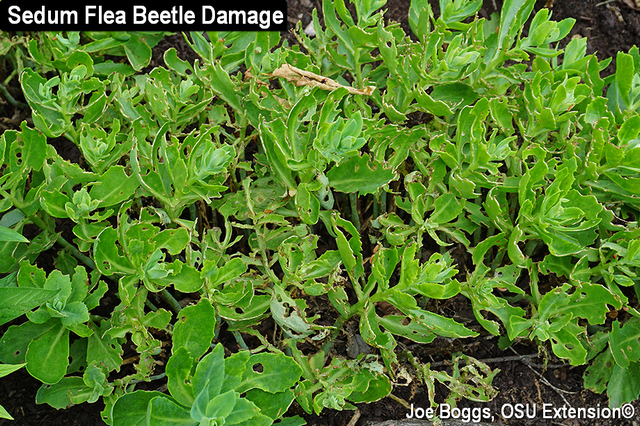 Flea beetles are so named because they use their powerful hind legs to jump like a flea.  These beetles have excellent eyesight and are quick to demonstrate their exceptional leaping ability.  They are difficult to spot and even more difficult to photograph! 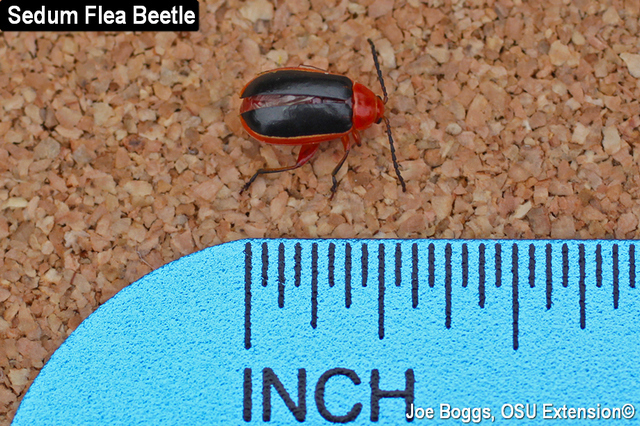 Both the adults and larvae produce similar feeding damage.  They tend to chew the upper leaf surface to produce deep furrows.  Eventually, they chew through the leaves to produce holes.  The larvae will also feed along the leaf edges to produce notching while the adults readily move onto the stems removing the outer-most tissue. 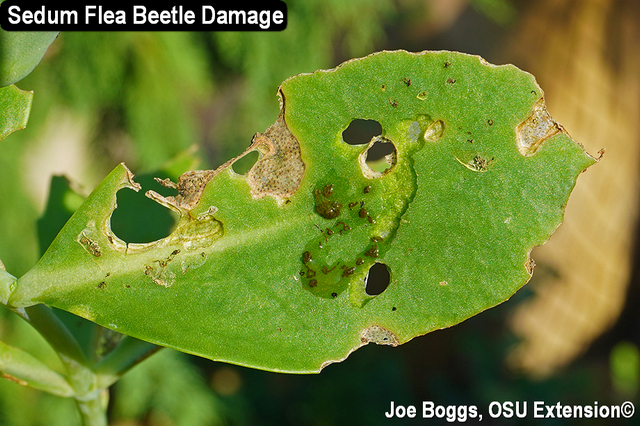 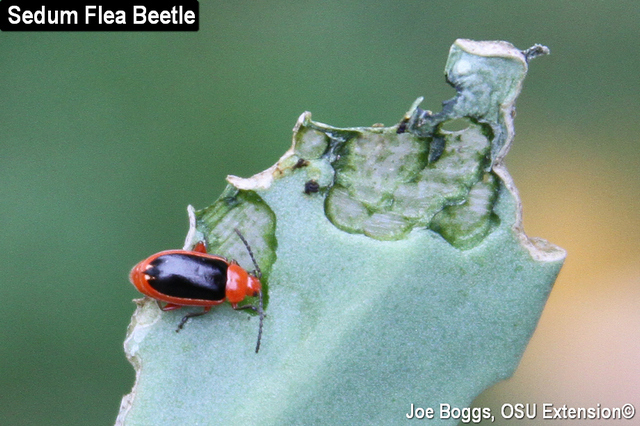 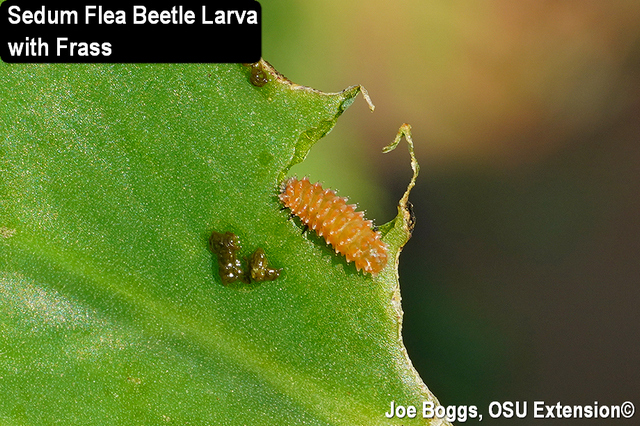 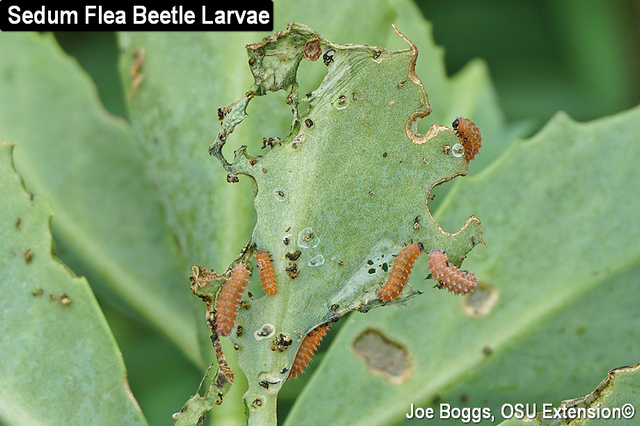 Reports from homeowners and my own observations have occurred from early June through mid-October.  This suggests the beetles have at least two generations per season, if not more.  Thus, the damage my increase with each succeeding generation.

The adult beetles and larvae I observed two weeks ago were feeding on a dense planting of ‘Autumn Joy’.  However, the damage was confined to the lower leaves; it was only revealed by pushing the plants aside to reveal the lower portion of the plants.  The overall aesthetics of the planting was not affected.  I will be monitoring the infestation to see if that damage / feeding pattern changes. 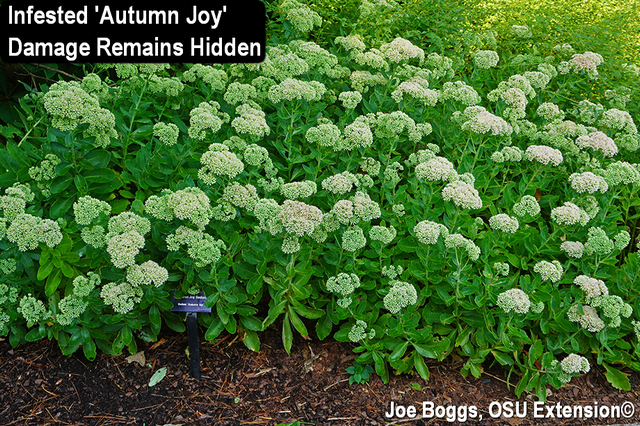 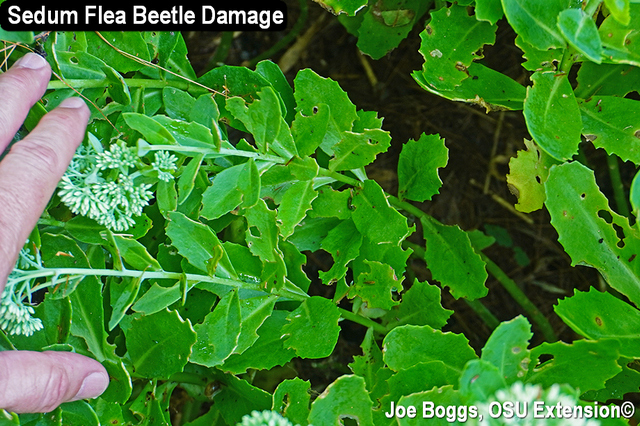 On a side note, the ‘Autumn Joy’ also had a few snails gliding across the leaf surfaces.  Snails and slugs are notorious for using their rasping tongues to scrape away leaf tissue creating irregular holes.  However, I believe the snails were a diagnostic red herring with the vast majority of the damage being done by the beetle adults and larvae. 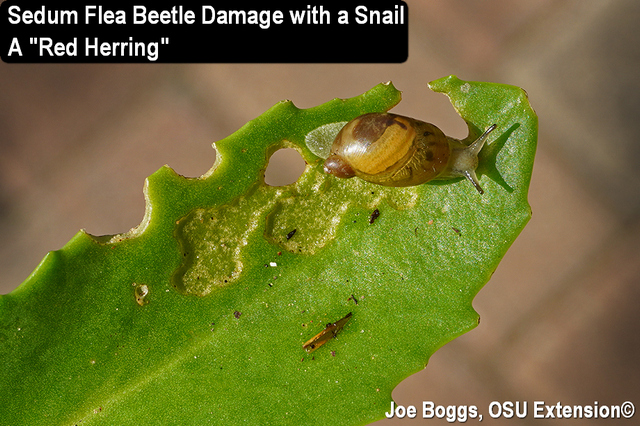 I’ve been unable to find a flea beetle listed among pests of “sedum” or other stonecrops.  However, the flea beetle looks very similar to the Passionflower Flea Beetle (Disonycha discoidea, family Chrysomelidae).  You can see pictures of this beetle posted on “BugGuide” by clicking on this hotlink: 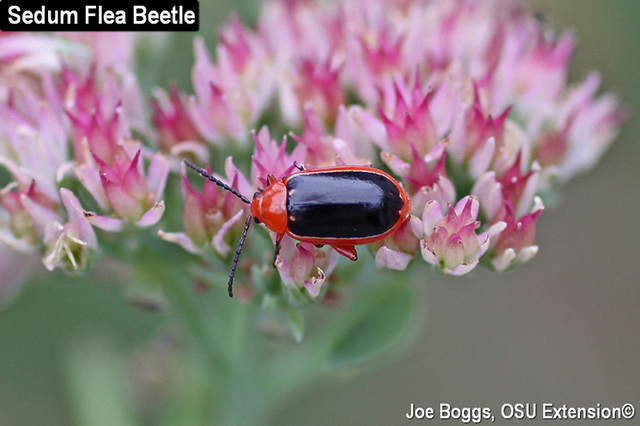 The authors of Host Plants of Leaf Beetle Species Occurring in the United States and Canada (see “Literature Cited”) note that the passionflower flea beetle only feeds on passionflowers including Passiflora incarnata and P. lutea.  In fact, neither Sedum nor Hylotelephium are listed as hosts for this or any of the other 30 flea beetle species in the Disonycha genus.

In the meantime, given the consistent appearance of these beetles on “sedum,” I’ve tagged the beetles the “Sedum Flea Beetle.”  Of course, purists will recognize that I'm bending taxonomic rules by ignoring the fact that the genus Sedum no longer applies to many stonecrop plants used in landscapes.  Of course, whether the plants belong to the Sedum or Hylotelephium genera, most people still call them sedum.