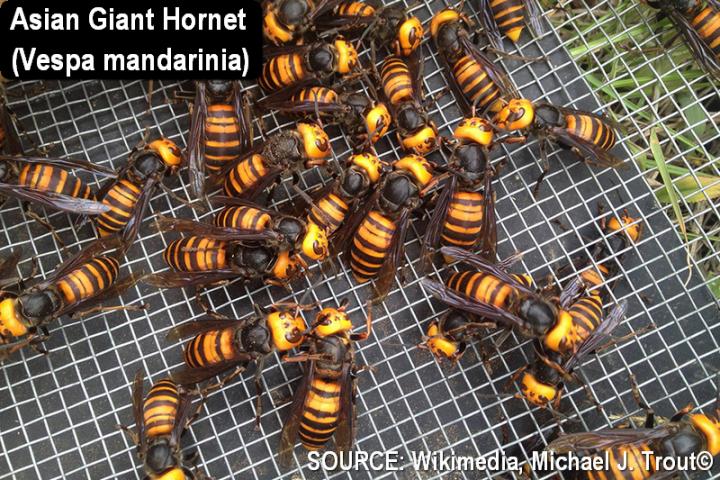 On September 18, 2019, an Asian Giant Hornet (AGH) (Vespa mandarinia) nest was found and destroyed in the town of Nanaimo on Vancouver Island, British Columbia. It was the first nest as well as the first confirmed report of AGH being found in North America.

In December 2019, the Washington State Department of Agriculture (WSDA) confirmed that a dead hornet collected by a resident in Blaine, WA, was AGH.  Blaine is on the U.S. – Canadian border almost directly across the Strait of Georgia from Nanaimo, B.C.  It was the first confirmation of an AGH adult being found in the U.S. 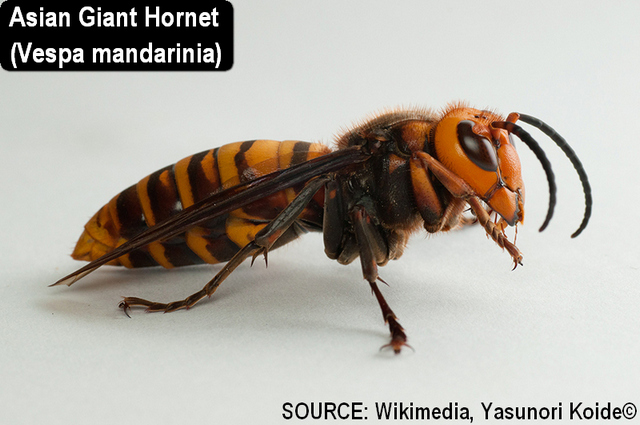 Last October, an AGH was found on private property in Blaine, WA, just south of British Columbia's Peace Arch border crossing.  It was the first AGH nest found in the U.S.  That nest was destroyed by the WSDA on October 24, 2020.  You can read about the eradication by clicking this hotlink to a BYGL Alert titled, "Destroyed: the First Asian Giant Hornet Nest in the U.S.": 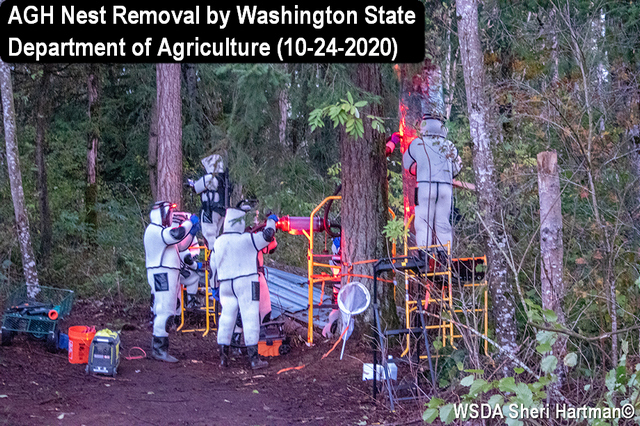 On August 19, 2021, WSDA announced during an AGH webinar that the second AGH nest discovered in the U.S. was found in the base of a dead alder tree in a rural area in Whatcom County just east of Blaine, WA.  The site was about one-quarter mile from the Canadian border.  Last week, the WSDA announced that the nest had been destroyed. 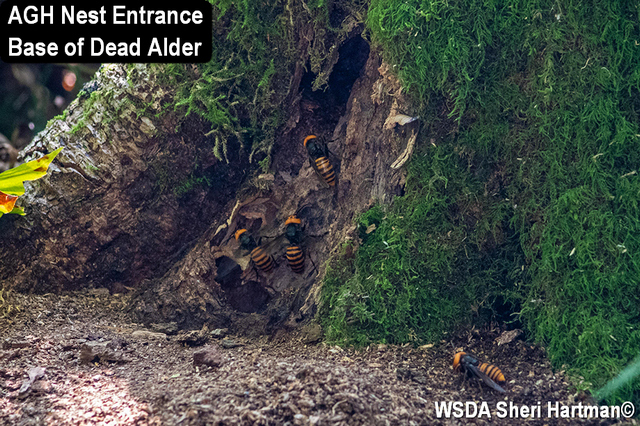 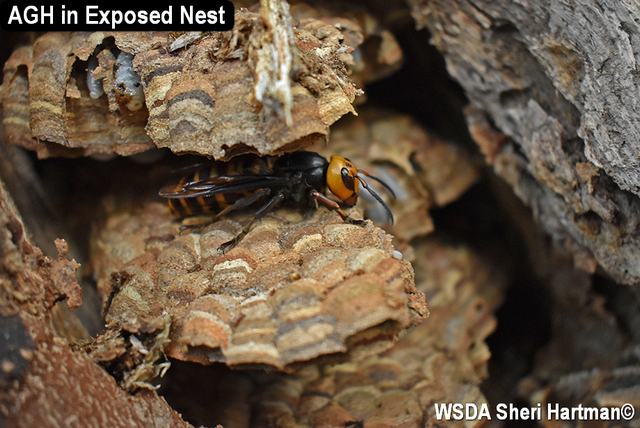 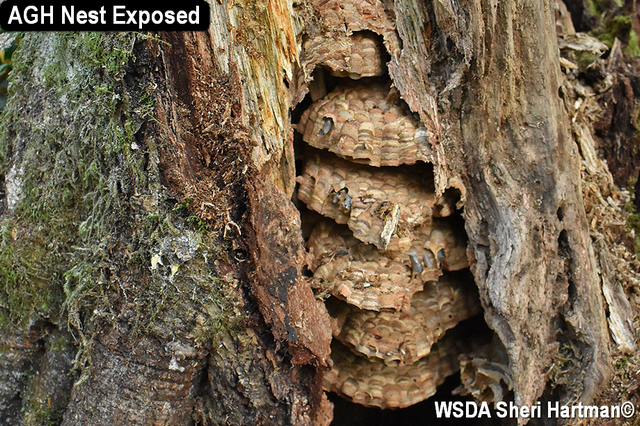 The second nest was found around two miles from the nest that WSDA eradicated last October.  It was suspected that some new queens may have dispersed from the 2020 nest before it was destroyed.  However, it will not be known if the two nests are connected until DNA testing of the specimens is completed. 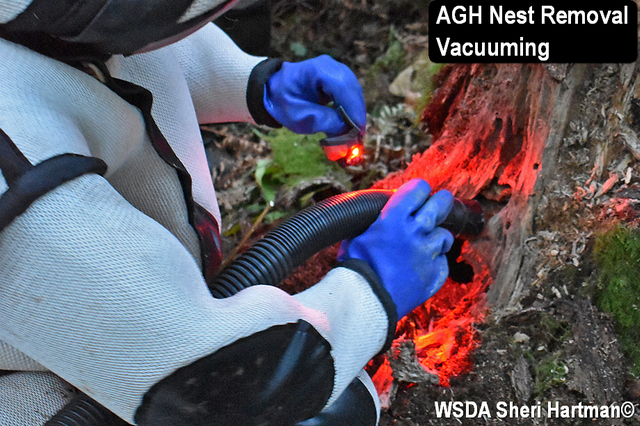 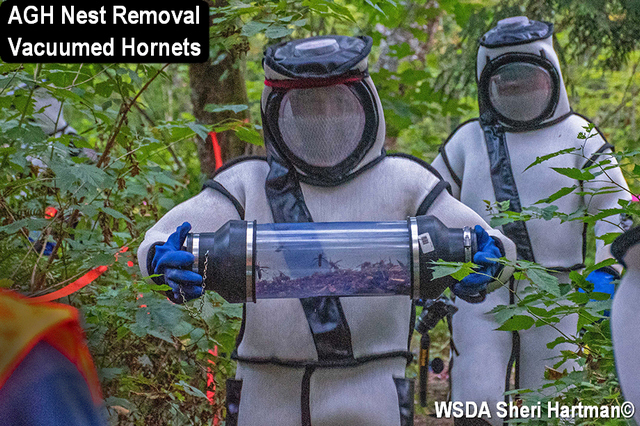 All detections in the U.S. continue to be confined to the extreme northwest corner of the state of Washington.  Thus far, AGH has not been confirmed in Ohio or anywhere else in North America.

However, AGH did not fly from Asia to southwestern Canada or northwest Washington State.  As other non-native insect pests have taught us, we must remain vigilant.

Beekeepers should be particularly vigilant because this so-called "murder hornet" is murderous on European honey bees (Apis mellifera).  AGH will mass-attack honey bee hives and quickly dispatch the workers primarily by clipping off their heads.  They then rip out the honey bee larvae and pupae, fly back to their nests and feed the mellifera meat morsels to their young.  Hives can be raided and destroyed in a single afternoon. 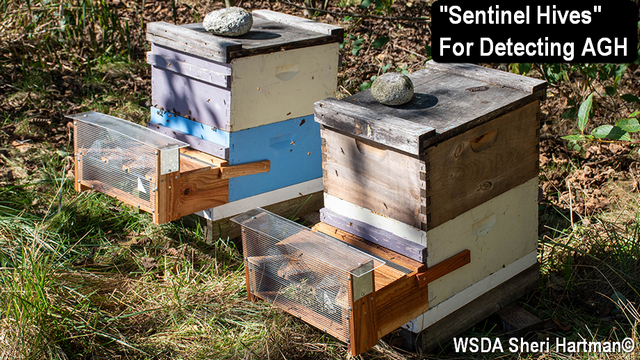 The hornet’s strong preference for honey bees means beehives are highly effective in revealing undetected AGH populations.  For this reason, beekeepers are most likely to be the first to observe AGH in an area where this non-native has established a new outpost.  Beekeepers who discover hives that have been suddenly wiped out for no apparent reason should contact our Ohio Department of Agriculture (ODA).

What You Can Do:

Our ODA created an online Ohio Asian Giant Hornet Reporting Tool last year so Ohioans can provide photographs and locations of suspicious insects.  Thus far, Ohio is the only state outside of Washington State that has created such an online reporting tool.  ODA and OSU entomologists work together to make the identifications.

1. Take Pictures.  If you suspect that you have found AGH in Ohio, take pictures!    The adage “a picture is worth a thousand words” applies.  And don’t hesitate.  You should report any suspicious-looking insect.

2. Send the Pictures.  Ohioans can provide photographs and locations of suspicious insects.  Here is the link to the ODA Asian Giant Hornet Online Portal: