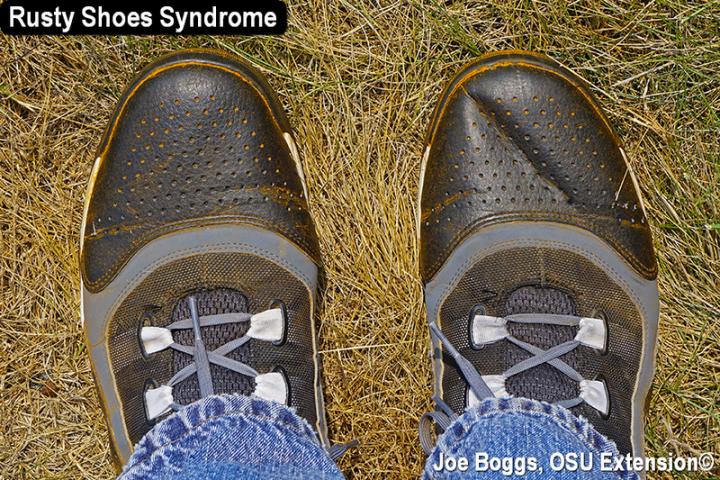 Rust on turfgrass has been a hot topic during recent Tuesday morning BYGL Zoom Inservices.  Amy Stone (OSU Extension, Lucas County) reported that she’s getting numerous reports of “rusty shoes” in her part of Ohio.  Dave Shetlar (Professor Emeritus, OSU Entomology) noted that the shoes worn by participants in a recent outdoor turfgrass training event held in the central part of the state acquired an ocherous glow.  The tangerine dream shoes pictured at the top of this Alert were worn by yours truly (Adidas rust?).  The toes below are those of my better half. 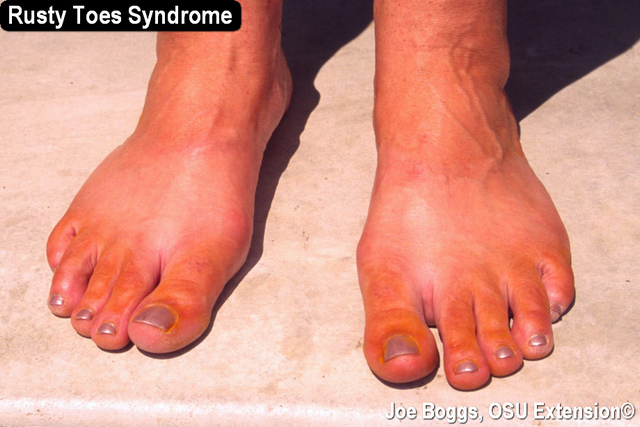 According to the Compendium of Turfgrass Diseases, 3rd edition (American Phytopathological Society), 40 different rust diseases have been identified on turfgrass.  However, the 4 most common rusts on cool-season turfgrass in Ohio and the fungi behind the infections are leaf rust (Uromyces dactylitis), yellow striped rust (Puccinnia striiformis), crown rust (P. coronate), and stem rust (P. graminis). 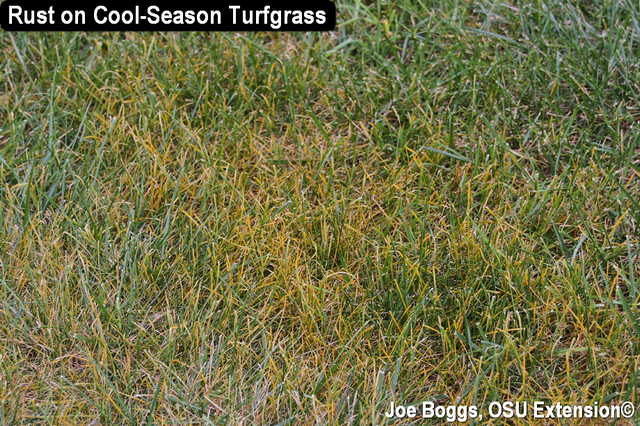 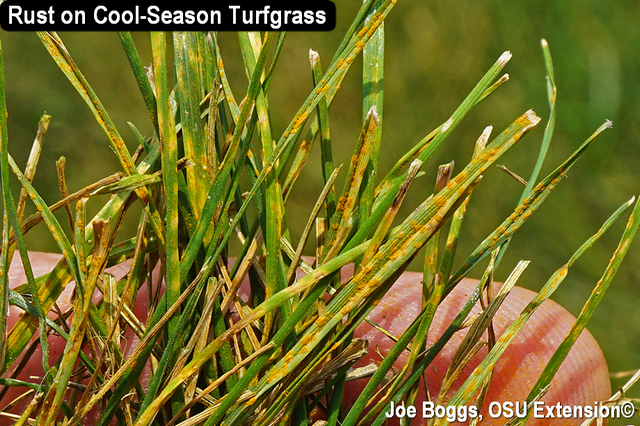 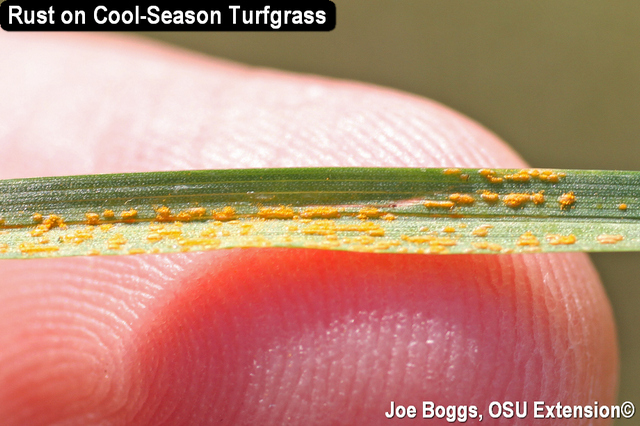 These fungal pathogens and associated diseases have the potential to cause serious harm to turfgrass.  However, rusts on Ohio turfgrass seldom progresses beyond a nuisance with lawnmowers, lawn edgers, shoes, toes, small children, dogs, etc. acquiring an orange patina. 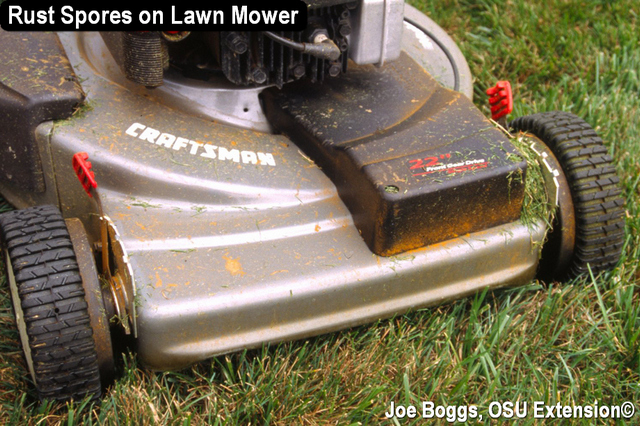 Historically, rusts on turfgrass were associated with perennial ryegrass (Lolium perenne) and Kentucky bluegrass (Poa pratensis).  There was a time when rust provided an almost sure-fire way to identify perennial rye mixed with turf-type tall fescue (Festuca arundinacea).  Ryegrass had orange blades at this time of the year.  However, tall fescue, as well as fine fescues (Festuca spp.), are now included in the turfgrass orange marmalade. 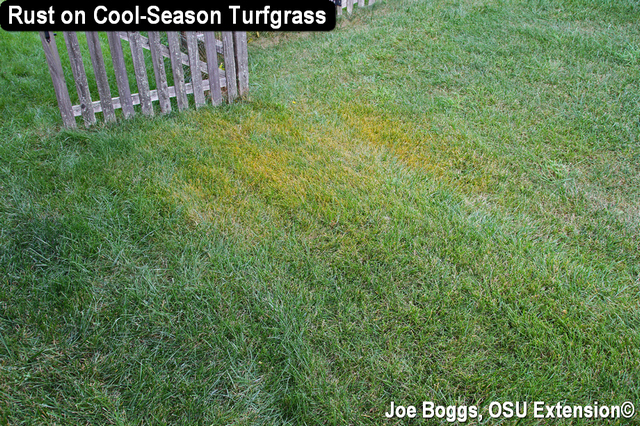 It’s no accident that turfgrass may acquire an orange glow at this time of the year.  Rust infections proliferate on cool-season turfgrass that’s growing slowly during the dog days of summer.  There’s a reason they are called “cool-season.”  Rapidly growing turfgrass in the spring and fall presents a moving target to the rust fungi.

The same perspective applies to nutrient-starved turfgrass.  We are approaching an optimal time of the growing season for making a turfgrass fertilizer application.  If a soil test has revealed there are no soil nutrient deficiencies, an application in early September that provides nitrogen will help the turfgrass grow past the orange-grasp of rust.  A slow-release form of nitrogen is recommended so the macronutrient is available over a longer period.

Of course, if a little bit is good, a lot is not better!  While rust, as well as dollar spot, tends to occur most often on turfgrass suffering from a nutrient deficiency, other diseases such as brown patch and Pythium blight can be made worse by over-applications of nitrogen.  Thus, it’s important to pay close attention to product application recommendations including using the proper fertilizer equipment settings. 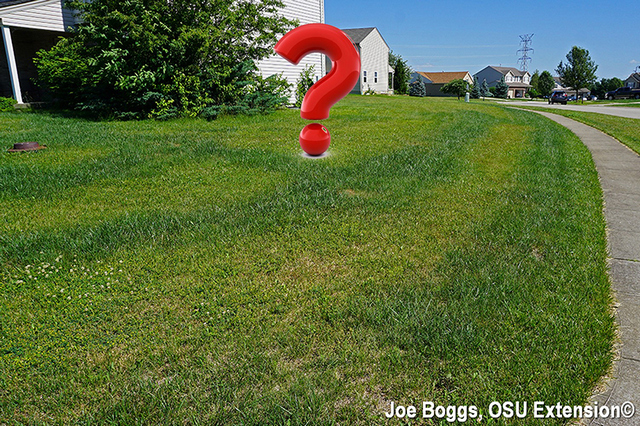 Fungicide applications made before fungal rust infections become rampant can help slow disease development.  However, the time and expense are seldom justified.  Rust on turfgrass is usually a fleeting late summer problem and can be better managed by satisfying the nutrient needs of turfgrass in the early fall.