White Masses on the Stems of Redbuds, Wafer-Ash, and Other Trees 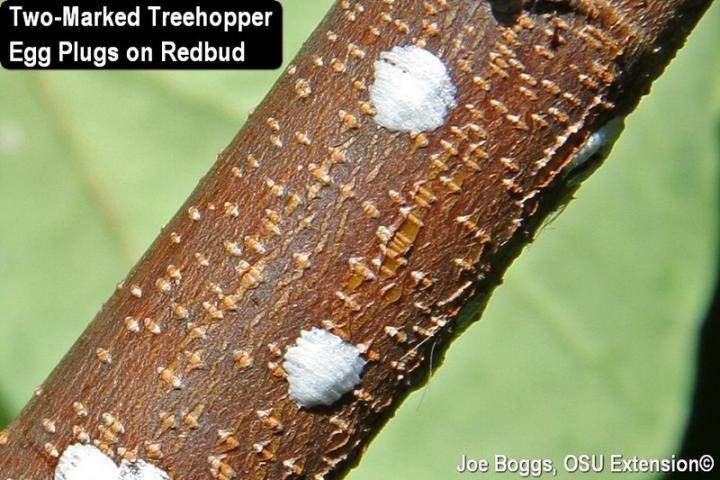 However, the white masses are the "egg plugs" of the Two-Marked Treehopper (Enchenopa binotata).  The females use their sharp, saw-like ovipositors to cut slits in the bark of their host trees and insert eggs into the stems.  They cover the bark wounds with the white, sticky egg plugs presumably to protect the eggs.  The plugs also contain a chemical attractant that draws other females to lay their eggs near one another 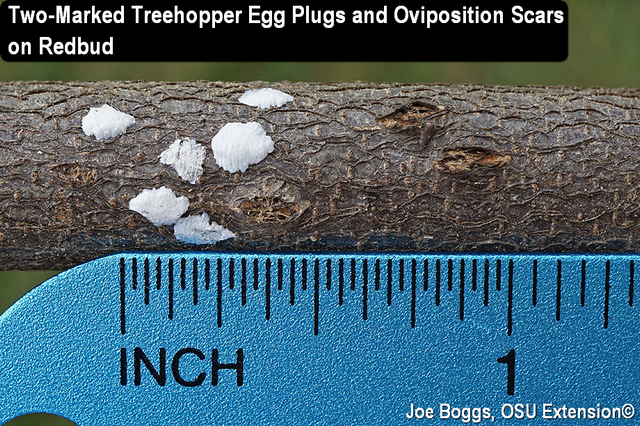 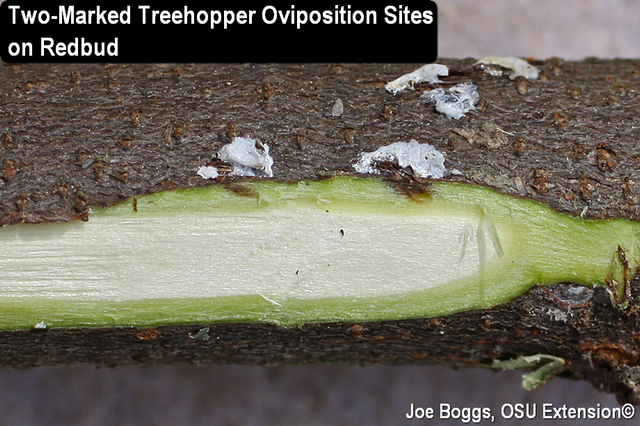 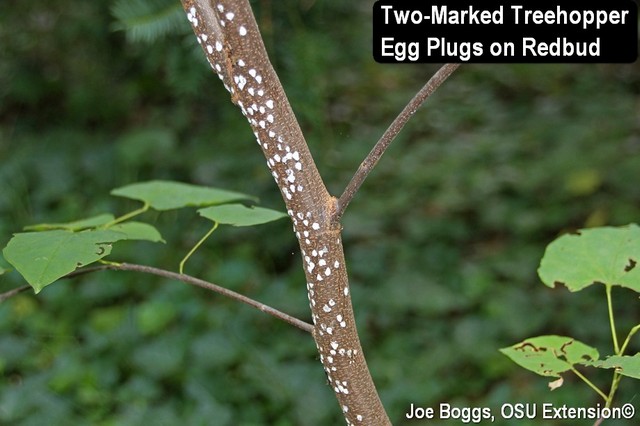 Treehoppers (family Membracidae) are sometimes called “thorn bugs” for their unusual appearance.  The first segment of an insect’s thorax located just behind the head is called the prothorax and the plate covering the top of the prothorax is called the pronotum.  Treehoppers commonly have enlarged pronotums configured into a range of fantastical shapes from pointy knobs to hatchet-like protrusions.  If you look closely at the two-marked treehopper, you’ll note that the pronotum forms a knob at one end and is elongated to fit between the wings and cover the abdomen. 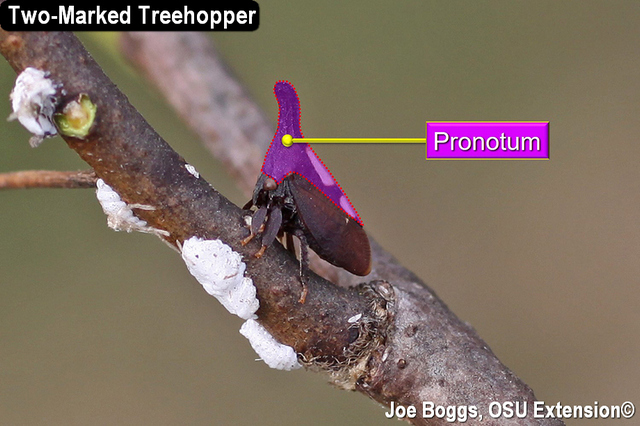 A Host of Variations 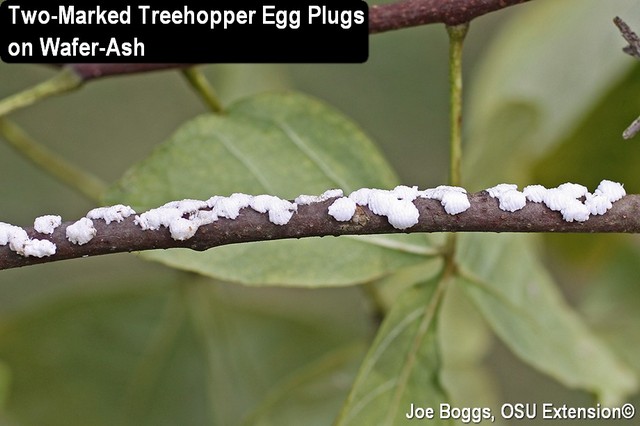 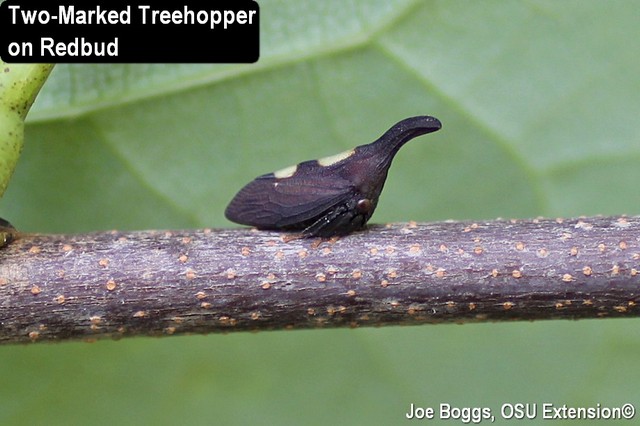 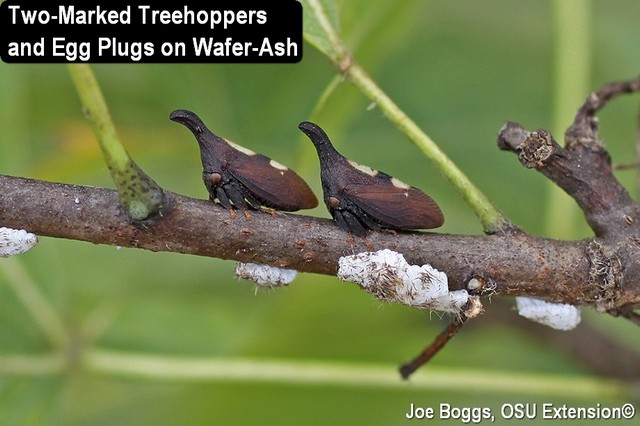 The driving forces behind the development of multiple variants of the two-marked treehopper have been the subject of several scientific papers.  This is one of my favorite titles, "You stay, but I Hop: Host shifting near and far co-dominated the evolution of Enchenopa treehoppers."  I've included links to this paper and a few others that describe fascinating discoveries made about this treehopper (see "Selected Reading to Cure Insomnia" below).

Male two-marked treehoppers entice females by vibrating on plant stems and leaves to produce a "come hither" vibration detected by the females using specialized structures on their legs.  Using sophisticated voyeur equipment, researchers have listened in and discovered the males on one host plant produce entirely different vibration patterns compared to males on other hosts.  They don’t catch the same waves.

Out-of-sync life cycles may also have contributed to the host-specific divergence of two-marked treehoppers.  The treehopper variants all look the same and practice the same egg-laying behavior.  However, their life cycles vary based on the host.  Researchers have found that egg hatch in the spring is tied to sap flow.  The eggs laid on one host species may hatch at a different time compared to those laid on another host species depending on when the sap begins to flow for the two species.  Adults that accidentally land on their non-host may think “I just wasn’t made for these times.” 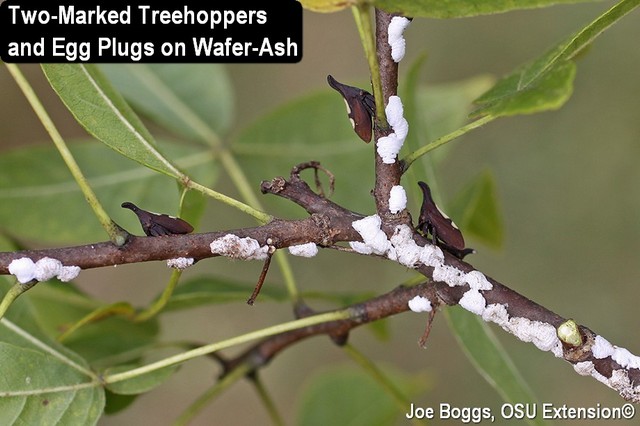 Although both the adults and nymphs suck juices from leaf veins and petioles, their feeding damage is also considered inconsequential even when high populations occur.  So, control of these treehoppers is not required.

2017 You stay, but I Hop: Host shifting near and far co-dominated the evolution of Enchenopa treehoppers