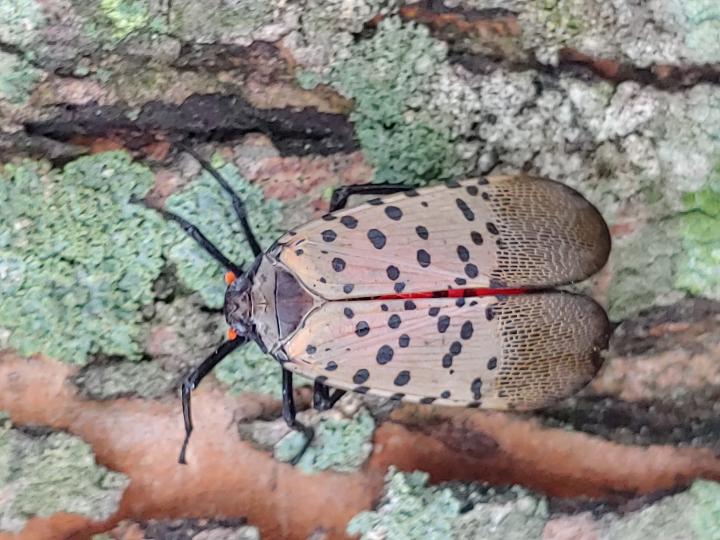 Last week, the Indiana Department of Natural Resources announced that the spotted lanternfly (Lycorma delicatula) was detected in Switzerland County. As a result, the information was shared via a BYGL Alert last Monday (https://bygl.osu.edu/node/1832). Cornell University's Integrated Pest Management Program has updated a SLF map as seen below that gives the big picture of where SLF is known to be in North America.

As you can see, the new find in Indiana is in the southeast corner along the Ohio River, across from Kentucky and near Cincinnati, Ohio. This discovery is the farthest west infestation to date. I would also like to point out that Ohio only has a single county, Jefferson County in the southeast portion of the buckeye state, that is know to have SLF population.

Both of the finds in Ohio and Indiana, were reported by residents. This is important to note and the reason we are turning to all Ohioans to be on the look out for the SLF. Currently, you would be seeing later instar nymphs and/or adults if you would come across this non-native invasive planthopper.

The application was made using a mist blower mounted on the back of a truck. This was the second treatment made in the block this year.

The treatment block is acrossed the street from the initial discovery brought to ODA and OSU's attention by a local resident who became familiar with the insect, as a result of social media outreach efforts by Erika Lyon, the OSU Extension's Agriculture and Natural Resources Educator in Jefferson County. This is an excellent example of how outreach is successful. If this man did not say anything, the population could have continued to build and expand before it became more noticable by someone else.

The hillside in Jefferson County is borded by train tracks and the street seen in the photo above.

There are also SLF traps in the area for ongoing monitoring. This trap was place on a tree of heaven (Ailanthus altissima) tree, a preferred host of the insect. The insects climb up the trunk of the tree, and ultimately into the plastic bag. The traps are monitored and if SLF is present, those numbers recorded for tracking purposes.

In addition to the stands of tree of heaven on the hillside, this area also had a lot of wild grapevines, another SLF favorite.

While the treatment was being applied, Jim Jasinski, OSU's Integrated Pest Management (IPM) Coordinator and I did a little more scouting near the location of the initial find. It was there where we found several adult SLF. The first find was on a building, and the others were found climbing up a utility pole alongside the road, which is something that has been observed in other SLF infestations. We simply mention this because, in addition to scouting for SLF on their prefered hosts, looking a these types of poles or vertical structures might not be a bad idea. While we hope you don't find SLF, we do need everyone's help is looking for this pest.

And as a reminder, if you find an insect that you suspect is SLF, you can use the Great Lakes Early Detection Network (GLEDN) App, or contact ODA directly by phone, email, or their online reporting sytem. Their contact information can be found at:  https://agri.ohio.gov/wps/portal/gov/oda/divisions/plant-health/invasive-pests/slf