Look Up for Cottony Maple Leaf 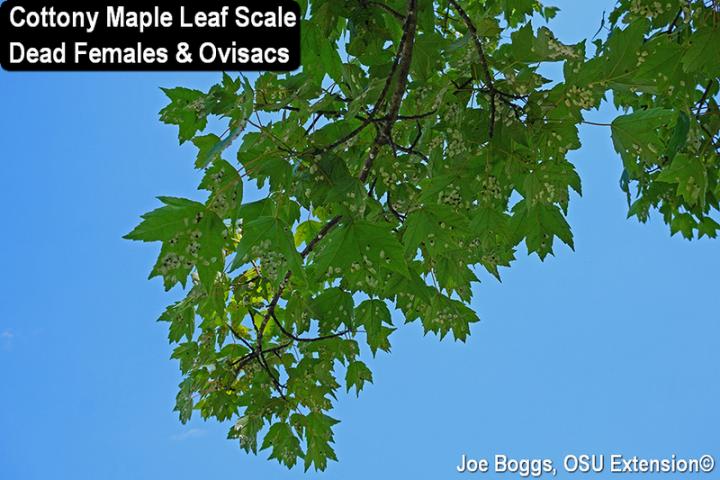 Cottony Maple Leaf Scale (Pulvinaria acericola) was once a relatively common pest of maples in Ohio.  However, this native “soft scale” virtually dropped off our radar until last year when noticeable populations were reported in the central and southwest parts of the state. 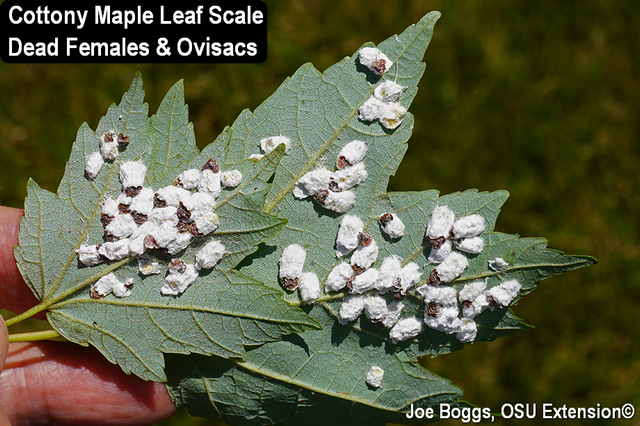 The cottony maple leaf scale is so named because the females exude their eggs in an elongated, white, cottony structure called an ovisac which is stuck onto the underside of the leaves.  A close examination of the ovisacs reveals the eggs are held inside a sack-like matrix of sticky, silk-like material. 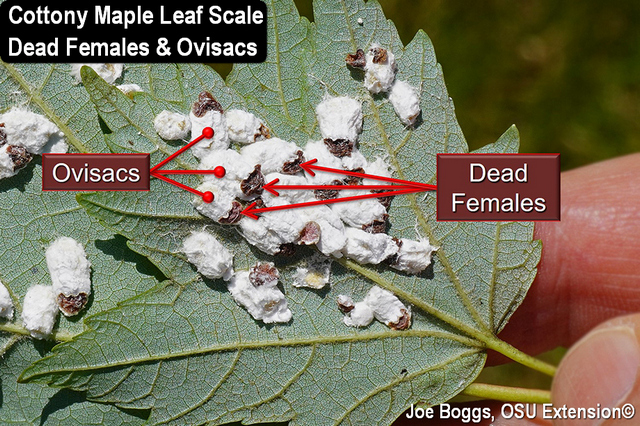 The ovisacs are elongated because the female crawls forward as she's laying her eggs.  She dies once she finishes and her body remains visible as a shriveled, reddish-brown husk at the end of the ovisac.  On average, her ovisac may contain more than 2,500 eggs.  Small wonder she's shriveled! 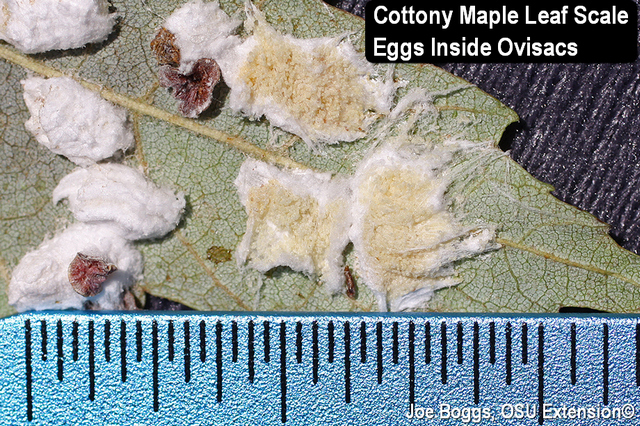 It's amazing how well the chalky white ovisacs can remain concealed awing to their location on the underside of leaves.  This is particularly true with the drooping leaves of red maples (Acer rubrum).  Infestations are often discovered only by walking beneath the canopy. 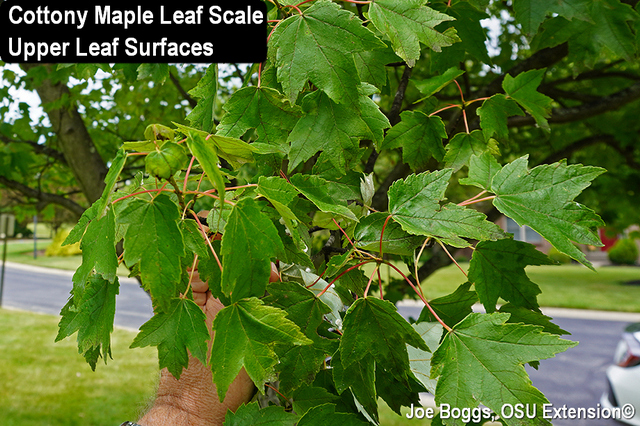 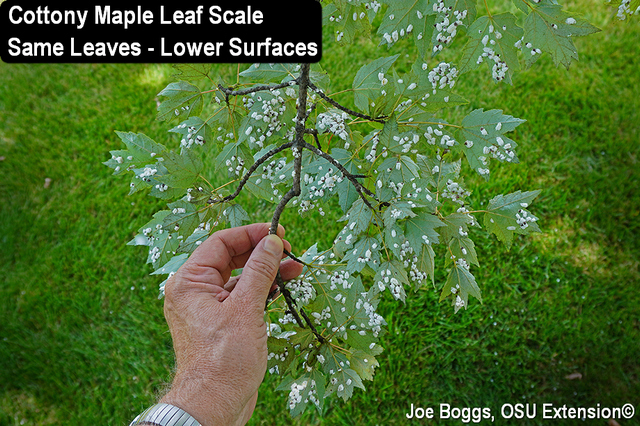 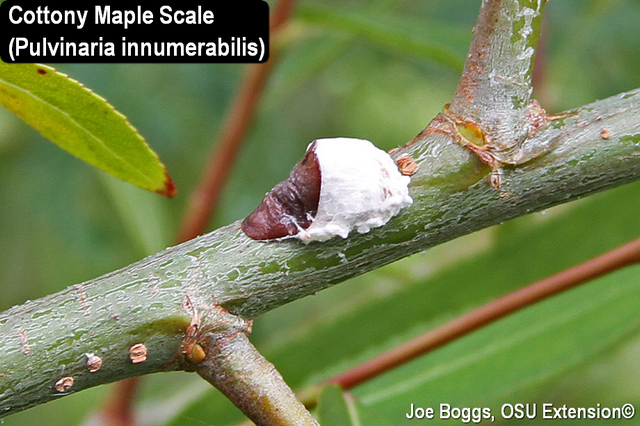 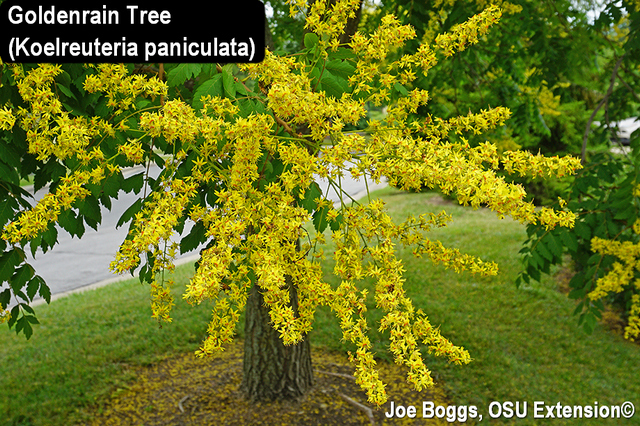 The first instar nymphs (crawlers) that hatch from the eggs are cream-colored to pale green and very small making them difficult to see with the unaided eye.  Pieces of double-sided sticky tape are highly effective in helping to detect egg hatch and dispersion of the crawlers. 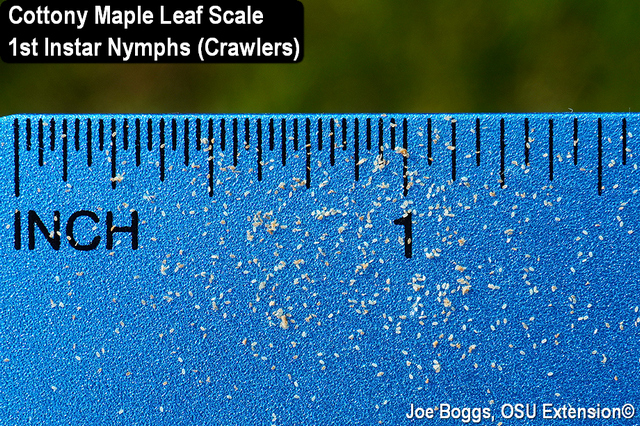 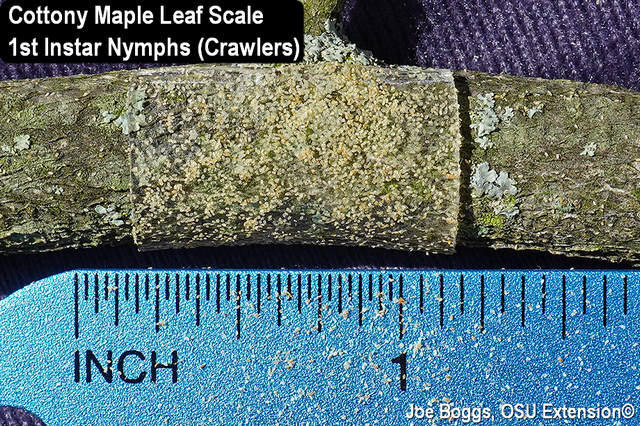 The crawlers scatter over several leaves and settle along the leaf veins where they insert their piercing-sucking mouthparts into phloem vessels.  They tap plant sap to acquire both carbohydrates which provide energy as well as amino acids which are the building blocks for proteins and enzymes. 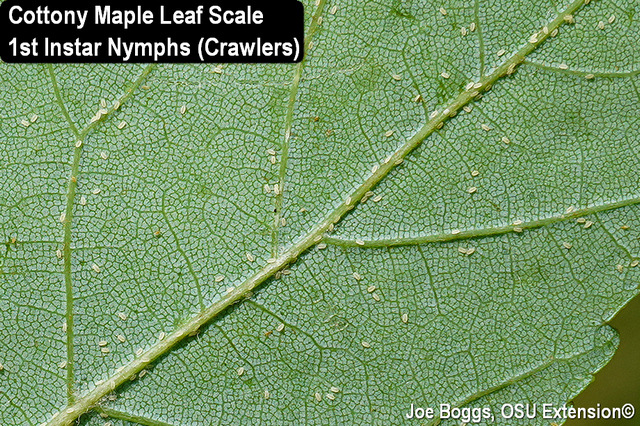 However, the phloem sap contains only trace amounts of amino acids compared to huge amounts of dissolved carbohydrates.  This means the crawlers must process a large quantity of sap to extract the necessary amino acids.  They discharge the excess sugar-rich liquid from their anus in the form of a sticky, sugary "honeydew" which is just a nice name for scale diarrhea.

The honeydew drips onto branches, leaves, understory plants, lounging gardeners, etc.  It's common for the honeydew to become colonized by black sooty molds to produce an unsightly mess on anything located beneath the canopy. 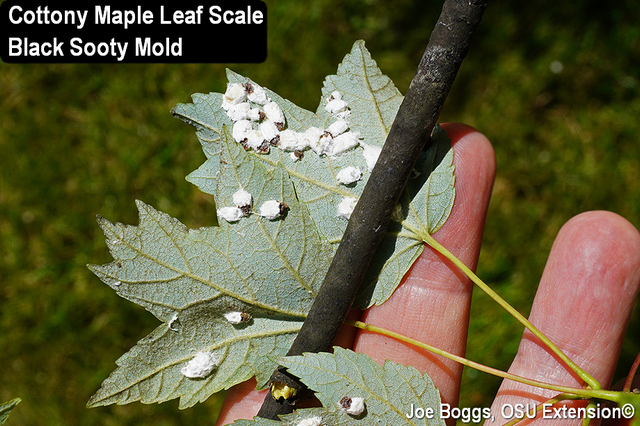 The nymphs molt into second instars as they feed and eventually migrate from the leaves to twigs in early fall.  In the spring, the male and female nymphs mature, mate and the females crawl to the underside of leaves to lay eggs starting the life cycle all over again.  There is one generation per season.

The cottony maple leaf scale prefers maples which isn’t surprising given their common name.  They are most commonly found on red (A. rubrum) and silver maples (A. saccharinum); however, they may also produce noticeable populations on sugar maple (A. saccharum) and boxelder (A. negundo).  Other occasional hosts include andromeda (Pieris Japonica), flowering dogwood (Cornus florida), hollies (Ilex spp.), and sourgum (Nyssa sylvatica).

Although high populations can occasionally cause premature leaf drop and branch dieback, the overall impact of the cottony maple leaf scale is strongly related to plant health.  Impacts are much greater on trees that are stressed.  Thus, the first line of defense against this and other soft scales is to focus on maintaining tree health.

Control is seldom required particularly since there is a wide range of beneficial insects such as predators and parasitoids that can keep scale populations in check.  For example, lady beetles belonging genus Hyperaspis are commonly found chowing down on this and other soft scales. 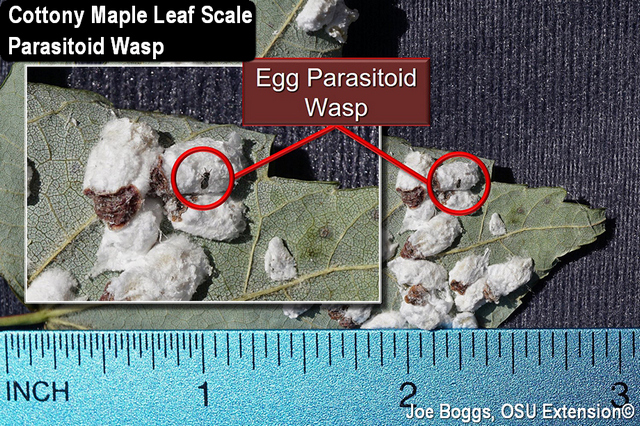 Hyperaspis lady beetles are collectively referred to as sigil lady beetles.  This the second largest coccinellid genus with 94 species found in North America north of Mexico. These small, round beetles sport markings of various shapes and colors on a black background.

However, it's the larvae that are the real show-stoppers!  In a twist on "you are what you eat," the larvae are typically covered in white, flocculent material making them blend with the white scale ovisacs.  Of course, these are wolves in sheep's clothing.  Unlike the immobile ovisacs, the lady beetle larvae are highly mobile and can be observed moving around to feed on the scale flock. 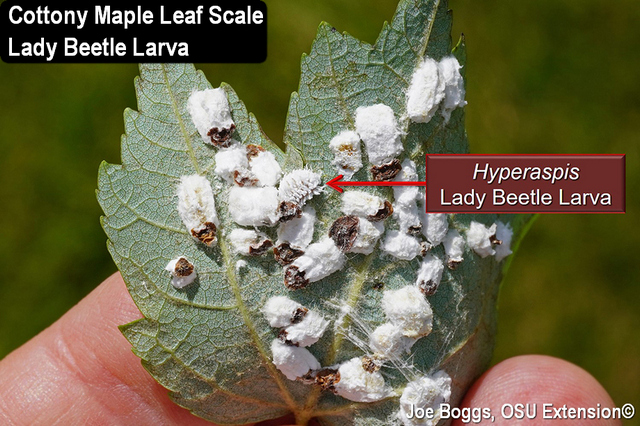 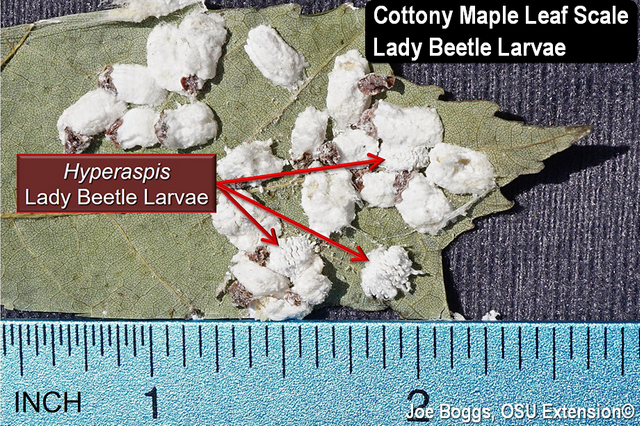 If control is deemed necessary, systemic insecticides will have less of an impact on beneficial insects compared to topical contact insecticides.  NC State has an excellent fact sheet on the cottony maple leaf scale that includes insecticide recommendations that are compatible with beneficials.

You can access the NC State Fact Sheet by clicking this hotlink: