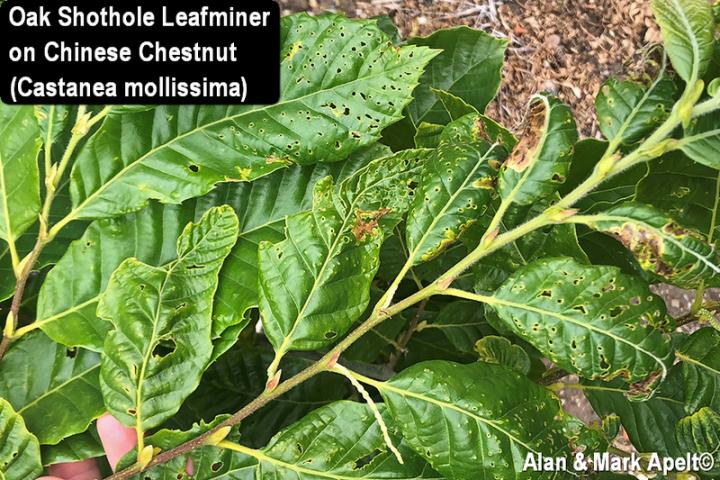 I received a phone call yesterday from Mark Apelt who asked whether or not the oak shothole leafminer fly (Japanagromyza viridula, syn. Agromyza viridula) could also infest chestnuts.  It was an interesting question given that oaks and chestnuts belong to the same family, Fagaceae.

Mark owns a 400-tree plantation called Buckeye Chestnuts in northeast Ohio.  He reported that he is seeing leafmines as well as holes in the leaves of his Chinese chestnuts (Castanea mollissima).  However, prior to Mark's phone call, none of the literature that I had come across regarding the oak shothole leafminer listed hosts beyond oaks. 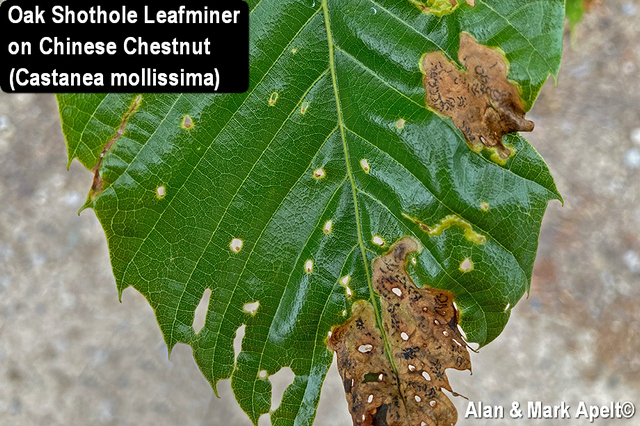 There is a moth, Dyseriocrania griseocapitella, that produces leafmines in chestnut and oak leaves; most frequently black oak (Quercus velutina).  The tiny moth is grouped with the “microlepidoptera” so named because of their small size.  However, the females use their straw-like proboscis to sip nectar.  They don’t use their ovipositors like the oak shothole leafminer and other members of the Agromyzidae fly family to pierce newly expanding leaves to release sap which they drink using their lapping mouthparts.  So, they don’t produce holes in the leaves like the shothole leafminer fly.

After our phone conversation, Mark sent the pictures shown in this Alert.  They clearly show holes in the leaves à la oak shothole leafminer as well as prominent leafmines.  His images caused me to dig further into the literature.  I found two (there may be others) scientific papers that reference chestnuts and oaks as hosts for J. viridula [see “References” below].  Scheffer et al. describe J. viridula as “Leafminer of Quercus, possible Castanea (Fagaceae),” and de Sousa and Couri are more definitive with noting “Host-plants: Castanea sp., Quercus rubra, Quercus spp.). 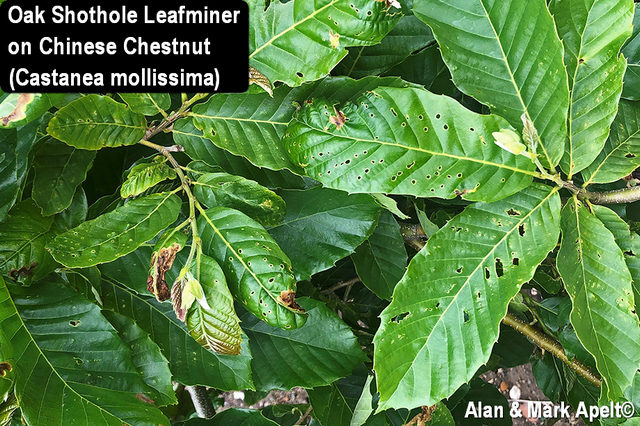 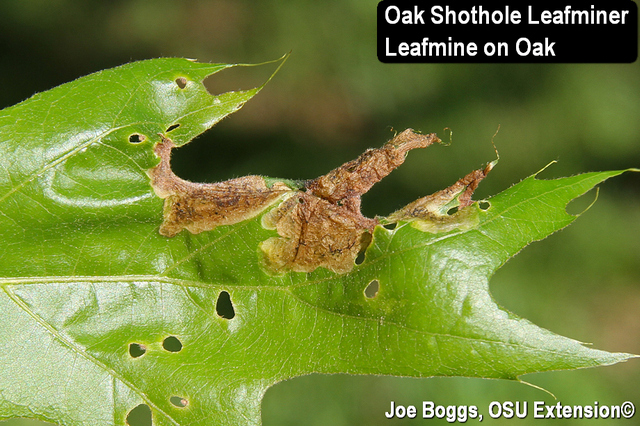 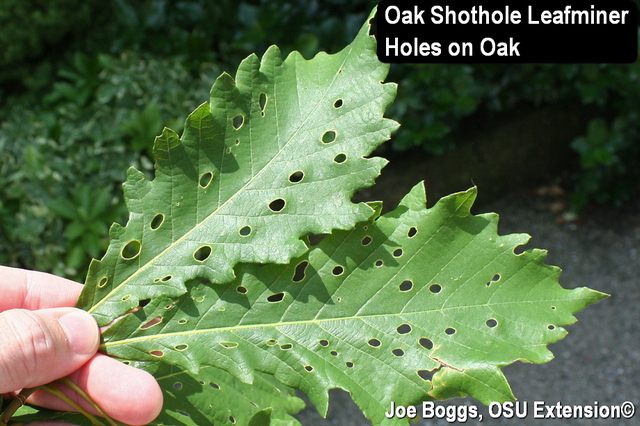 As you can see from the pictures taken by Mark and his father Alan, their Chinese chestnuts are showing all of the hallmark symptoms of the oak shothole leafminer including leafmines as well as the characteristic holes created by the puncture wounds made by the female flies with their ovipositors.  You can compare the damage with the other pictures of oak shothole leafminer damage on oaks that I included in my BYGL Alert (“Holey Oak Leaves”) by clicking this hotlink:

Mark’s observations and photographs as well as the scientific literature provide support for J. viridula using chestnuts as another host; however, many questions remain to be answered.  For example, does the agromyzid fly also infest (or infest equally) other chestnuts such as Chinese chinkapin (C. henryi), Japanese/Korean chestnut (C. crenata), European chestnut (C. sativa), and American chestnut (C. dentata) as well as the hybrids?  Are the chestnuts equal to oaks regarding host preference? Does the fly target the leaves across all hosts at the same stage in leaf development?

Mark's images appear to show leafmining activity that is more dramatic on the Chinese chestnuts compared to what I’ve observed on oaks.  Is there a difference regarding host impacts? 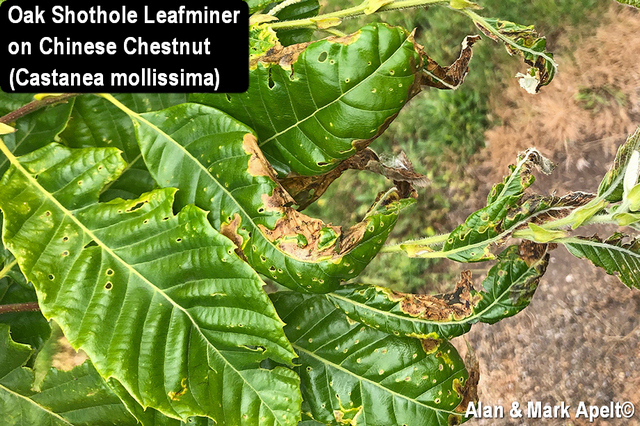 These are just a few questions that should be pursued by observation, research, or both.  Of course, we wouldn’t be considering any of these questions without Mark reaching out to ask a very important first question regarding host range.