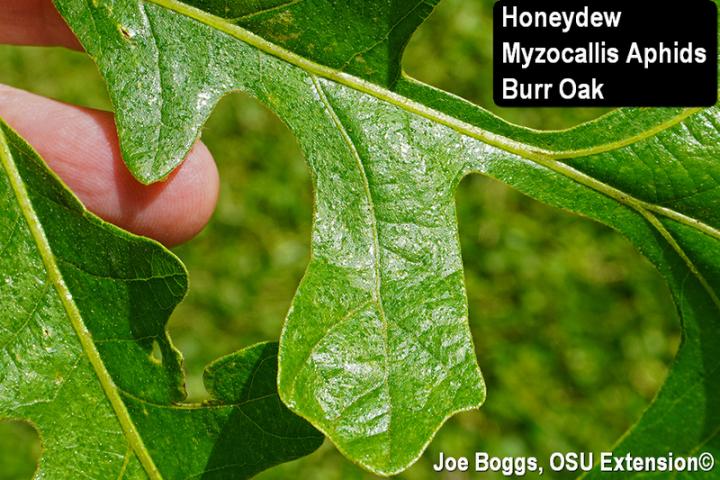 I recently came across a burr oak (Quercus macrocarpa) with leaves covered in clear, sticky honeydew.  I could also feel fine droplets raining down as I stood beneath the canopy.  Indeed, my camera lens collected so many tiny droplets I had to retreat to my car to clean it before taking more pictures.

I found Myzocallis aphids (Myzocallis spp.) on the undersides of some leaves.  However, the amount of honeydew showering me and my camera seemed way out of proportion to the number of leaves infested as well as the overall aphid population density.  Although I found a few aphid colonies “mainlining” sap, many leaves had small numbers of aphids and the number of leaves with and without aphids was almost equal. 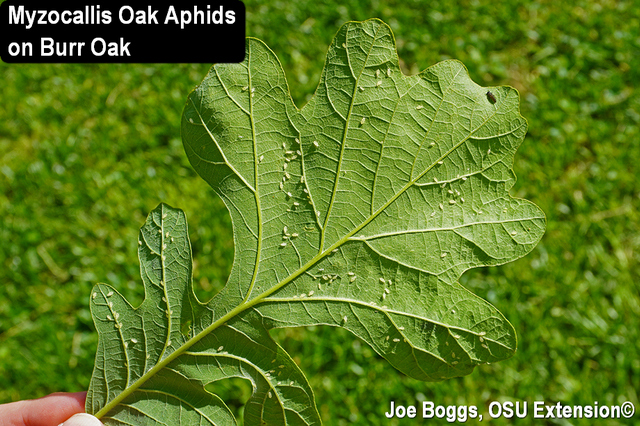 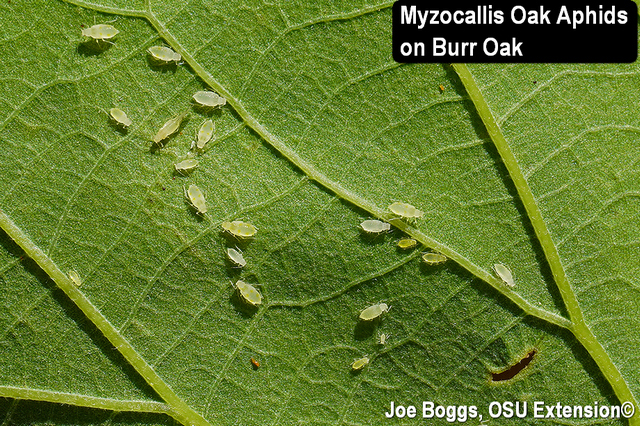 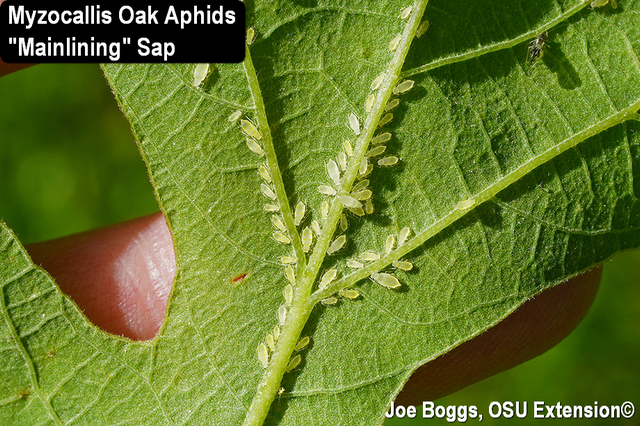 Of course, aphids aren’t the only honeydewers that may infest oaks.  As I noted in yesterday’s Alert on calico scale (Eulecanium cerasorum), this soft scale may be found on oaks as well as oak lecanium scale (Parthenolecanium quercifex) and the similar-looking European fruit lecanium scale (P. corni).  All are notorious sources of copious quantities of honeydew.  However, a close examination of the twigs and stems failed to reveal soft scales or any other honeydew source beyond the aphids. 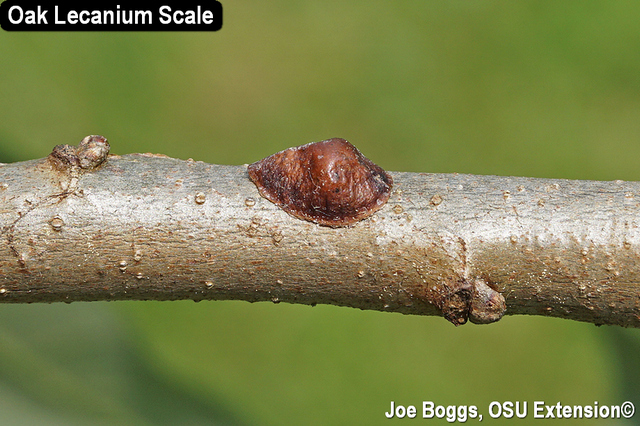 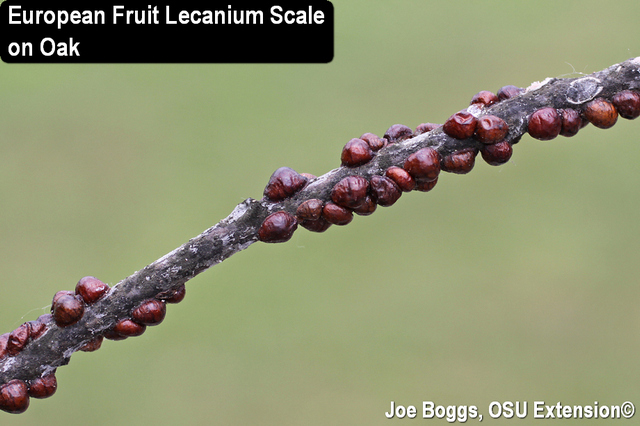 This is not the first time I’ve encountered Myzocallis aphids on a member of the white oak group in southwest Ohio.  It’s also not the first time I’ve been flummoxed by a small number of aphids pumping out a seemingly inordinate amount of honeydew.  In 2012, I observed Myzocallis oak aphids on a mature white oak (Q. alba) that had sticky leaves as well as leaves covered in black sooty molds. 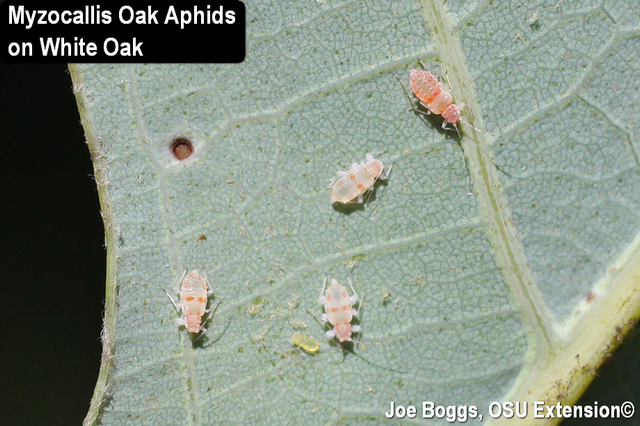 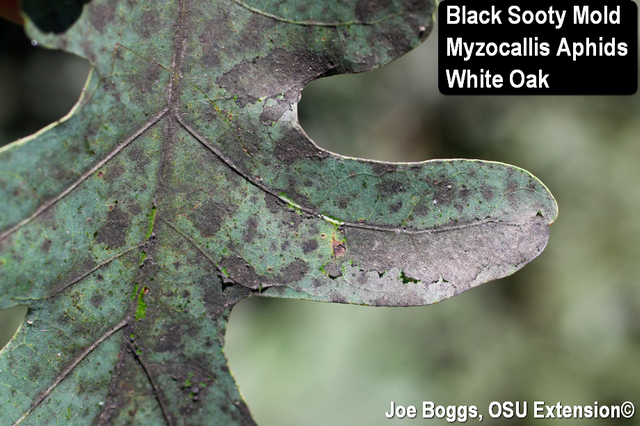 In my first encounter, I thought the white oak was infested with a soft scale because the number of aphids just didn’t seem to match the heavy flow of honeydew.  But I could not find another source for the honeydew and concluded that I had happened onto the aphids/honeydew/sooty molds as the aphid population was “crashing.”

However, this was not the case with my most recent encounter with Myzocallis aphids on oaks.  There were immatures as well as a few adults, so the population had not yet “aged out,” and the “3-P’s” (predators, parasitoids, and pathogens) were largely still on the horizon.  The bottom line is that I must conclude these aphids are champion honeydewers.

On the other hand, as with the vast majority of aphids on hardwood shade trees, the oak aphids cause no appreciable harm to overall tree health.  They are a nuisance pest at most, so no controls are necessary.

Besides, help is on the way.  I consider aphids the wildebeests of the insect world:  everything eats them.  I’m certain the 3-P’s will eventually catch up as evidenced by a lacewing larva with its wicked sickle-shaped mandibles and several alligator-like multi-colored Asian lady beetle (MALB) larvae (Harmonia axyridis) lurking among the aphid herd. 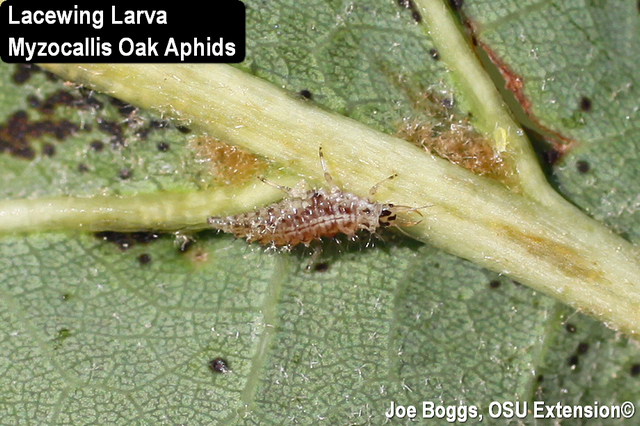 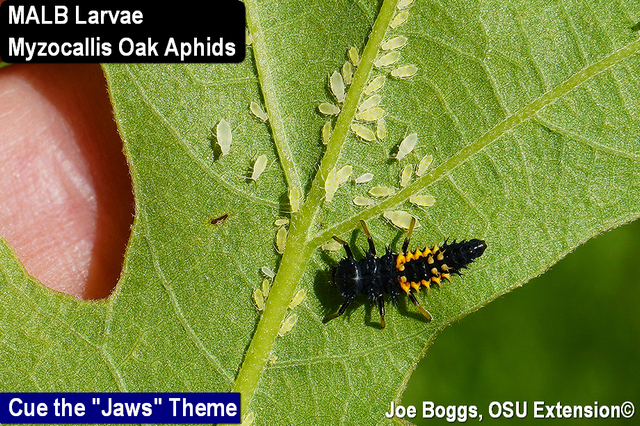