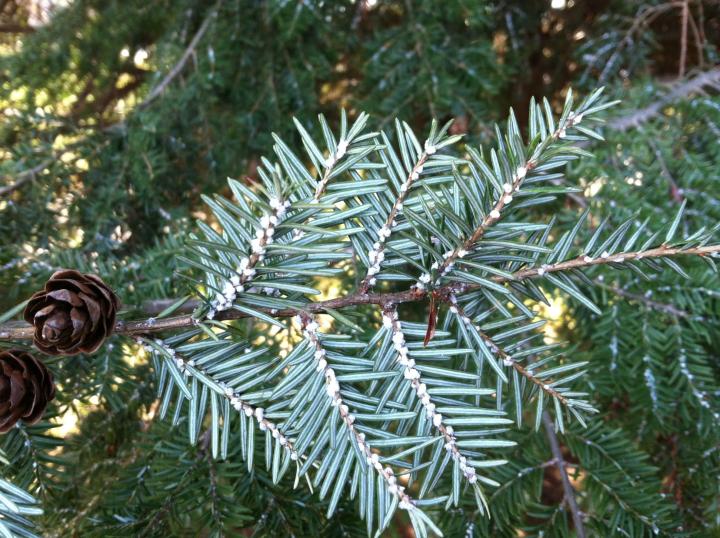 Since November of 2020, there have been a number of new infestations of hemlock woolly adelgid (HWA) discovered in Ohio. These discoveries have been made in Mahoning, Summit, Jefferson, and Columbiana counties. This brings the total amount of known HWA-infested counties in Ohio to 16. The question for the homeowner and/or landscaper is: What should I do? The short answer is: Report it! 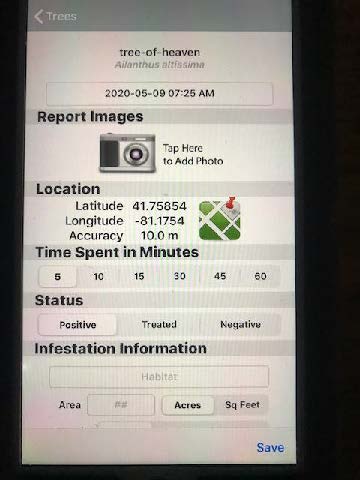 Download the Great Lakes Early Detection Network app to your smart phone. The following video talks about Spotted Lanternfly but the same app can be used to report hemlock woolly adelgid. Download the app, go to Species Categories, snap a picture with your smart phone and send it to GLEDN. Note when you search for the Ap in Google or Apple, type the the words "Great Lakes EDN". 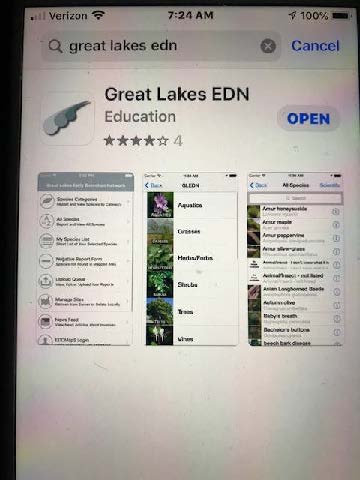 Native to Asia, HWA is an invasive, aphid-like insect that attacks eastern and Carolina hemlocks. 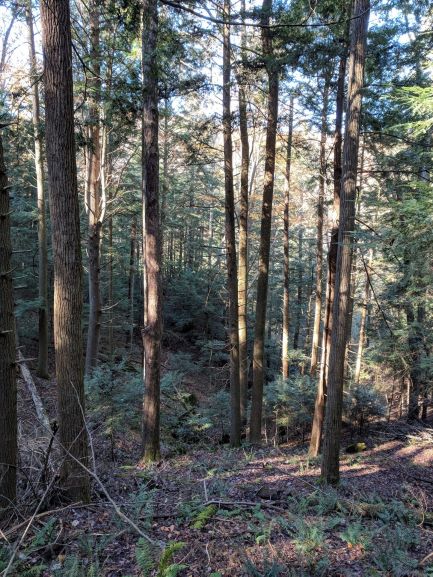 HWA are very small (1.5 mm) and often hard to see, but they can be easily identified by the white woolly masses they form on the underside of branches at the base of the needles. This is most easily spotted from November through May. 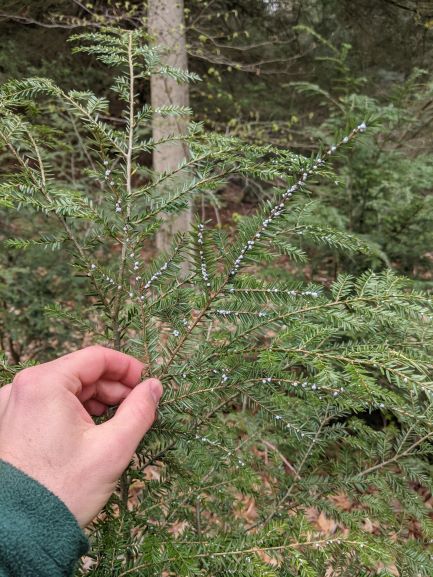 Juvenile HWA, known as crawlers, search for suitable sites on the host tree, usually at the base of the needles. They can be transported over long distances by birds. They insert their straw-like mouthparts and begin feeding on the tree's stored starches. HWA remain in the same spot for the rest of their lives, continually feeding and developing into adults. Their feeding severely damages the canopy of the host tree by disrupting the flow of nutrients to its twigs and needles. Tree health declines and mortality usually occurs within 4 to 10 or more years.

Hemlock woolly adelgid (Adelges tsugae) was accidentally introduced from Japan in the eastern United States in the early 1950s. It was first found infesting native eastern hemlock (a.k.a. Canadian hemlock; Tsuga canadensis) forests in Ohio in 2012. Sixteen counties in Ohio are known to have infestations of HWA. The Ohio Department of Natural Resources (ODNR) Division of Forestry led an effort along with other ODNR divisions to finalize the Eastern Hemlock Conservation Plan in 2017. Active management of HWA is occurring in several areas in Ohio, such as the Hocking Hills (including Hocking Hills State Park and Hocking State Forest), Lake Katharine State Nature Preserve in Jackson County, and in natural areas owned by the Holden Arboretum in Lake and Geauga counties. 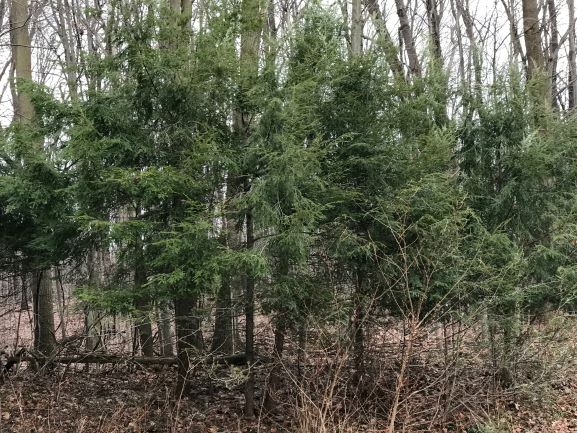 Some chemical insecticides are highly effective at controlling HWA. Chemical controls are the only effective rapid response measure to keep hemlocks healthy and prevent decline and mortality from HWA. In forest ecosystems, chemical controls offer a stop-gap measure to keep hemlocks on the landscape until a more sustainable option, such as biological controls, or HWA-tolerant or resistant hemlocks, can be established. Two systemic insecticides labeled for control of HWA are imidacloprid (which can be applied as a liquid soil drench, basal bark spray, soil tablets, or direct stem injection) 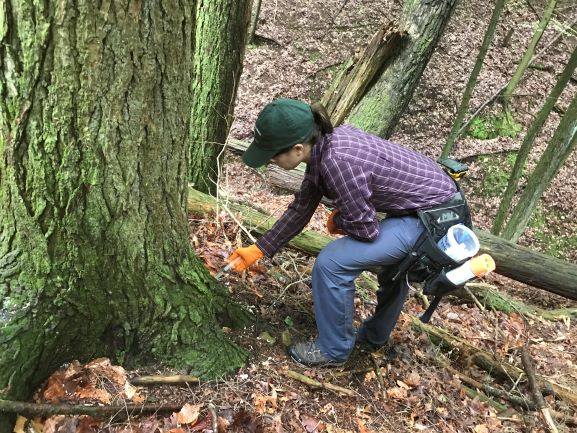 and dinotefuran (typically applied as a basal bark spray). Imidacloprid is the most commonly used systemic insecticide for HWA control, as it is relatively inexpensive and provides up to seven years of residual control with just one application. Dinotefuran is relatively expensive and provides about 2 years of residual control but is faster acting than imidacloprid. The chemical applications are effective, and trees respond with healthy growth the following year after treatment. Before applying any pesticide be sure to read and follow the label, or consider hiring a professional arborist.

For landowners with hemlock trees on their property, it is not recommended to treat your trees with insecticides until after you have confirmed that they are infested with HWA. It is recommended to monitor your hemlock trees for the presence of HWA woolly masses annually in the winter, and work with OSU Extension, ODNR, or Ohio Department of Agriculture to confirm a possible HWA infestation. HWA is a slow killer of hemlock trees, and if infestations are caught early, control is easily attainable in a landscape setting. 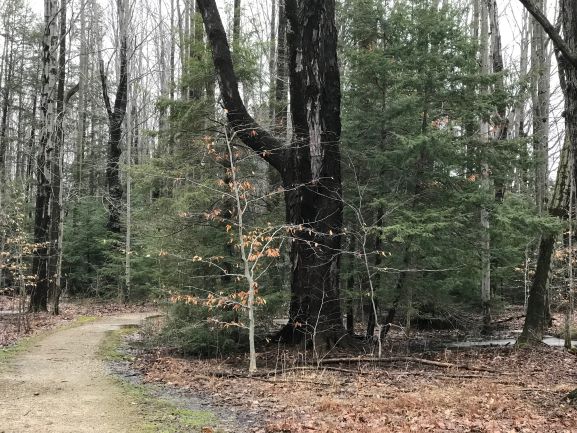 Several insects that are predators of HWA in its native range show promise as biological controls for HWA in eastern North America and have been thoroughly studied and approved by the USDA for release. Biological controls are viewed as a long-term control option for HWA and the hope is that after years of releases, they will become established and help to keep HWA low enough that hemlocks can survive HWA infestation and continue to provide their important ecosystem services. Laricobius nigrinus is a species of beetle native to the Pacific Northwest 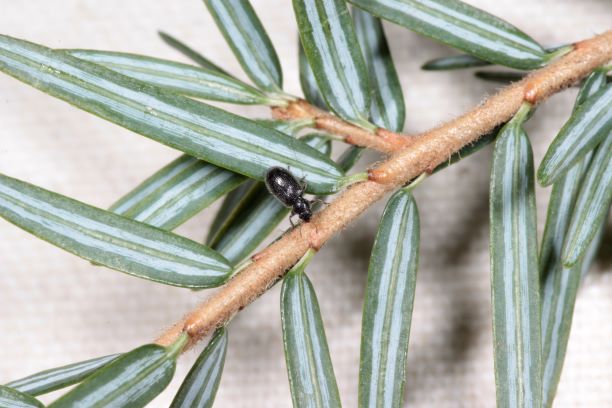 and its relative, L. osakensis, native to Japan, are HWA predators that have been released for many years in the HWA-infested range, including in Ohio. Two species of silverfly (Leucopis argenticollis and L. piniperda) have also been identified as important biological controls for HWA. The establishment of both the beetle and fly species may be very important for the success of biological control of HWA. There is hope that these biological controls will help to reduce the impact of HWA.

If you believe you have found HWA in your Hemlock trees, contact your local OSU Extension office, the Ohio Department of Natural Resources, or the Ohio Department of Agriculture. Reports can also be made using the Great Lakes Early Detection Network app. HWA and other pests can be reported using the app and confirmed reports are added to publicly available maps that can be viewed to monitor the spread and extent of these species: https://apps.bugwood.org/apps/gledn/

As a side note, hemlocks (and other conifers) can also become infested with elongate hemlock scale (EHS; Fiorinia externa). 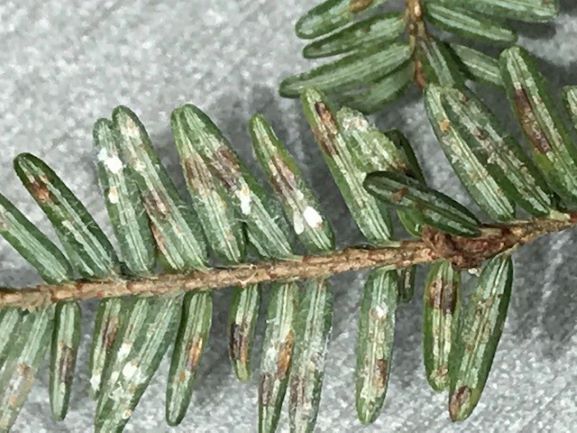 This invasive insect pest is also native to Asia and causes damage similar to HWA (more info on EHS in a past BYGL post here: https://bygl.osu.edu/node/1373). It can be successfully controlled with the systemic insecticide dinotefuran, however, imidacloprid is not effective at controlling EHS. As with management of HWA, it is recommended that you work with your local OSU Extension office or a certified arborist before pursuing chemical treatment of your hemlocks. Active scouting and early detection of HWA and EHS are critical for timely treatment and maintaining hemlock health.

Contributors to this article were Tom Macy - ODNR, and David Apsley - OSU.