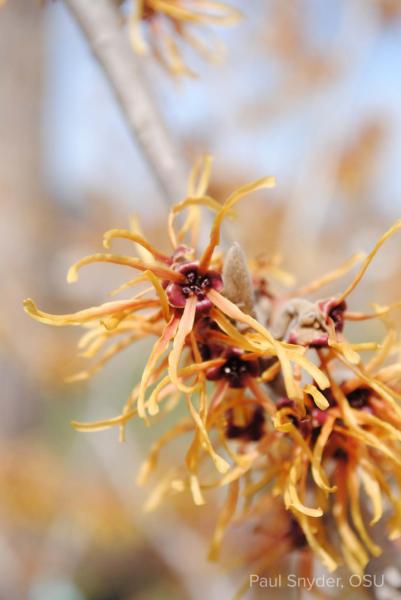 What is a Witch-hazel?

A witch-hazel (Hamamelis) is not a true hazel, Corylus, though the foliage and fruit do resemble true hazels. The two genera are not related and belong to different families (Hamamelidaceae vs. Betulaceae).

All members of the genus flower in the extremes of the season.  H. virginiana, the eastern witch-hazel, flowers from October until December while other species flower through winter and into early spring.

Flowers are borne in clusters of three on brown axillary peduncles. There are four strap-shaped petals per flower, 1 mm wide by 10 to 20 mm long. The petals they may be twisted, crimped, or curled, or a combination of those characteristics depending on the parentage. These petals open and close based on the temperature, typically opening on sunny days when temperatures are near or above freezing. Some species and cultivars are quite fragrant.

Witch-hazels are pollinated by many different insects including fruit flies, blow flies, wasps, beetles, and bees. Most recently, Bernd Heinrich published an article in Scientific American (1987) in which he describes Hamamelis being pollinated by a few species of owlet moths, a name given to a group of moths in the family Noctuidae. These moths are active during winter. During the moths rest and their body temperature drops to near freezing as they enter a state of torpor. At night, however, these moths become active by shivering, a process which raises their body temperature as much as 50 degrees, enabling them to activate their flight muscles. While owlet moths typically feed on sap, they have been observed feeding on flowers.

The floral structure of witch-hazels is adapted to insect pollination. The reproductive structures of Hamamelis are small and the anthers are located in the pathway that insects use to gather nectar.  This is in contrast to plants that are adapted to wind pollination which typically have large, feathery anthers and produce a great amount of pollen. The flowers remain receptive to pollen for long periods of time. These plants have evolved a brilliant adaptation to ensure their genetics are passed on to the next generation because they flower at a time when there is little to no competition from other plants for pollinators.

Moreover, once these plants are pollinated, fertilization doesn’t occur right away as it does for other flowering plants. Rather, it occurs in the spring, and for our native H. virginiana, that's five to seven months after pollination!

The fruit is made up of a two-valved capsule containing two shiny black seeds. The seeds are dispersed as the capsule dries, placing pressure on the bottom of the seed. The seeds are shot out of the capsule with such force that they can land up the 40 feet away.

Witch-hazels can be grown in full sun to part shade, though they flower best in full sun. They prefer soils that are moist but well-drained that are slightly acidic and high in organic matter.

Hamamelis ovalis, the Big-leaf witch-hazel is the most recently described species. It was found in 2004 growing on a military base in southern Mississippi by Steve Shelby, who was conducting a botanical survey. In 2019 populations were also discovered in southeast Georgia. The leaves of this species are two to three times larger than those of H. virginiana and the flowers are various shades of red with some near pink. Despite its deep south roots the species is surprisingly hardy.

Today many xintermedia hybrids are available on the market as the result of an accident that happened at the Arnold Arboretum. In 1928, Arnold Arboretum propagator William Judd collected seed from H. mollis growing next to H. japonica. The resulting seedlings proved to be hybrids, exhibiting the best characteristics of both parents: large, abundant flowers + fragrance and better winter hardiness. This hybrid was given the name xintermedia in 1945. This first hybrid, which was recognized for its superiority above its peers, was introduced as ‘Arnold Promise’ in 1963. It is still widely available in the trade today.

Breeding work on this genus is truly just beginning. Additional collections are being made from unique populations in China and Japan. Furthermore, the discovery of a new species in North American introduces additional floral colors. Due to the close genetic relationship between our native species, the breeding potential is promising. Hybrids are being made and evaluated.