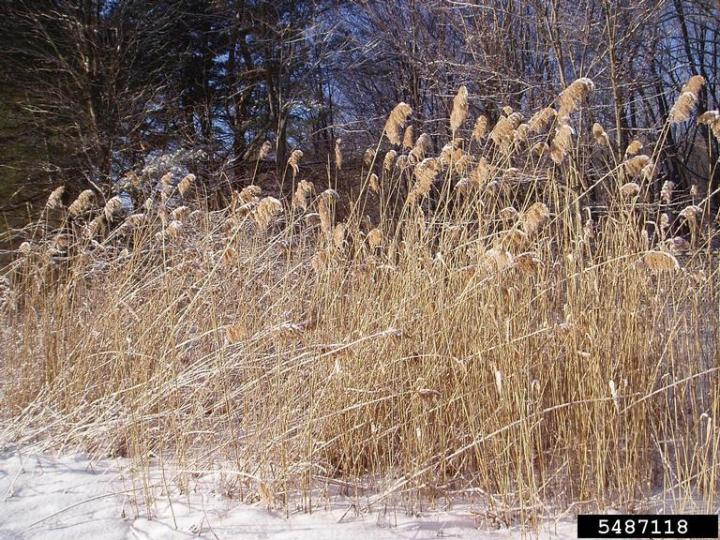 Phragmites (Phragmites australis) is a non-native perennial grass this is commonly referred to as common reed. The wetland grass thrives in its name sake - wetlands or low areas - but can also establish itself in other areas as well. It is commonly found along roadsides in ditches, in retention ponds and bioswales, along the edges of ponds, rivers and lakes, and will completely infiltrate a wetland, quickly becoming a monoculture - a single species. It is considered invasive as it outcompetes all other plants and displaces wildlife as it becomes the 'top-plant,' at least in numbers, in a given area.

In the fall, phragmites begins to turn from its summer green, to yellow and ultimately tan as shown in the photo below. Currently, the plants are brown and the seed heads are in their full fluffiness. 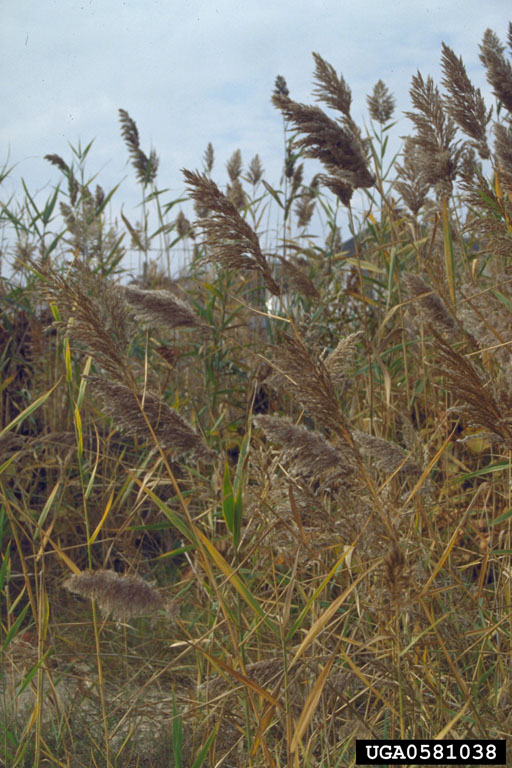 Phragmites can grow very tall, with some references stating that plants can top out at 20 feet. If the plant's presence wasn't bad enough, it can obstruct views of water and nature, along a slew of other negative impacts that will be covered in the alert. 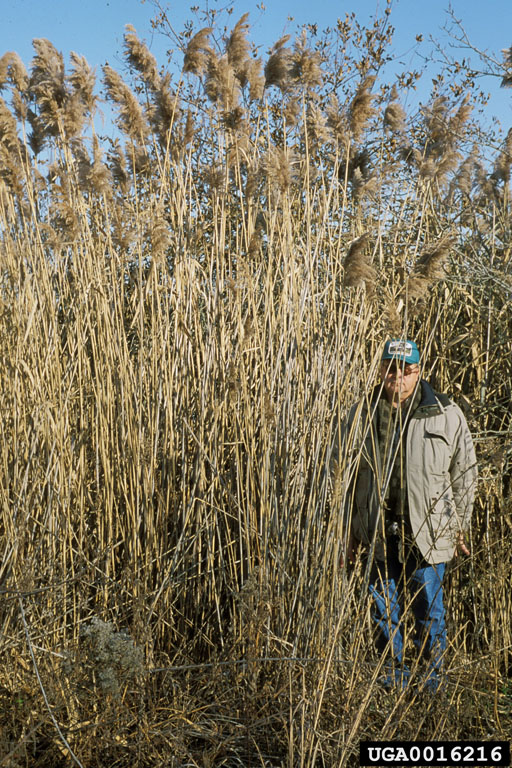 The US Fish and Wildlife describes the arrival of phragmites to the US in the early 19th century. Its orgin was likely European and was first noticed in coastal ports primarily in the eastern states. The rapid spread in the 20th century was likely tied transportation including roads, highways and railways; habitat disturbances; development of shorelines; pollution; and eutrophication.

Phragmites takes advantage of disturbed sites and can also be an indicator of a wetland system that is out of balance. Once it finds its way onto a given site, it begins to spread and the establishment of what often is a monoculture quickly follows. The plant can spread easily by seeds and rhizomes. 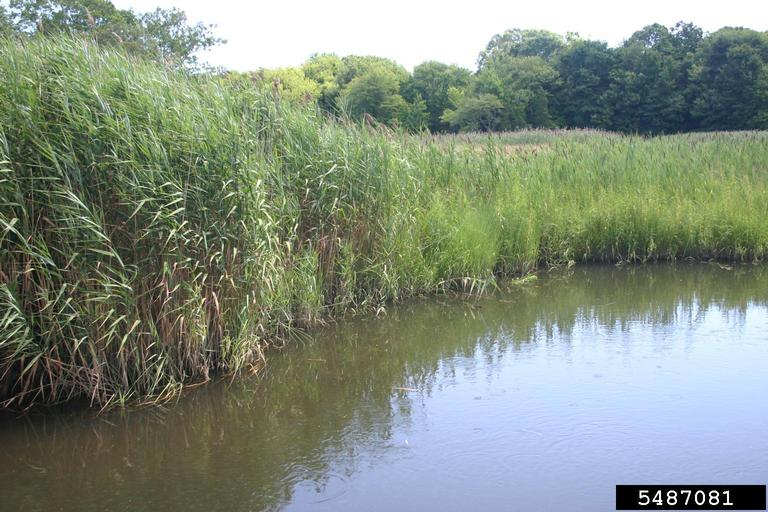 While the photograph above is a typical 'home' for this invasive plant, it can also become established in much harsher conditions as shown below. 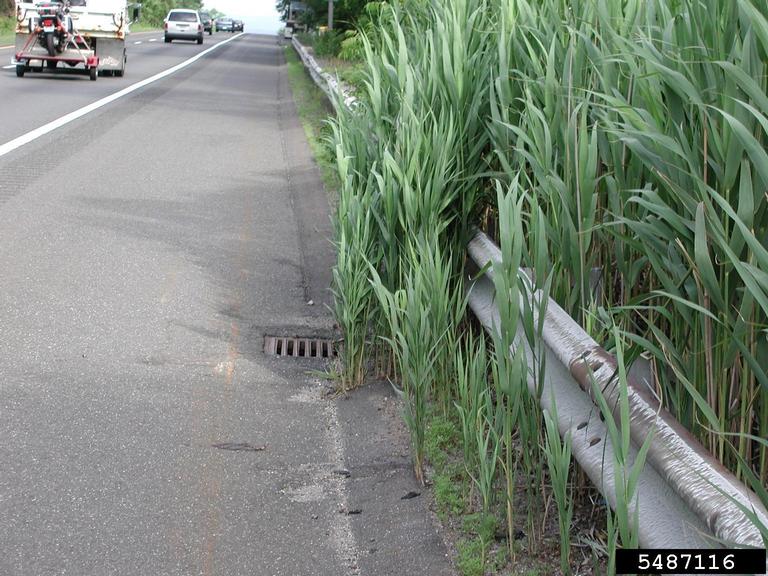 While a wet area is likely on the other side of the guardrail because of the presence of the stormwater drain in the photo, the phragmites is eagerly expanding its ground or range. This phragmites invasion, includes a highly disturbed roadside environment which includied popping up the alongside and even into the road itself. It is one tough and adaptable plant.

Other ecological impacts include:

- imparment of recreational use of wetlands and shorelands 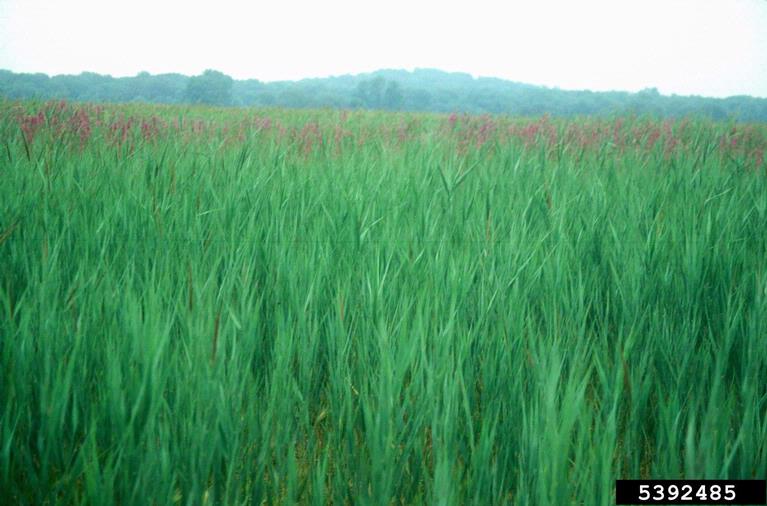 Its toughness calls for an ongoing multifacet management approach.   The first step in the successful management of phragmites includes identification - the earlier the better! The Michigan Department of Environmental Quality (MDEQ) has published a resource, A Guide to the Control and Management of Invasive Phragmites, that you might want to check out. It can be found at: http://www.uprcd.org/downloads/deqoglaisguidephragbookemail_212418_7_2.pdf 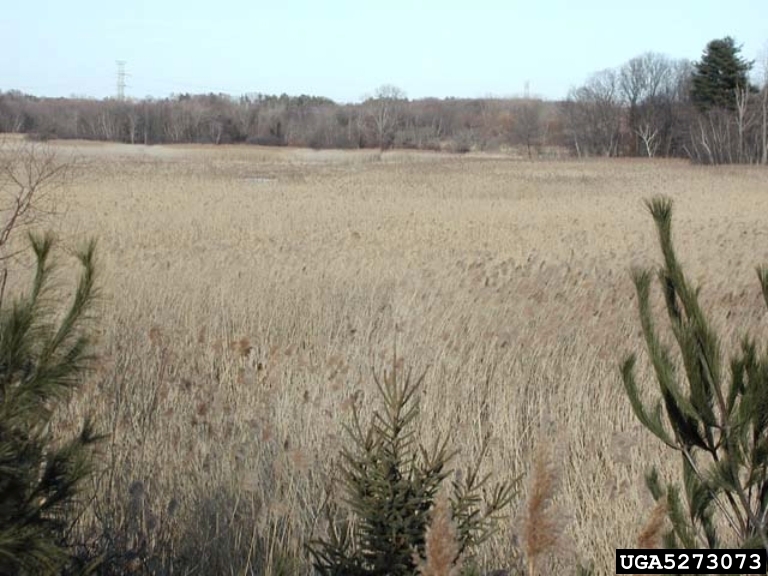 In Ohio we are also asking people to report phragmites and other invasive species on the Great Lakes Early Detection Network (GLEDN) App. For more information about the App and how you can help, check out the website at: https://apps.bugwood.org/apps/gledn/

You can also check out more information about the app at:  https://osu.zoom.us/rec/play/uJIoJeGt_DM3EteV5QSDBaR_W47oJq2s23AZ-qALzUrjWyMLNVegZLZHN7dWBA7rrJjYTg1YTuwjBfRF 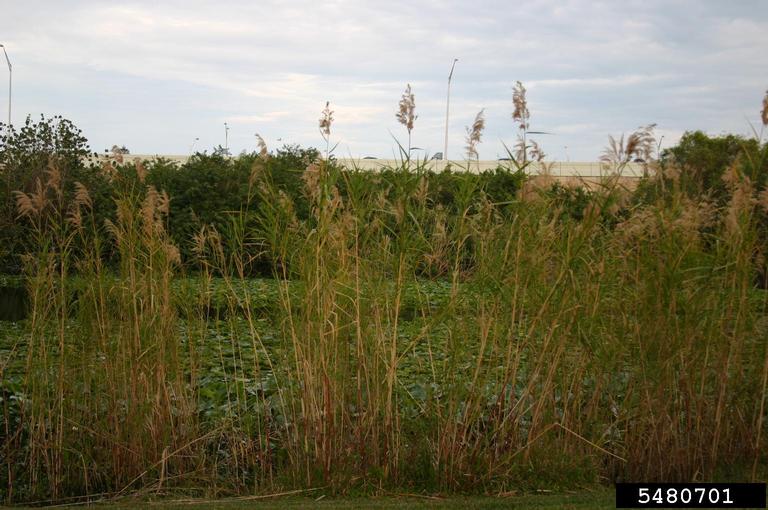