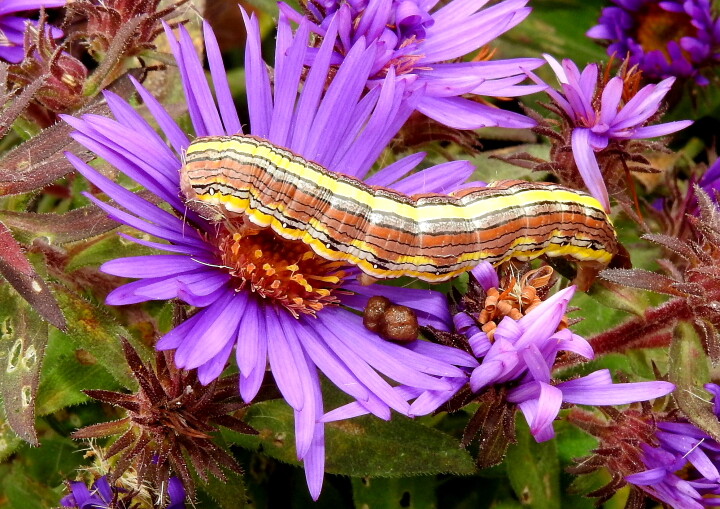 Amy Stone reported earlier this month on a yellow striped Zebra caterpillar (Melanchra picta (Harris)) (Stripes of a Different Kind - The Zebra Caterpillar, October 8, 2020). Curtis Young discovered yet another caterpillar with bright yellow stripes running down the length of its body. This one was found mowing down on the blossoms of New England asters (Symphyotrichum novae-angliae) growing in the Van Wert County Master Gardeners’ Children’s Garden in Smiley Park, Van Wert, Ohio.

BYGL reader, Molly Kenny, this post is for you. We have always encouraged readers to comment and interact with BYGL writers. Molly caught a photographic error from a previous post that has since been correct. It is a great feeling to follow up with a BYGL alert on another fall feeding caterpillar.

Although their base color is typically green, it can and does vary widely with some being tan or purple and brown. These alternate colors tend to show up in the later instars of development.

The part of the name “hooded” comes from an adult moth characteristic where the moth has a bunch of scales that project forward from the thorax over top of its head. The flight period of the moth is reported to be May through September within its range. The range of the moth is from Southern Canada through the United States east of the Rocky Mountains. Caterpillars feed through the summer into early fall. The mature caterpillar moves from its host to dig a hole in the soil where it spends the winter as a pupa inside of a tough cocoon. New adults emerge the following growing season.

The larvae feed primarily on the flowers of goldenrod (Solidago spp.) and aster (Aster spp.).

So, when you are out and about in your garden or landscape, or maybe even visiting a local park, garden or arboretum, look for these striped wonders chewing on the fall bloomers.