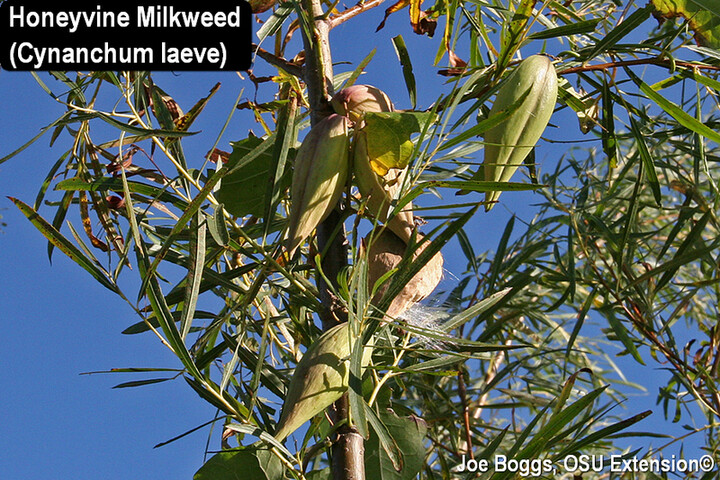 The first time I came across honeyvine milkweed (Cynanchum laeve, family Apocynaceae), I had no idea of the plant's identity.  It had milkweed-like seed pods, but they were dangling from a vine climbing high into a tree.  Thankfully for me, the vine was also covered with oleander aphids (Aphis nerii). 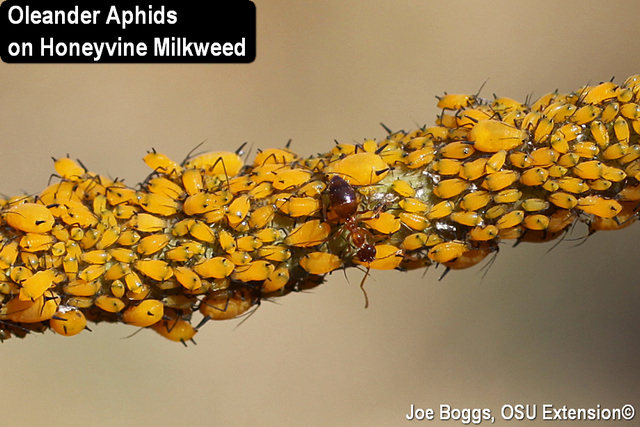 The seed pods should have been the identifying feature.  However, as with many of my plant ID challenges, a plant pest provided a helpful clue to both the true identity of the honeyvine milkweed as well as the taxonomy of this native plant.  Sadly, I still rely heavily on what's eating a plant rather than the plant's features to make a plant identification. 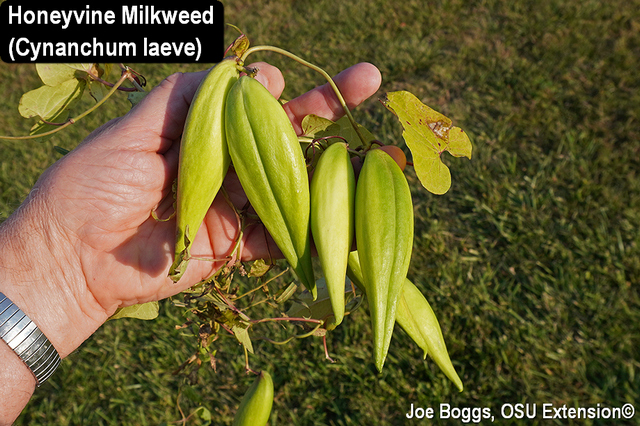 Honeyvine is common in Ohio but often mistaken for other vining plants such as various members of the bindweed/morning glory family, Convolvulaceae.   But oleander aphids don't feed on bindweeds or morning glories. 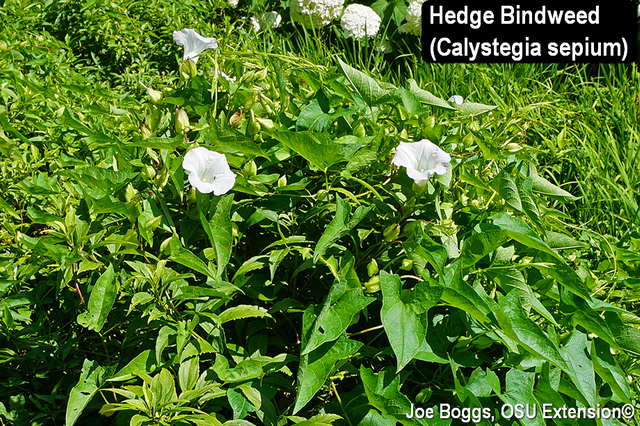 Although the non-native oleander aphid is considered a "cosmopolitan feeder" because it may be found on a wide range of plant species, the aphid confines its palate to members of the dogbane family, Apocynaceae.  Oleander (Nerium oleander) belongs to the dogbane family along with other oleander aphid hosts such as members of the genera Asclepias (milkweeds), Vinca (periwinkle), Amsonia (bluestar), Mandevilla, and of course, Apocynum (dogbane).  As I said, oleander aphids are a great teacher of taxonomy! 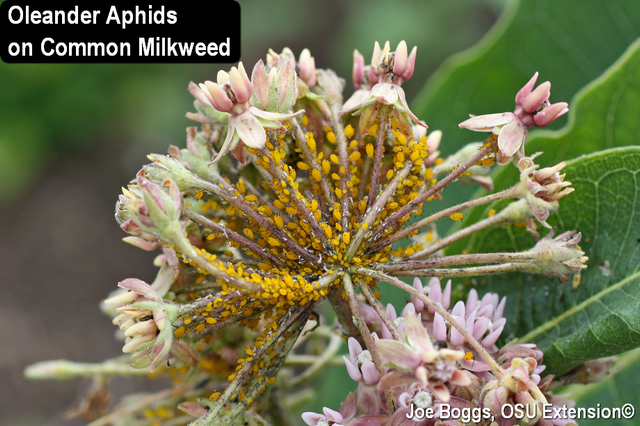 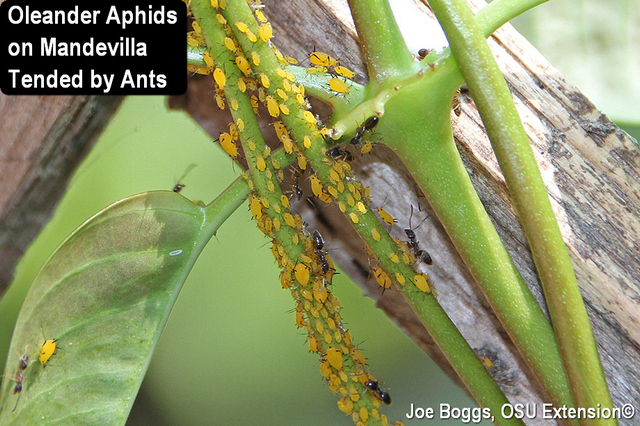 A Jekyll and Hyde Native Plant

Honeyvine milkweed has dark green, deep-veined leaves that are somewhat heart-shaped and opposite on the vining stem.  Leaf size varies from 3 – 7 inches long.  As noted earlier, honeyvine milkweed is sometimes mistaken for bindweeds or morning glories because of the leaf shape and vining nature of the plant. 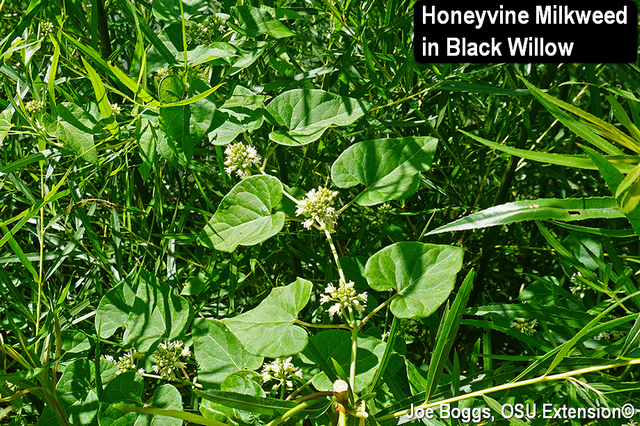 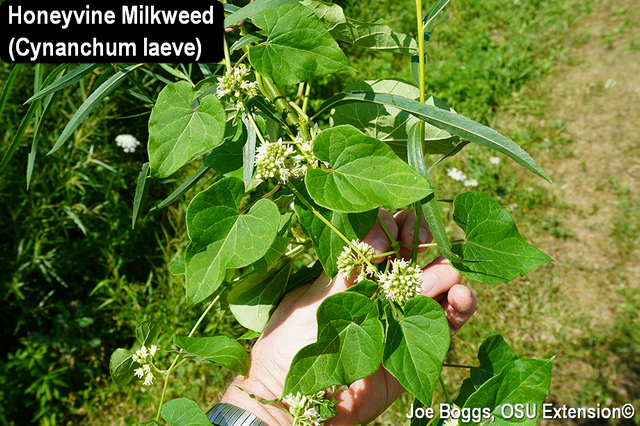 The flowers, seed pods, and of course the appearance of oleander aphids are solid telltale features separating honeyvine milkweed from members of the Convolvulaceae family.  Members of the morning glory family sport showy bell-shaped flowers.  Honeyvine milkweed has small white flowers that grow in clusters. 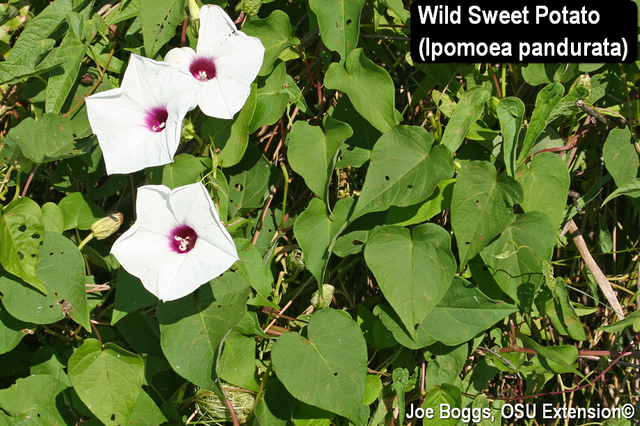 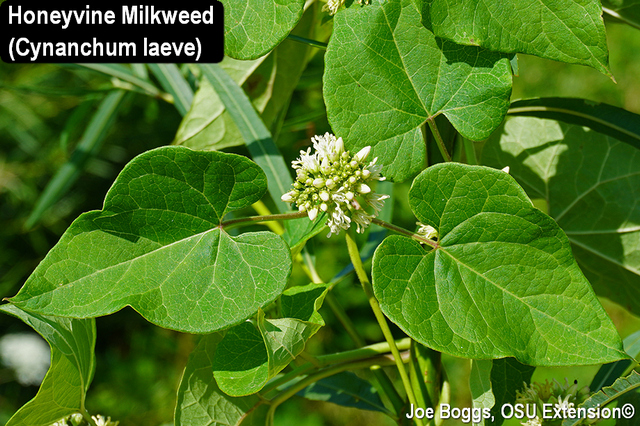 The elongated seed pods that are currently dangling from honeyvine milkweed strongly resemble those found on common milkweed (A. syriaca).  This family feature firmly separates this plant from any member of the bindweed/morning glory family. 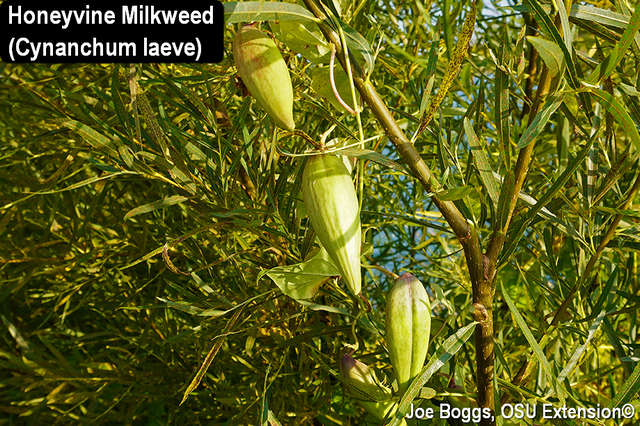 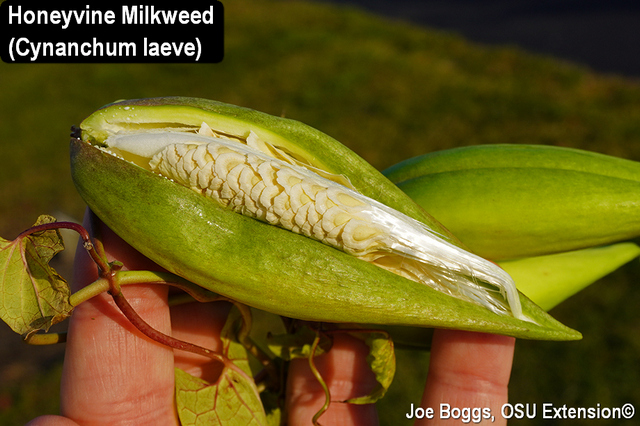 Of course, as with many plant species, the shape and size of the seed pods may vary within the C. laeve species.  I came across honeyvine milkweed several years ago that produced short, fat seed pods.  I shared pictures with Dan Boone (Cincinnati) who is an expert on identifying our native plants and he believes the pods represent variability within the species. 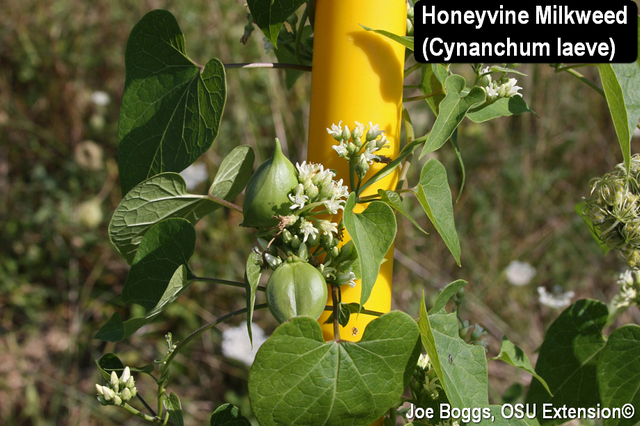 Indeed, after reviewing images that I've taken of C. laeve in the past, I came across some pictures of a mature short, fat seed pod collected from a plant that also had long, tapered seed pods.  The image is below. 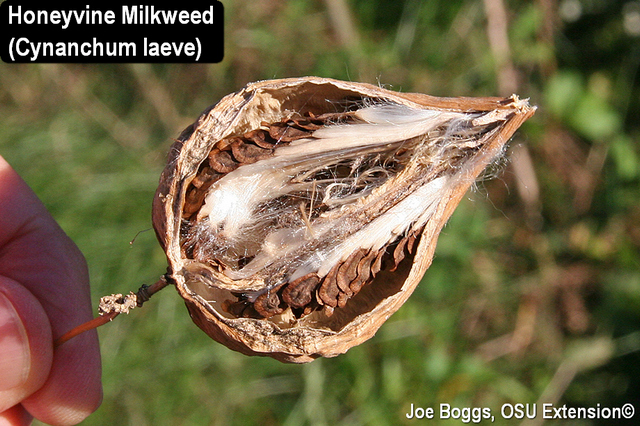 Honeyvine milkweed will support the development of monarch butterfly (Danaus plexippus) caterpillars.  However, there's some evidence the nutrient value may not be as favorable as with the Asclepias species.  Still, you will find online references that include this plant as a food source for monarchs.

Before you include honeyvine milkweed in a "monarch garden," keep in mind there are also many reports that this perennial plant is an aggressive climber often covering fences, small trees, and shrubs.  I've observed the vines climbing on and within various landscape plants in southwest Ohio, but I've never found honeyvine covering plants as described in various reports.  Of course, this doesn't mean concerns over honeyvine milkweed misbehaving are not valid. 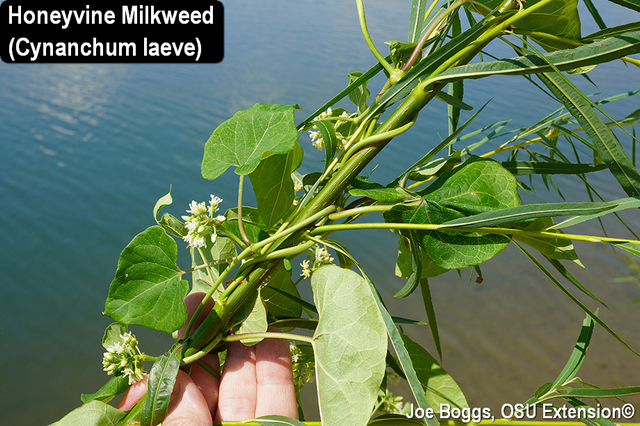 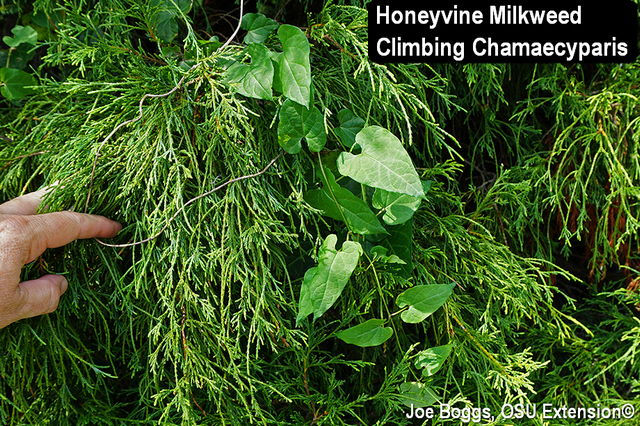 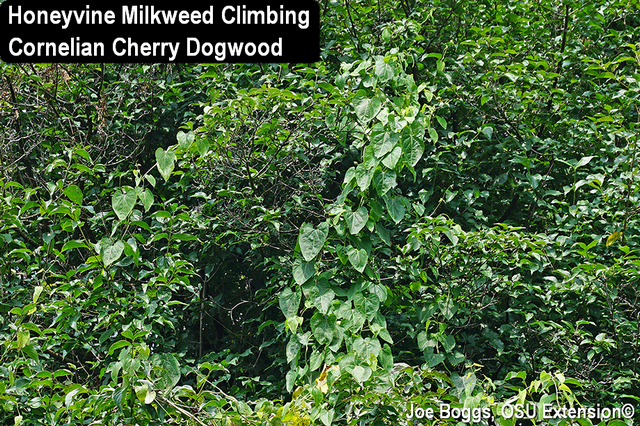 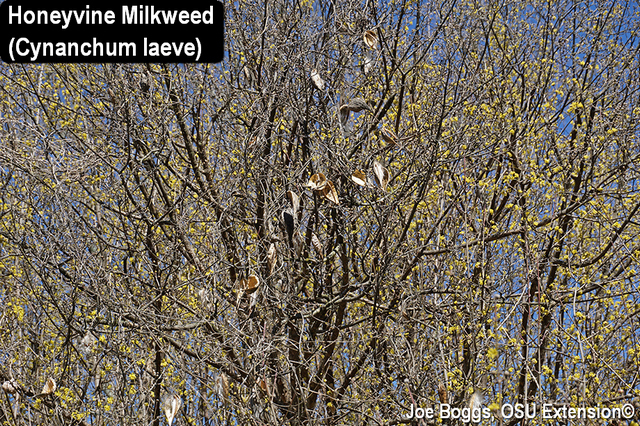 Honeyvine milkweed can arise from roots or seeds; it's a prolific seed producer.  Once seeds germinate, the plants quickly produce deep vertical taproots along with fibrous lateral roots.  Both will easily break off if plants are pulled.  A saying that I first heard from Bill Fountain (University of Kentucky, Horticulture) applies to this management problem:  "if you pull the plants, all of its relatives show up for the funeral."

One possible limiting factor in the unchecked spread of honeyvine is its soil requirements.  Plants do best in fertile, moist soil.  I've most often found honeyvine growing along lake or stream banks as well as in woods with consistently wet soils.

Several Extension publications from other states list honeyvine milkweed as a serious agricultural weed.  You should certainly keep an eye on this plant if you find it in your landscape; perhaps from a distance, so you don't get covered over.