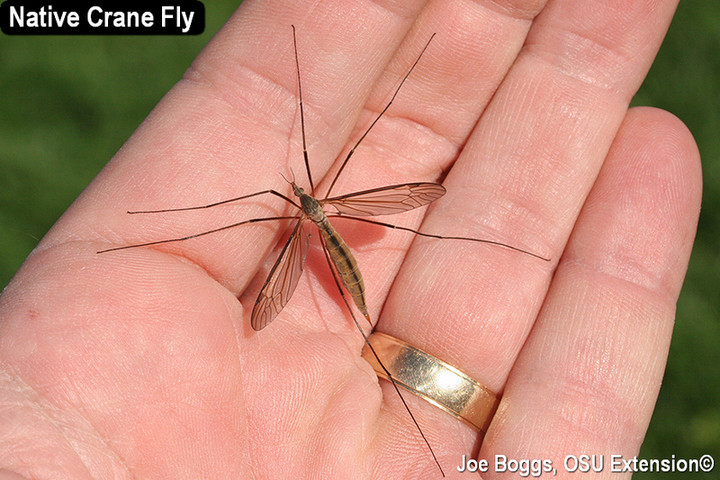 Swarms of crane flies (order Diptera, family Tipulidae) are cruising lawns during the day and buzzing porch lights at night throughout much of Ohio.  Although they look like giant, mutant mosquitoes, crane flies do not possess mosquito-like piercing-sucking mouthparts, so they do not bite.  In fact, the adults are relatively short-lived and they don't feed.

However, hundreds of long-legged crane flies billowing up from lawns can startle homeowners and be a real nuisance.  They are also drawn to porch lights at night and have a habit of blundering into homes. 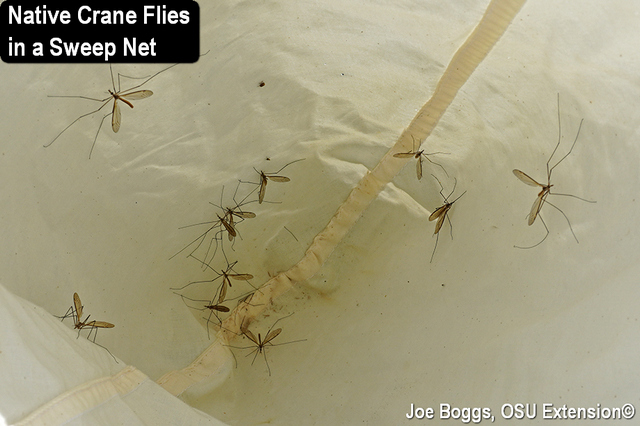 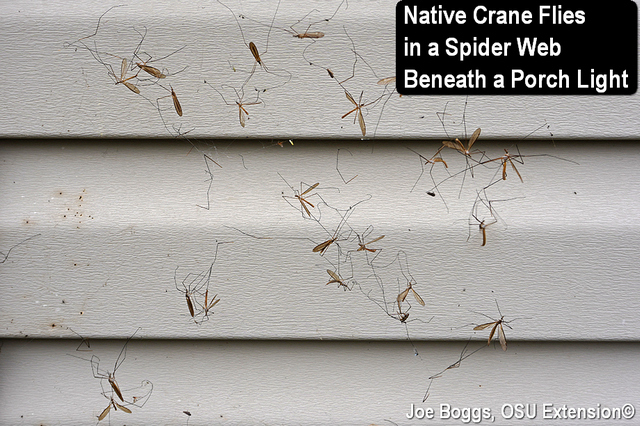 Indeed, crane flies were a topic of several reports during yesterday's BYGL Zoom Inservice. Dave Shetlar (OSU Entomology, Emeritus) noted that he had been contacted by the news media in Columbus to provide insights into these unusual dipteran interlopers.  Curtis Young (OSU Extension, Van Wert County) showed some amazing video of crane flies cavorting on his home lawn. 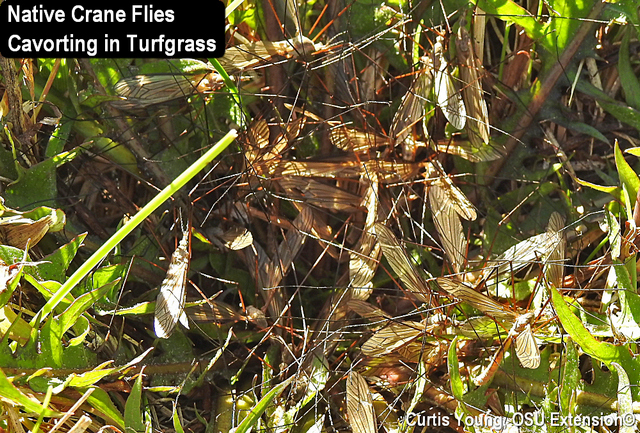 The larvae (= maggots) of crane flies are called "leatherjackets" because of their tough, leathery exoskeleton.  The leatherjackets of most crane fly species feed on decaying organic matter in the soil, and they especially appreciate continuously moist areas. 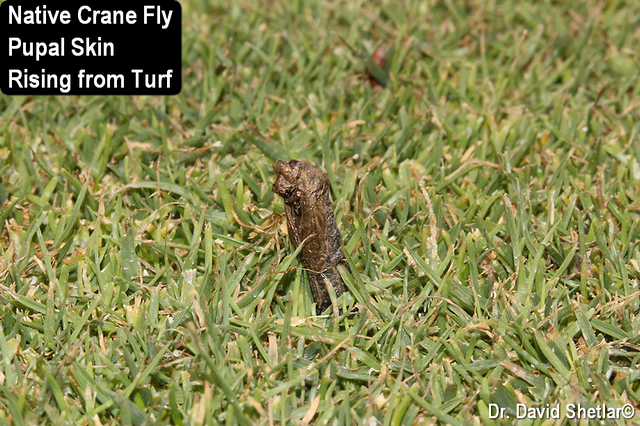 Like the adults, the leatherjackets may occasionally appear en masse spilling onto driveways or sidewalks.  Such a dramatic appearance may signal that the lawn has a thatch problem since the larvae are particularly fond of decaying thatch.  Keep in mind that thatch may be produced by non-preferred grasses such as rough bluegrass (Poa trivialis) which is a notorious thatch producer.

Adults usually appear in Ohio landscapes during two peak periods.  Some species produce a heavy adult emergence in the spring while other species generate adults in the fall.  Dave noted that the high populations in Ohio this fall are a product of several environmental "perfect storms" beginning after females used their sharp ovipositors to lay eggs in the soil last fall.

Crane fly eggs, as well as the leatherjackets, are subject to dehydration.  High soil moisture levels throughout the winter and the spring provided perfect conditions for the survival of the eggs and immatures.  The leatherjackets dodged the dehydration bullet by going into diapause during the late-summer drought that has plagued much of Ohio.  Diapause is not the same as hibernation.  It's a deep physiological stasis used by some insects to survive calamitous environmental challenges. 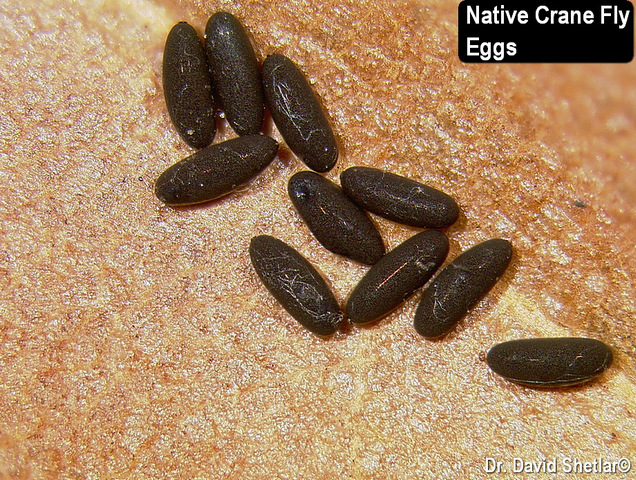 Although we are experiencing a bumper crop of crane flies this fall, their activity will eventually subside just as dramatically as their sudden voluminous appearance.  Adults do not feed, so they must get things over with quickly.  Mating and egg-laying occur over about 3 days after adult emergence.  The adults may live on for another 7 – 10 days; however, they are living on borrowed time. 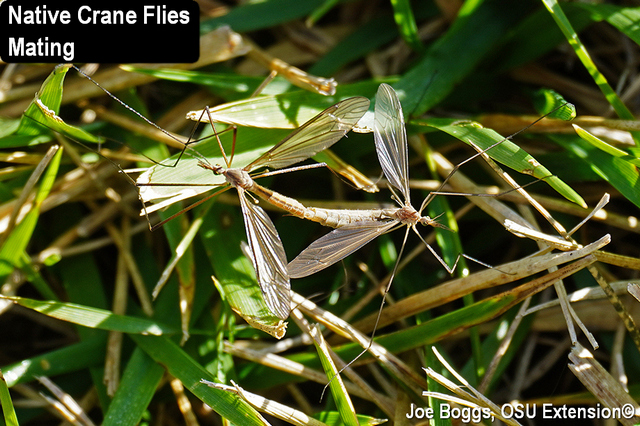 Our native crane flies cause no damage to the turfgrass or other landscape plants.  They serve a valuable function as the "clean-up crew" converting large pieces of organic matter into smaller particles on the way to enriching the soil.  Our native crane flies are considered beneficial insects; nuisance behavior aside. 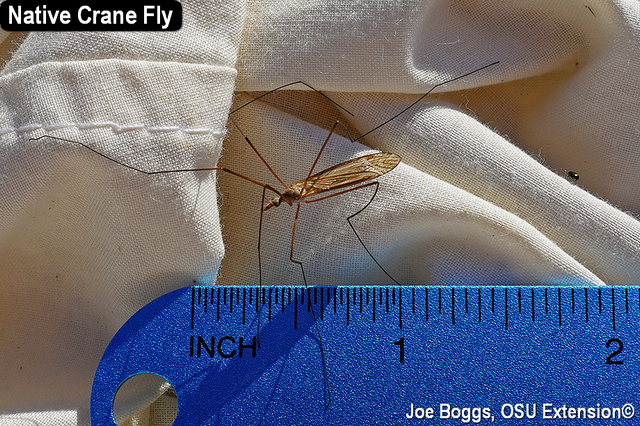 The same cannot be said for two non-native crane fly species that have found their way into North America.  The common European crane fly (Tipula paludosa) and marsh crane fly (T. oleracea) were accidentally introduced from Europe a couple of decades ago.  However, their exact distribution across North America, including Ohio, remains fluid.

The leatherjackets of these non-natives feed on the crowns and blades of living grass plants causing serious damage, particularly to turfgrass on golf course tees and greens.  The symptoms may mimic black cutworm (Agrotis ipsilon) damage requiring close inspection.

It's important to identify exactly which crane fly is billowing from the turfgrass given the destructive nature of the non-native species.  Unfortunately, the two non-native members of the Tipula genus are about the same size and have exactly the same body plan as our native members of this genus.  Fortunately, the two non-native species have a distinct white pigmentation running longitudinally on the forewings, as highlighted in the image below. 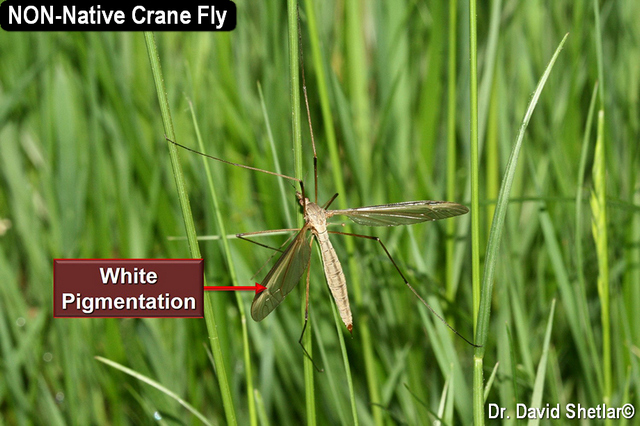 However, we would still urge that turfgrass managers send specimens to our OSU C. Wayne Ellett Plant and Pest Diagnostic Clinic (PPDC) [see hotlink below] for a confirmation particularly if unusual damage to turfgrass has been observed that cannot be explained by a definitive diagnosis.  Thus far, there remains some uncertainty as to the exact locations of the non-native crane flies in the upper Midwest, including Ohio. 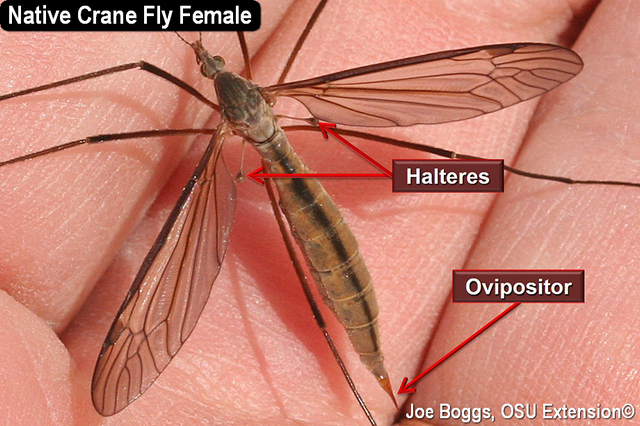 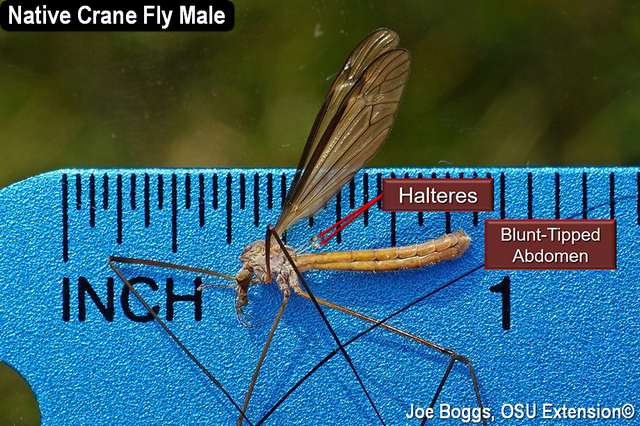