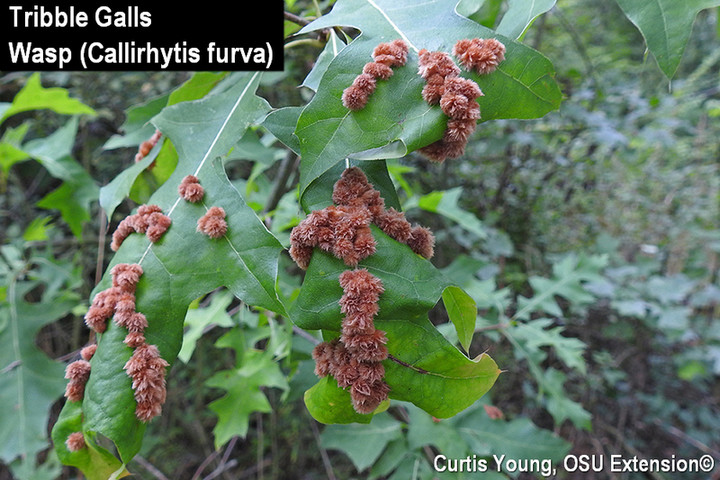 Curtis Young (OSU Extension, Van Wert County) has regaled participants of our weekly BYGL Zoom Inservice with pictures of fuzzy, deep-red leaf galls on pin oaks for a couple of weeks.  Ann Chanon (OSU Extension, Loraine County) also showed the group pictures of the galls taken on an oak in a landscape in her county.

The galls are produced under the direction of the gall-wasp, Callirhytis furva (family Cynipidae), and Curtis noted they are very common in northwest Ohio.  Sadly, they are not as common this season in southern Ohio; my part of the state. 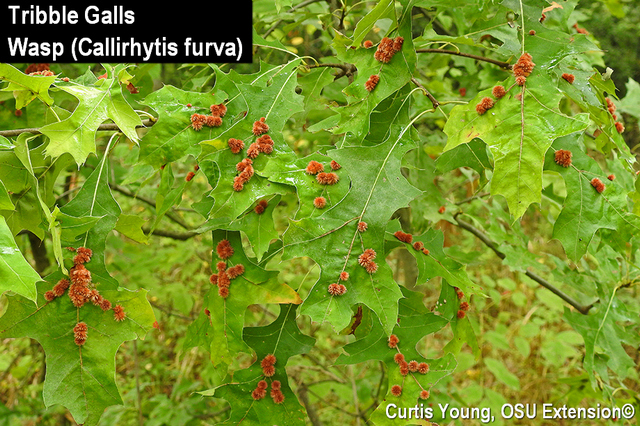 Large collections of the galls on oak leaves are eye-catching because of their alien appearance.  However, they become even more obvious once they detach from the oak leaves to rain down on sidewalks, decks, and parked cars. 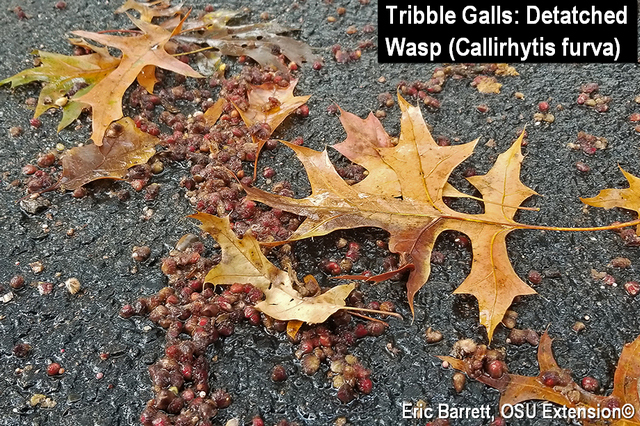 Eric Barrett (OSU Extension, Mahoning County) called this morning to report that the gall-drop has been so dramatic in northeast Ohio it's prompted a local news media interview.  The same is true in Maine.  I spoke with Jim Dill (Pest Management Specialist, Cooperative Extension, University of Maine) on the phone today and he said they are also seeing unusually high populations of these galls in Maine and their detachment has attracted the attention of the news media.

Neither the wasp nor its unusual hairy-looking gall has common names that are approved by the Entomological Society of America (ESA).  You'll find a range of common names applied to this gall online from "plush galls" to "hairy oak galls."  However, the galls bear a striking resemblance to a miniature version of Tribbles; the fictional alien species (truly) that overran the Enterprise in the 1967 Star Trek episode titled "The Trouble with Tribbles."  As a Trekkie, I've taken advantage of the ESA common name being up for grabs.

Tribble galls may occur on the upper or lower leaf surfaces of oaks in the red oak group.  They may arise singly to truly resemble their (proposed) namesake or in clusters to demonstrate what the fluffy aliens did to the Enterprise.  They detach from the leaves of their oak hosts to apparently allow the gall-making larvae direct access to the soil where they pupate before winter. 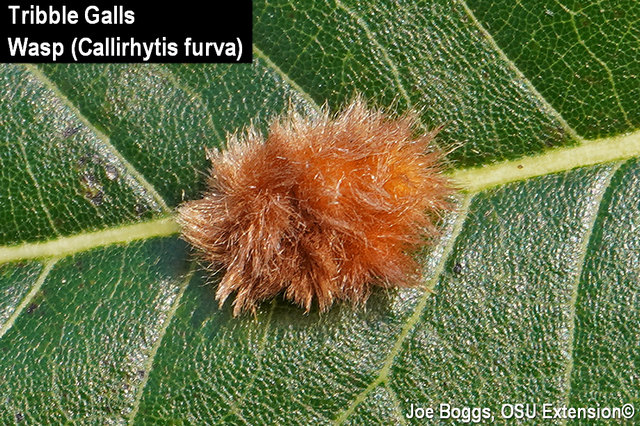 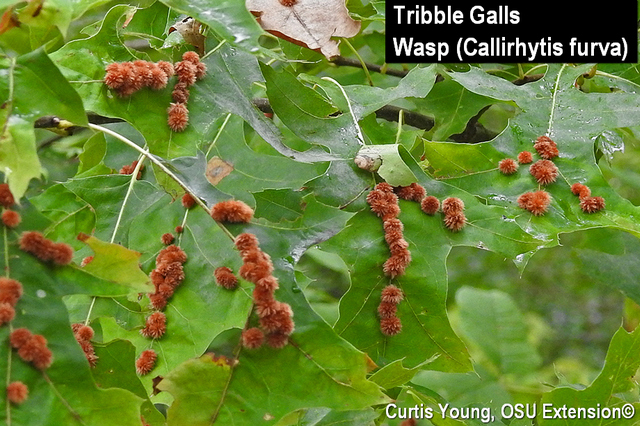 Adult female wasps emerge in the spring to mate and sip plant nectar which gives them the energy to fly to developing leaf buds where they use their ovipositors (ovi = egg; positor = deposit) to insert eggs into nascent leaf tissue.  Their ovipositors are used solely for egg-laying; they are not modified into stingers for defense.  So, these wasps can't sting.

Appreciate but Do Not Fear

The sole purpose of a plant gall is to house, protect, and nourish immature gall-makers. The vast majority of cynipid wasp galls, including tribble galls, cause no appreciable harm to the plant hosts.  In fact, plant galls are considered an important strand in the fabric of many terrestrial ecosystems.

Gall formation is a wondrous but poorly understood process.  What we know is that galls are composed entirely of plant tissue that is produced under the direction of a living gall-maker.

What is wondrous is that the gall-structure is the product of plant genes being turned on and off at just the right times by chemicals produced by the gall-maker.  The plant genes behind gall formation already exist within the plant's genome; the gall-maker has evolved a way to awaken them for its own purpose.

Thus far, no researcher has ever duplicated this interaction without the aid of an insect gall-maker.  Imagine what we could learn if we only knew what the gall-makers are actually doing.

Despite learned people recognizing and writing about plant galls, particularly oak galls, for hundreds of years, the population dynamics of most insect gall-makers also remains poorly understood.  These odd plant structures usually occur in such low numbers they're only discovered by a close examination of the host plant.

Of course, as demonstrated by the current trouble with tribbles, we occasionally see outbreaks for reasons that are not well understood.  Oddly, these outbreaks may occur over large geographical regions even though the gall-wasps are very tiny insects. 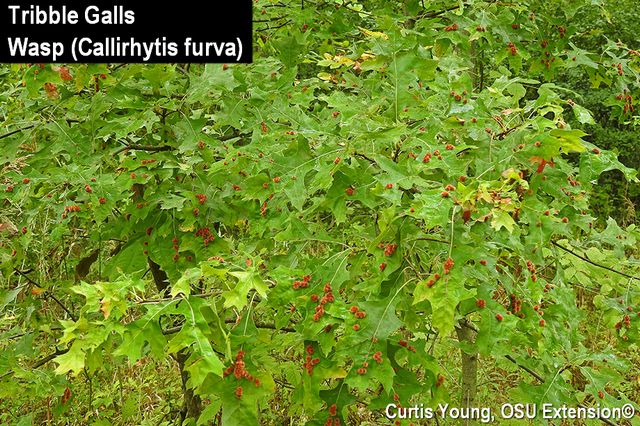 Just a mystifying, the occurrence of a particular gall usually drops to almost undetectable levels the year after an outbreak and they remain rare for many years.  It's highly unlikely the tribble galls will reappear in large numbers next season in areas where they were common this season.  In other words, we don't need to do anything to manage the galls; we just need to trust that nature will take its usual course.