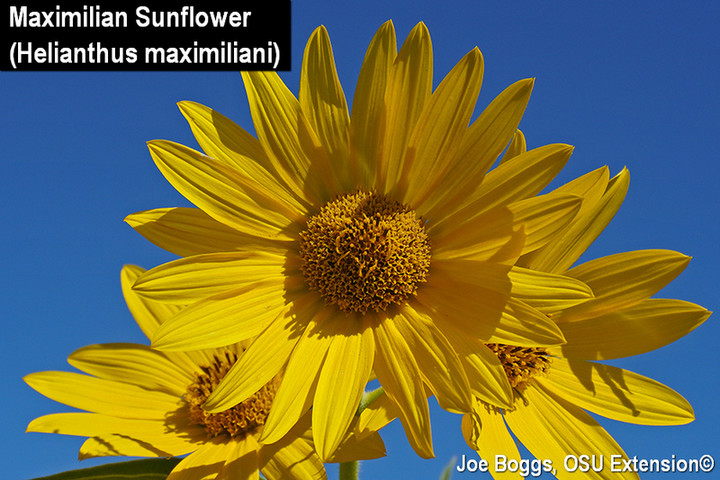 A beautiful floral display is underway in the Voice of America (VOA) Butler County MetroPark just off I-75 north of Cincinnati.  The draw for me and apparently many others is a sea of gorgeous yellow flowers running for about 1/2 mile between the park's lake and Liberty Way; a road that borders the northern edge of the park.  The display is a show-stopper! 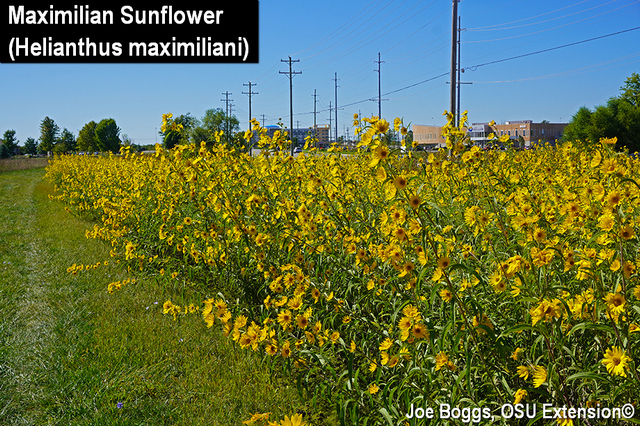 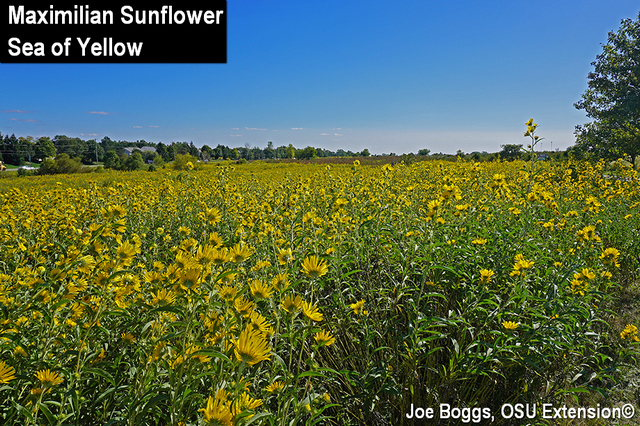 The flowering plants are Maximilian Sunflower (Helianthus maximiliani).  This native member of the Aster family (Asteraceae) evolved in the tall grass prairies of the Great Plains.  The flowers range in color across several shades of yellow from lemon yellow to canary yellow to golden yellow.  Both the common name and specific epithet for the species are named in honor of the German naturalist and New World botanical explorer Prince Maximilian of Wied-Neuwied. 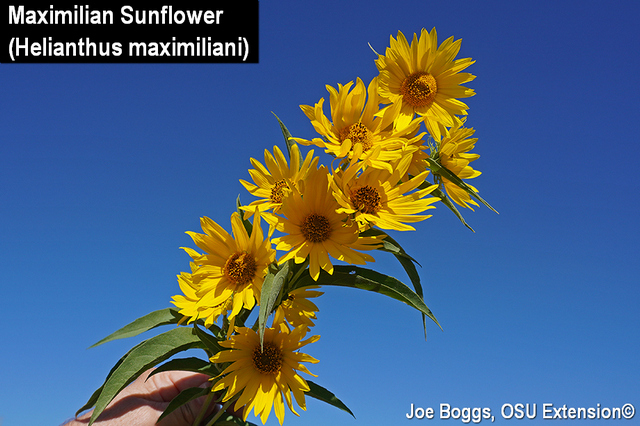 A Trip Down Sunflower Lane

I posted two back-to-back BYGL Alerts about these sunflowers on September 23, 2016.  The VOA planting was providing its first beautiful floral display that year.

My first Alert was titled, "Perennial of the Week:  Maximilian Sunflower (Helianthus maximiliani)."  I extolled the virtues of this native yellow-flowering prairie plant.  I noted that this sunflower can handle a wide range of environmental challenges including droughts and alkaline clay soils.   Plants can be successfully established from seed over a wide area and will spring forth from underground rhizomes to rise above competing plants often growing to heights of 6 - 10'. 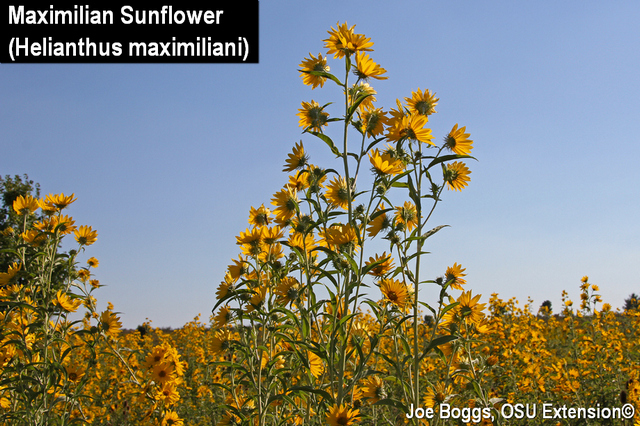 Flowers appear late in the season after the flowers of many other perennials have faded away.  The flowers are highly attractive to pollinators. 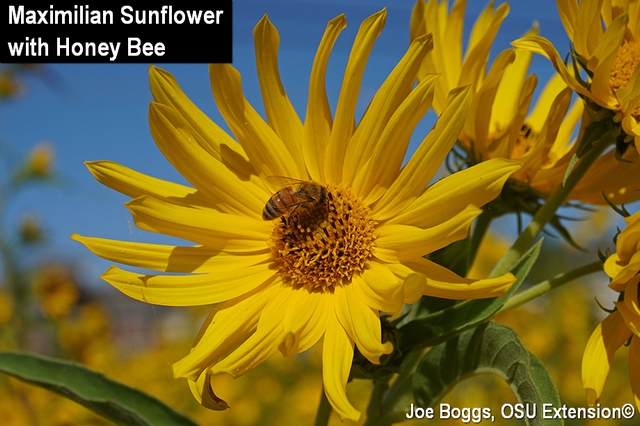 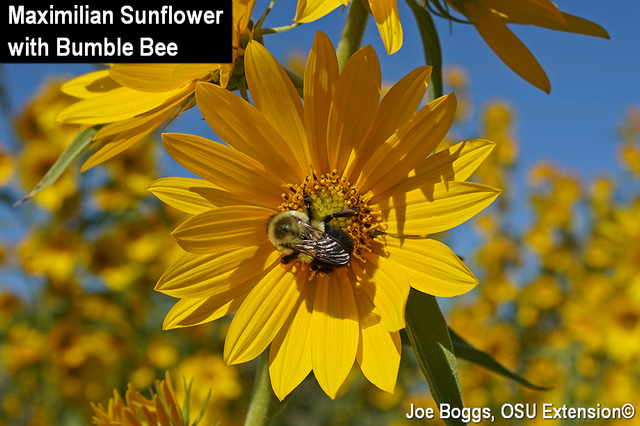 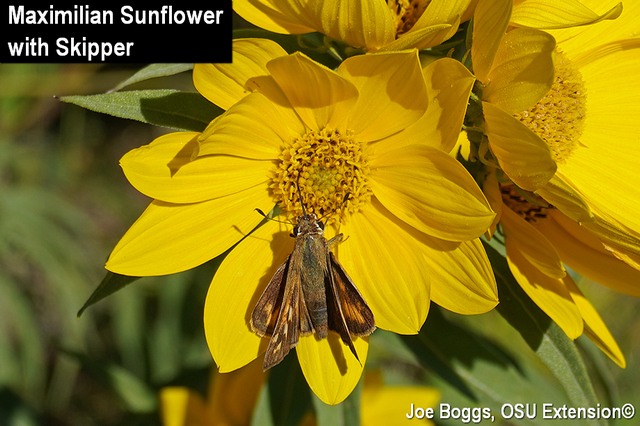 All of these points are true; however, I may have gone a bit too far by declaring that Maximilians had become one of my top favorite plants for prairie plantings and naturalized areas.  The posting quickly drew fire from a BYGL reader who counter-pointed that Maximilian sunflower was a very poor choice for naturalized areas and prairie plantings in Ohio.

"Those are my principles, and if you don't like them ... well, I have others." – Groucho Marx

Later that day, I posted the second BYGL Alert titled, "Weed of the Week:  Maximilian Sunflower (Helianthus maximiliani)."  It was a response to the BYGL reader's perspectives.

The reader noted that while the Maximilian Sunflower is native to the U.S., it's not native to Ohio.  It behaves as a mild-mannered Dr. Jekyll in the dry regions of the Great Plains where it is native.

However, abundant rainfall (not lately!) in Ohio can turn the Maximilian sunflower into an evil Mr. Hyde causing it to dominate prairie plantings.  Apparently, the plants are highly allelopathic so they don't fight fair in suppressing surrounding plants.  If fact, the Maximilian sunflower in the VOA MetroPark was part of a mix of prairie plant seed sown in 2013 and it has indeed risen to a place of dominance. 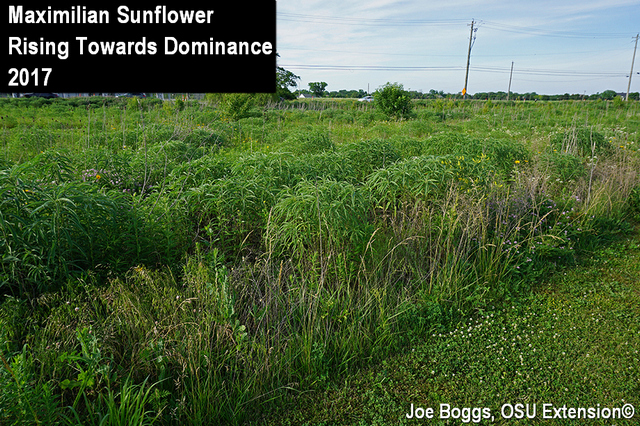 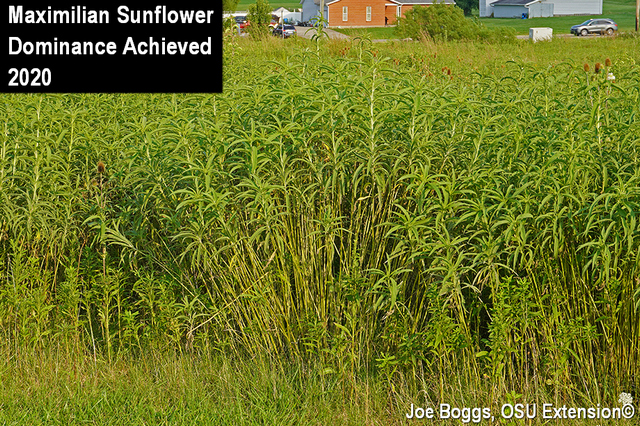 However, I've observed that goldenrods (Solidago spp.) seem to be able to hold their own against Maximilian sunflower plants.  I do not recall that Solidago was included in the original prairie seed mix. 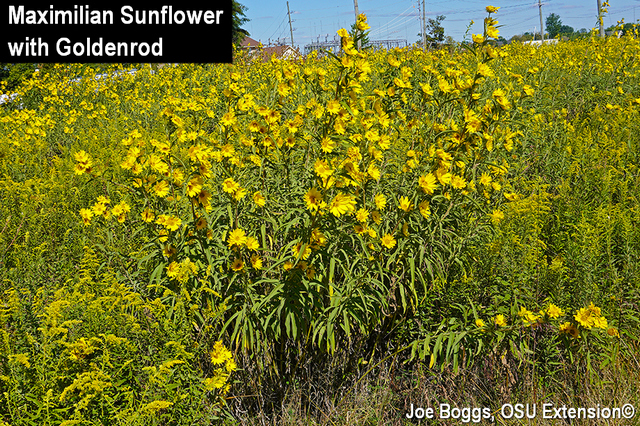 I'm tempted to employ a little revisionist history to claim the weedy version of the Maximilian sunflower was named for Ferdinand Maximilian Joseph who is perhaps better known as Maximilian I, Emperor of Mexico.  Maximilian was an Austrian archduke and was well behaved in his native habitat.  However, when Napoleon III planted him in Mexico, the non-native Maximilian took over in 1864 as the first emperor of the Second Mexican Empire.  He went out with a blast which ended his short reign in 1867.

Don't throw the baby out with the bathwater (German proverb)

Indeed, the Maximilian sunflower does not play well with others.  It isn't a good choice if the goal is to have a prairie planting of mixed species.  The reader who responded to my BYGL Alerts recommended using some better behaving sunflowers including Sawtooth Sunflower (H. grosseserratus); Giant Sunflower (H. giganteus); or the lower growing Downy or Ashy Sunflower (H. mollis).

However, the Maximilian sunflower may be a good choice if the goal is to have a low-maintenance perennial flower display that literally stops traffic.  Equally important, the plants perform well over a wide range of environmental insults while at the same time suppressing other interlopers (e.g. weeds). 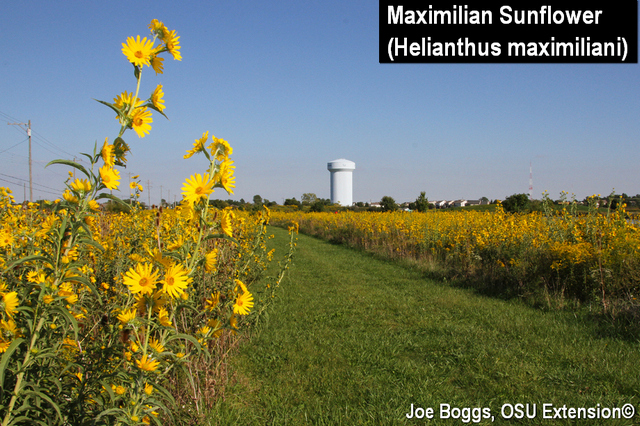 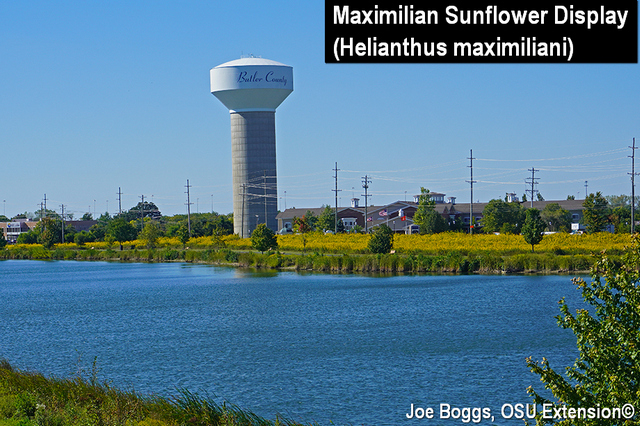 Over the years, I've observed three things about Maximilian sunflower.  First, people like them; I wasn't the only one taking pictures during my recent visit to the VOA MetroPark.  Other park visitors told me they were enthralled by the sea of yellow and thrilled with what the park had done. 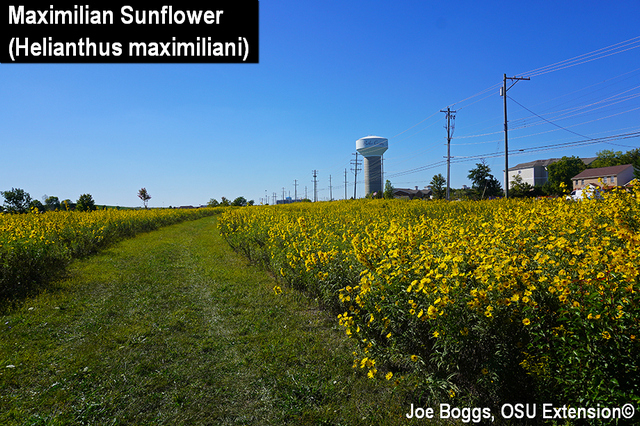 Second, the ability of Maximilian sunflowers to suppress other plants has an upside.  Where the sunflowers occur in the VOA MetroPark, their dense, multi-stemmed clumps appear to limit the establishment of non-native nasties including poison hemlock (Conium maculatum), wild parsnip (Pastinaca sativa), Canada thistle (Cirsium arvense), and teasels (Dipsacus spp.).  These invasives have established dense colonies short distances from where the sunflowers dominate the landscape and when they go head-to-head, the sunflowers win. 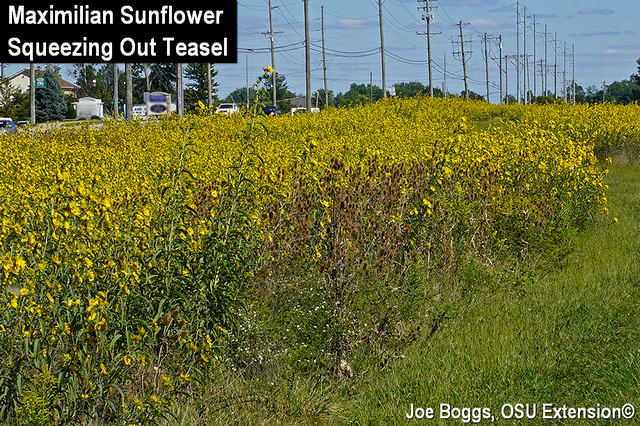 Finally, Maximilian sunflowers do not appear to be invasive.  I have not found plants popping up where they weren't seeded in 2013.  Of course, this is just an observation.

The bottom line is that while Maximilian sunflower may not deserve to be honored as a perennial of the week, it should not be relegated to the plant trash heap by being presented as a weed of the week.  In reality, this Great Plains native falls somewhere in the middle of the good/bad plant spectrum for Ohio.

Maximilian sunflower may not be a good plant for prairie or naturalized plantings.  However, it's a great plant for a massed floral display in Ohio landscapes which is certainly the perspective I heard from fellow visitors to the VOA MetroPark.