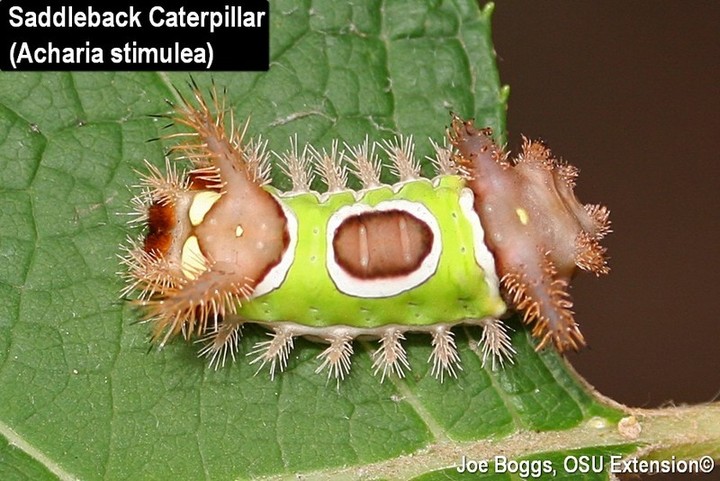 The caterpillars of many species of moths and butterflies (family Lepidoptera) become fully mature in the fall and their size makes them evident.  The vast majority of the caterpillars are harmless; even most of those that are cloaked in hairs.  In fact, the name "caterpillar" is derived from the Latin, catta pilosa, meaning "hairy cat." 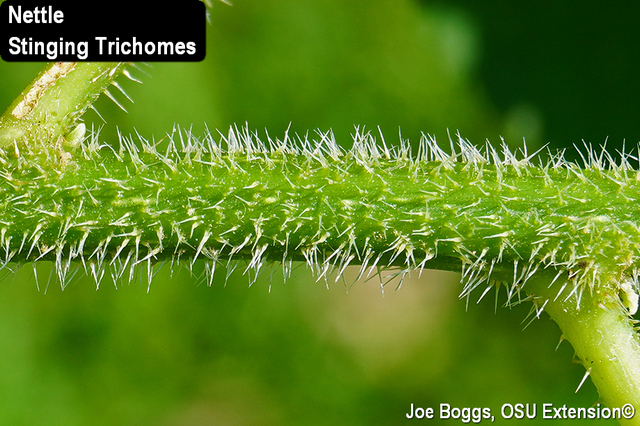 Indeed, the hairs on nettles (family Urticaceae), which are called stinging trichomes, provide a good model for the venom injecting mechanism used by some of the more serious urticating structures found on caterpillars.  As with many creatures in Nature (e.g. crocodilians, mamba snakes, grizzly bears, etc.); these caterpillars should not be handled.

Envenomation by lepidopteran caterpillars is called erucism or "caterpillar dermatitis."  In general, caterpillar urticating hairs may be divided into two groups:  long, flexible hairs; or stout bristles.  These two groups can be further divided into hairs or bristles that puncture the skin and break off to cause mechanical injury or hairs and bristles that puncture the skin and inject venom (envenomating hairs/bristles).

The "slug caterpillar moth" family, Limacodidae, includes some of Nature's most venomous caterpillars. These unusual moth caterpillars don't actually look like slugs (order Gastropoda); they are so-named because of the way they move.

The thoracic legs on a slug caterpillar are shortened to almost nonexistence and their prolegs are condensed to simple suction cup-like structures.  The lack of obvious legs makes it appear that these unusual caterpillars are creeping along on their stomachs like a gastropod (gastro = stomach; poda = foot). 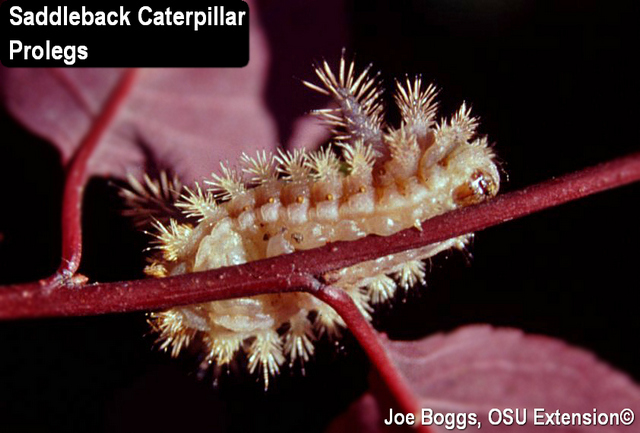 The Saddleback Caterpillar (Acharia stimulea) is one of the most notorious limacodid slug caterpillars found in Ohio.  The caterpillars are capable of launching a two-pronged defense response.  All of its stout urticating bristles may break-off to remain embedded in their assailant.  Some are envenomating bristles and they contain two types of venoms:  vesicating (blistering) and hemolytic which breaks down red blood cells.

Stings from these saddleback hairs are intensely painful and are described by hapless victims as sharp and burning.  The pain may last for a long time and often spreads over a large area.  Although saddleback stings are not generally life-threatening, it is best to seek medical attention.  As with bee and wasp stings, some people are particularly sensitive to the saddleback venom.  The caterpillars feed on a wide range of deciduous trees, shrubs, and vines from grapes to viburnums to maples.  Saddlebacks and other slug caterpillars are often targeted by parasitoids wasps with wasp cocoons sprouting from the back of the caterpillar. 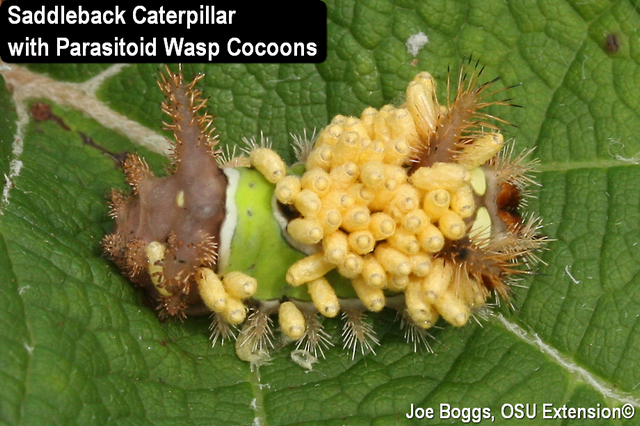 The deceptively named Smaller Parasa (Parasa chloris) is another slug caterpillar found in our state that should be avoided.  It packs a serious venomous punch that's far from small.  Their envenomating bristles remain almost hidden from view until needed for the caterpillar's defense.  If disturbed, the retractable structures bristling with bristles pop out to ward off potential predators or intransigent entomologists.  The caterpillars feed on deciduous woody trees and shrubs including apple, dogwoods, elms, and oaks. 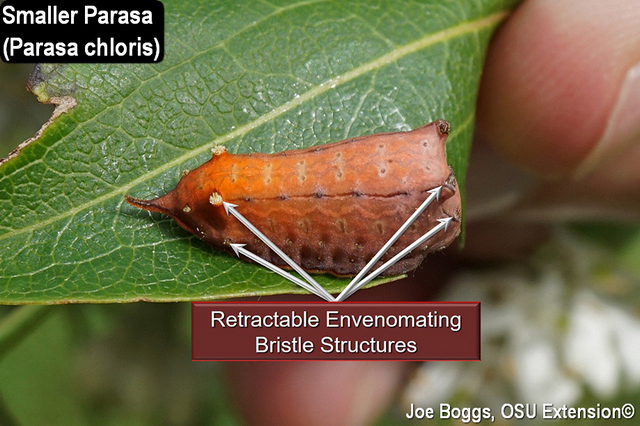 The venomous armaments that ring the flattened Crowned Slug (Isa textula) from stem to stern are clearly on display.  The caterpillars feed on the leaves of deciduous trees including beech, cherry, elm, maple, and oak.  Unfortunately, the crowned slug's suction-cup prolegs aren't always effective in keeping the caterpillars stuck to the leaves of their hosts.  The caterpillars are notorious for dropping onto unsuspecting brush-busting hikers.  The pain from envenomation is described as being similar to a yellowjacket sting. 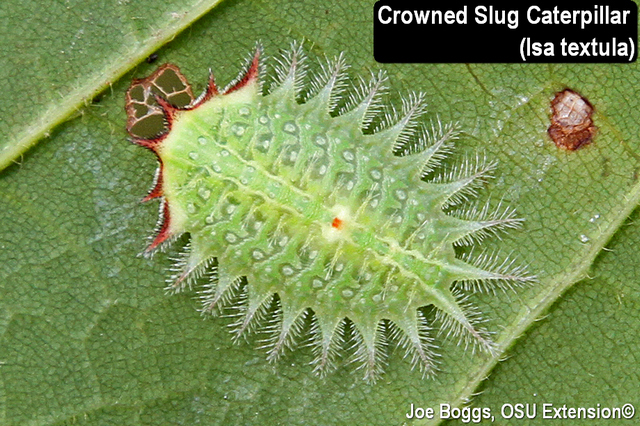 Hag Moths (Prolimacodes badia) produce another limacodid slug caterpillar commonly found in Ohio.  The caterpillars are called Monkey Slugs (one of my favorite common names) and may be found feeding on a wide range of forest trees and shrubs including birch, oaks, and willows.  The monkey slug caterpillars look like a piece of leaf debris; albeit a very dangerous piece of debris. 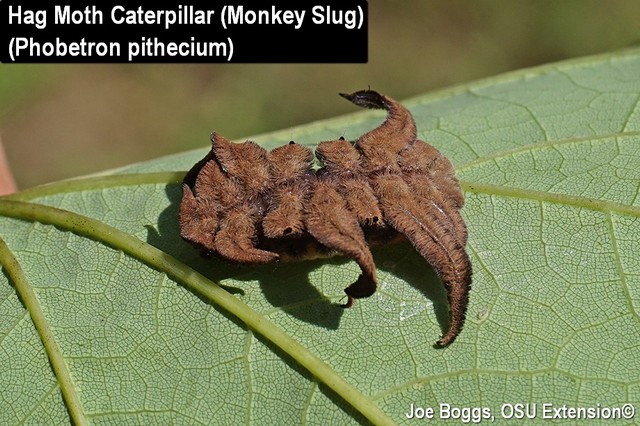 Limacodid slug caterpillars aren't the only venomous moth caterpillars found in Ohio that shouldn't be handled.  Several species that belong to the family Megalopygidae (flannel moths) can also deliver a painful sting including the White Flannel Moth (Norape ovina) caterpillar which is covered in spines and hairs and the Black-Waved Flannel Moth (Lagoa crispata) caterpillar with early instars that look like a "living Q-Tip." 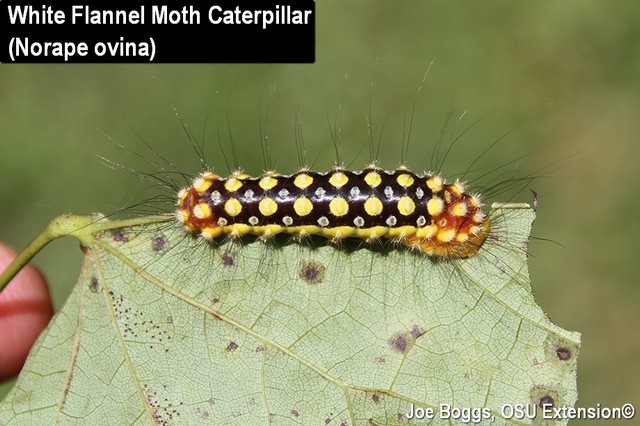 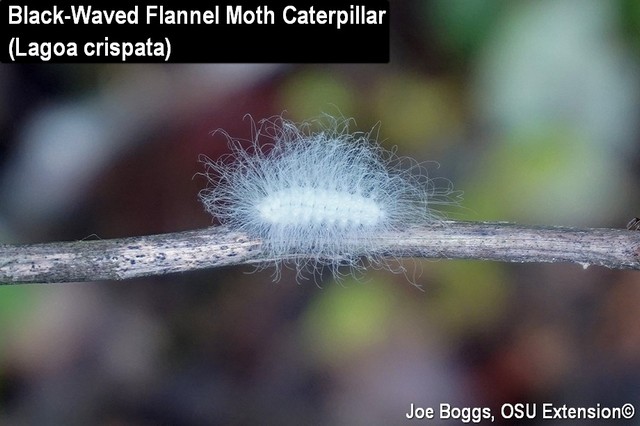 The Io Moth (Automeris io) belongs to the so-called silkworm moth family, Saturniidae.  The caterpillars are covered in venomous spines that penetrate the skin and break off to release the venom.  It's speculated that the broken spines produce a two-pronged reaction.  The chitin may elicit an inflammatory, itchy, immune response while the venom does other damage.  However, the venom of this caterpillar has not been well studied.  Regardless, close contact with these caterpillars has been described as feeling like being stung by a bee followed by itchy welts. 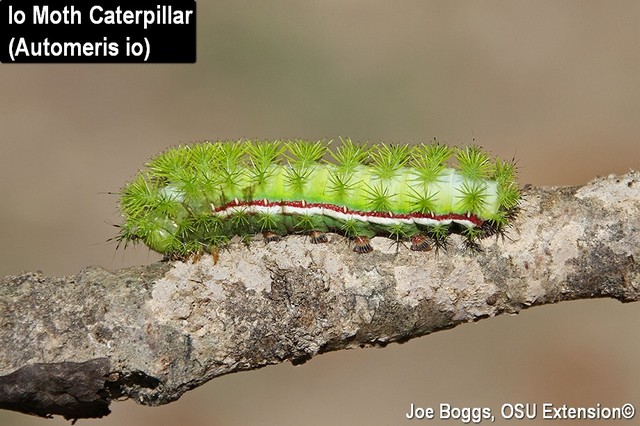 Although the silkworm moth family includes some of the most venomous caterpillars found in the world, it also includes many pretenders.  A good example is the caterpillar stage of the Regal Moth (Citheronia regalis) which is called the Hickory Horned Devil.  This is one of the rare instances where the Entomological Society of America has approved common names for both the moth and the caterpillar. 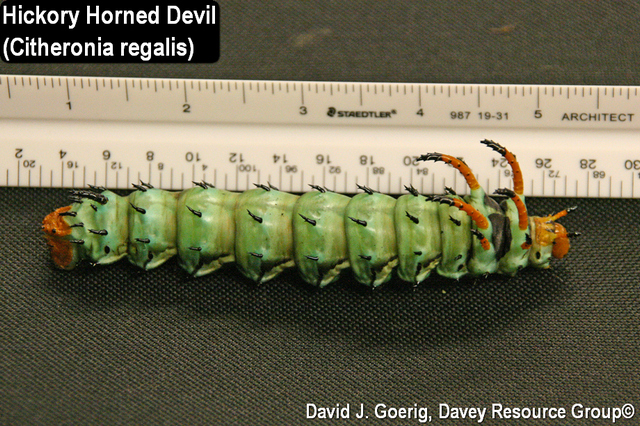 The common name for the caterpillar comes from its preferred host and pugnacious behavior.  When disturbed, the hickory horned devil whips its head and thorax around giving the convincing impression that it is trying to impale the offender with its scary-looking non-venomous spines.  The caterpillar cannot cause any real damage, but not for the lack of trying.  They have great entertainment value! 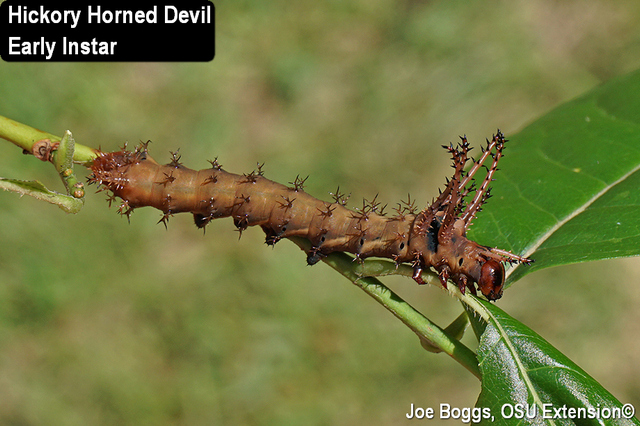 Not all caterpillars armed with defensive hairs are hazardous to all people.  Tussock moth caterpillars (family Erebidae, subfamily Lymantriinae) can have both long, flexible hairs and stout non-venomous bristles.  However, the effects may be enhanced by a person's inherent sensitivity.  Some people have a severe allergic response to hairs that simply penetrate and break-off.  They may suffer extensive rashes and localized swelling causing them to believe they have encountered envenomating hairs when they have not. 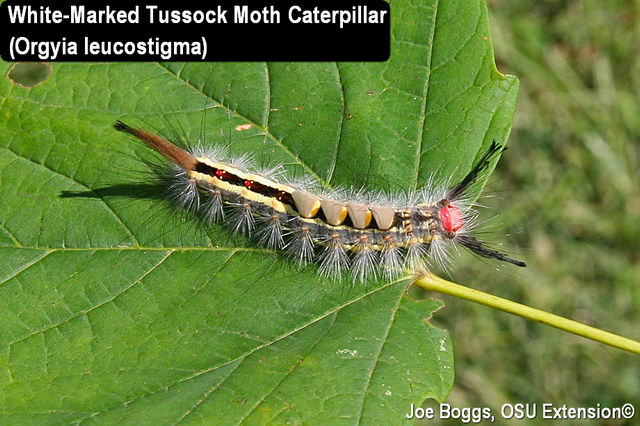 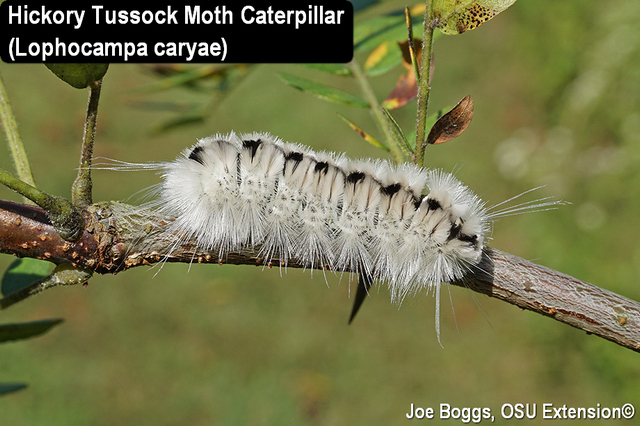