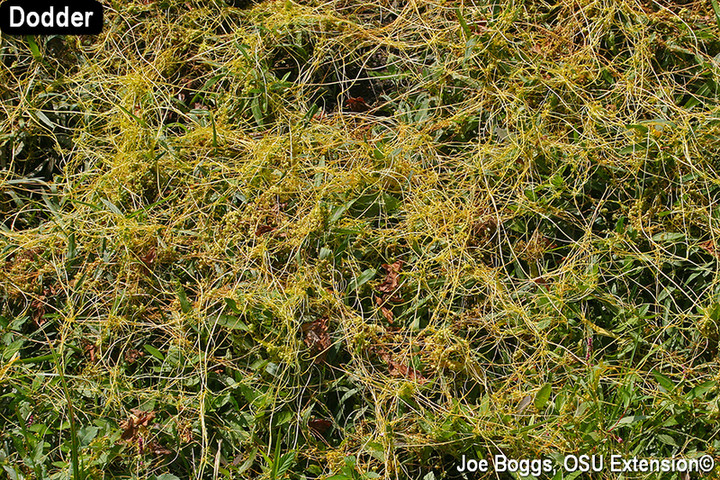 Dodders are parasitic plants belonging to the morning glory family, Convolvulaceae.  They formerly had their own family, Cuscutaceae, with only one genus in the family, Cuscuta.

Depending on the reference, there are somewhere between 100 – 170 species worldwide with 13 species reportedly found in Ohio.  The two most common species found in our state are Common Dodder (Swamp Dodder), C. gronovii, and Field Dodder (Five-Angled Dodder), C. pentagona.

The hallmark of dodders is their thin, tendril-like stems that encircle the stems of their host plants.  Dodder stems range in color from yellow to orange to red depending on the species and age.  Some species, but not all, have tiny scale-like leaves.  Although most dodders have some chlorophyll, it's insufficient to photosynthesize enough sugar to support a singular lifestyle.  Mature dodder plants also lack roots. 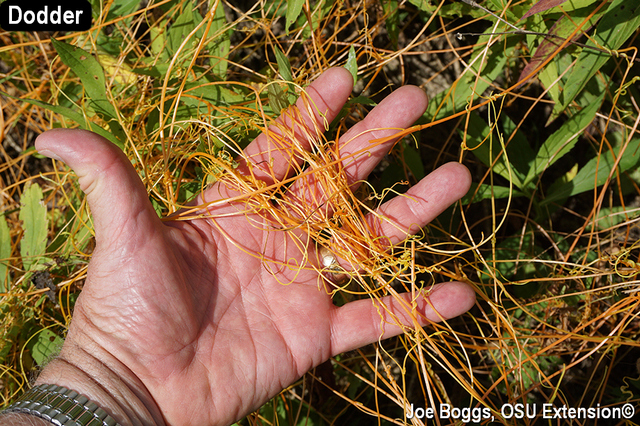 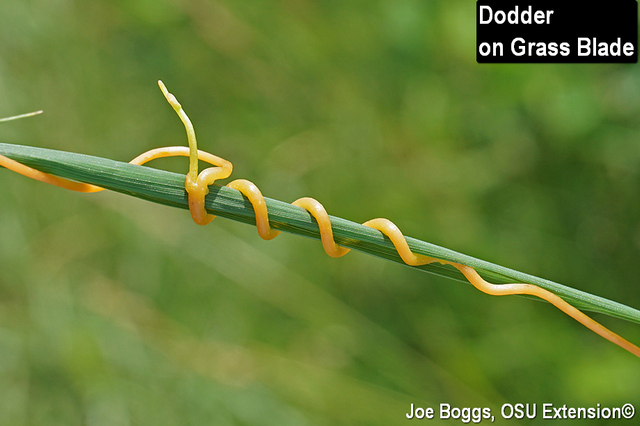 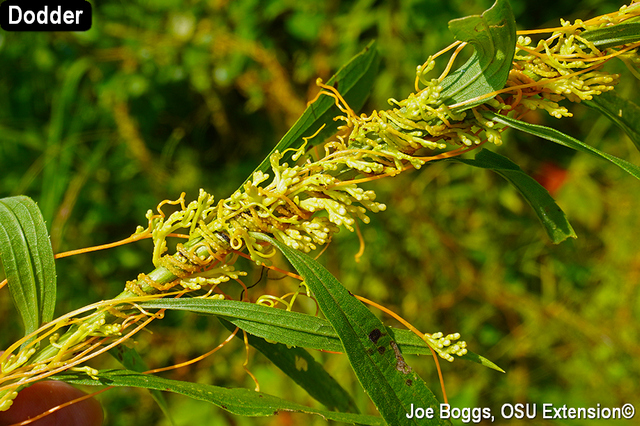 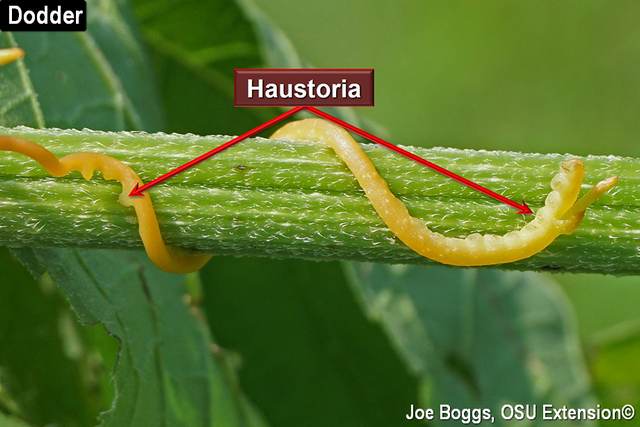 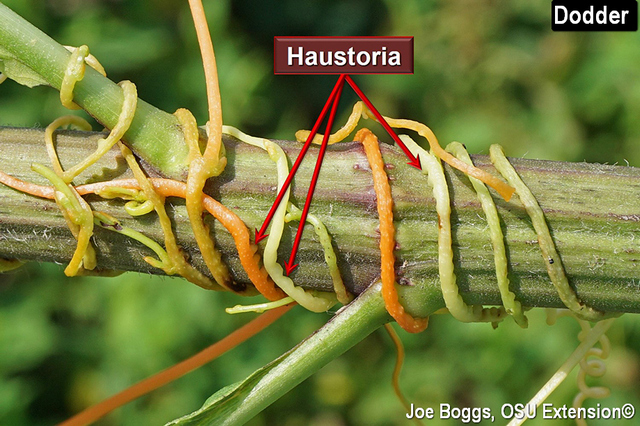 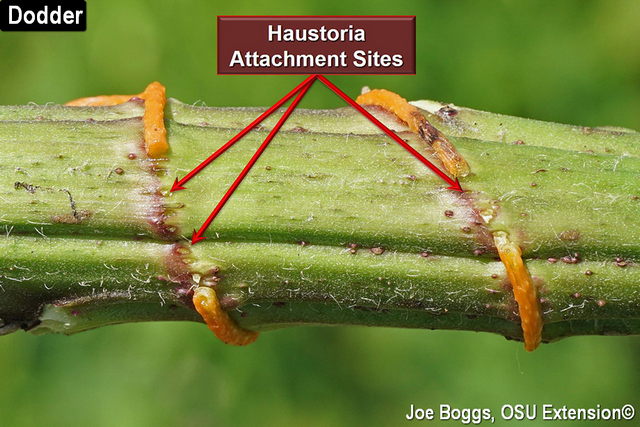 Dodders can attach themselves to an amazing range of host plants; often at the same time.  I recently came across two patches of dodder looking like tangled masses of fishing line which were made more believable because they were on the banks of a lake. The tendrils were wrapped around the stems of goldenrod (Solidago sp.), Callery pear (Pyrus calleryana), and poison ivy (Toxicodendron radicans). 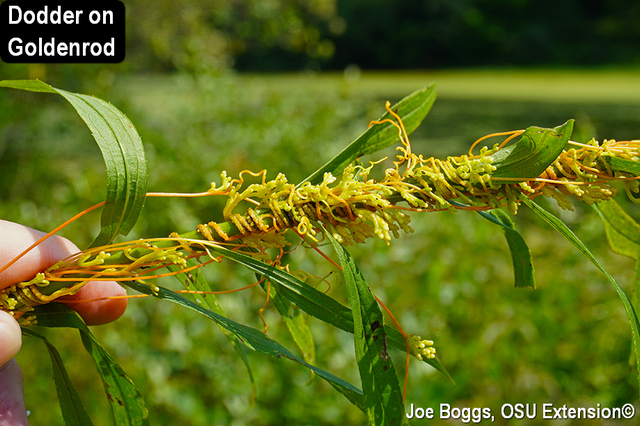 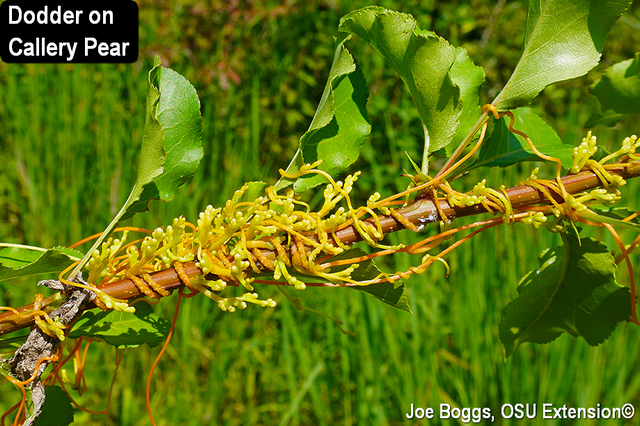 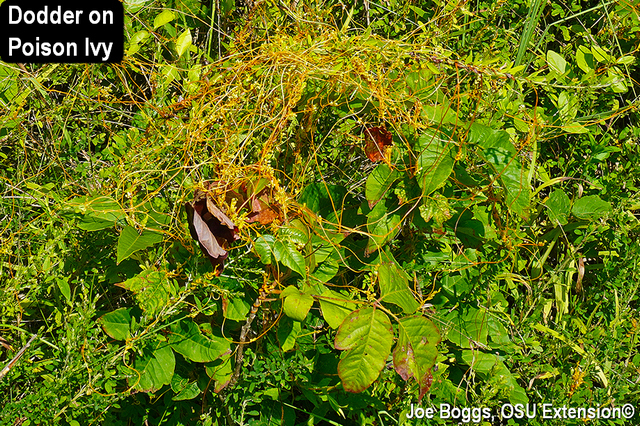 Of course, dodders do not start out looking like a colossal fishing line accident.  They are annual flowering plants with each flower producing 2 – 4 large seeds depending on the species. 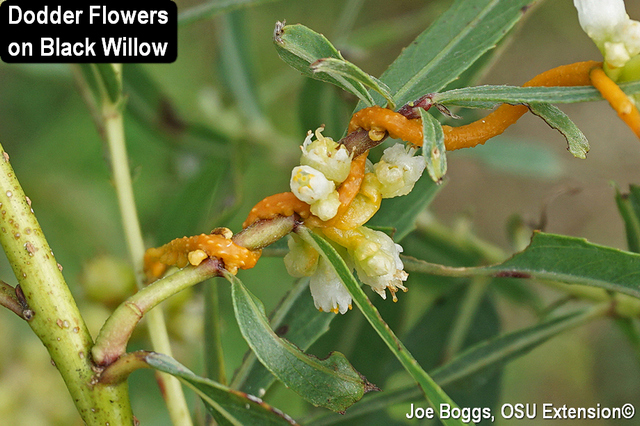 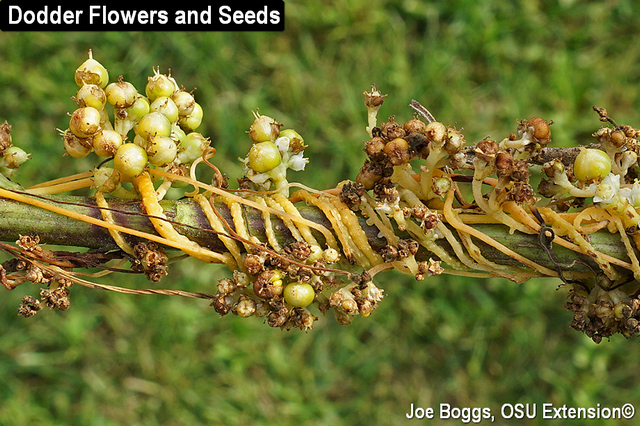 Apparently, there is no obvious seed dispersal mechanism for the large dodder seeds.  Infestations in field crops and landscapes are often associated with the movement of soil, equipment, or water with dodders often found growing along waterways or in flood plains.

The large dodder seeds are loaded with carbohydrates to support the frail seedlings until they can locate a plant victim.  The seedlings produce a rudimentary root system, but if they don't sniff out a host to latch onto with 10 – 15 days, they die. 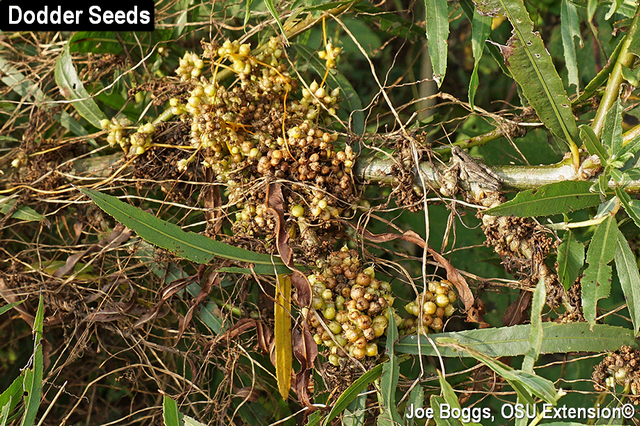 I used "sniff out" deliberately because that's exactly what they do.  Research published in Science in 2006 showed that dodder seedlings are capable of detecting plant volatiles released by prospective host plants.  The sensory mechanism used by dodder is not known, nor are the exact chemicals or mixture of chemicals that send an "eat here" message.  However, it was shown that dodder can distinguish between odors emitted by good hosts like tomato and bad hosts like wheat. 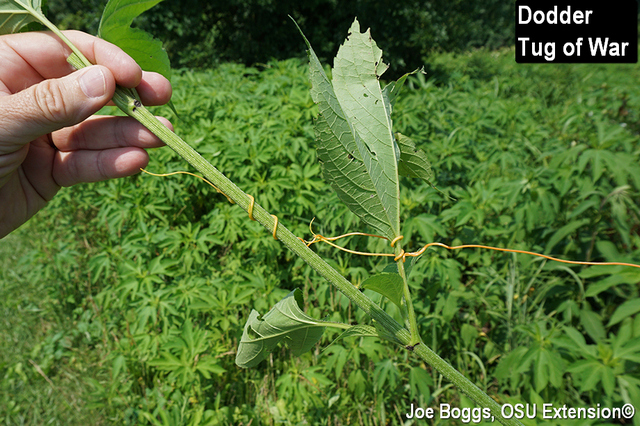 Dodders are stealthy plant invaders using a move that's been described as mimicking a computer virus.  Research published in 2018 in Nature showed that dodders send microRNA into their hosts that silence the encoding of genes that would normally support defenses.  One of those defenses is a protein that clots the flow of nutrients to the site of the dodder's haustoria.  Without the "anticoagulant" protein, the plant's lifeblood keeps flowing into the dodder.

Dodder wreaks havoc on its plant hosts in other ways.  The dodder-bridge between several hosts can serve as a passageway for plant pathogens including viruses and phytoplasma.  Plant stress caused by the heavy extraction of the host's resources can weaken plants making them even more susceptible to plant pathogens as well as environmental calamities such as drought.

Dodder causes annual crop losses worldwide that are measured in tens of millions of dollars.  These parasitic plants have been found sucking the life out of over 100 species of plants including alfalfa, clover, soybeans, and even solanaceous plants in gardens such as petunias and tomatoes. 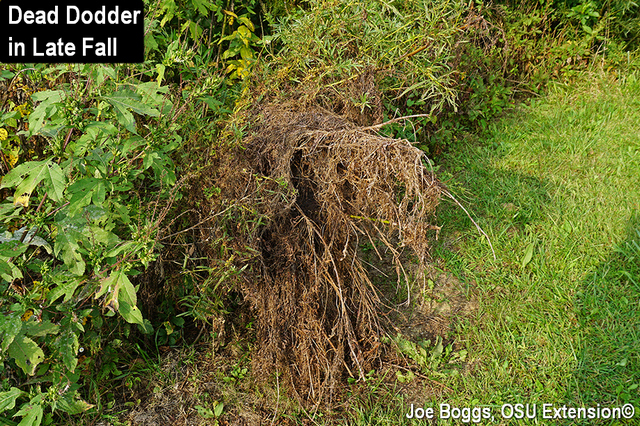 I observed the possible harboring of dodder within the woody stems of black willow (Salix nigra) in 2017.  Dodder flowers were sprouting from woody nodules on the main stems.  The flowers were free from any direct connections to dodder stems. 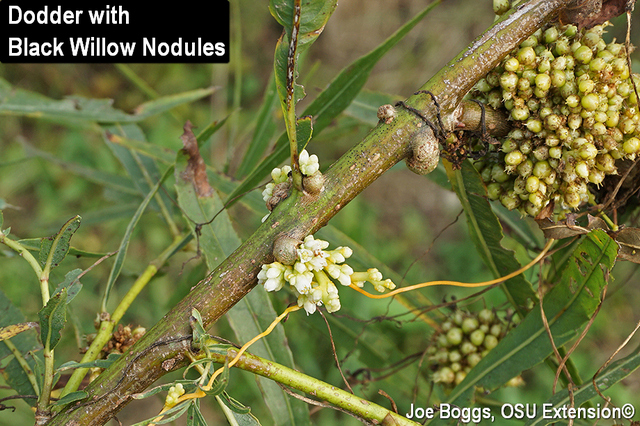 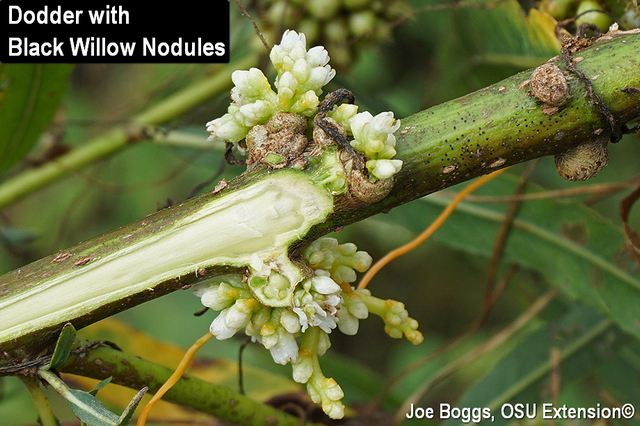 Research published in 2017 in the Proceedings of the National Academy of Sciences showed that dodder's tangled threads can function as important lines of communication between connected plants.  When a plant was attacked by defoliating caterpillars, messages sent to other plants connected on the dodder plant-web caused them to raise their defenses.  The caterpillars were less successful in attacking the pre-warned plants. 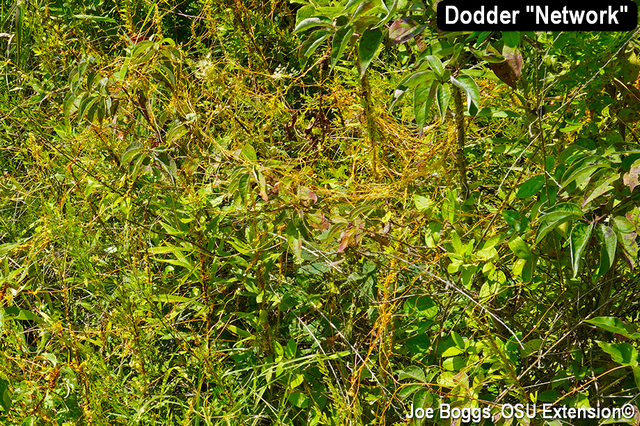 Of course, some claims may be overblown.  In preparing this report, I came across a few dodder products touted to reverse hair loss.  I'm considering a bulk purchase.

2008 Hidden in the host – Unexpected vegetative hibernation of the holoparasite Cuscuta epithymum (L.) L. and its implications for population persistence

2017 A Review on Phytoconstituents and Biological activities of Cuscuta species

2017 Plants under stress by parasitic plants