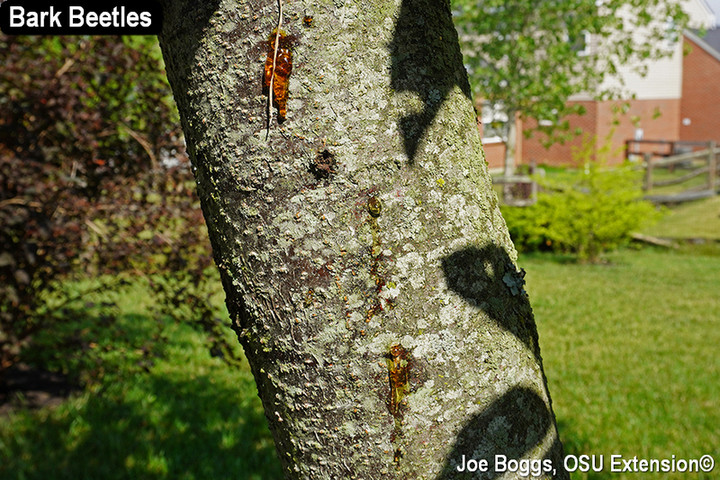 I've received several reports over the past few weeks from landscape managers and arborists of small holes in tree trunks that are oozing sap or exuding odd-looking cylindrical strands of white sawdust.  The delicate strands of packed sawdust and insect excrement are the calling card of ambrosia beetles and are sometimes called "frass toothpicks."  The oozing holes are the work of bark beetles. 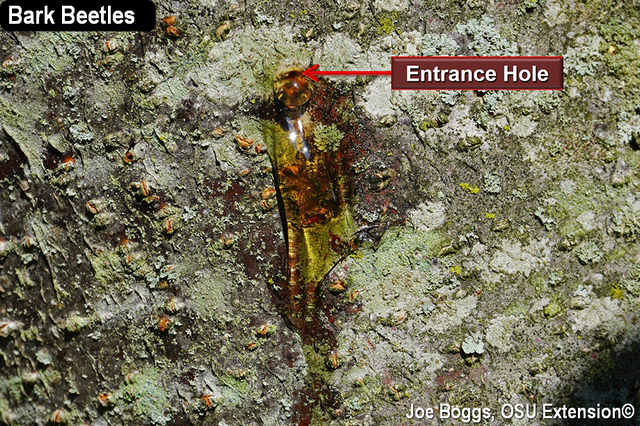 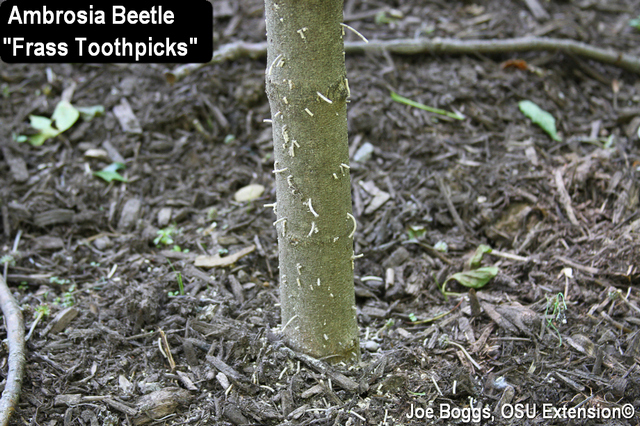 Bark beetles and ambrosia beetles bore small holes through tree bark.  They target trees, or parts of trees, that have dropped their defenses.  Beyond that, they are like apples to oranges.

As illustrated in the graphic below, bark beetle females bore through the bark then tunnel through the phloem parallel to the xylem as they feed and lay eggs.  Their larvae also confine their tunneling and feeding activity to the phloem.  Both the female and larvae commonly etch the outer layer of xylem.  New adults make new holes through the bark as they emerge. 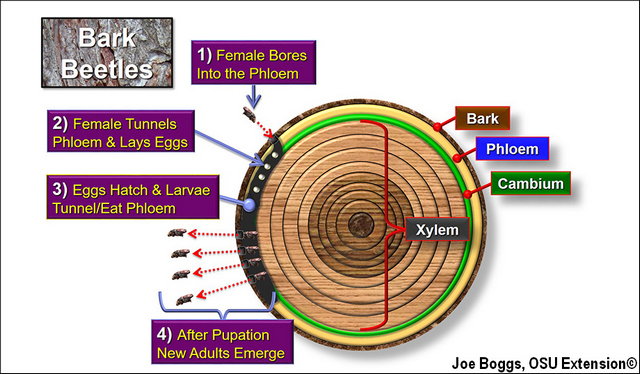 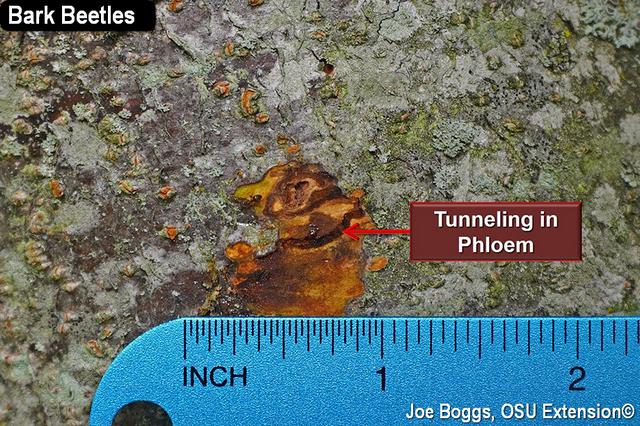 Whether or not sap flows from bark beetle entrance holes generally depends on the tree species as well as the time of the year when females bore into the trees.  For example, it's common for sticky amber colored sap to flow from holes in trees belonging to the Prunus genus such as cherries.  Sap may or may not issue forth from other trees. 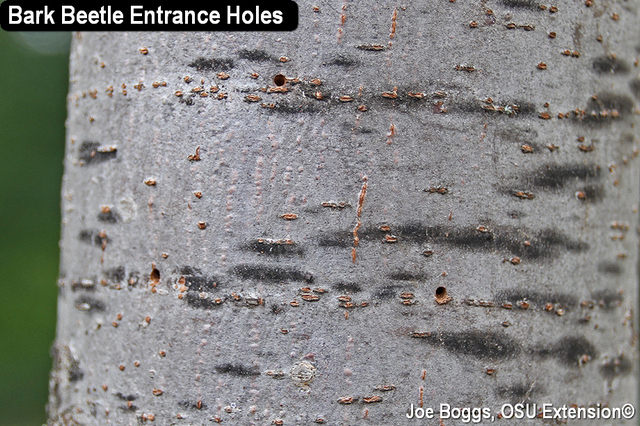 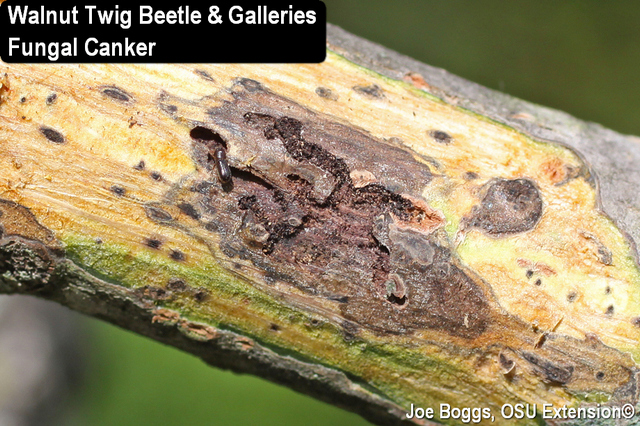 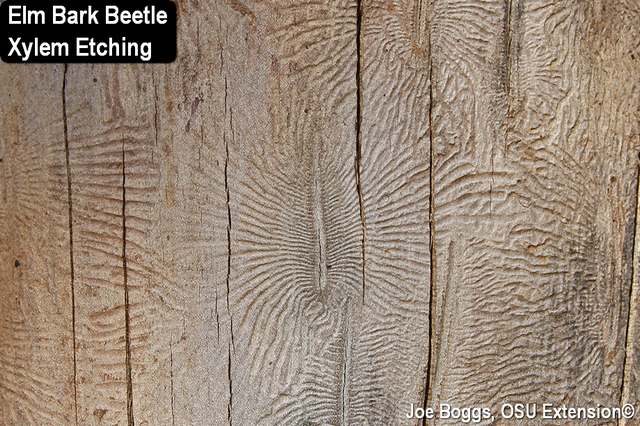 The graphic below illustrates how ambrosia beetles make a living.  Females bore through the bark, the phloem, and straight into the xylem where they tunnel to create galleries in which they lay eggs.  As they tunnel, they release fungal spores.  The resulting "ambrosia fungus" colonizes and digests wood. 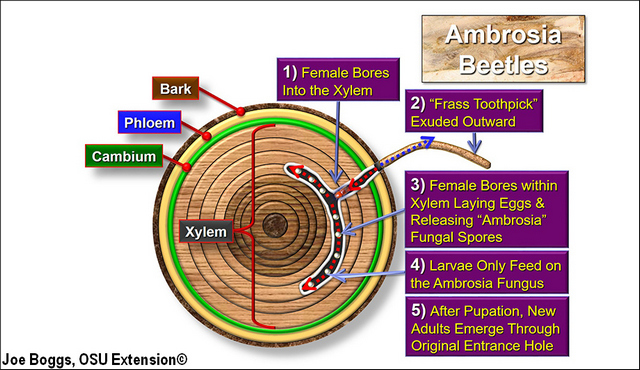 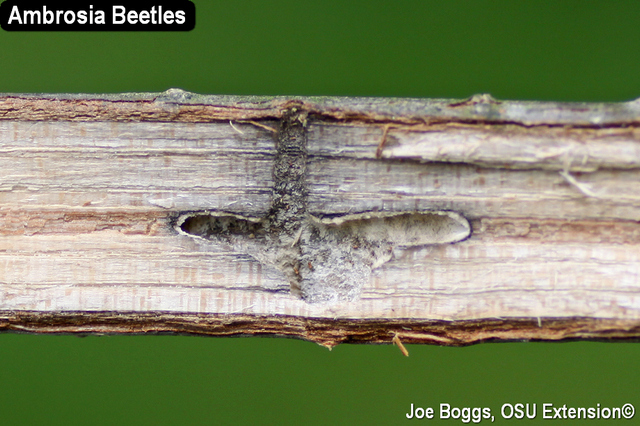 Ambrosia beetle larvae do not eat wood; they eat the fungal "ambrosia" that grows from the walls of the tunneled galleries.  In other words, the larvae don't need to extract nutrients directly from woody xylem; they let the fungus do the work.  The image below shows the ambrosia fungus appearing as a white rind-like growth lining the walls of the galleries. 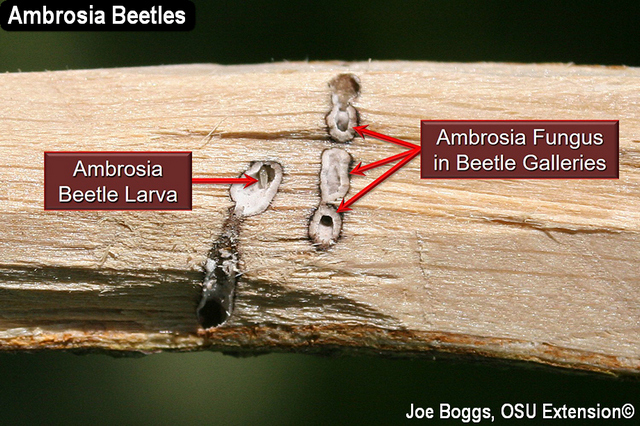 As female beetles bore into the xylem, they push a mixture of excrement (frass) and wood particles backward out of their entrance holes.  The sticky mixture clings together as it is extruded and has been commonly described as looking like "frass toothpicks". 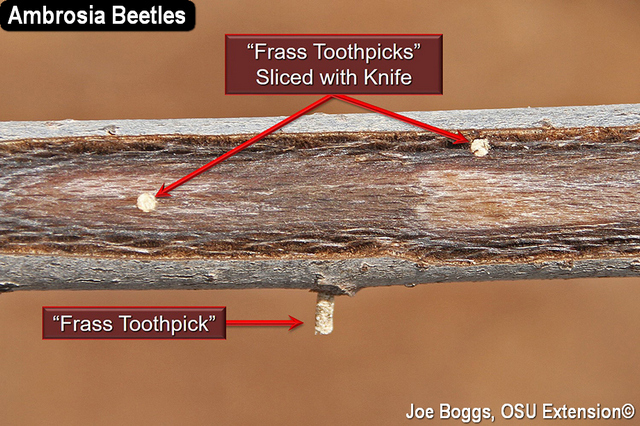 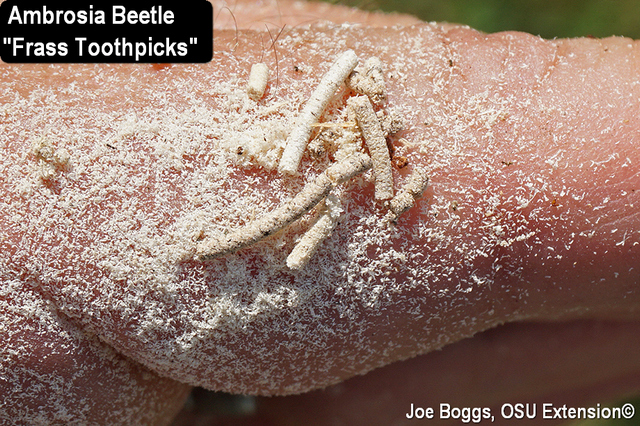 New ambrosia beetle adults emerge from deep within the xylem through the holes that were created by the parent females.  Thus, ambrosia beetles produce fewer holes and their holes can be separated from those produced by bark beetles by inserting a bent paper clip to measure the depth or by removing bark to reveal that holes extend into the xylem. 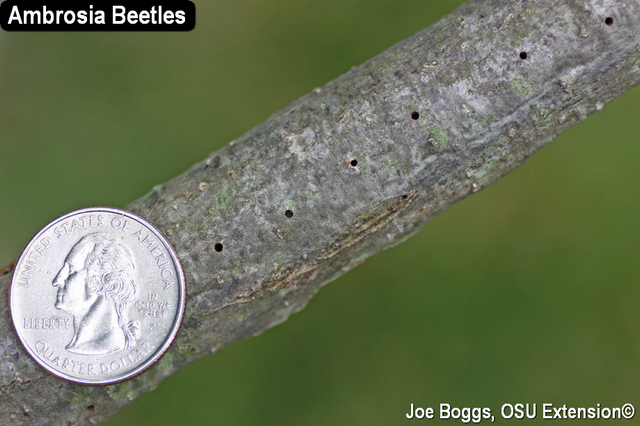 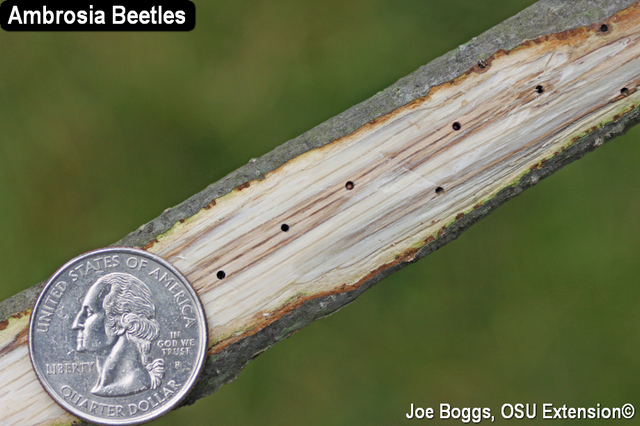 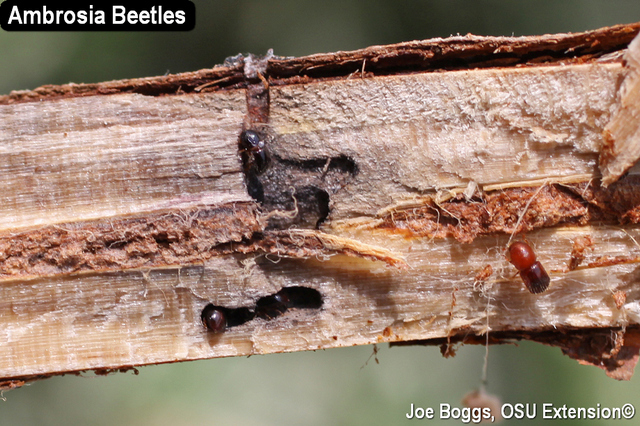 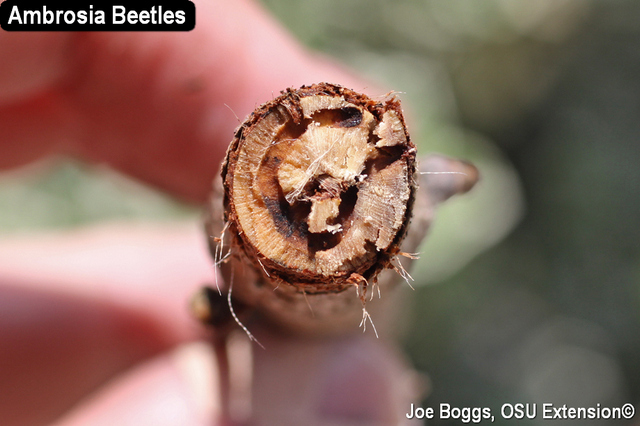 Trees can defend themselves against bark and ambrosia beetles as well as other tree borers.  This may involve chemical compounds that affect the "taste" of the host tree or that interfere with beetle development.  Other defenses may involve physical exclusion such as conifers exuding resin to "pitch out" beetles as they attempt to bore into trees.

However, what Nature gives; she can take away.  Trees may lose their defenses if they are suffering from stress such as lack of water during droughts.  Our recent drought may account for the uptick in the number of attacks observed by horticulture professionals.

On more than one occasion, I've investigated declining American elms (U. americana) considered to be resistant to DED but were riddled with bark beetle holes.  However, they were found by a plant and pest diagnostic clinic to be free of Ophiostoma spp.  The bark beetles were attracted to trees that are suffering from stress.  The American elms were selected for their resistance to the DED fungus, not for resistance to the beetle.  So, the beetle was simply behaving like many bark beetles found in Ohio; they were taking advantage of stressed trees that had lost their defenses. 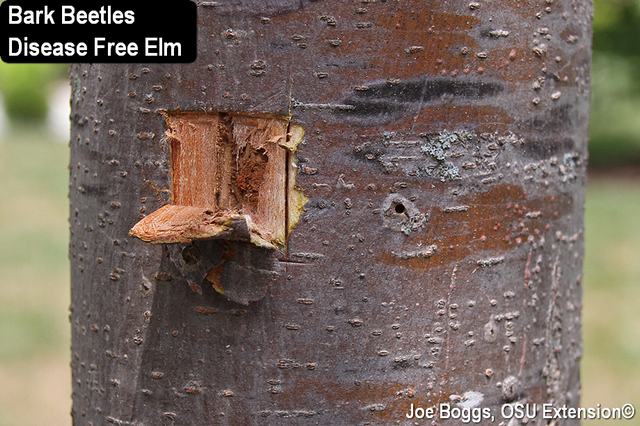 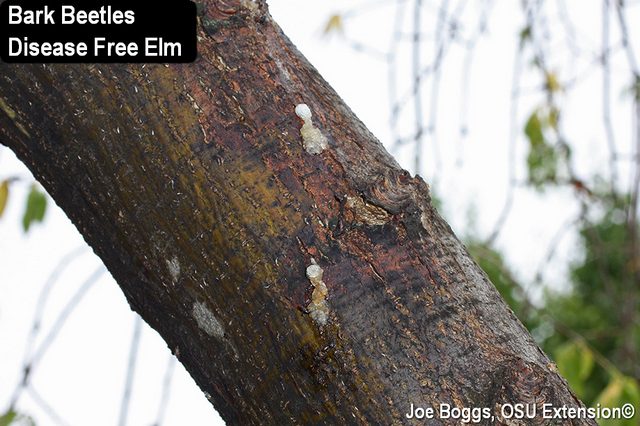 A lightning strike last year illuminated the speed with which ambrosia beetles will find a tree or a part of a tree, that's no longer defended.  The following image of ambrosia beetle "frass toothpicks" was taken on September 20.  The oak tree was struck by lightning on August 30.  The tree still had a full canopy. 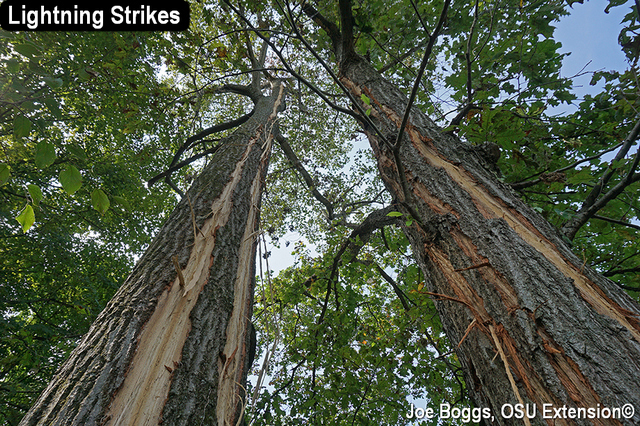 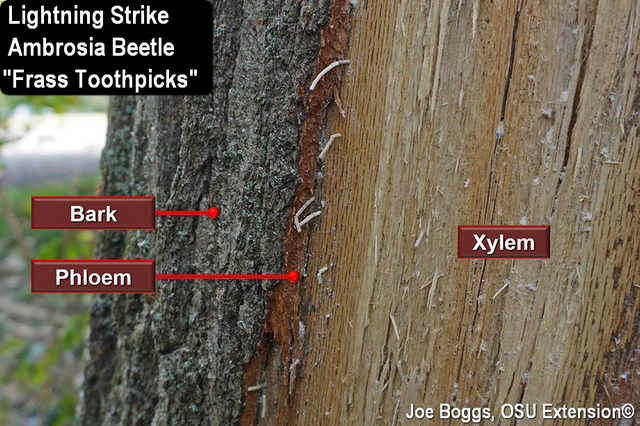 Tree defenses may be greatly reduced or lost once trees reach maturity.  The mature trees shift resources into reproduction rather than defense.  This is most dramatic with fast-growing, short-lived trees rather than with long-lived trees like oaks.

It may seem counterintuitive; however, tree defenses may also be jeopardized by too much of a good thing.  Providing an abundance of nutrients may cause trees to shift resources away from defense to fully utilize the nutrients in support of new growth.  The phenomenon was elegantly explained in a 1992 paper titled, The Dilemma of Plants:  To Grow or Defend (see More Information below).

It's important to note that bark and ambrosia beetles as well as other tree borers may attack parts of trees, such as dying or dead co-dominant stems or branches.  Entire trees may not be at risk.  From an ecological perspective, native tree borering insects provide an important service by initiating the processes that convert tree tissue into organic matter that enriches forest soils.  Of course, this applies to entire trees as well as branches.

The bottom line is that both bark beetles and ambrosia beetles are considered "secondary pests."  This is true of other native tree boring insects.  They are secondary to whatever is causing the trees to drop their defenses.  Management should focus on preventing or if possible correcting the primary problem that's affecting tree health.  In other words, tree health management is tree borer management.