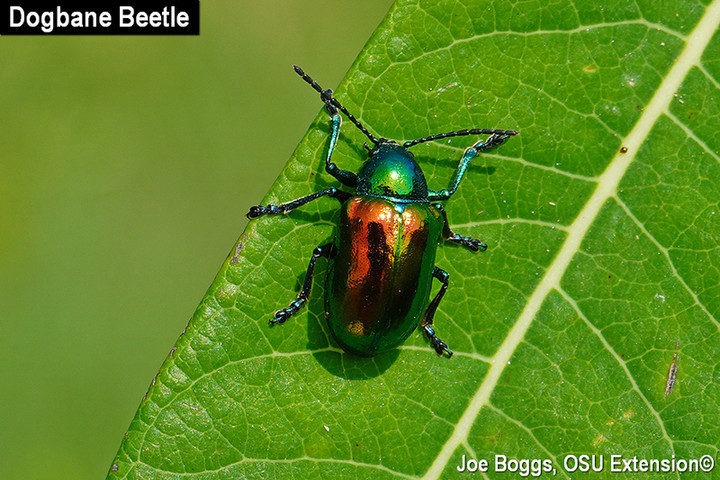 The dogbane beetle's (Chrysochus auratus, family Chrysomelidae) light-blending artistry makes it one of the most beautiful beetles found in Ohio.  These shimmering living gems usually show-up in southwest Ohio in late June to early July.  I always connect their arrival to the 4th of July.

The beetle's scientific name, Chrysochus auratus, loosely translates to "made of gold."  In fact, gold is only one of a medley of colors displayed by these gorgeous native beetles.  As you change your viewing angle, the iridescent beetles glisten with mixed shades of green, copper, blue, red, and of course gold. 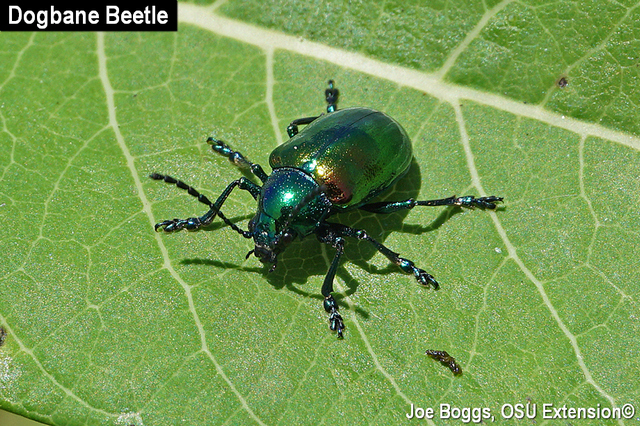 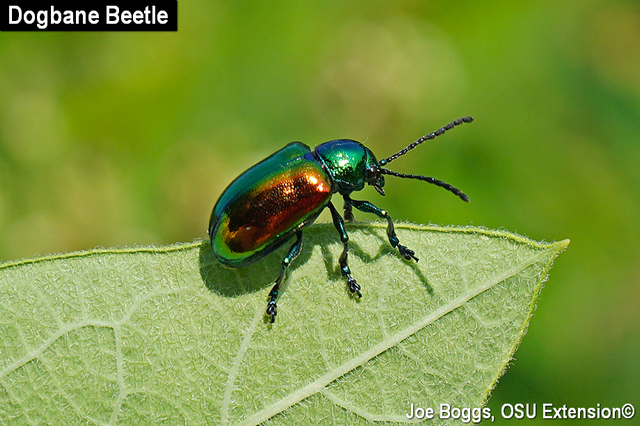 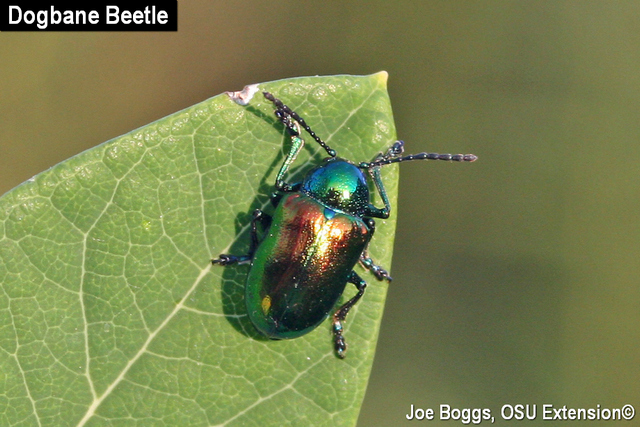 The myriad display of colors is more than just a reflection of light off a shiny surface.  Many insects are shiny, but they don't display the range and depth of colors presented by dogbane beetles.

Dogbane beetles owe their luster to "structural colors."  These colors are not produced by pigments but originate in the scattering of light produced by such things as microstructures as with butterfly scales.  The South and Central American giant morpho blue (Morpho didius) with their iridescent blues are frequently used as the poster child for structural colors.  Structural colors are also displayed on the wings of our native red-spotted purple (Limenitis arthemis astyanax). 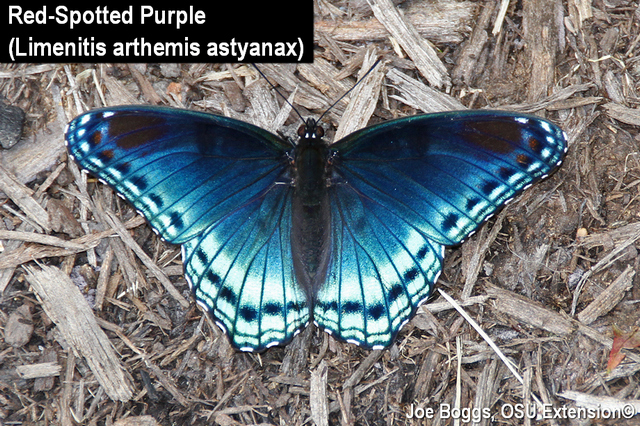 The structural colors on dogbane beetles originate in multilayered structures in the exocuticle starting with a Plexiglas-like translucent surface layer.  Beneath this rests stacks of tiny slanting plates that cover color pigments.  Light rays striking the surface of the plates are reflected as a shimmering sheen, while light rays that bounce off the pigments produce various colors.  The result is a lustrous mix of ever-changing hews; a kaleidoscope of colors that are almost unmatched in the insect world. 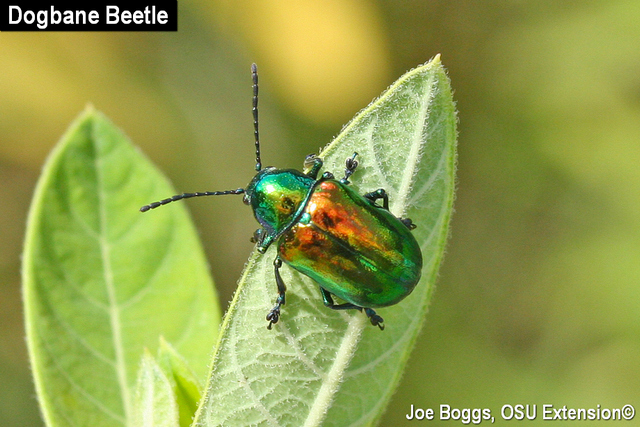 The beetle's colorful display is like a neon sign flashing "don't mess with me" to predators.  Using bright colors to send a warning message to enemies is known as "aposematic coloration." 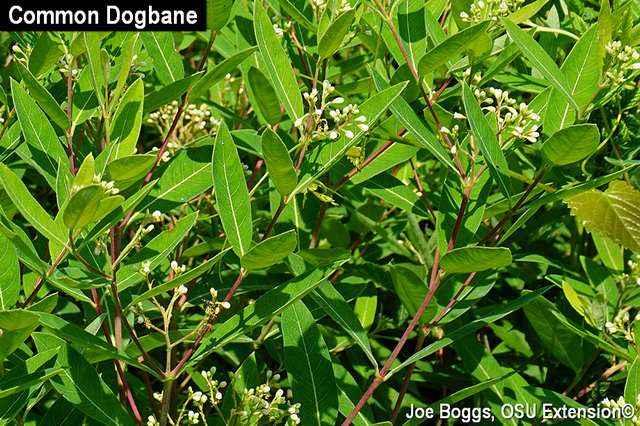 Dogbane beetles feed on the three dogbanes found in North America:  common or hemp dogbane (A. cannabinum), fly-trap; spreading dogbane (A. androsaemifolium); and intermediate dogbane (Apocynum × floribundum).  Although there are reports in the literature that the beetle feeds on various milkweeds (Asclepias spp.), I've scoured milkweeds in Ohio without finding this beetle.  I've wondered if perhaps the reports are actually referring to the Cobalt or Blue Milkweed Beetle (C. cobaltinus) that does feed on western milkweeds.  However, this beetle has not been reported in Ohio.

However, the chemical defense acquired by dogbane beetles from their sappy hosts isn't without risk.  Aside from the toxins, the sap is also very sticky and is intended to clog the mouthparts of insects that take a bite.  The dogbane beetle deals with this challenge by occasionally walking backward while dragging their mandibles on the leaf surface to scrape away the sticky goo. 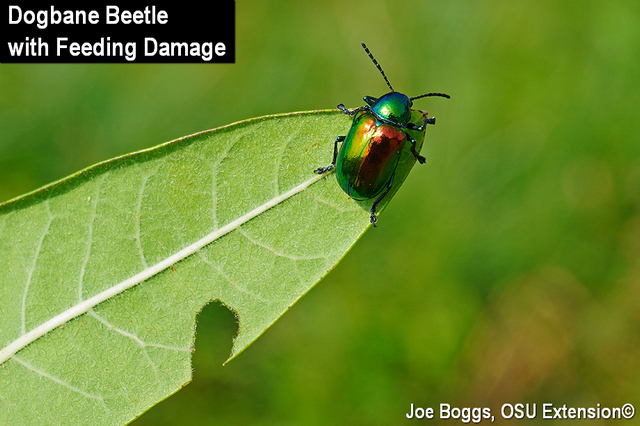 Dogbane beetle females lay their eggs in mid-to-late summer on the roots of their namesake host.  The resulting larvae feed on the underside of the roots throughout the rest of the season.  They spend the winter in the larval stage and pupate in the spring.  There is one generation per year.

So, get out and look for dogbane beetles while enjoying the heat!  If you find them, experience the kaleidoscope of colors by viewing the same beetle at different angles to the sun.  But don't eat them; they are just eye-candy.