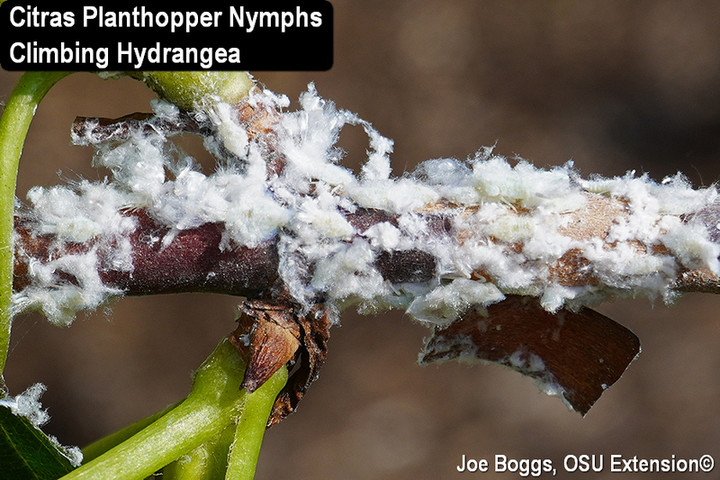 Fulgoroid planthoppers (order Hemiptera, superfamily Fulgoroidea) are relatively small insects with the adults seldom measuring more than around 1/4" in length.  The early instar nymphs (immatures) of many species congregate in groups, or "colonies," and are usually obscured by a dense cloak of tangled waxy, white, cotton-like "fluff." 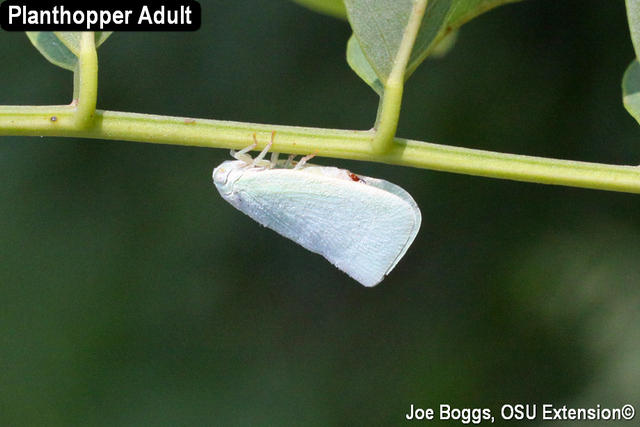 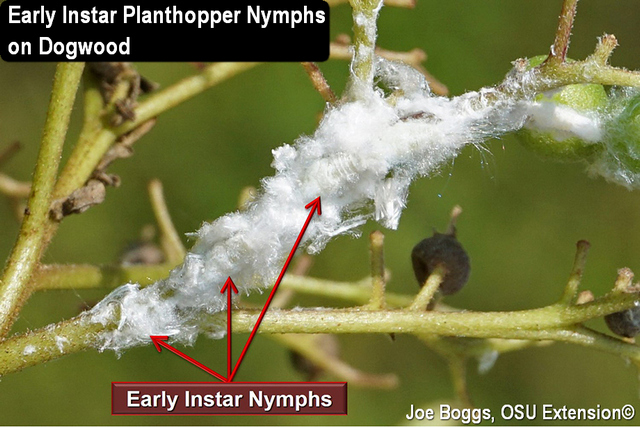 It's common for fluffy-cloaked planthopper nymphs to be mistaken for more serious pests like mealybugs or woolly aphids.  I recently received an e-mail message asking if the attached pictures of planthoppers were cottony maple scale (Pulvinaria innumerabilis).

The fluff repeals water and is thought to protect the nymphs from predators.  Imagine a lady beetle intent on a planthopper snack coming away with nothing but a mouthful of waxy fluff.

If the fluff doesn't work, the nymphs can hop impressive distances to live another day; thus the "hopper" in the common name.  Exactly how they hop was revealed in a fascinating paper published in 2013 in the journal Science (Burrows, M. and G. Sutton, "Interacting Gears Synchronize Propulsive Leg Movements in a Jumping Insect," Vol. 341, Issue 6151, pp. 1254-1256).

The authors provide a rich description of both the jumping mechanism and the mechanics:   The nymphs, but not adults, have a row of cuticular gear (cog) teeth around the curved medial surfaces of their two hindleg trochantera. The gear teeth on one trochanter engaged with and sequentially moved past those on the other trochanter during the preparatory cocking and the propulsive phases of jumping. Close registration between the gears ensured that both hindlegs moved at the same angular velocities to propel the body without yaw rotation. At the final molt to adulthood, this synchronization mechanism is jettisoned.

So, the adults can't jump.  Their defense appears to be mimicking plant parts and slowly creeping along so as not to attract attention.  In fact, the adults and immatures nymphs look and behave so differently there could be a challenge with identification by not connecting the immatures with the adults, and vice versa. 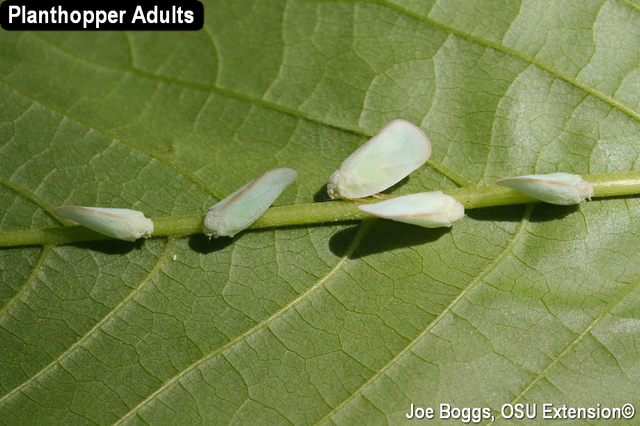 The adults of many species have broadly triangular-shaped front wings that they hold tent-like over their abdomens.  The adults are commonly found resting on plant stems and are often mistaken for moths. 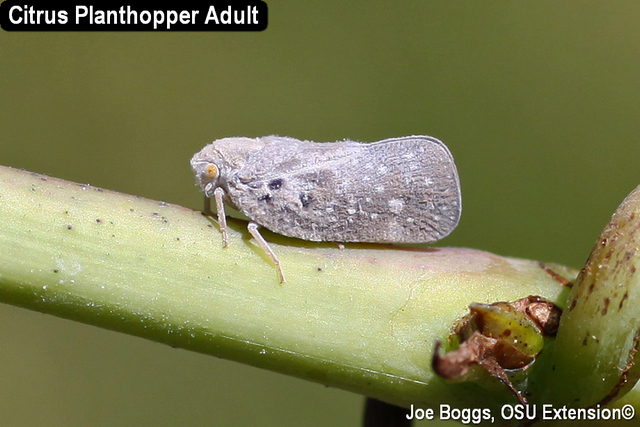 Early instar nymphs are imbedded within a profuse mass of white fluff but can be revealed by carefully removing the flocculent material.  The light green nymphs vaguely resemble airplanes with the wing pads angled backward like the swept wings of a jet.  Late instar nymphs look like some form of Star Wars troop vehicle with tufts of white filaments streaming behind. 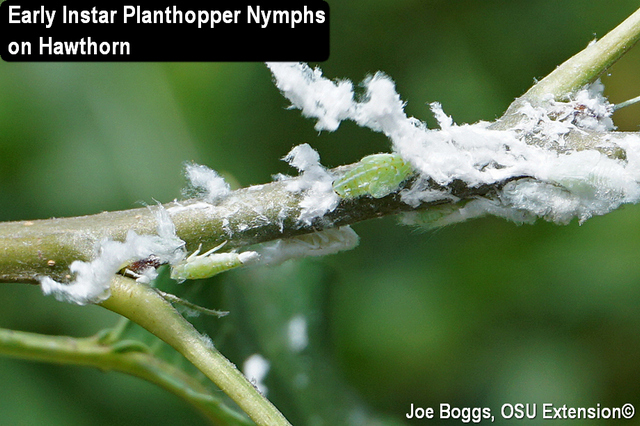 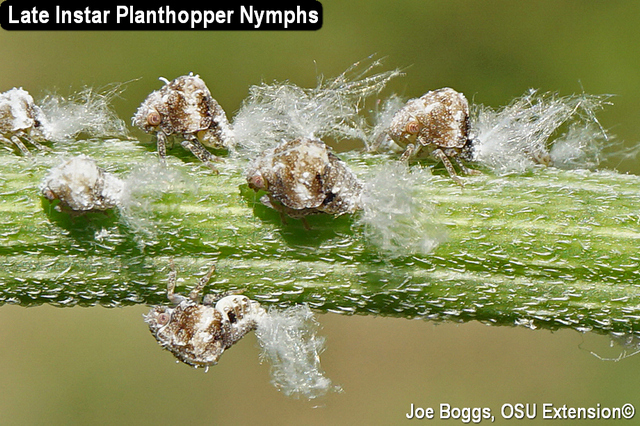 Clusters of planthopper nymphs are appearing on plants in southwest Ohio.  The citrus planthopper (Metcalfa pruinosa) is one of the most frequently encountered planthoppers in our state.  It ranges throughout the eastern U.S. and feeds on citrus in Florida which accounts for its common name. 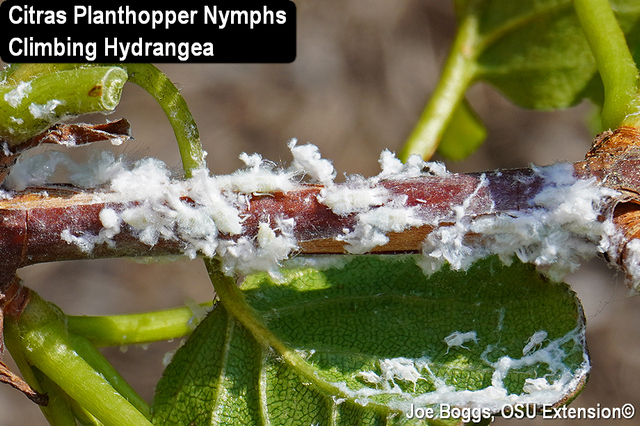 Planthoppers are most commonly found in woodlands, but will occasionally creep up the stems of plants in landscapes as well as vegetable gardens.  They are most often found near the ground; however, it is not unusual to find them several feet off the ground on the stems of trees and shrubs growing in dense shade. 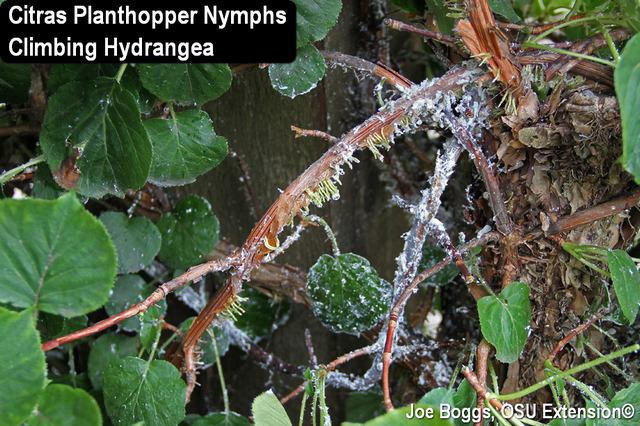 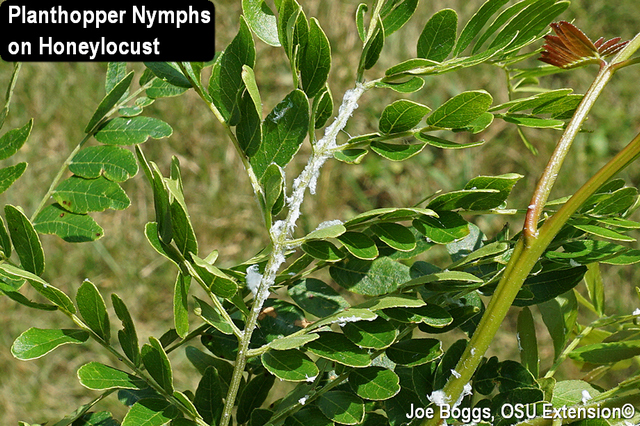 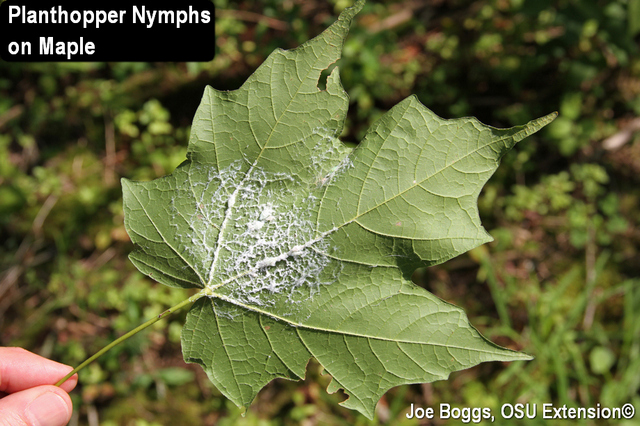 Like their aphid, mealybug, and soft-scale cousins, planthopper adults and nymphs use their piercing-sucking mouthparts into phloem vessels to tap plant sap.  They discharge the excess sugar-rich liquid from their anus in the form of a sticky, sugar fluid called "honeydew" which can become colonized by black sooty molds. 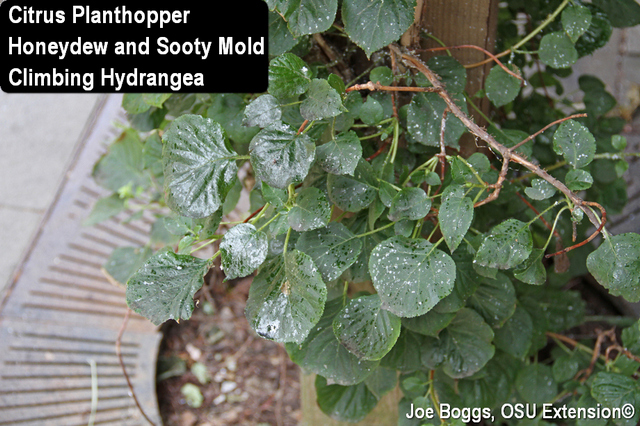 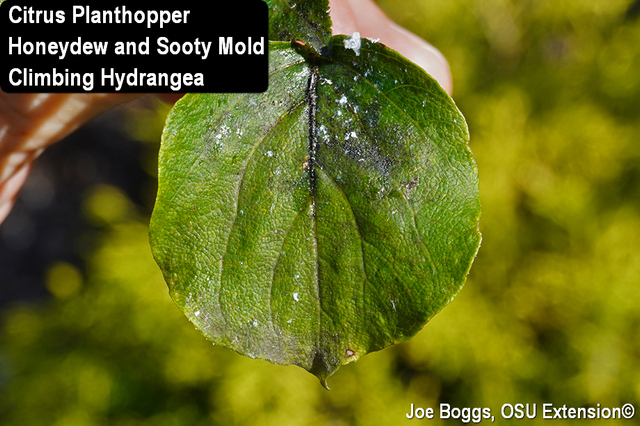 Planthoppers seldom rise above the status of nuisance pests.  However, the collective sap-sucking damage produced by high populations of nymphs may stunt new growth. 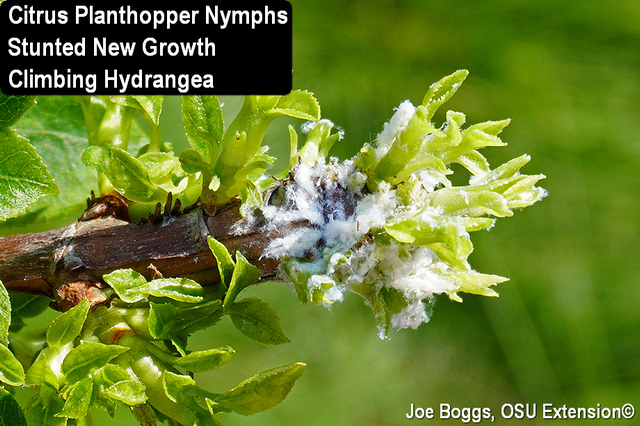 If control is required, the nymphs can be washed from plant stems using a coarse stream of water from a garden hose which will also wash away the white "fluff."  Insecticide applications are seldom warranted, but if needed, insecticidal soap applications are highly effective and will preserve the hopper's natural enemies.