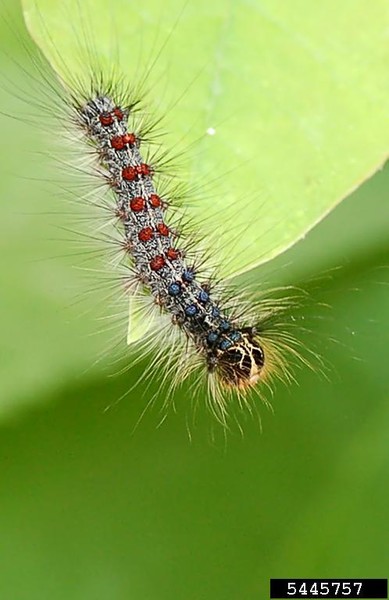 Within the last week, there have been several reports of gypy moth (Lymantria dispar) infestations to the county Extension Offices in NW Ohio, specifically Defiance, Fulton, Henry and Lucas Counties from landowners in those counties.

This comes on the heals of the Ohio Department of Agriculture (ODA) completing the aerial applications of the 2020 Gypsy Moth Management Program in Ohio with a combination of treatments geared at early instar larvae and mating disruption for the adult moths later this summer. In addition to these two programs, ODA also coordinates gypsy moth trapping that occurs throughout Ohio where lures are placed in traps to draw in male moths in a given area using a grid system. This type of monitoring provides valuable information to determine where the leading edge of this insect pest is located; are there any building propulations in the state; along with a collection of data illustrating population dynamics over a long period of time.

This non-native insect hatched earlier this spring as a small caterpillar, but only now if making its prescence known because of its huge appetite for leaves, both decidous and evergreens. When defoliation occurs on decidous trees, those trees tend to respond by sending out new leaves as the summer progresses. Evergreens, with spruces being a favorite, are often killed in a single season when feeding is extensive.