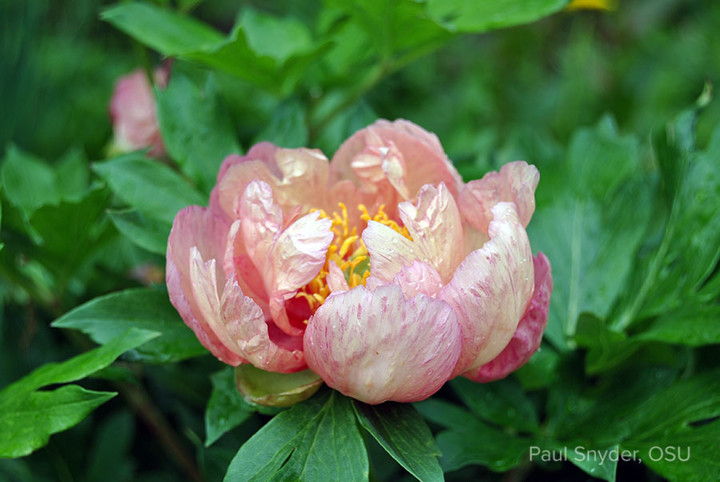 Itoh peonies, also known as intersectional peonies, are a group of hybrid peonies that have become more popular in recent years. In 2012, Ken Cochran planted two Itoh hybrid peonies at Secrest Arboretum (‘Kopper Kettle’ and ‘Bartzella’). The plant was a novelty for staff an volunteers and is still adored by many visitors to Secrest. Over the last two years Secrest Curator, Jason Veil, has greatly expanded the Itoh hybrid peony collect at Secrest.

In 1948 Toichi Itoh, a Japanese peony grower and breeder, successfully made an impossible peony cross. Toichi had been trying for years to make the cross between an herbaceous peony (Paeonia lactifolia 'Kakaden') and woody tree peonies (Paeonia xlemoinei) with no success. It is reported that this was just one of 20,000 crosses he made during his life. It only took one out of 20,000 to change the peony world forever. Sadly, Itoh passed away in 1956 before his plant flowered.

In 1966 Louis Smirnow, a New York accountant and peony enthusiast, secured the plants from Itoh’s widow and brought them to the United States. Smirnow registered the plants as Itoh Smirnow hybrids. Soon American peony breeders were successful in their attempts to create the hybrid and introduced more selections to the market.

Itoh peonies were hard to come by due to their limited quantities and challenges in propagation. One could expect to pay anywhere from $300-$1,000 for a single plant. This changed in the early 2000’s when a Canadian company, Plantek, began producing the peonies in tissue culture, making them readily available to the market. Today, Itoh hybrid peonies are still worth more than other peonies, but their inclusion in a garden is worth the price.

Itoh hybrids have a finer foliage texture than herbaceous peonies and also have better disease resistance with the foliage remaining attractive throughout the season. Itoh peonies mature around 30” tall and require no staking. Some stems become woody and some are herbaceous, yet the plants can be cut back to the ground in the winter with the plants producing huge flowers (up to eight inches across) in the early summer.

This group of hybrids expands the color palette found in the peony world. They are easy to grow and grow successfully in full sun to part sun in well-drained soil.

Do you enjoy reading the BYGL? If so, consider making a donation to support the work that goes into BYGL. Give today by clicking here.