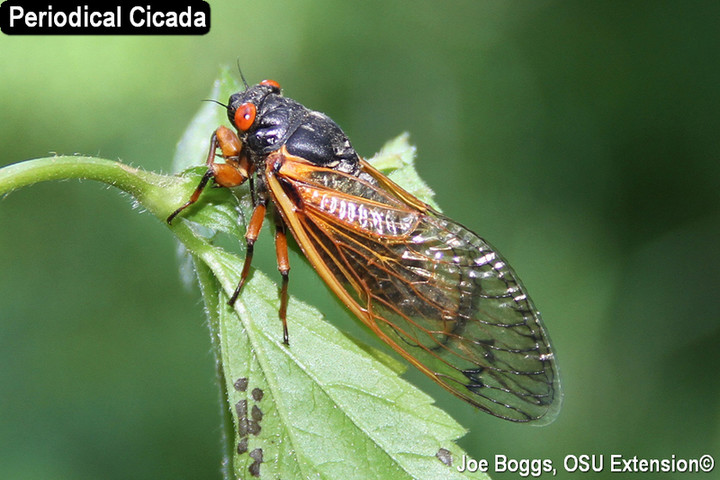 Periodical Cicadas (Magicicada spp.) take either 17 or 13 years to complete their development and emerge from the soil en masse as different "broods" in the spring.  The only periodical cicada brood that's emerging this spring is Brood IX (Nine) in North Carolina, Virginia, and West Virginia.

However, why are we getting reports of periodical cicadas emerging this spring in parts of Ohio?  Indeed, I heard two members of the lonely hearts club "singing" yesterday in a park near my home in Butler County.

It's common for a few early-birds to emerge the year prior to the big show.  In fact, there are also some that will emerge the year after.  The prologue and epilogue numbers are always much lower than the main event with little to no apparent oviposition injury; however, the appearance of these off-year periodical cicadas can create some confusion. 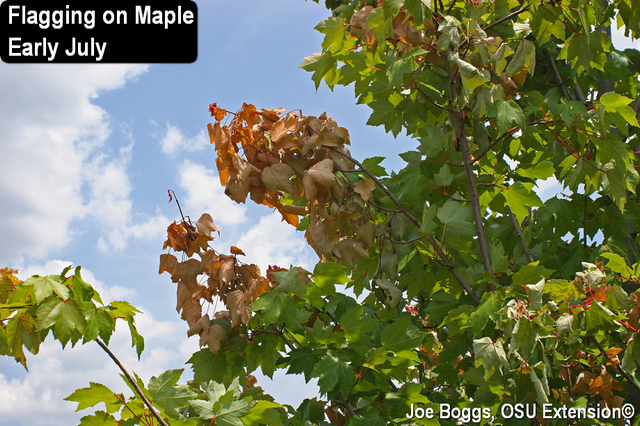 Possible Explanations for an Early Appearance

If we could spin the clock back tens of thousands of years, we would most likely see a single huge emergence of periodical cicadas across the entire geographical range of this unusual eastern North American insect.  It would be the stuff of dreams for entomologists … and nightmares for everyone else! 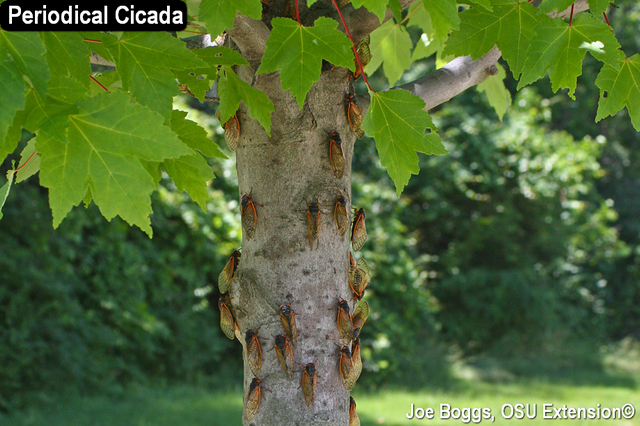 One possible explanation for the early-birds is that these represent a diverging group that may eventually become a distinct brood.  In a personal communication with noted cicada expert, Gene Kritsky (Mount St. Joseph University, Cincinnati) a few years ago, I learned that he and others observed an emergence of a number of periodical cicadas 4 years before the last Brood X emergence in 2004.  Based on the number of adults that emerged, mated, and laid eggs, as well as the number of eggs that hatched (85%) in 2000, it would be reasonable to assume an early emergence this spring originated with these early-bird stragglers.  Whether this splinter group maintains its cohesion to attain new brood status will be up to our descendants to decide.

There are also the effects of climate change to consider.  No one knows exactly how this new environmental incentive for evolutionary change will affect the biology of many insect species.  However, it's certainly a new force to contend with; even if you're a cicada.

Know Your Cicadas:  Prepping for the 2021 Cicada Parties

Periodical cicadas are not locusts.  Locusts are grasshoppers.  It's speculated the mistaken identity originated with early European colonists who had never seen cicadas before or the Biblical locust plagues for that matter.  However, the mass emergence of a periodical cicada brood may have appeared like something straight out of the pages of Exodus (10:1–20). 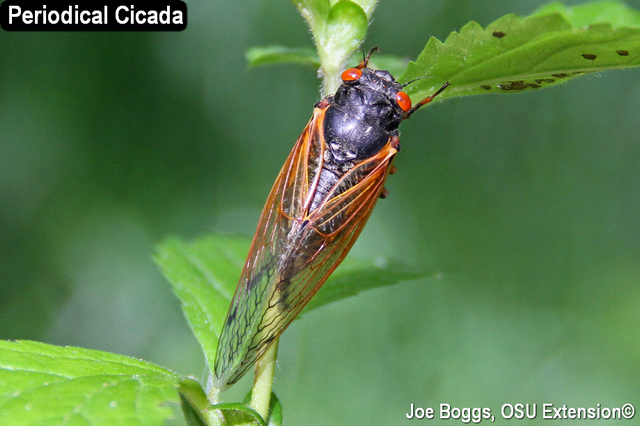 Cicadas (family Cicadidae) are sucking insects and resemble huge aphids (they are related).  All cicadas develop through their immature stages (nymphs) deep within the soil where they use their piercing-sucking mouthparts to tap into tree roots.  However, this feeding activity has never been shown to cause significant harm to overall tree health. 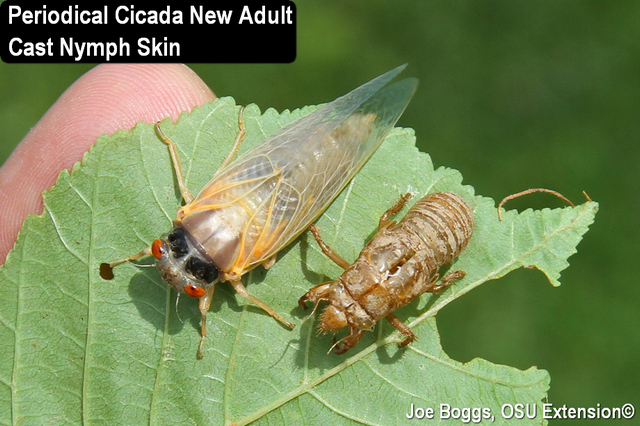 So-called Annual dog-day cicadas (Tibicen spp.) appear sporadically throughout the "dog days" of summer usually beginning sometime in July.  Although it takes 2-3 years for dog-day cicadas to complete their development, some adults emerge every year due to overlapping generations. 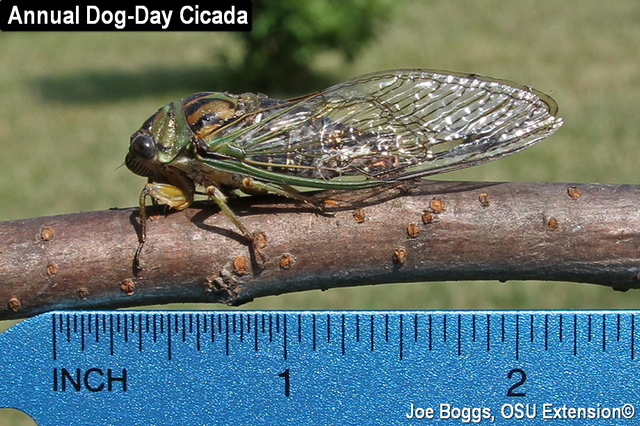 The name "periodical" applies to cicadas that belong to the genus Magicicada spp.  These cicadas require 13 or 17 years to complete their development.  Adults emerge en masse in the spring, usually beginning sometime in May and ending sometime in June.  Adults climb the trees beneath which they developed or fly to new trees where males serenade females with cacophonous songs only appreciated by another cicada. 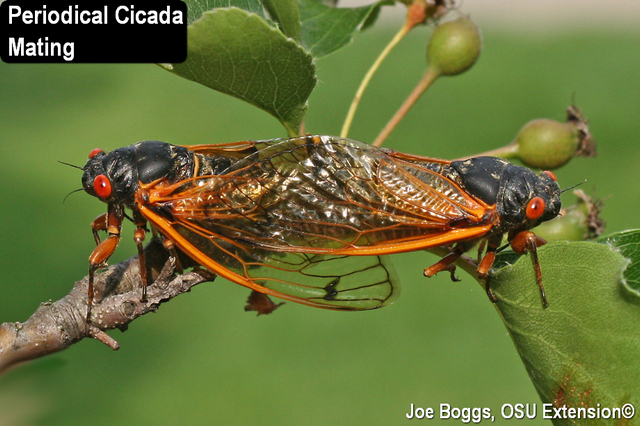 Mated females use their sharp ovipositors (ovi = egg, positor = deposit) to create slits in tree stems into which they insert eggs much like inserting letters into an envelope. Their damage to the vascular system commonly causes the stem beyond the slits to turn brown and die producing the symptom called "flagging" because it now looks like small flags tied to the ends of branches.  In short, a full-blown periodical cicada brood emergence is not subtle. 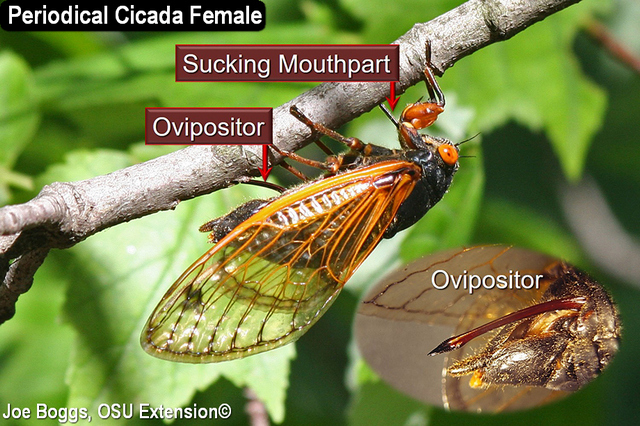 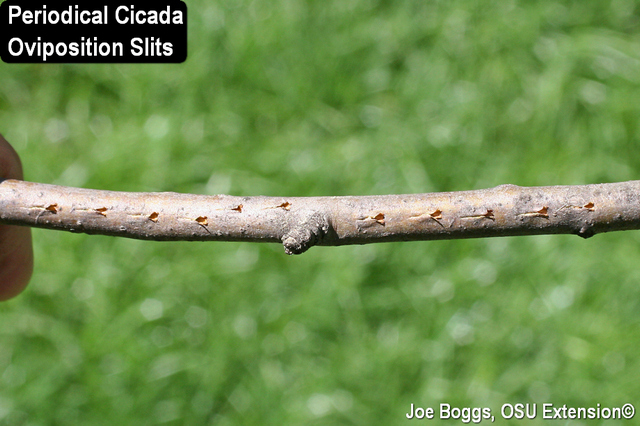 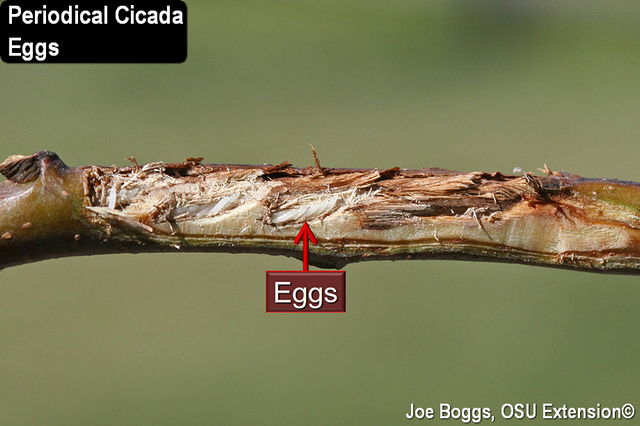 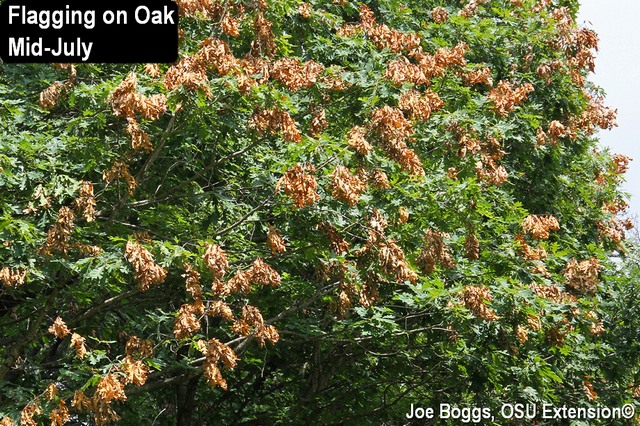