The Lovely Season of White Fringetree 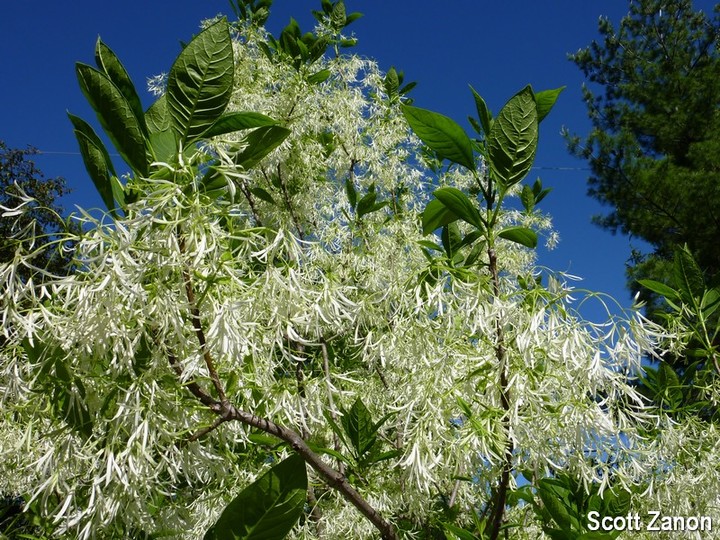 White fringetree (Chionanthus virginicus) is one of our loveliest native spring-flowering trees. One of us (Chatfield) earned eternal cred with Summit County farmer John Graf decades ago, when as a new Extension Agent he was able to identify a blooming male fringetree wafting floral aromas a quarter mile across one of John’s productive muck fields of sweet corn and other vegetables. It is that special, such an elegant fragrance.

Scott started this bygl-alert aborning as white fringetrees reached their peak in his Upper Arlington neighborhood in central Ohio last week; now these small trees are at their peak in Doylestown in northeast Ohio. Fleecy white petals in drooping panicles create a cloudlike effect en masse, there are glossy green leaves, and attractive blue egg-shaped fruits if you plant both male and female fringetrees near and dear to each other.

Pollution-tolerant, fairly pH-adaptable, relatively slow-growing, our native fringetree is a true delight. Grow as a multi-stemmed plant or train to a single stem. Chionanthus is in the olive family (Oleaceae), closely related to ash (Fraxinus) and is the other genus in which emerald ash borer (EAB) insects may be found, though this pest does not appear to be serious on fringetrees.

The small olive-like fruits have been brined by the foodie-preneurish Mark Hoenigman and are quite tasty, though with some bitterness appropriately redolent of olives. There are anywhere from 60-150 species in the genus, mostly from tropical and semi-tropical habitats, with three from temperate areas. One other temperate species is the Chinese fringetree, Chionanthus retusus, commonly planted in arboreta and in many gardens. There are numerous cultivars of both the native and Chinese fringetree now in the trade.

Final Note: For those of you born centuries ago, you may remember that the Latin binomial, as coined by Linnaeus himself, was Chionanthus virginica, with a female gender ending, but according to the International Code of Botanical Nomenclature (ICBN) it is modernly classified in the masculine gender. This is odoriferously apropos since oddly, male flowers emit a more delightful bouquet than female Chionanthus flowers. So, Chionanthus virginicus it is.