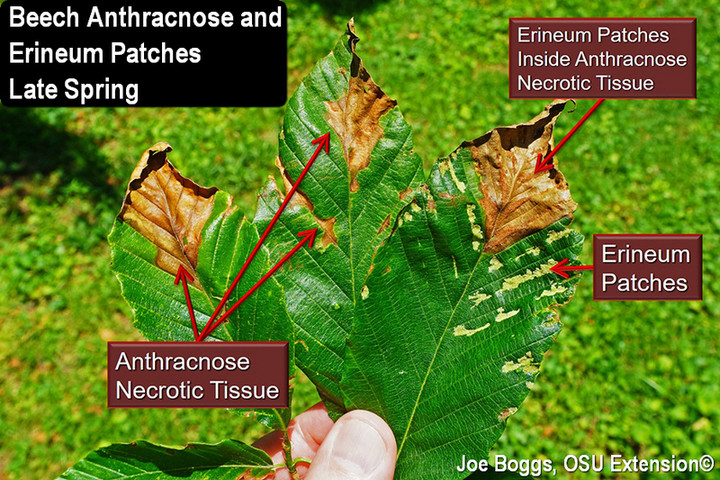 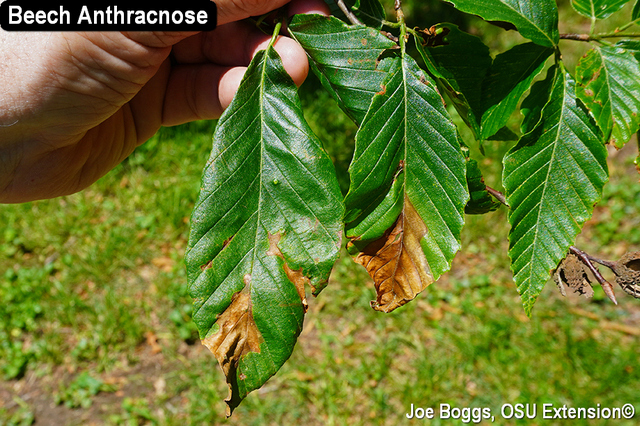 However, infections by many of the anthracnose fungi are favored by cool, wet conditions during bud break.  Another thing they have in common is that most seldom cause appreciable harm to the overall health of their tree hosts.  Beech anthracnose seldom produces appreciable defoliation and if it does, trees have plenty of time to produce new leaves. 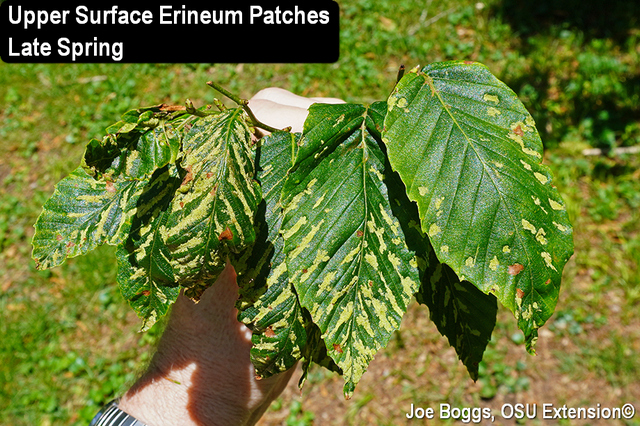 The 1982 USDA publication, An Illustrated Guide to Plant Abnormalities Caused by Eriophyid Mites in North America, remains one of the most comprehensive sources of information on symptoms produced by eriophyids.  You can peruse the publication by clicking this hotlink:  https://naldc.nal.usda.gov/download/CAT87208955/PDF

The authors describe the symptoms produced by Acalitus fagerinea as:  "The yellow, common, attractive erineum patches on the leaves of American beech occur in the angles between the midrib and lateral veins on the upper surface of the leaf."

The authors didn't use bolded text; I added that to emphasize a point.  Indeed, felt-like erineum patches on upper leaf surfaces of American beech are now common in southwest Ohio.  They will slowly progress through several color stages throughout the season from light green in the spring to brilliant yellow to yellowish-gold then rusty red to reddish-brown and finally dark brown.  Although the patches are located on the upper leaf surface, they cause dimpling of the lower leaf surface beneath each patch. 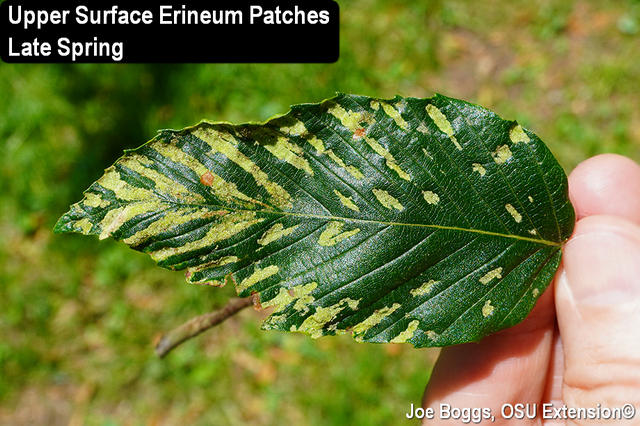 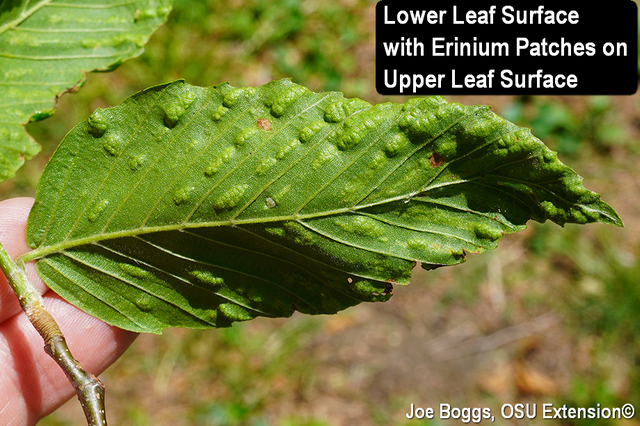 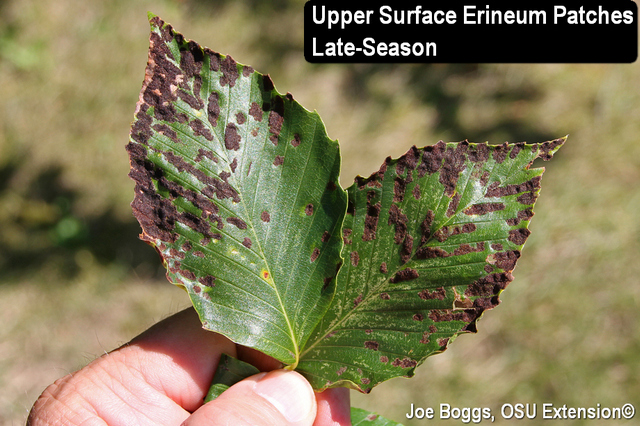 However, I'm increasingly finding erineum patches on American beech that present a complete reversal of the upper-lower leaf symptoms.  The felt-like patches occur on the lower leaf surface and the dimpling appears on the upper surface.  Additionally, the patches progress through a different range of colors from light green to deep red. 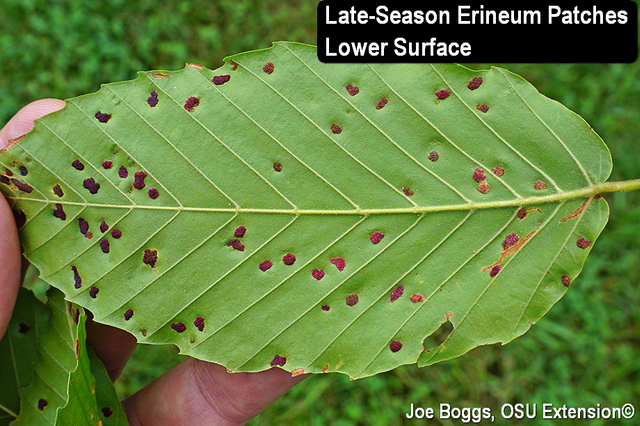 However, it's important to correctly identify erineum patches and not mistake them for other tree problems, as well as vice versa.  For example, eriophyid erineum patches may also occur on trees showing symptoms of beech leaf disease (BLD).  As far as anyone knows, there is no connection.  Thus far, BLD has only been found in northeast Ohio.  The eriophyid(s) behind the erineum patches occur throughout the state.  Finding the two unrelated problems on the same tree, or sometimes the same leaf could present a diagnostic challenge. 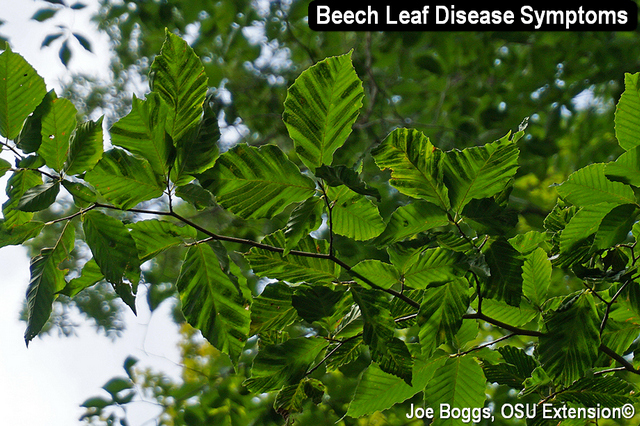 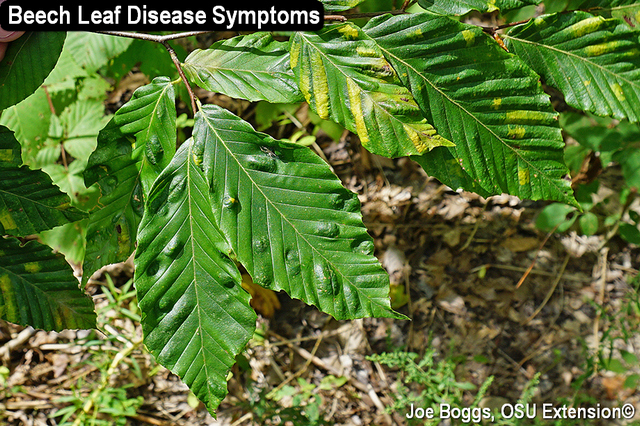