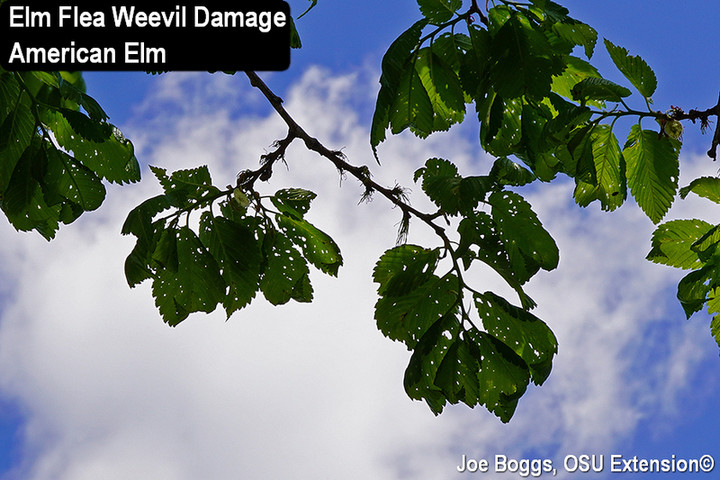 Holes can appear in the leaves of native, non-native, and hybrid elms at this time of the year owing to damage caused by the non-native elm flea weevil (Orchestes steppensis).  This weevil was incorrectly identified as the European elm flea weevil (O. alni) for many years.  That's because O. steppensis was an unknown Eurasian species that is almost identical in size, color, life cycle, and lifestyle to O. alni. 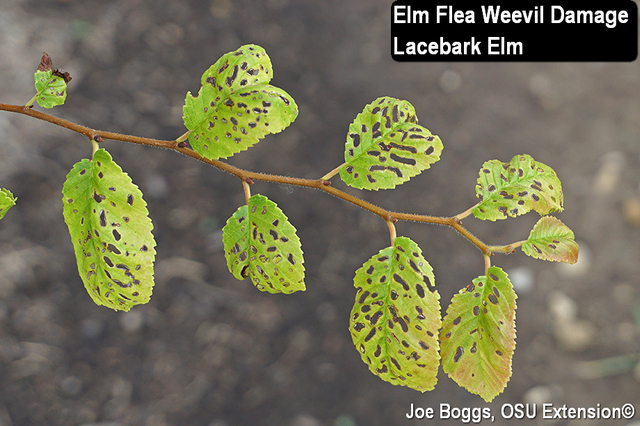 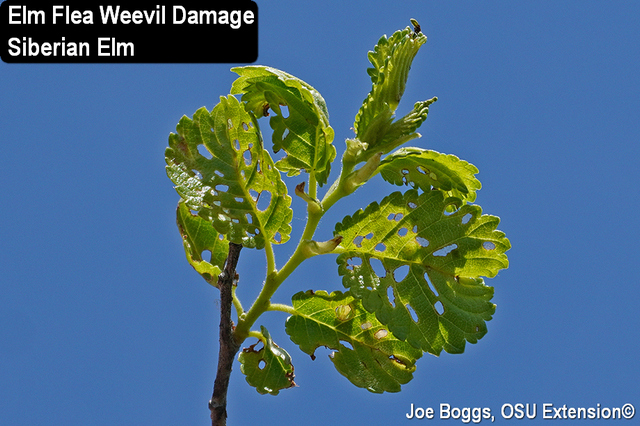 However, in a backward non-native discovery, it was eventually found that the weevils in the U.S. were morphologically identical to an unnamed weevil species found in Eurasia.  This lead to the eventual description of the species as O. steppensis and the recognition that this was the true U.S. invader, not the European elm flea weevil which has not yet been found in North America.

On the upside, all of the observations and research reports published between 2003 and 2016 regarding the flea weevil affecting elms in the U.S. remain valid even if the information applies to O. steppensis and not to O. alni.  On the downside, O. steppensis has not yet been given an approved common name through the Entomology Society of America (ESA).  In the meantime, I'm going to use "elm flea weevil" for O. steppensis even though this common name has not been recognized by the ESA.

Weevils are beetles with a snout (rostrum) and their chewing mouthparts are located at the tip of their snout.  If you use a hand lens, you clearly see the snouts on elm flea weevils.  If you're very careful, you will also see that their hind femurs are thickened to hold powerful muscles allowing them to jump like a flea.  If you're not careful, the flea weevils will flee. 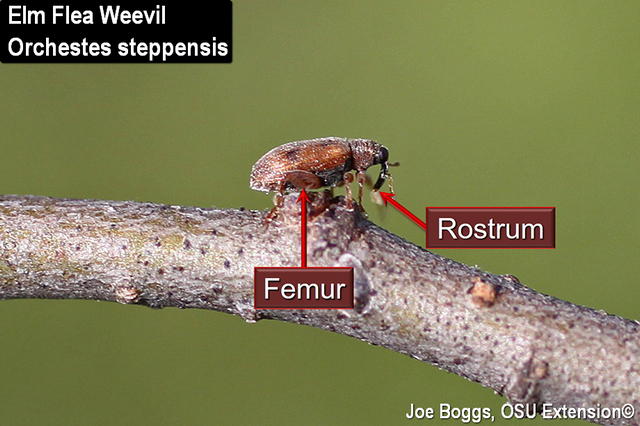 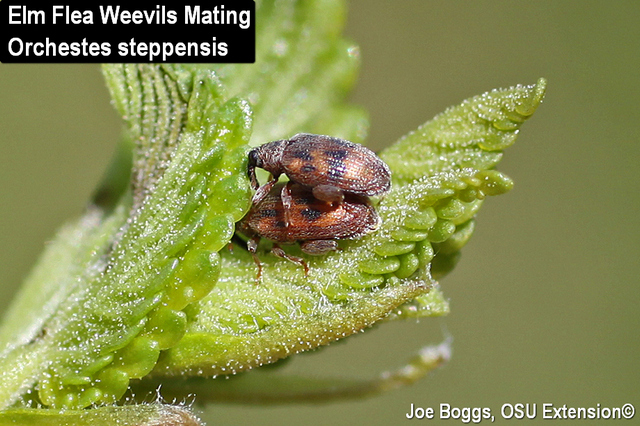 Females also use their chewing mouthparts to chew small notches in mid-veins and major lateral veins of the leaves into which they lay eggs.  Damage caused by oviposition may be noticeable with leaves failing to fully expand beyond the wounded leaf vein and the affected area becoming distorted. 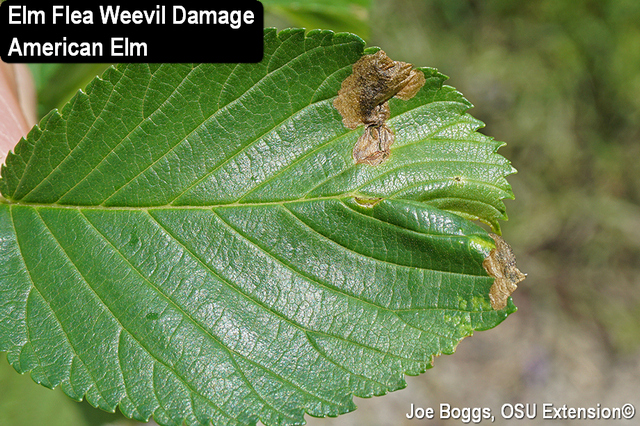 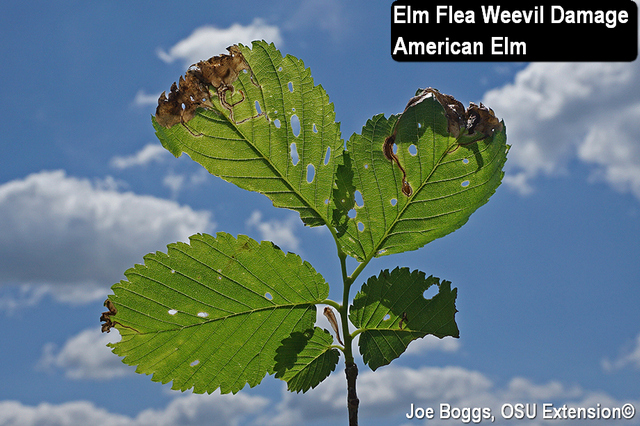 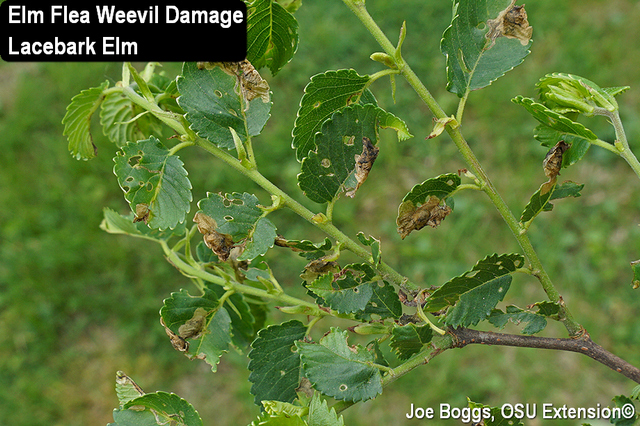 The new adults that emerge from the mines produce the second round of seasonal leaf damage.  These adults feed heavily for about a month adding substantially to the leaf-holes produced by the spring adults. 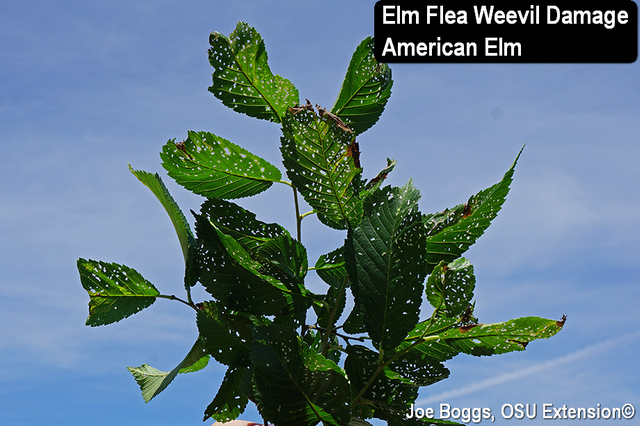