Authors
Jim Chatfield
Published on
May 19, 2020 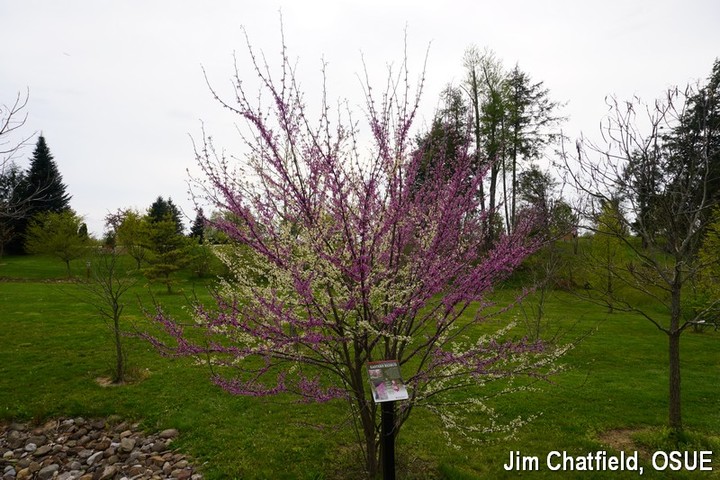 More Good, and closing with One Ugly.

Fernleaf beech leaves have emerged. This is the favorite tree of former Secrest Director Joe Cochran, who was greatly saddened by the loss of a wonderful specimen in the Wooster Tornado of 2010. The foliage is a delight (Fagus sylvatica var. ‘Aspleniifolia’).  And speaking of beeches, woodland Americn beech (Fagus grandifolia)  is glorious now as ever, with skyward trunks, leaf scales on the Johnson Woods Nature Preserve boardwalk, and the light green emerging foliage.

Hornbeam maple (Acer carpinifolium) is one of the favorite maples in my yard even though it once died back almost to the ground one winter (“I consider every plant hardy until I killed it myself” said Peter Smithers). The hornbeam-like leaves so unlike other maples, the attratice light pink stipules, and the baby samaras developing now are all first rate.

I have received a number of responses re the bygl-alert on redbud cauliflory (official botanical term for flower and fruits directly from main stems)  and the radical cauliflowery (wild-haired unofficial term of Scott Zanon) for intense corsage-like clusters of caulflorous redbud flowers. Here is some pictures from Diane and Erik Durbin.

Speaking of redbuds, what is the story of that two-faced redbud in the lead photo above? It is a white redbud scon grafter to a purple-pink flowered redbud rootstock which has gotten loose.

And there is the lovely emerging leaves and flowers of hickory (Carya sp.), the soft new foliage of goldenlarch (Pseudolarix amabalis) in our backyard and the lavender-colored wild geranium wildflowers at Wooster Memorial Park

Nostoc. This gummy, slimy cyanobacertium was in a waste area near the Secrest nursery. Wikipedia describes them as “filaments of moniliform cells in a gelatinous sheath.” The name “Nostoc” was coined by Paracelsus, which sent me down an interesting rabbit-hole.

Paracelsus was born Philippus Aureolus Theophrastus Bombastus von Hohenheim in 1493, and was a Swiss physician and theologian.  Bombastic me may have been in some respects, after all he was an alchemist, but Paracelsus is often considered the “Father of Toxicology” and wrote this (in German): “What is there that is not poison? All things are poison and nothing is without poison. Solely the dose determines that a thing is not a poison.”

This is the fundamental nature of toxicity, “the dose makes the poison” reality that is such an important distinction: Think of arsenic, a chemical element common in soil, water, minerals, yet rarely at toxic levels in nature. Yet arsenicosis poisoning can be a killer as is arsenic’s role in many chronic human diseases. The dose makes the poison.

But back to Beauty: Thy Name is Buckeye. The yellow buckeyes (Aesculus flava) arrived last week at Secrest and other OSU locations. All part of upcoming Buckeye plantings in honor of the OSU Sesquicentennial.