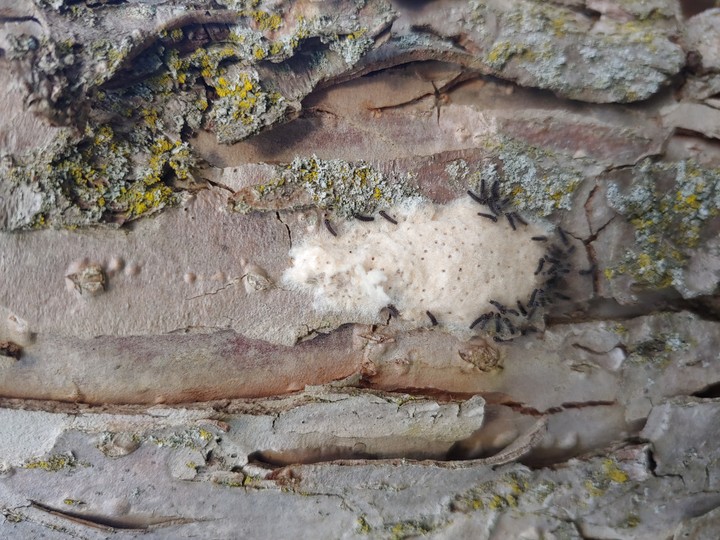 While the hatch of gypsy moth (Lymantria dispar) caterpillars in some areas of the state began weeks ago, and the optimal treatment time to manage the caterpillar stage is nearing, first instar caterpillars just recently made their 'insect-debut' in NW Ohio, specifically in Toledo where the observation was made. The small black caterpillars began hatching, but cool temperatures have kept them on or near the egg mass, not venturing out for their first meal just yet. They will be many more of their 'leaf-canopy-cruching' siblings joining them as the hatch will occur over a period of time, and not all at once.

The photo below includes some cast skins of caterpillars from 2019, several pupal cases (tan and brown, papery and pill shaped objects) where adults emerged last summer, and an egg mass (light tan color) with five small gypsy moth caterpillars near the bottom of the mass eagerly awaiting their first meal.

Gypsy moth is a non-native insect introduced to the US in the 1860s by a European, L. Trouvelot, in a misguided attempt to breed silkworms. The insects escaped his residence and became established in the town of Medford, Massachusetts after eradication efforts ultimately failed.

The Ohio Department of Agriculture (ODA) has an extensive amount of information on their website about the gypsy moth, including life-cycle and biology, host preferences, quarantine information, and 3 different managment zones in Ohio. Check out the website at:  https://agri.ohio.gov/wps/portal/gov/oda/divisions/plant-health/gypsy-moth-program/gypsy-moth-program

Are you seeing gypsy moth caterpillars in your area of Ohio? We would love to hear from you and share what populations are like in your own landscape, properties that you manage, or places that you visit. Send photos and/or emails to stone.91@osu.edu with your early season gypsy moth report.