Authors
Jim Chatfield
Published on
May 6, 2020 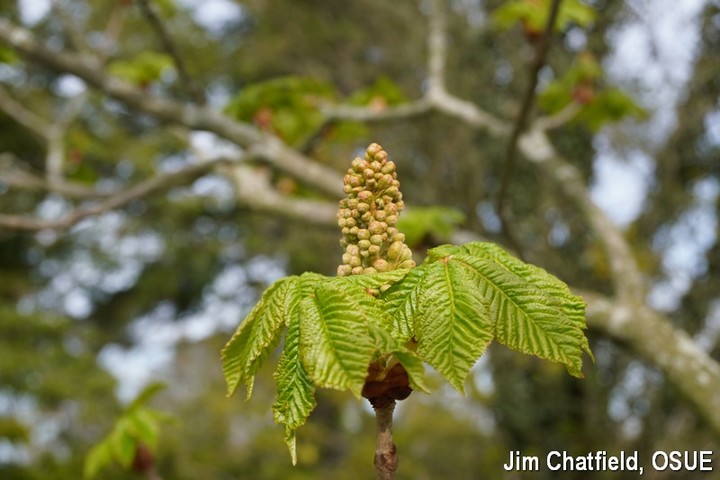 It’s been a while since the latest Secrest Arboretum bygl-alert update on April 4: (https://bygl.osu.edu/index.php/node/1486). Here is some of what happened recently and is occurring right now at Secrest. Plant development is influenced by growing degree-days which are now at 217 for Wooster, Ohio, so although another cool down with slower development is forecast for this week, this gives an idea of what to see if you visit Secrest now. Hopefully we can avoid a major frost Friday, but 28 degrees F is forecast.

For reference, checking the https://www.oardc.ohio-state.edu/gdd/ website, birch leafminer emergence occurs at 215 and elm leafminer emergence will be at 219.  Wherever you are, get your outdoor, socially-distance walks and pest scouting in as the world changes rapidly as Spring progresses.

The Lovely Genus Aesculus. Buckeyes and horsechestnuts are fabulous as leaves and flowers emerge. Here are just a few pictures of their recent entrance to woodland, arboretum, and garden stages.

The Lovely/Loathsome Nature of Cedar Rusts. Cedar apple rust and cedar quince rust has done its thing in northeast Ohio in the past weeks, as shown below on junipers at Secrest Arboretum. The large cedar apple rust galls (combinations of the Gymnosporangium juniperi-virginianae fungus and juniper tissue) and the slimy fungal growth of the cedar quince rust fungus (Gymnosporangium clavipes) have released spores that made their way to rosaceous hosts: apple/crabapple, hawthorn, serviceberry, and quince.

The fungus that grows on the rosaceous host will not re-infest those hosts, alternating back to junipers over the coming spring and summer months.  ODNR urban forester Lisa Bowers from the central Ohio area sent some great pictures of cedar quince rust on juniper there.  Symptoms of cedar apple rust and cedar hawthorn rust occur mostly on leaves of the rosaceous hosts while the cedar quince rust will occur primarily on fruits and galled stem areas.

Dawnredwoods at Secrest. The grove of this  deciduous conifer (planted in 1953) is ever prominent at Secrest even without foliage in the winter, but emerges in beauty as greening in the spring progresses.

Bagworm Clothing. One of the fascinations of bagworms is their individuality: their bags are what they do not eat. If on junipers, then its Junipers for breakfast, lunch and dinner but enough left over that they make their house out of same. So, seeing last years’ bags this year, made from last year's London planetree leaves, at Secrest last week was the ultimate in posh.

Stay tuned for Secrest in early May, Part II…The Rest of the Story.