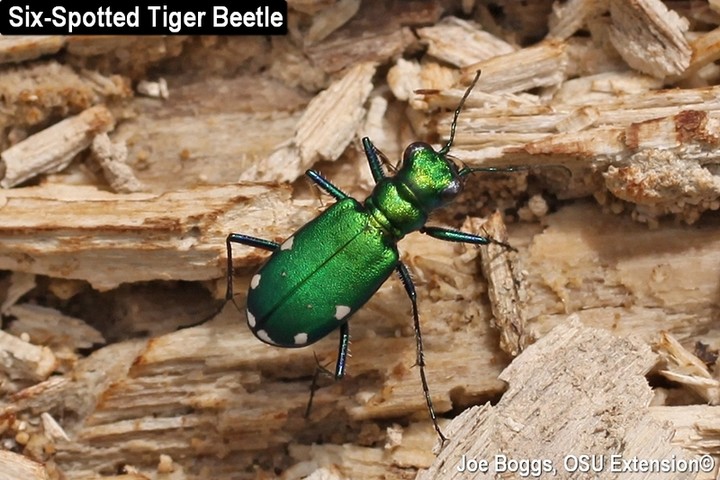 I recently received three e-mail messages from hikers who had visited parks in southwest Ohio with each asking for an identification of shiny green beetles (or "bugs" in two messages) they had spotted darting about on forest trails.  One sender asked if they were seeing emerald ash borers (Agrilus planipennis (EAB)).

Two of the messages included attached images that were either too blurry or too distant to be helpful; however, I'm certain they were not EAB.  I'm more certain the beetles were six-spotted tiger beetles (Cicindela sexguttata) because I've been seeing them myself; they are one of my favorite native predatory beetles.

Mistaking the tiger beetles for EAB is understandable given that the tigers are truly emerald green.  Indeed, the tigers were commonly mistaken for EAB back when the ash-killer was on everyone's mind.  Of course, populations have crashed in much of Ohio as EAB has depleted its ash-food. 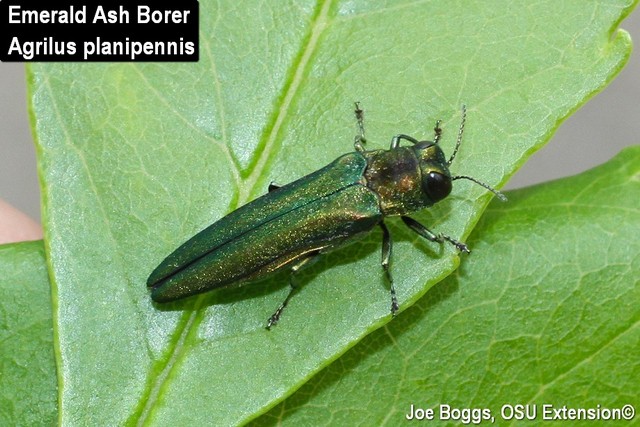 Regardless, it's too early in the season for EAB adults to be out-and-about.  EAB adult emergence occurs when the accumulated Growing Degree Days (GDD) reach 550.  The full bloom of black locusts (Robinia pseudoacacia) at 548 is a good phenological indicator.  We've only reached a GDD of 292 in Cincinnati.  The tiger beetles appear as temperatures warm in early spring and they remain active until early-to-mid summer.  After that, you'd need to dig into forest soils to find the larvae. 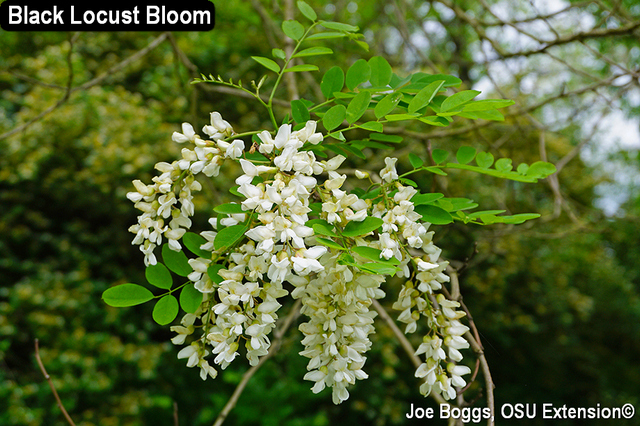 Locations are also very different between the tiger beetles and EAB.  The tigers have a curious affinity for hanging out and zipping around on woodland trails; large numbers can certainly liven up a hike.  EAB would only be caught dead laying on a forest trail. 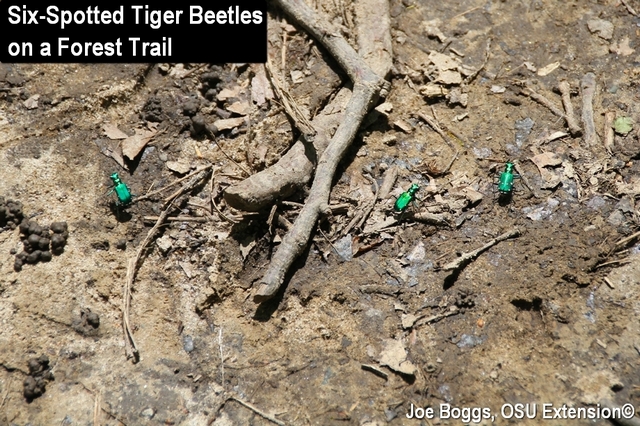 Both the common and scientific names for six-spotted tiger beetles are very descriptive.  "Cicindela" in Latin means "glowworm" and refers to flashes of sunlight bouncing off the beetle's highly reflective surfaces.  The specific epithet "sexguttata" joins the Latin for six (as in sextuplets) with the Latin guttata which means spotted, or speckled.  It's why this specific epithet is also used for the six-spot ground beetle (Anthia sexguttata); a carabid beetle found in Asia and the sixspot goby (Valencienna sexguttata); a fish native to the Indian Ocean and western Pacific that has six spots on its gill covers.  The spots on the six-spotted tiger beetle are arranged along the trailing edge of the wing covers, three spots per side. 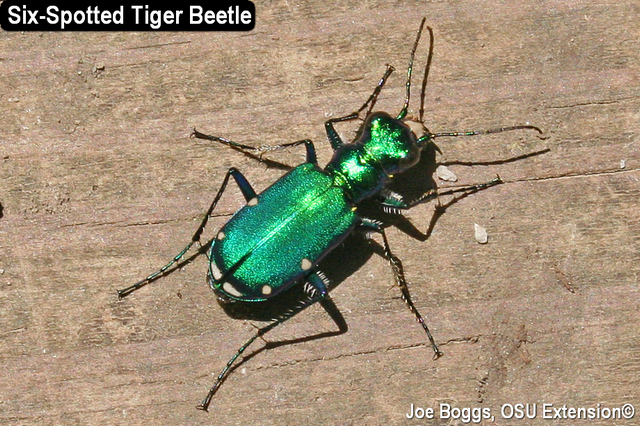 Tiger beetles (family Carabidae (Ground Beetles); subfamily Cicindelinae (Tiger Beetles)) are descriptively named.  They hunt, kill, and eat their arthropod prey; exactly like their larger feline namesake.  If you can get close enough, you'll see powerful sickle-shaped mandibles that are used to grab and dispatch luckless arthropod victims.  A word of caution:  these carnivores can also use their impressive mandibles to deliver a painful bite to the hand of the overly curious.

The overall color of the shiny six-spotted tiger beetles varies from deep emerald green to blue.  I've never photographed a blue-form and once believed it was a trick of the light with reflective shimmering shades fluctuating from deep emerald green to slightly bluish-green depending on the angle of the light.  However, there are enough images posted on reputable websites including bugguide.net that show blue colored six-spotted tiger beetles to convince me there it's a true color-form. 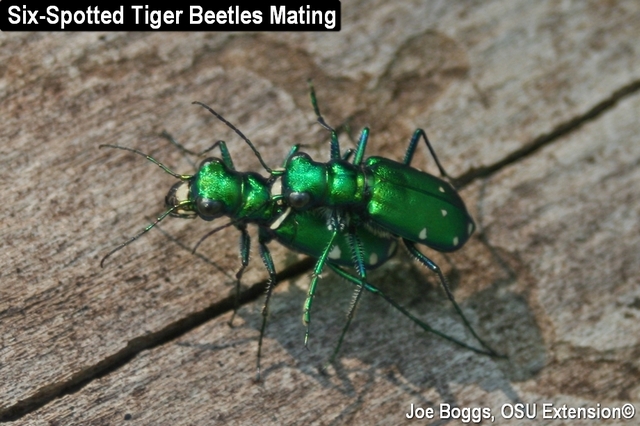 Six-spotted tiger beetles have excellent eyesight.  Their bulging black eyes (the better to see you with, my dear!) makes them look like they're wearing goggles.  I'm always amazed at how fast they can detect me before I detect them.  If you spot one on a forest trail, approach slowly and watch what it does.  Usually, it will spin around to face you.

If the little tiger gets too nervous, it may just use its long legs to scoot away a short distance; they are very fast runners.  They are also fast, agile flyers.  If things get too intense for the beetle, it will fly away.  Actually, it's more like zip away; it's like they just disappear.  I believe this accounts for the blurry images attached to the e-mail messages.  The tigers are difficult to photograph! 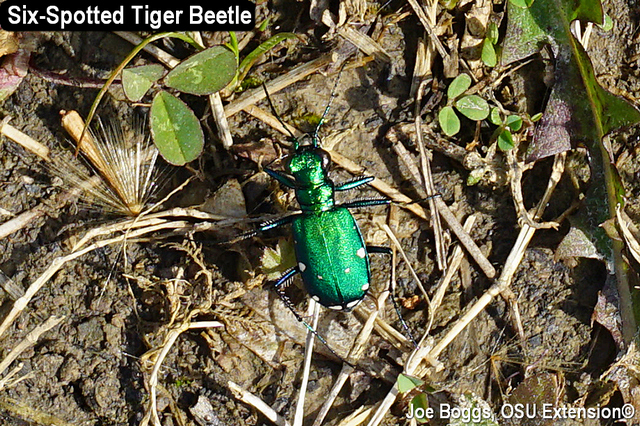 Six-spotted tiger beetle larvae are also predators.  However, instead of actively hunting their prey, they conceal themselves in vertical burrows in the soil to await hapless victims.  When a meat item such as insects or spiders walks past, the tiger larva springs forth like a jack-in-the-box to grab dinner with their powerful mandibles.

The bottom line is that six-spotted tiger beetles are highly effective and important predators throughout their life cycle.  So, keep your eyes peeled for and hands away from these tiny tigers prowling our woodland trails ... and don't kill them since they are good guys!